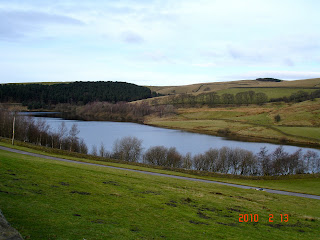 Saturday we headed off to Ogden near Newhay. We planned to do a circular walk from the small car park adjacent to Ogden reservoir at Grid ref SD 952 122. It was a nice day, not much sun though. We set off east following the track on the south side of the reservoirs and then took a right at Cold Greave and headed for the pub on the Ripponden road at Grid ref SD 977 119. 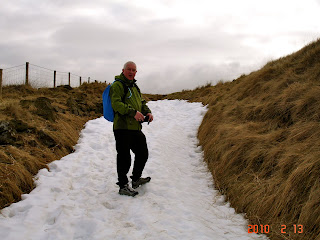 We closed our eyes as we passed the pub just in case we may have been tempted to go in. We turned left and headed up the road to the footpath to Readycon dean reservoir.

We followed this track east passing the reservoir which was still frozen. The wind was bitting.
Just as we rounded the end of the reservoir we noticed a large flock of noisy geese overhead going north. 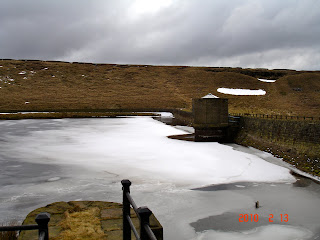 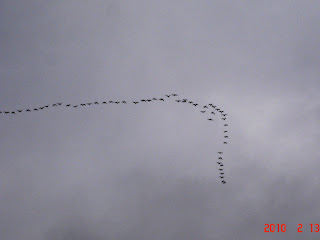 At the point where the path meets the Huddersfield road we took a left and in a few minutes joined up with the Pennine way at Grid ref SE 002 122.

The track up to White Hill 466m, Grid ref SD 990 131, was a real quagmire in places, typical of the Pennine way. The views from here were good in all directions. 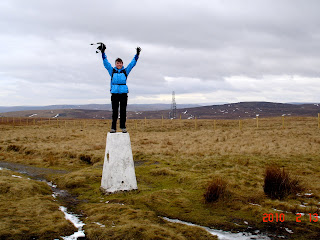 We could now see the mast at Windy hill which was our stopping place for lunch. Grid Ref SD 980 143.

The amount of rubbish people had dumped here was a real disappointment. There were TV's, tyres, furniture, general household rubbish. Obviously our recycling policy doesn't agree with everybody. Such a mess. 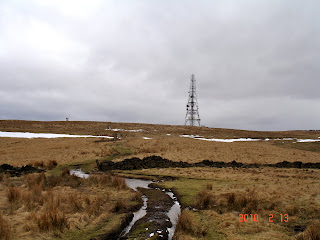 We didn't stop here for lunch but carried on a little further until we found some shelter from the wind.
From here we set off down Tunshill "green" lane and turned off at Grid ref SD 951 132 to Ogden reservoir and back to the car.

We  had a really good walk, not too far, only around 8.5/9 miles but my back was feeling ok and that was the main thing.
Posted by AlanR at 8:14 PM