The walk we did on Sat. 17th April was a circular route, starting and obviously finishing from Turner Hall camp site. It included White Maiden, White Pike and Caw. Last night was a very cold night and although no frost, i felt a wee bit cold in my Rab Summit 400 bag. 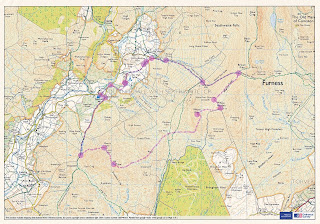 As we set off the day was cooler than yesterday and much more haze around. The Scafells  and the ridge around to Esk Pike was almost invisible and Harter fell was grey. The views became finer as we ascended the Walna Scar track towards the quarries. We passed a group of young lads who were sat down at the side of the track and they had huge sacks. A couple of them were so heavily laden i don't know how they carried it. 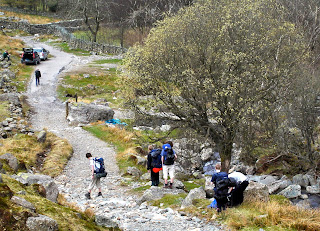 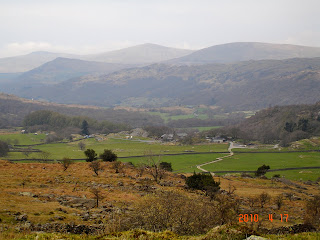 As we approached the Walna Quarry gate, a biker was just in front of us pedalling for all he was worth. It made us tired just watching how many revolutions of the pedals got him a further metre up the track.

We very soon reached the Duddon/Coniston watershed and there was quite a few people around as you would expect on a Saturday. The majority were heading up from the Coniston direction and then turning right to go up Brown Pike etc.
We had a 5 minute sit down and then put on an extra layer as the cold wind had picked up. 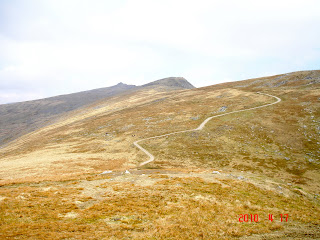 Our path was to the south, and led to White Maiden. There was quite a strong cold breeze and i was glad of the Montane litespeed to keep it out. As we started off for White Pike the skies darkened and i thought we were going to get a shower, but it was blown away. 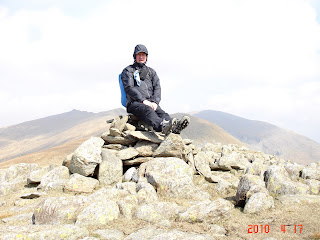 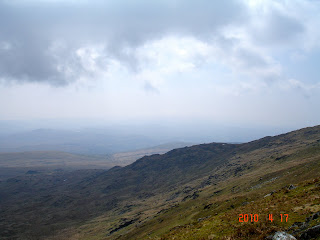 A quick stroll from White Maiden and you are at the cairn on White Pike. 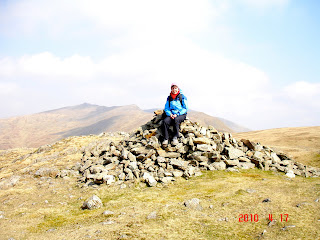 White Pike with Dow Crag in the distance.
It's a deceptive piece of rock White Pike. From ground level it looks an easy descent, but it can be quite dangerous especially in bad weather. There is no set route or footpath going south off the Pike and care should be taken.
The safest route is to head off in a SE direction and pick your way down the grassy slopes gradually turning S. We were heading onto Caw from here so we picked our way across the boggy ground towards the Pikes. 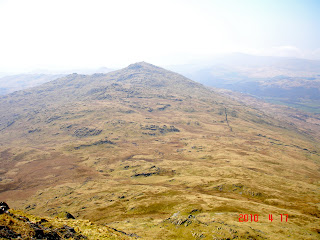 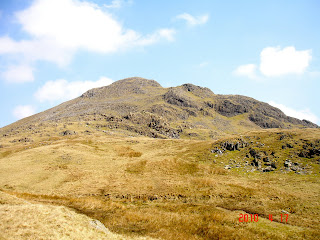 South edge of White Pike.
The distance from White Pike to Caw always seems to take much longer than it should but eventually we reached the Trig Point on Caw. 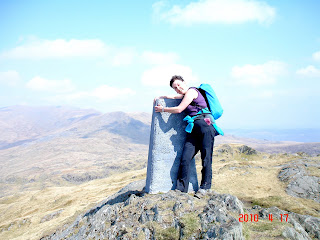 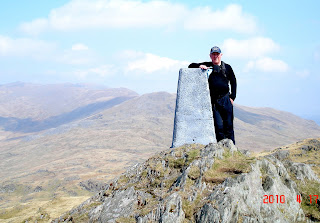 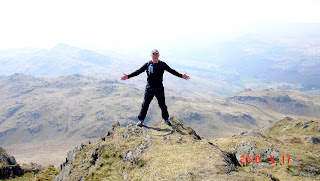 From Caw summit we headed off West to Caw quarries and we spent a few minutes having a look round the old building and mine shaft before following the good track down to the Park Head Road which in a mile or so leads to the Newfield Inn, where obviously you have to call in because it's open. 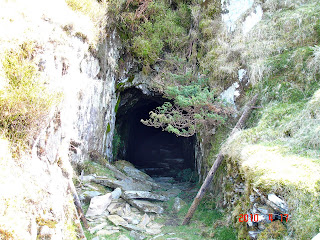 We enjoyed this walk and we had only met 2 adults and 2 children from getting to the top of the Walna track to the Newfield.
This walk was 11km distance and Ascent of 672m, although it seems  much more.
Posted by AlanR at 1:55 PM