Following on from my tests with the Gram Weenie stove on Monday 26th July.

After much searching i decided on the Evernew 600 from Backpacking light. No sooner had i placed the order when it arrived. So thanks to them for a speedy service.

I also decided that i was going to make a cone windshield which hopefully would improve heat transfer and therefore save time and fuel.

The shield.
Having now purchased the material which started life as a backing tray. I started to work out the sizes required and to make the template using the formula for the frustum. 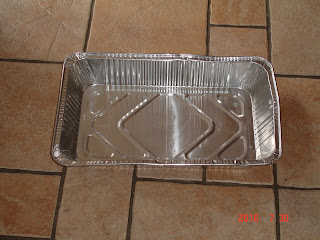 Then i made a paper template and set about cutting the basic shape. 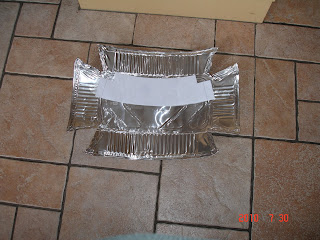 Once thats done its just a matter of putting some slots in to aid combustion and to decide on how best to join the ends together. 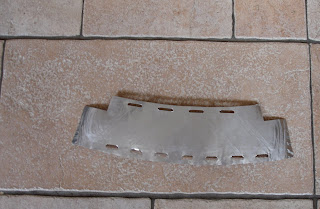 I decided after much experimentation to make a double grooved seam lock joint. With material so thin it's quite an easy joint to make and it's a secure lock which requires no separate pieces to loose in the field. 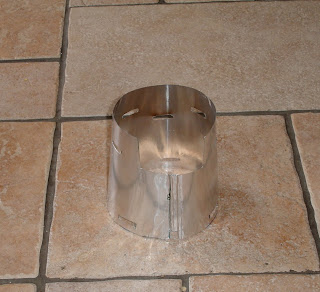 Now to test out the options with the new pan. 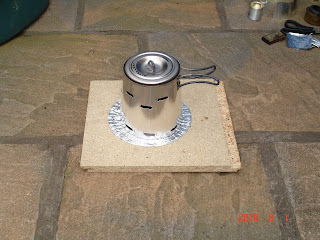 I used the Gram Weenie and my own make of Aluminium bottle stove, both which require the pan to sit on top of the stove to "Pressurize" it. I had to make separate bases for the stoves so that i could test them using the same windshield as the stove heights are different.

I was a little surprised to find that with both stoves there was an adverse effect.
It took longer to boil the 430 ml.
I new that titanium was not as good as aluminium for heat transfer but i wondered if the cone was lacking oxygen.
I put another 3 slots in the shield and tried again. Results were better but not as good as the tests done in July with the straight "open" shield.
I was disappointed to say the least that the results didn't improve performance.

I then tried my old Trangia burner with the set up and i got an improvement over previous trials.
The trangia is not a pressurized burner.
In previous tests i got it to boil 430ml of water in 6.00 mins. With the new set up it boiled it in 5 mins 15 seconds. A fair improvement and i was pleased that my endeavours were not in vain.

I can only assume that the pressurised burners require a lot more oxygen to combust efficiently than an open burner.
So armed with the results this photo shows the set up i will be using in colder months. 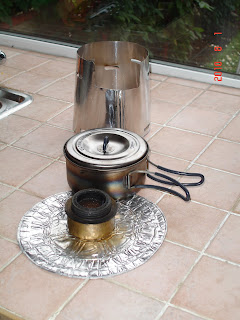 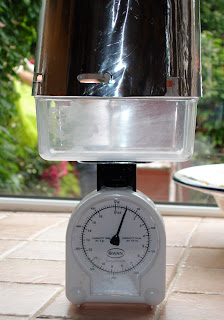 I then realised i could save 30 grams by deleting the original pan lid and make one from foil. 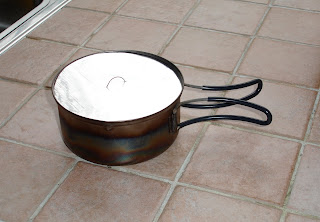 The shield can either be rolled up and packed or as i prefer it, can be left fully open and slid down the back of my sack where the water bladder goes. (I never use bladders so its an empty space in the sack.) 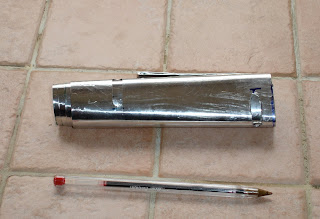 Well i have had fun making this and trying out different scenarios, and i am pleased that i found some improvements both in performance and weight saving. So it was a worthwhile exercise.
Posted by AlanR at 12:33 PM

This MYOG business is quite a bit of fun. I'm getting hold of some cuben fibre from a friend in the sailing industry to make some stuff sacks. I'm also cogitating over windshields but I'm thinking the Neo Air (or Z-Lite) has the potential to make a good windbreak and that's good dual-use philosophy. Otherwise, I may copy your stuff above.

My head is full of gear i want to make or just experiment with. It's just having the time to get it done.
I am going to have a go at another stove though soon.
I don't think i would use my neo air as a wind break though. In case it had an accident and foil windbreaks only weigh a few grams and cost nothing.