A few weeks ago i posted that i had been into the outdoor shop in Broughton in Furness and i noticed a sleeping mat by a company called Trang.
Well on our way back from Sheila's mums today we called in again to take a closer look.

We found out that the company is called Trango World but it used to be called Artiach. They are not well known in the UK but are big in Spain and other parts of europe.
They had a few mats in stock of varying sizes and weights but one in particular called the Skin Micro Lite caught our eye.
The mat size is 1.2m long x 0.5m wide x .03m thick. 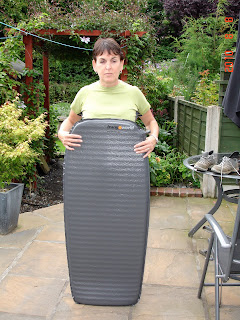 The mat is the self inflating type and it actually works. Unscrew the nozzle and it starts to inflate and with just 3 mouthfuls of air it was fully inflated.
The outer material feels good, not dissimilar to lightweight groundsheet material, it's called Artistretch.
The good thing is, it "sticks" to the groundsheet and it also resists the sleeping bag sliding.
This is excellent because we are always falling off the Neo air and sliding about.

This mat is the lightest that Trangoworld make and it weighs 370 grams. It's heavier than the Neo air but most mats are.
The thermal value is 3.4

When it's rolled up i was surprised to find just how small it was. I expected it to be quite large with the interior being foam filled. But as you can see from the photo's below it's acceptable. The shoe is a UK size 8. 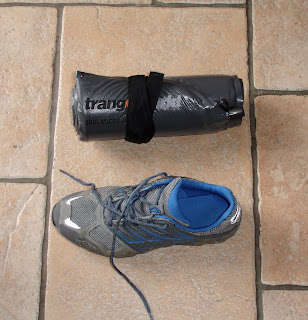 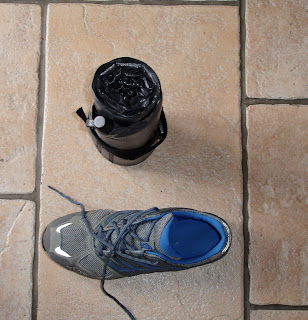 The best thing of all was the price. The RRP is £25! Fantastic value for money.
And because it was the last one in the shop before the new stock we got it for £22.

So when we have given it a try out, i think Sheila will be parting company with her Neo Air which she dislikes. Any takers please form an orderly queue.
Posted by AlanR at 5:54 PM

Seems too good to be true. Did you wake up and find it was all a dream?
My neo-air takes 28 manly puffs to inflate by the way. The problem is, if course, that I can never find the full 28 who are willing to blow down my tube....as it were.....

It's all true Mike.
I had never seen or even heard of this company before and i had never read anything about them in walking mags.
It looks the bee's knees. And at an affordable price. The bigger ones get a bit too heavy.
Our Neo Air are the small ones so we can usually get them up with about 15 puffs!

Mac E,
The shop is a bit of an Aladdin's cave. They seem to sell some gear that you don't see everyday in the larger stores.
It's the first mat i have seen that actually does inflates when the nozzle is unscrewed. Even my old fabric, heavy Thermarests don't do that.
And when you touch the material, you know it's going to stick to the groundsheet.
And as you say for a mat of this type the price and the weight is very good.
You know, i thought i had heard of Artiach too, but i it may be another similar name.

Looks a bit like my Alpkit Wee Airic although it doesn't self inflate as well as your new mat. It was cheap though at £17 a year ago.

Hi Gibson,
I tried to have a look at the Airic but it has been discontinued now. I had a look at the Airo 120 and the Base 120 that have replaced it, the Trango material is totally different to these models.
The Trango is like a thin neoprene. Thats the closest comparison i can make.
The Airic has some good reviews so you have yourself a good mat there. And at £17 there's no argument against it.

thats amazing how it folds up so small! you want to see ours it probably rolls up bigger than your tent, its a vango i think but it does not need any extra to make it inflate x

Lisa,
The Neo Air folds down smaller but Sheila finds that it makes her hips ache.
I find it ok though. The beer helps i think.

The Neo Air has been annoying me too and I bought a Z-Lite this week which I am looking forward to trying - it'll be the backsystem for my GG Gorilla so 8 sections will be lighter than the Neo Air and GG Sitlight pad combined and, hopefully, my knees will not be quite as aggravated from the "hang-off". It's oddly comfortable, the Z-Lite, but that's for 10mins - 6-7hrs is another matter...

Maz.
I have never tried the Z- Lite so it will be interesting to see how you go on with it. Is it bulky?

Looking for a featherweight mat that self inflates, and this still seems a bargain at 25 notes. Hope the 4 ft will suffice. Ray Jardine suggests using tissue paper to lie on... hmm, well nearly. May plump for this. The other ones are the PO uber lite (42 quid, but 240g and shaped like an insole - yes I said 'insole') or maybe the Vango 3/4 ultralite (23 quid but 430g)

Hi White Knight,
thanks for dropping by.
Sheila uses this instead of the Neo air. She just thinks its comfier and less painful on her hips.
There are not too many places that sell this in the uk but it is available.
If you order one make sure that you or the skin micro lite as the other models are very similar.

I'm a little late to this party, but I thought I'd share my experience with this pad...which is that I bought my 1st one almost 2 months ago. Immediately I fell in love with it; it was the most comfortable thing I'd ever slept on outside. However, when I sat up the 3rd morning, it burst or possibly snagged on the zipper of my bag. Disappointing, but these things happen, and Trangoworld warrantied it.

The 2nd mat wasn't quite as good as the first in that it leaked a little bit of air and my hip was often grazing the ground after an 8 hours sleep. Oh well. Last night I slept on it for probably the 10th time and woke up to another hole/completely deflated mat.

Bottom line is that it's very comfortable, but I would be EXTREMELY weary about taking this out on a multiday backpacking trip, or using it in colder climates.

Hi GuiriGuiri,
Thanks for your comment. All very interesting.
Sheila hasn't had any problems with hers fortunately.
Thats good that Trangoworld warrantied it. I notice that Ultralight outdoor gear are now retailing it.

We have used it for 7 nights on the run without any problems. Sheila weighs just under 9 stone. I don't know if weight has anything to do with it but there has never been any hint from our point of view of problems.

Update: they warrantied the pad a 2nd time and were nice enough to give me credit so that I could buy another product (from any brand) instead of having to try another pad. So I essentially traded it in for a grisgris and am very happy with their customer service.

Thats good hat they looked after you. I wonder if it's a batch problem. I know other users of the mat apart from us and no problems so far.