I noticed in Herald Scotland that a rare White throated needletail swift has been killed by a wind turbine on the Isle of Harris in the Outer Hebrides.
Many twitchers had flown to the island to catch a rare glimpse of this bird only to watch it die due to a wind turbine. 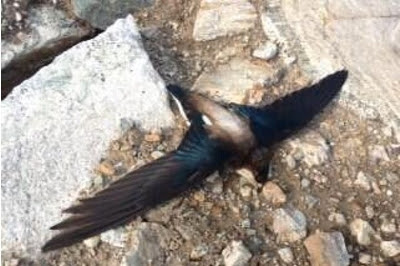 I found that sad enough but i was even more saddened by the last paragraph of the attached article where a spokeswoman for the RSPB defended the wind turbine.

"Wind energy makes a vital contribution towards mitigating the impacts of climate change, which is the biggest threat to our native birds and wildlife.”

So all the raptor deaths and other less rare birds is ok then because it doesn’t happen very often..

The said article can be found below. Just paste it into your browser.

Hi Alan. Very, very sad. The RSPB's response is disgusting but not surprising. We stopped our membership some years ago because of their stance on wind turbines.

Hi Gibson,
Yes very sad. It wasn’t just what she said but how it was worded. Like it was a pre-concieved political speech. To me it seemed like it was more important for her to mention the turbines than it was the death of the bird.

that is awful. so darned sad.