A walk up Harter Fell from Duddon Valley.

Saturday, we left Seathwaite (Duddon Valley), with full backpacks and full stomachs. A glorious sunny day and little wind. What clouds we could see were high and the blue sky was a pleasant change to the miserable grey of late. 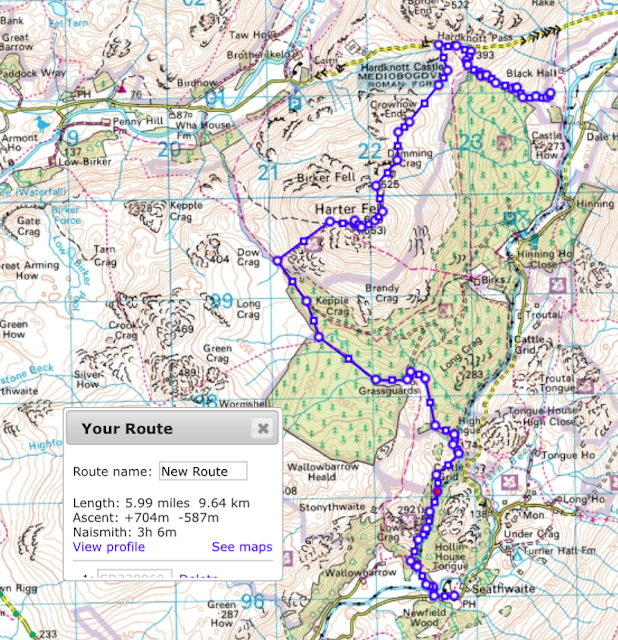 Our route took us back down the Seathwaite valley road a short distance before heading through a deciduous woodland and across the River Duddon by stepping stones. It was warm, very warm, the sun was blazing through the trees and made the large white rocks and fast flowing river sparkle.
Safely across to the other bank we headed up stream on a narrow but good path along the gorge where massive boulders have previously crashed down from high up on Wallowbarrow.

A high scree route can be taken through the gorge that has terrific viewpoints but we opted to stay on the river side path which gave us some shade. There were lots of spiders webs in the grass and the smell of Bog Myrtle was strong. Just after we crossed Grassguards Gill the track splits. You can carry on and follow the river or cross it at Fickle Steps or go left steeply up hill and follow Grassguards Gill, which is the path we took.

Height is quickly gained and is pleasant walking all the way to the ford at Grassguards Farm. Thankfully the not so friendly dogs have now gone. Here we got our first glimpse of Harter Fell top through the trees.
It was a pleasant surprise to find that the forestry has been completely cut back and now the wonderful landscape and crags and becks are visible again. Albeit with the mass of detritus left by the foresting operation.

The track forward is a public bridleway but it has been a complete mess for years. Bog has taken over what used to be a pleasant stony path but its good to see that some work has been started to reclaim the route. For the first 50 yds a shale raised bed has been laid and a sturdy platform bridge across the beck. The next kilometre is still a boggy mesh but is then back to shale below Kepple Crag right through to the end of the old forestry. I am not aware of who is doing the job but well done anyway.

Exiting the forestry gate we turned North and followed the fence line up. The path shown on the OS map must have been a guess, as the route is not the way on the ground. The contours however are the same and it is steep. Especially with a backpack.

A group of four people came into view and it wasn’t long before we caught them up. They didn’t have packs and chatting to them found out they were from the Scottish Highlands. Staying in the Woolpack in Eskdale.

Numerous stops were taken on the ascent which gave us a chance to look back over the peaks we walked with Martin back in April 2014.
Harter summit has 2 tops and one has a Trig Point at 649 metres. The higher pointy bit is 653 metres but is difficult to get on top of and certainly hard to put a trig point on it. There was no one around and we had the top to ourselves. The views were stunning, all 360 degrees. It was great to see the whole Scafell range completely clear. We took the opportunity and found a sheltered spot and sat for an hour soaking up the panorama.

Across from us lay Hardknott and our destination for an overnight camp was in the crags just before Hardknott pass. It was beautifully laid out in front of us and so we left the worn path and followed the skyline crags. I noticed that water was indeed scarce and i was a bit taken aback at the dried up becks. 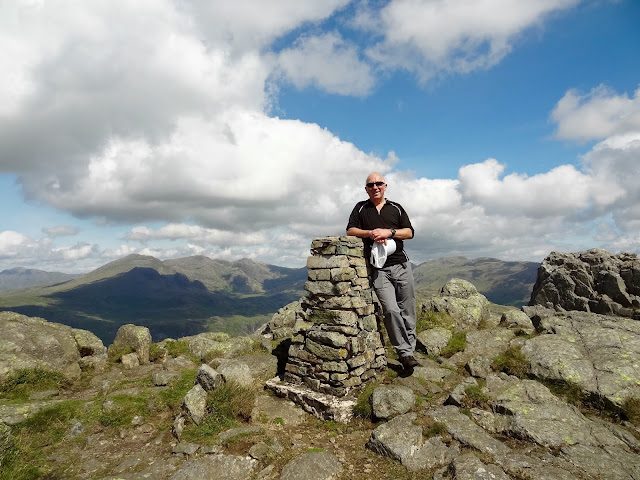 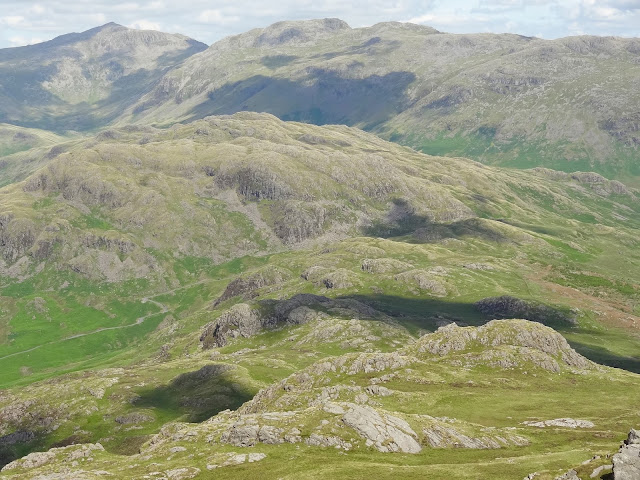 Dead centre of this shot is where we had planned to camp.

All the becks running North West were dry. We hit the road across the pass and even the beck there was dry. Following the road up to the summit we headed back to the two small tarns near Peathill Crags hoping that the outflows would be running but they weren’t. We had no alternative but headed down the track South East heading for Black Hall. I knew that the beck lower down would be running   and it was. The thing now was finding somewhere to camp as we were now in intake land which was well stocked with sheep. We sought permission to camp and were granted.

We had a great camp spot and not too far away from the stream. The farmers were busy collecting silage and were working well into the evening. The cloud began to roll in and from what had been a wonderful warm sunny day was changing fast. The temperature noticeably dropped and by 9.30pm it was raining. It was very fine rain and horizontal. We watched it sweeping down the valley. We watched the hills disappear. Our day was unfortunately over. What will tomorrow bring.

I have inserted a short slideshow of the day. Please click on the link HERE.

Looks like you had a cracking day, wonderful photos too. It looks like the sheep approve of your new tent!!!

Hi Dawn. Yes a cracking day. One of those rare ones this year. The sheep were so funny, they kept coming over in small groups and staring. We think they were looking at the Rams head logo on the tent.