Sunday, and it tested more than the tent.

Overnight the rain poured, with the tent being really taught the rain landing on it sounded great. We lay there and eventually dropped off to sleep. I was woken in the early hours to the wind being quite fierce and the tent door flapping noisily. I thought the door guy line may have come loose but it was still secure. So what was causing the flapping? It was too dark and too wet to get out and check. I pushed a *walking pole against the fabric and dropped back off to sleep.
It was a warm night and i kept peeling back the sleeping bag in an attempt to cool down. We had brought our light Rab bags but tonight they were just a bit too warm.

Daylight, 7.00am and its still windy and lashing down. Sheila looked out and we were completely clagged in. Couldn’t see a thing. I was then quite pleased that we had camped lower down.

We didn’t have to make a move and so we tried to get back to sleep for while. 9.30am came around and there was no change to the weather. We had spoken to a farmer on Friday and were told that Sunday would be a reasonable day with a few showers and improving. How wrong.

Boredom was setting in by now and so i decided we might as well make breakfast, coffee and porridge from the bag. No washing up you see.
10.00am It was still raining hard but the fog had lifted very slightly.We had to put plan B into action and so i discussed that we should stay low level, follow the River Duddon back down to Fickle Steps, cross over the stepping stones, which may be fun with the river running high and fast and then head to Turner Hall campsite.

Plan agreed we packed up everything inside the tent. No water ingress in the tent btw. We sat there fully clothed for the wet ahead, and said “right, lets go for it". Just as i got out of the tent and right on cue a big gust of wind hit the tent and i got an idea of what was causing the door flapping during the night. More to come on the tent when i do a field review, next post.

Quickly and very efficiently considering the conditions we dropped the tent and had it packed in about 4 minutes. Very impressed we were.
Heading for Black Hall and the approach path to the riverside the ground was very saturated which was not a surprise really.
I wondered, but said nothing, if at some point we would get cut off, maybe the river had flooded and we would have to make a detour back. 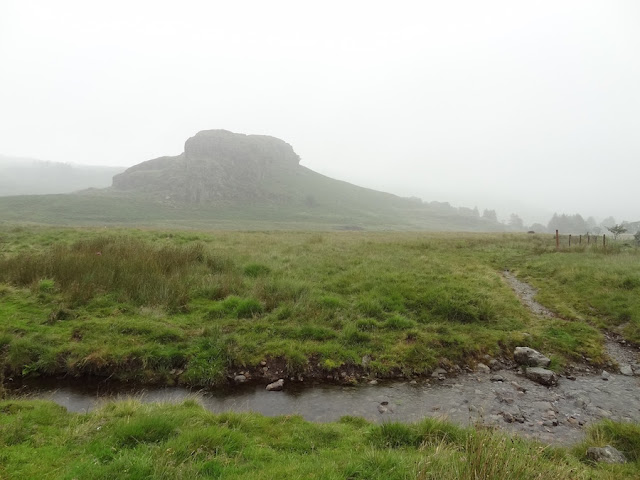 Castle How
The path between Black Hall and Castle How was passable with only the occasional minor detours to avoid the bigger deep pools. The side streams were flowing fast but strategically placed rocks made life a bit easier.
The path from Castle How to Froth Pot and the car park would have been better as a canoeing course.
It was deep and difficult and the grass and ferns high, this resulted in us being absolutely drenched.
Picking our way onto the higher clumps of grass took time and concentration. Eventually we got to the bridge and just laughed at how bad it was and that Plan B was right or maybe a Plan C should have been put into action. IE, use the road. 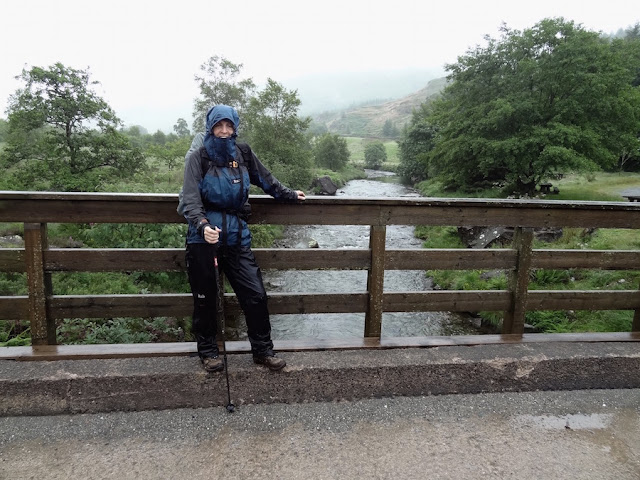 We new that our original intended high route would encounter very high ferns and that we would be soaked. It would be most unpleasant crossing Tarn Beck, that’s if we got there.

We had 5 minutes rest at the bridge and then carried on. The ferns were so high i managed to miss the path which leads to Birks Bridge but we ended up on the decent track to Birks farm. We didn’t have to retrace our steps but i wanted to stay on the river path. The river at Birks is always a delight and no more so than when in Spate. The rain was not easing at all but the hill fog had started to lift a few hundred metres. At least we were now getting a bit of a view. 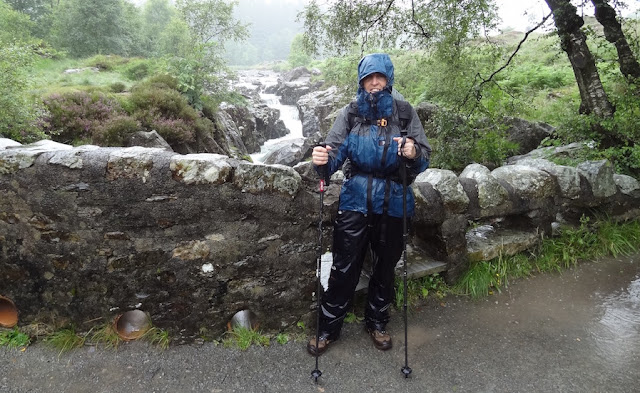 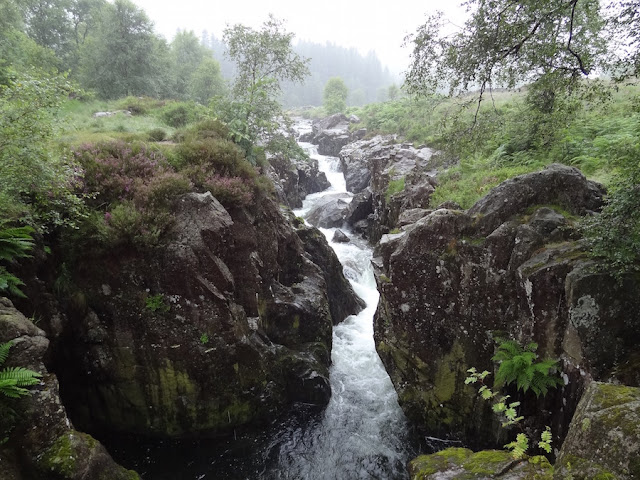 The river at Birks Bridge.
Continuing on the river path i again missed the turn off which leads through the Great Wood and climbs a high crag. Instead i blinkeredly stayed with the river which today was impassable. At a shear drop into a deep pool we turned back and i found the higher path. The ferns were above our heads and it made staying on the “path” a bit hit and miss. It was satcherated and along with the heavy rain soon overwhelmed both our waterproofs. Sheila was feeling very claustrophobic in the jungle of ferns and we were being attacked by thousands of Black Flies. They didn’t bite but they were all over our face and hands.
I must admit to being very pleased when we hit the narrow, steep but clear path which goes from Troutal to Birks farm.

Here at the bridge we decided Plan C was after all required. It was an easy decision. Cross the bridge which comes out at Troutal and hit the valley road. It was fantastic to be out of the wet foliage. No sooner had we set off when we stepped aside to let a tractor pass (it was a Case tractor btw), it was Kevin from Cockley Beck Farm. He stopped and said "we look like drowned rats”. 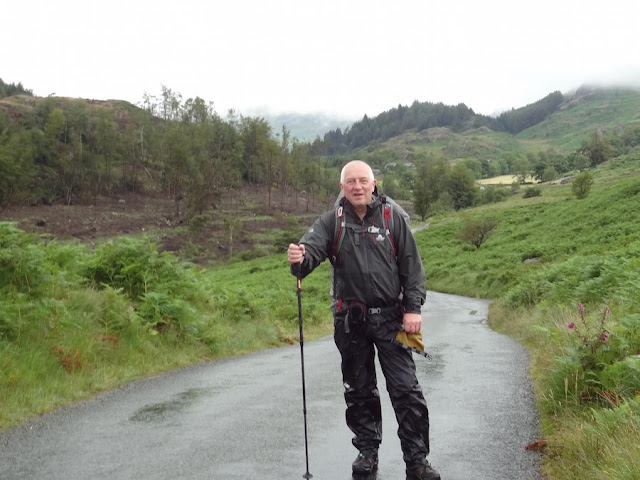 Walking the valley road is not boring and we could see all the waterfalls which were now gushing forth down the hillsides. The riverside path we were going to take had also been subject to mass tree harvesting and was not in good condition so hitting the road early had its compensations.

At 12.30 ish the rain stopped. We dared to take off our over trousers but to be honest we were so wet that it would hardly of mattered if it rained again. Another hour and we had our pitch set up on Turner Hall Farm. What would have on a good day taken about 2 hours tops had taken us 3 1/2 hours.
We had a coffee and then slept for about an hour before making lunch.

And then it started raining again which it did all night and into Monday morning. Sheila said “We must do this again Ha”.

*Walking Pole. As readers will know, we don’t use poles. However i bought a pair of carbon poles from Alpkit because i was on the verge of buying the Trekkertent Drift 2 tent and you need poles with it. As it turned out i bought the Kuiu tent instead and so was left with the carbon poles. I took them on this trip because the plan was to ford the Tarn beck and i thought a third leg would be useful. As it happened they proved to be very useful in a number of situations. 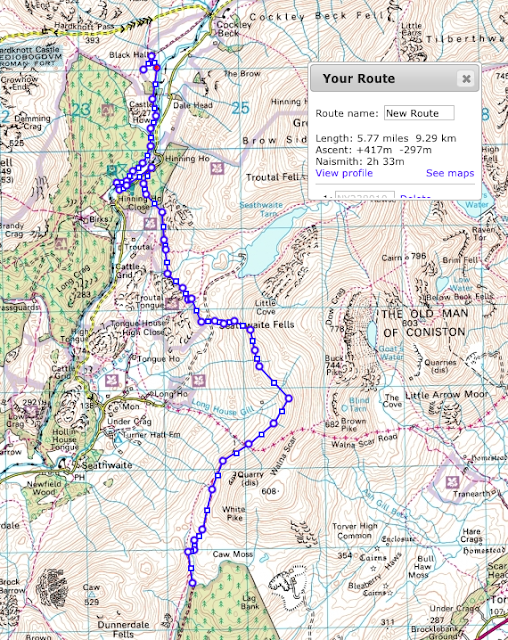 Our Plan A route. 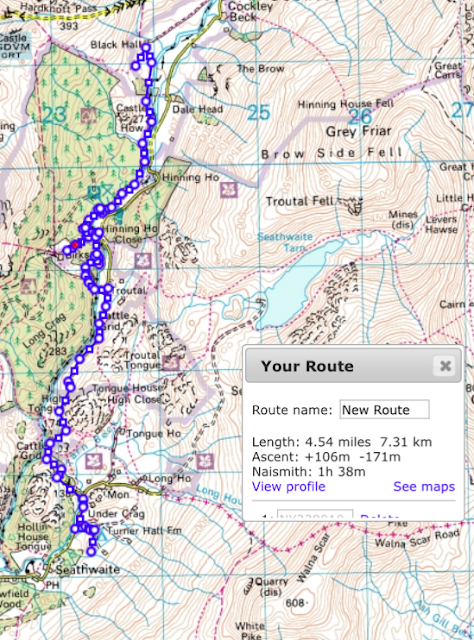 Our Plan B/C actual Route.

Gosh Alan, a proper baptism for the tent, mind, you still managed some cracking photos.

It sure was but thats why we went. We needed good tent testing weather and we got it in style. The photos were a miracle.

You bought a good sun shade there Martin.o