List of tops in order of ascent. (height in Metres)

I woke up every couple of hours. Going to bed so early means interrupted sleep. A call of nature had me out of the warmth of my PHD Minimus 500 bag and into snow, not blizzard conditions just flurries at 2.30am.

Got up again at 5.30 and waited to see if we were in for a decent sunrise, but no, the tops were still misty. The tent still covered in the white stuff.
With no rush required to get moving i went back to my pit. Sheila was checking the weather forecast whilst re-charging her iphone. It’s looking promising today she said. No rain, some cloud and 4 degrees. Like summer then i thought. Snore.

8.30 am i decided it was about coffee time. I was trying the Azera Americano coffee and it proved out to be a very nice option. Actually tasting like barista coffee rather than burned tobacco. This will be in my sack on the next outing for sure.
My usual breakfast is porridge in the bag and on this trip it’s no different except that i have now added some fruit mix to it and some chia seeds.

9.30 am and we are just about ready to go. During the night i had been thinking about the watercourse/path leading up to Calfhow Pike and how i didn’t fancy it. In a kind of blasé fashion i said to Sheila that we should give it up and go straight up the steep grassy slope of Clough Head instead.
She said “can we get over the beck” and i said yes, you just take your trousers off again.

As it happened the beck was easy to cross and no removal of clothing was necessary. I took a bearing, 302 degrees and suddenly the mist lifted and gave us a full 360 degree view, fantastic. The sun even appeared and lifted our spirits.

Clough Head 726 metres sure is steep from the east side but with a few stops to re-inflate the lungs we got up there. I was sweating like a pig whereas Sheila was perspiring a little. 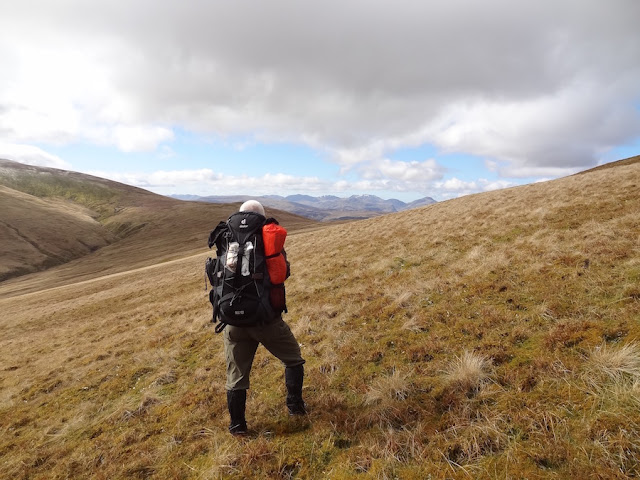 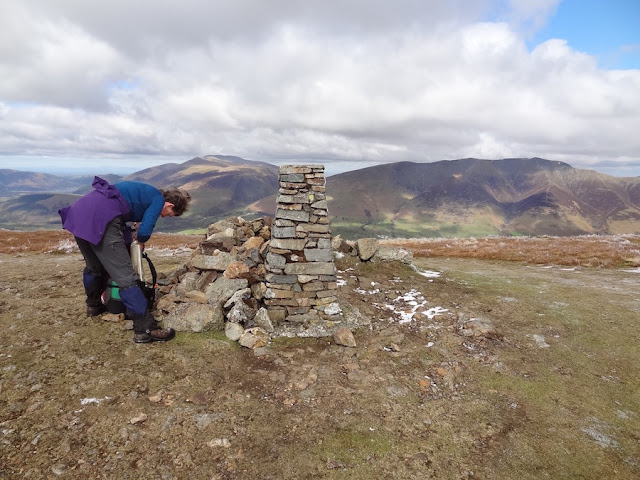 Sheila finds the oxygen bottle at the trig point on Clough Head.
Skiddaw and Blencathra in background.

What a view, i repeat, what a view. This has to be one of the best view points in Lakeland in my opinion. Yes there is higher but the panorama from Clough Head is awesome.

Panorama from Clough Head. (Click to enlarge - not that you needed telling)


We had to leave a great top, but now that we had cooled down it was pretty cold and blowy. Two paths leave the trig point, one heading down towards St. Johns and ours towards Calfhow Pike.
A runner was coming towards us as we closed in on the Pike. We stopped for a chat, he telling us its a bit boggy and he almost lost his running shoes. He had come from Patterdale and had taken one and a half hours. Thats good going i thought. Then off he went to Clough Head and back to us. I asked if he’d caught the bus. He was away to great Dodd in a flash.

Calfhow Pike is a rocky promontory in what are mainly grassy hills and stands at 660 metres. 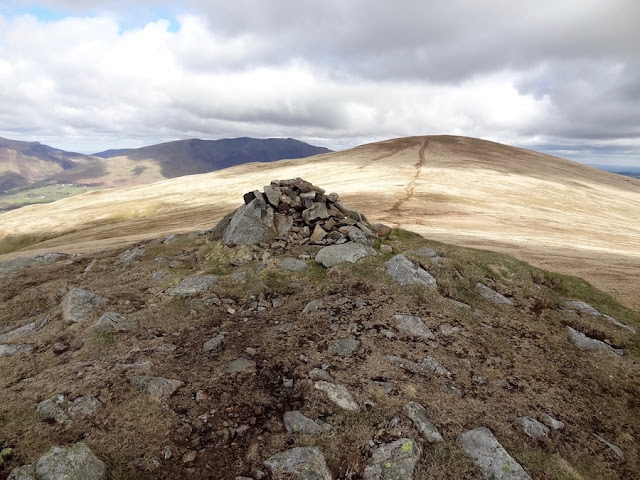 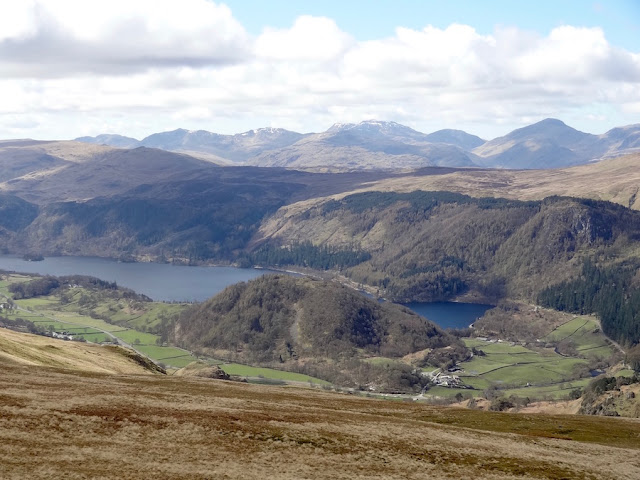 View of Thirlmere from Calfhow Pike with The Crinkles, Bowfell, Scafell, Great Gable in background.
Our next high points were Little and Great Dodd 785 metres and 857 metres respectively. A steep pull up in a fierce wind. It was cutting and ensured that we didn’t stop too long to admire the views. On Great Dodd there is a stone cairn and a shelter, we joined three others already in situ enjoying lunch.
We needed a brew and i set up the Caldera Cone with the 12-10 stove in what little shelter from the wind was being offered. I struggled to get the meths to light with the fire stick as the wind and the cold temperature of the meths was struggling to catch.
I tried a gas lighter but it wouldn’t fire up. Persevering with the fire stick and warming the 12-10 and meths inside my jacket for a couple of minutes i eventually got the meths to catch. In my opinion there is nothing better in adverse weather than the Caldera Cone system. I just need to remember to put my outdoor gas lighter in my sack for such emergencies.
We tend not to eat too much at lunch time, just a chocolate bar, some peanuts and  fruit will suffice. But we were very thankful to get a brew on this occassion.
People came and went from the shelter, only staying a couple of minutes. Then the snow started and it was horizontal. It didn’t last long, not enough to colour the ground but enough to colour the face. 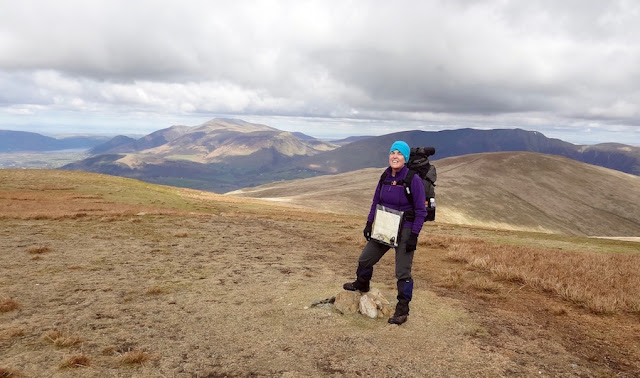 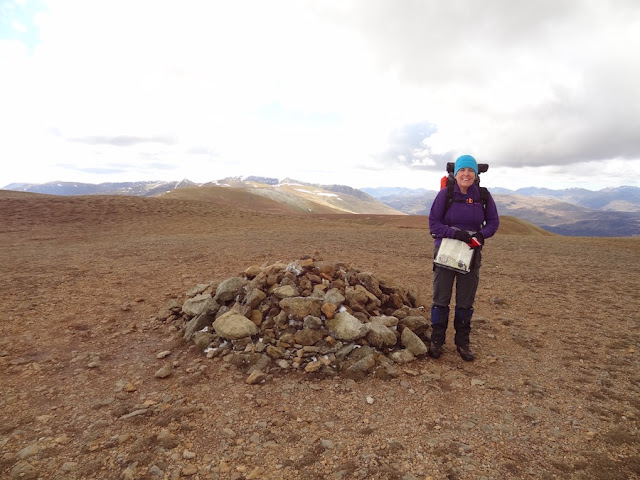 Cairn on Great Dodd, 857 metres, highest of the Dodds and highest point of this backpack. 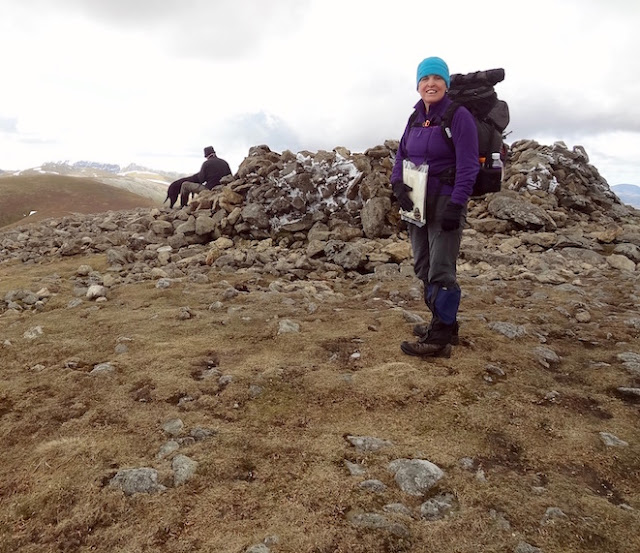 Shelter on Great Dodd.
It was time to quickly move on, passing walkers were doing just that, no place to stop and chat. Lots of stalactites were seen hanging from the peat groughs on the way to Watsons Dodd which again has splendid views. 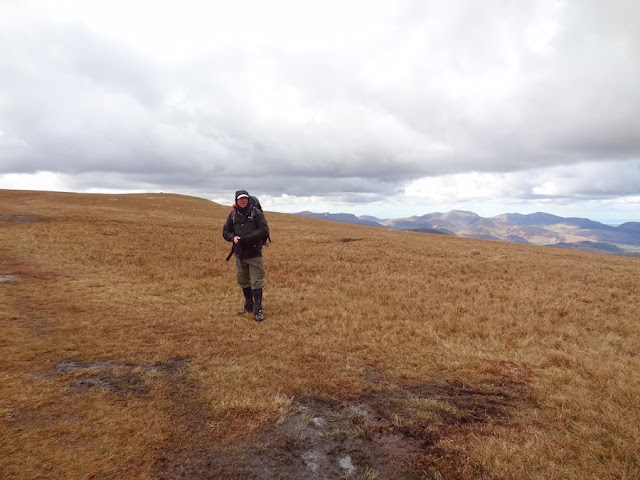 Watsons Dodd in the background. 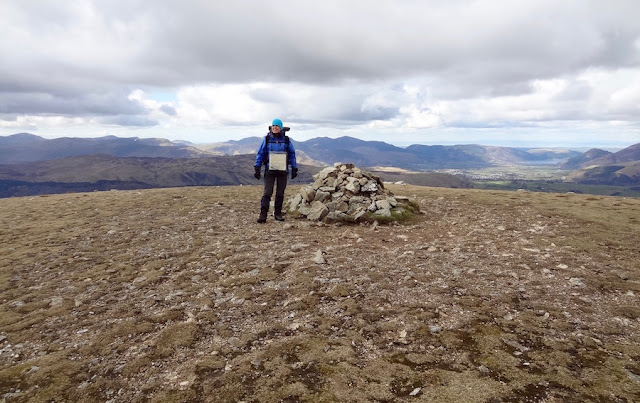 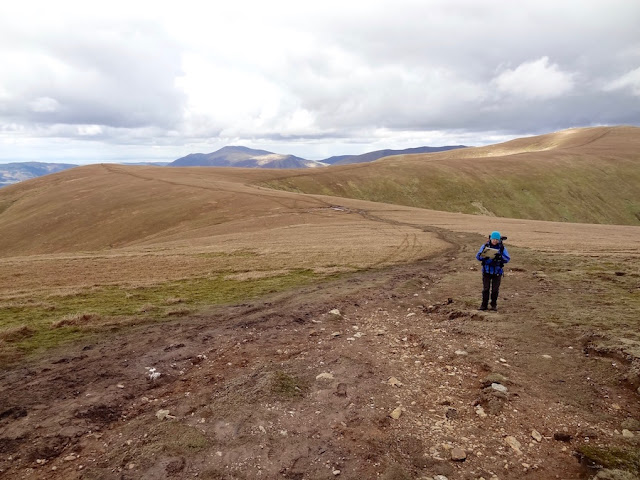 Sheila wondering if we are on the right motorway on route to Stybarrow Dodd.

At this point i realised that inadvertently through rushing to get into the shelter that we had missed out Randerside. We didn’t go back.
Stybarrow Dodd 843 metres was attained and it affords great views especially on it’s west side overlooking Stanahgill Head where some sheltered spots can be found to sit and take in those moments.
Our route from here left the main ridge path which eventually leads to Stake Pass and to Raise. We were going onto White Stones.
On the summit of Stybarrow Dodd you cannot see the track to White Stones and so i asked Sheila to take a bearing (practice you see as the path doglegs.) Better to practice in good weather than bad.

We had a bit of a calm 5 minutes on White Stones 795 metres and it felt good in the sun. It didn’t last.
Many cairns adorn White Stones for some reason and all a bit pointless although it is blatantly obvious how it got the name White Stones. Our next top was Hart Crag at 756 metres and prior to reaching our last top of the day Birkett Fell 725 metres, we visited the spot marked, unnamed bump at 740 metres. 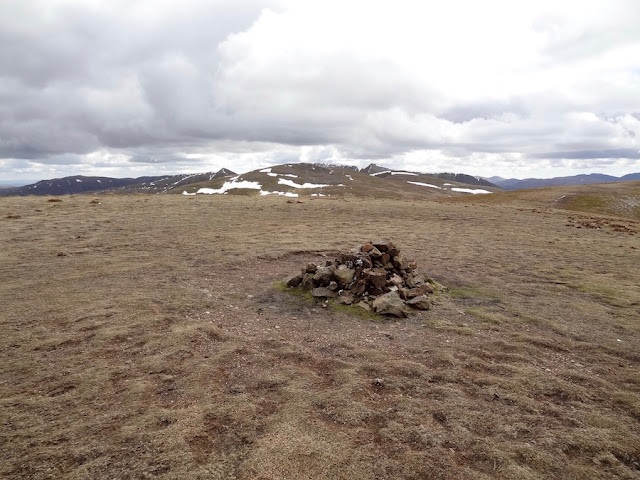 The rather non descript cairn on Stybarrow Dodd 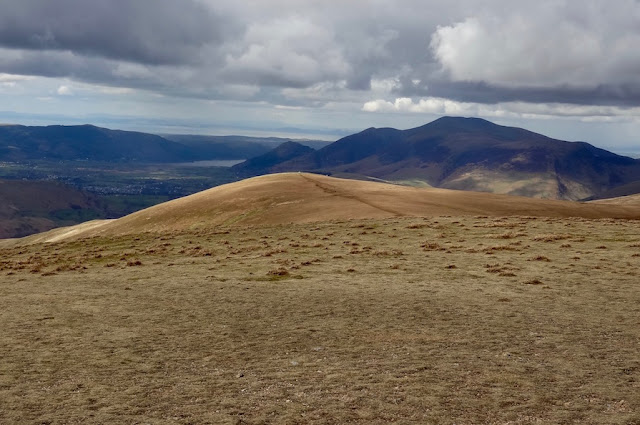 View from Stybarrow Dodd, across Blencathra to Bassenthwaite. Watsons Dodd in centre. 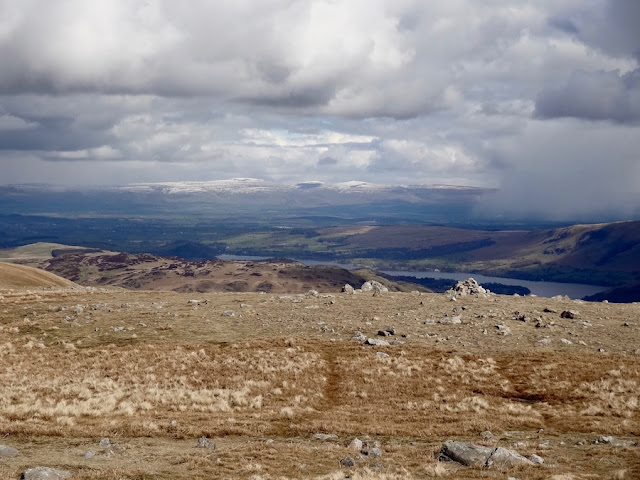 On White Stones, view across to snow covered Yorkshire. Ullswater below. 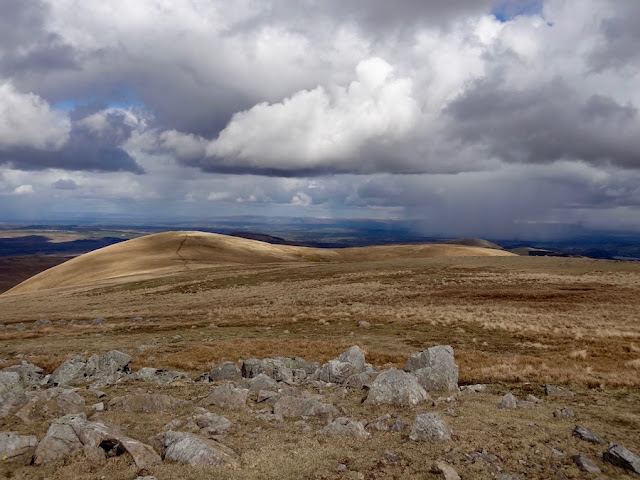 In the distance is Hart Crag from White Stones. 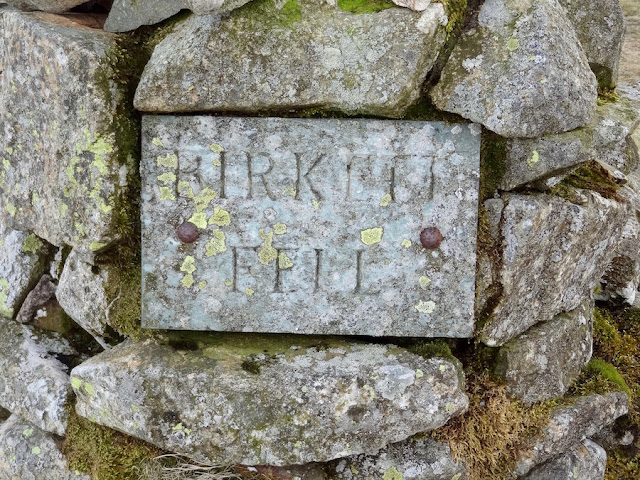 Cairn on you guessed it. Birkett Fell. 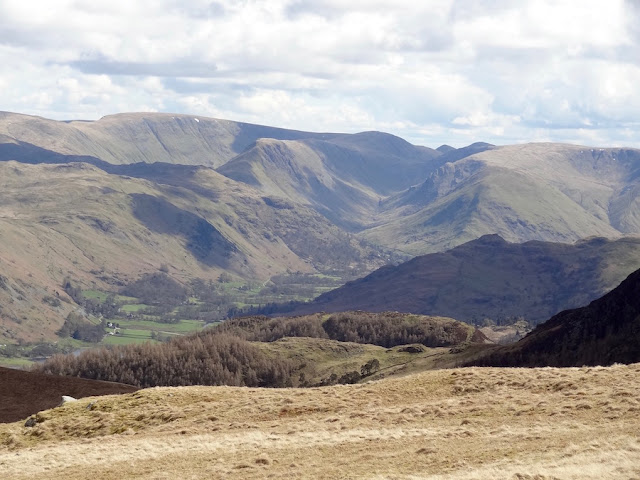 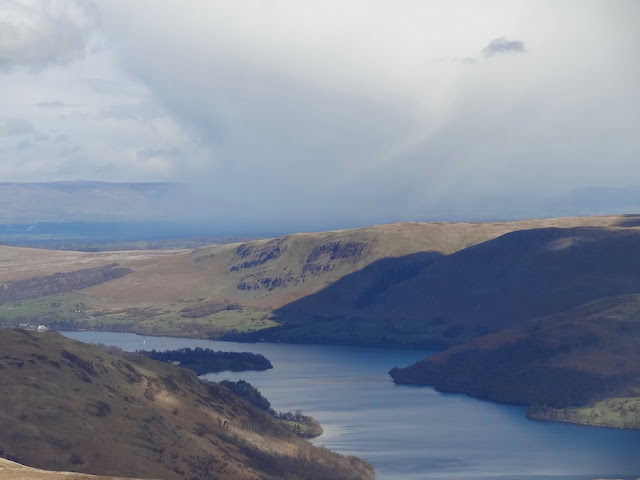 Snow coming in across Ullswater 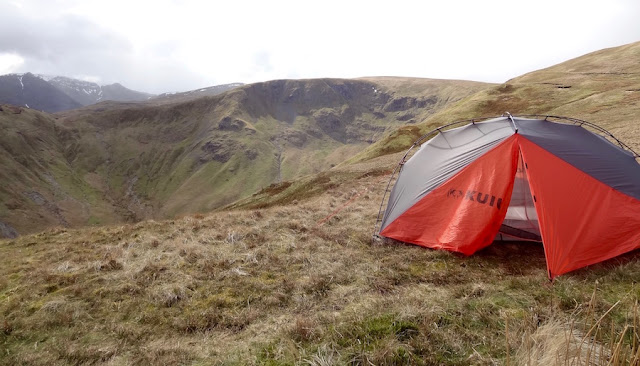 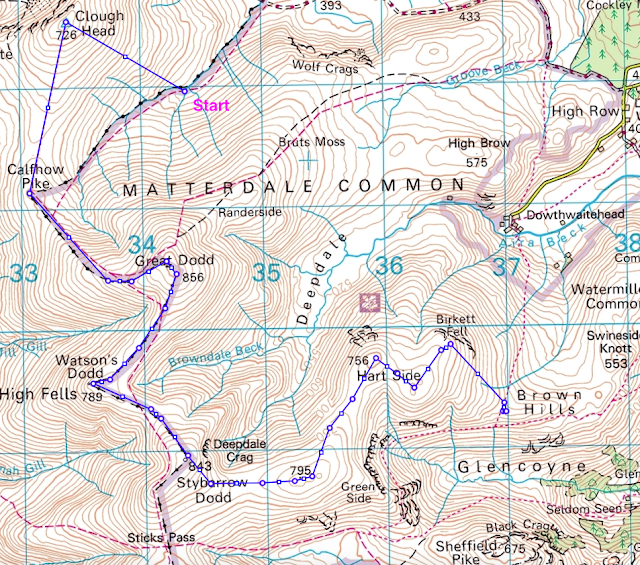 It looks like a great place for a walk with wonderful views. Looking forward to the next instalment.

Hi Roger. It was my first time in the Dodds as far as i can remember. Wonderful views and well worth the effort.

Great trip Alan and Sheila. The Dodds give a lovely high tramp I think though I've never backpacked them. I assume your back is fine now. Take care.

Some fantastic walking there Alan. The usual high calibre photos too.

Thanks Gibson. The trip was basically to find out how the back would stand up to backpacking and it is ok, touch wood. The Dodds are a compact area of lovely tops with many options of routes.

I don't remember there being as much erosion as shown on your photo on your way to Stybarrow Dodd. Looks a super pitch that.

That was the roughest bit by far. Considering the choice of a places to pitch were few and far between we consider finding it very lucky.

I'm working backwards here...
But I now get the gist of the trip!
Good to hear about your back.
:-)

Were there Sheila's cakes too? :-)

Fraid not. I have had to slap her legs.