A jolly trip into Cumbria. Part1.

We quickly got our gear together and got the hell out of Dodge while we still could. It had been such a long time since we had backpacked we struggled to find the exact kit we wanted. However we were off.
Train from home to Grange over Sands cost £9 each and dropped us at the station around 11.00 ish.
From Lancaster the rain had started and the hills were nowhere to be seen due to low mist. I was feeling a bit low, remembering the time I did a similar trip in 2017 when the weather was horrible and I had to change route. I really had hoped for good weather this time.
Full wet weather gear was donned at the station but we were only walking a short distance to a cafe for a coffee due to the fact that no refreshments were available on the train.

Our first milestone was the top of Hampsfell via Eggleslack Wood and was achieved without wearing waterproofs. The rain abated and the mist started to lift, we enjoyed the abundance of fungi on show. Having climbed up the wet steps of the Hospice on Hampsfell summit I lost my footing coming down and clobbered my wrist hard. Thankfully I hadn’t broken it but it remained sore for a few days. Over the coming days i noticed how poor the sole of my Ecco boots were on wet rock. 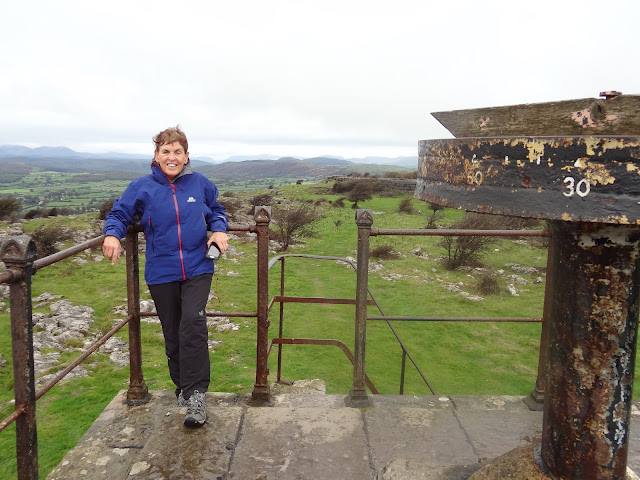 The Hospice on Hampsfell top. 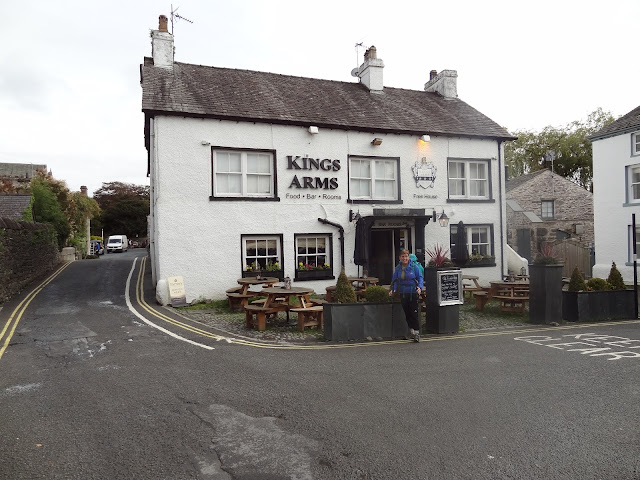 We quickly found our way down to Cartmel for lunch, walking through an inquisitive herd of cows on the way. It’s so expensive in Cartmel we wished we had just bought a sandwich from the shop in Grange. I should have remembered from last time. The place was dead, we only saw 6 people unlike previously in the summer time.
The footpath across the race course was open and it was a pleasant walk eventually joining a minor road to How Borrow.
From the trig point the views are fantastic in all directions and although the breeze had picked up and was a bit chilly we stayed awhile. After about 10 minutes a solo day hiker was making his way up so we descended leaving him to the peace. This was the first walker we had seen. 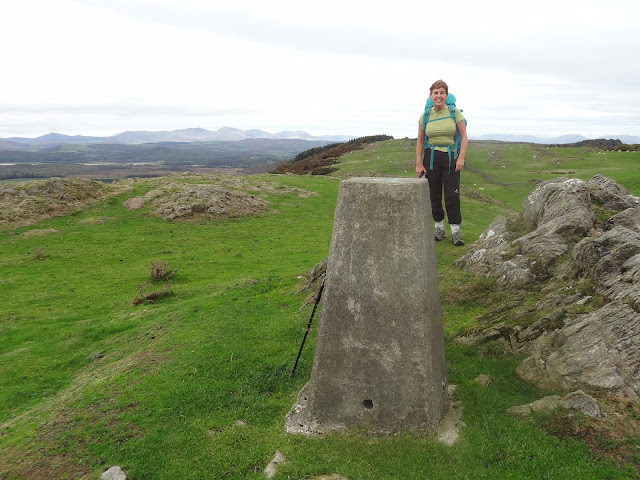 How Barrow with the Coniston fells in the background.

We were heading for Bigland horse riding stables where I had pre arranged to camp overnight. The route from the trig point to Bigland is a lovely walk through rolling agricultural land and forestry.
As we dropped down to cross a minor road at Grassgarth I felt a bit light headed and shaky. I had no idea why.
I knew it wasn’t far now to our stopping point so I said nothing to Sheila. We got to the stables and introduced ourselves. The paddock was a bit rough but the compensation of being able to use the lounge and showers and electricity made up for it.
We got the tent up and then what ever was causing my nausea came back with a vengeance. Sheila noticed I was white and shaking and I felt very close to fainting. I slept for a little while and then made the effort to get to the lounge for a sit down and had something to eat. 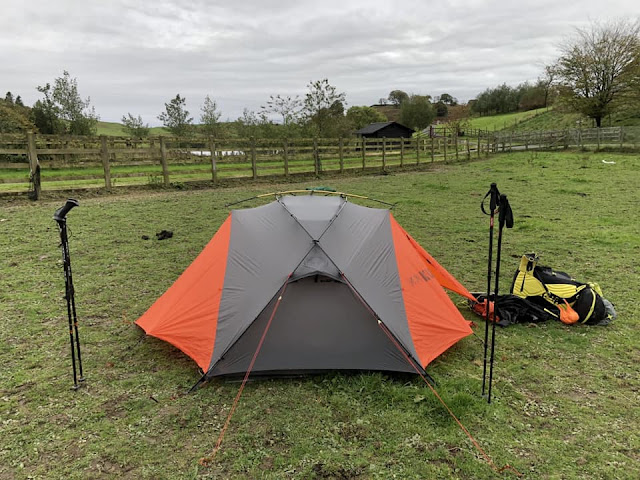 Pitch at Bigland equine centre.
Returning to the tent I just tried to sleep. It was dark when I awoke and it was around 9.30 pm. I was still feeling rough and took some settlers to help with the nausea. In my head I started to think about plan b and plan c etc. Nothing was clear cut, I wasn’t thinking straight.
Before I eventually dosed off I told Sheila that if I feel this bad in the morning we need to make a decision what to do.
It was a long night.
Next morning we had breakfast and I felt a little better. The day was a decent one weather wise and I had an inner determination to do the walk because it was this next stage I missed last time, due to the torrential rain. I said to Sheila that we should walk as far as Newby Bridge and make a decision there if to carry on or not. 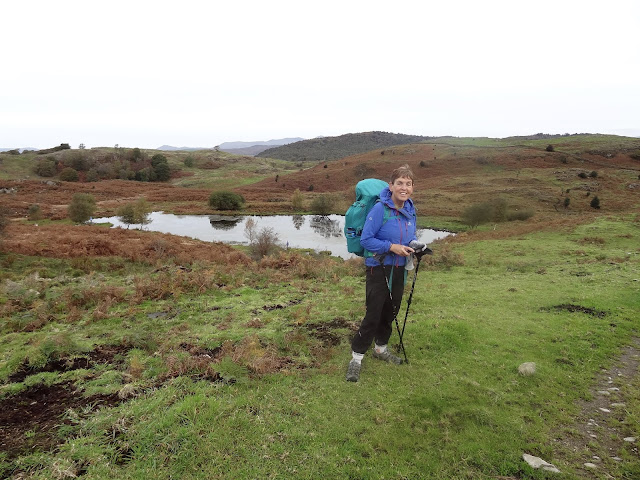 The nameless tarn or reservoir as its marked on the map. 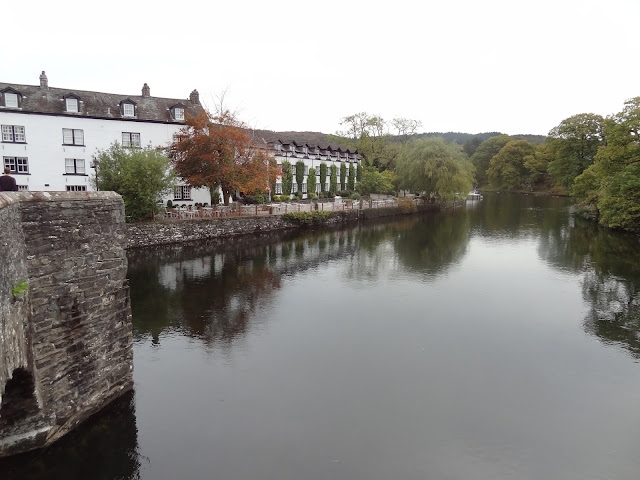 The Swan Hotel at Newby Bridge.

We slowly set off down hill and picked up our path across Low Brow Edge and into the woods called Bishops Allotment. The map here shows a dog leg path at SD 3617 8449 which we tried to find but it doesn’t exist, the path going NE just continues on.
Ten minutes later we were passing a small reservoir, nameless on the 1:25,000 map, we noticed a nice spot to camp and made a note of it.

Onward down a green lane and then a minor road we soon arrived at the Swan Inn, Newby Bridge. We sat down with a very reasonably priced coffee and discussed how I felt and what decision to make.
We are carrying on I said. I missed this bit last year and I am determined to do it now. I wasn’t feeling any worse so hopefully I can only improve as the day goes on.

We took the path left over the railway bridge which goes through Wintering Park and leads to Finsthwaite with its beautiful church and quiet village. Then around lovely High Dam picking up a path leadening eventually to Crosslands. I’d seen some of this route on Alistairs blog www.alsoutdoorworld.blogspot.com  and also on Conrad’s blog www.conradwalks.blogspot.com. It didn’t disappoint, it was a delightful walk and I was feeling much better too.
The sun came out which also brought out quite a few walkers and bikers. The views across to the Coniston mountains was just fantastic. I was so pleased to be here.
Just before reaching Crosslands we managed to be in the middle of a “shoot”. Many guys carrying shotguns and Pheasant for the pot. In the confusion we meandered off track but it didn’t make much difference to us, our path rejoined the route a little further on but it wasn't a public right of way. 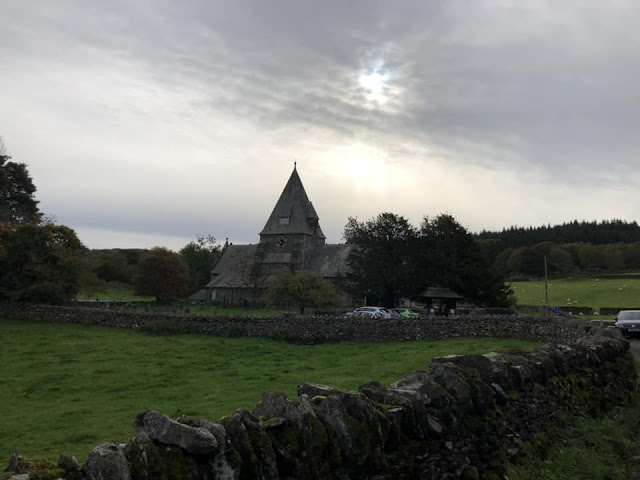 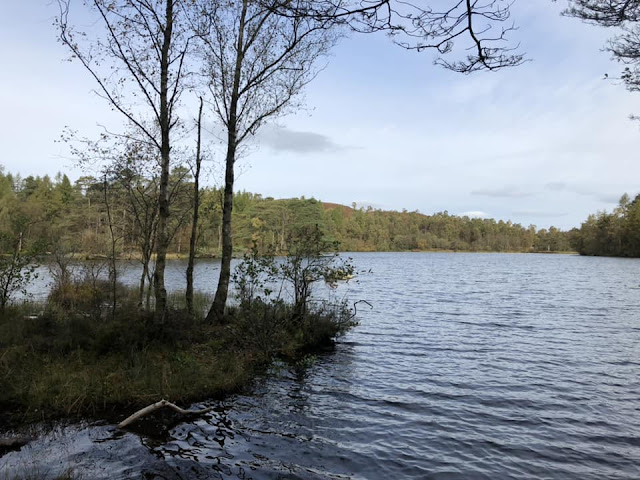 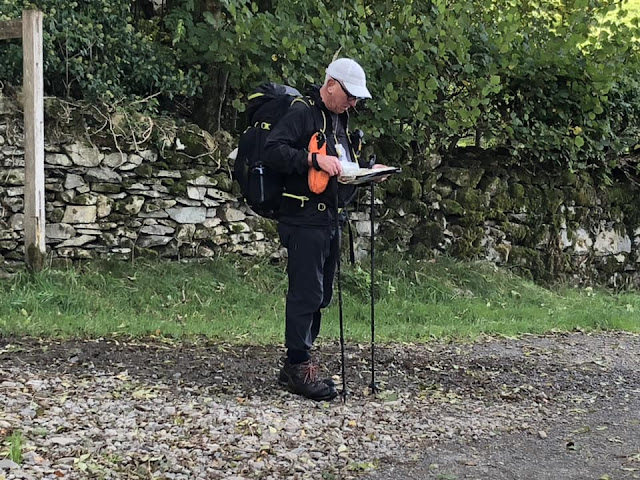 I think we are on this map. 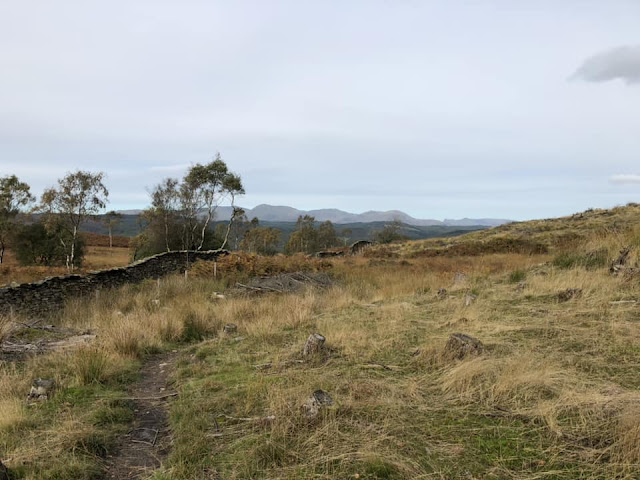 Reaching Rusland church the sun was warm and a low wall provided a good spot to have a late lunch.  A couple of visitors came up to have a look in the church, we said hello but were ignored. This became quite a feature of this whole walk, many people we said greetings to either ignored us or just grunted. We found the rudeness very strange. I said to Sheila how amazing it was that we have become invisible.
A good track leads from the Church road to Force Mills where we could hear the power of the water way before reaching the falls. A stiff march up the road soon brought us to Bowkerstead Farm and our overnight stop at the campsite.
Considering it was a Friday night we were surprised and pleased to find the site quiet. Having chosen a pitch with a bit of height just in case the forecasted rain appeared we showered and headed for the Eagles Head pub. 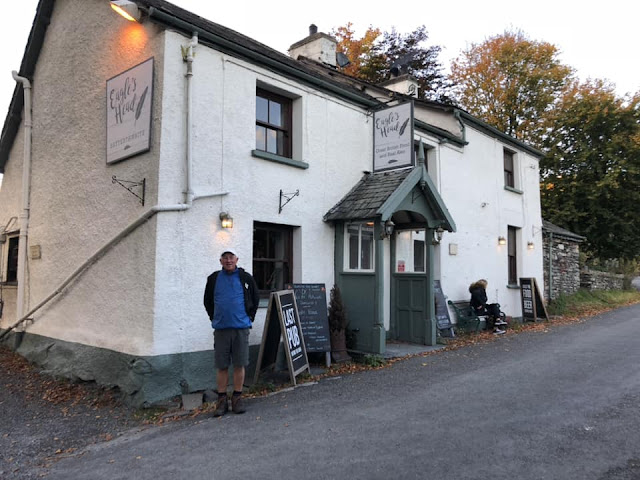 Evening meal booked at the Eagles Head, and it was superb.

The pub has new management, the prices have been reduced and there was a good atmosphere. We found the food, the service and staff to be excellent. We wish Gary well for the future.

As predicted it was now raining hard, just like it was the last time i was here. I was thankful that we had pitched slightly higher than the general height of the field and also that i was feeling a lot better than last night. It poured all night and we drifted off to sleep listening to the rain drumming on the fly sheet.
What could be better.

All very familiar and bringing back pleasant memories. Rusland Church has Arthur Ransome's grave - see my post, A Meeting with Arthur:

Force Mills gets a mention there as well - that is spectacular in flood conditions - I made a special trip there a while ago just to see it at its best - Bad Weather Induces Expensive Diversions:

and also Hampsfell - I could go on with several other relevant posts. I found out after visiting Hampsfell that tradition says one should ascend and descend from the tower without using the handrail - fortunately I was not aware of that at the time, otherwise I may not have been typing this comment!

Hi Conrad.
Yes, like I mentioned in the post, it was you that inspired some of the route. The Hospice steps can be dangerous in the wet as I found out and you certainly need the handrail on descent.

Hi Alan, A great read.
So glad you had a better do with the weather this time....when I read you were coming to Cumbria I did get my brolly and waterproofs ready!! :-))
Looking forward to the next instalment.
Alistair

Hi Al, we did have some bad weather and some very very good weather too. Luckily the bad stuff didn’t cause us a problem. The route over is excellent. Pt 2 ASAP.

No idea what it was Dawn, it just came, made me ill for 48 hours and then went. It is a nice walk and can be done a lot quicker than we did it if needed. We were in no hurry and enjoyed the surroundings.

Good to see you enjoying a bit of backpacking Alan, and Sheila making the most of retirement.

Looks a lovely varied walk Alan. Next instalment please. Oh, and why is Cartmel so expensive?

Cheers Martin. It’s difficult to stop Sheila at the moment.

Hi Gibson. Trying my best with Pt 2.
Cartmel is expensive because it’s a small place with a large magnet. The abbey, the horse racing to name 2. Little competition so they can charge what they like. They should all wear masks.