Forest of Bowland walk from Browsholme.

We decided to have a couple of days away and try to make a start at going somewhere new with a walk included. A bit of a plan, if an easy one.
We didn't want to go far, so after a few days on the internet we decided to go clamping. A midway point between camping and a hotel room. We booked a pod at Browsholme Hall, pronounced "Brusum". 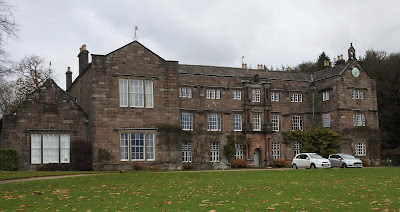 The hall is a spectacular building open to the public during the summer but unfortunately its closed now for the winter. It's been in the Parker family for over 500 years and they still have it. Quite amazing when you consider the history that it has seen.

There are 10 pods and we were the only folk there. It was our first go at Glamping and though these were quite expensive pods in comparison to others we had read about, they were very comfortable.

The grounds of the hall are extensive and we asked about walking round them and were told we could go anywhere. We only had a couple of hours daylight left so we made the most of it.

In the evening, without a TV and internet we looked at the map and chose a route to walk. I was still a little anxious which is strange because I knew this was an easy plan but its all part of the re-training.

It was cold overnight but the morning was clear and windless. We set off straight from the pod, walking north from Browsholme Farm and up hill towards Spire Farm. Every now and then we would stop and look back, there are good views across to Blackburn and Preston. The tops of the hills were a bit misty and cloud inversions covered the valleys.

We were on a good path, well that was until we got to a small marshy pond, south of Spire when it all changed. All the way to Spire was a mud fest, knee deep in parts, boggy, tussocks of bog weed and it was hard work.
Spire is a strange building, I think it belongs to the Browsholme Estate, it has a castellated tower, a bell, and sun and moon symbols in the gable end. What it was built for I'm not sure. The local story is that it had something to do with hunting on the moor in bad weather, so you could find your way. 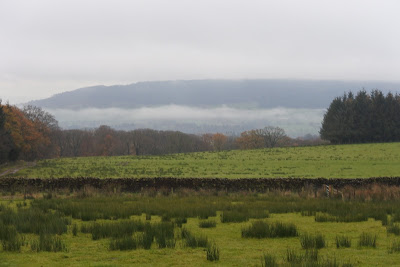 Looking back towards where we started.  The aptly named Longridge in the distance. 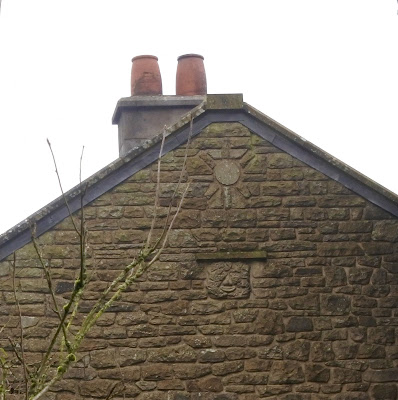 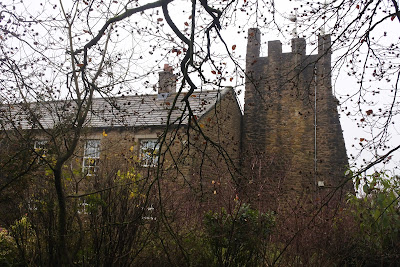 Reaching solid ground of the farm access road we headed for the trig point. Unusual again, it had a Lancashire Rose on all sides. We had to retrace our steps back towards the farm to pick up the footpath going north and heading to the moorland road near Crimpton. 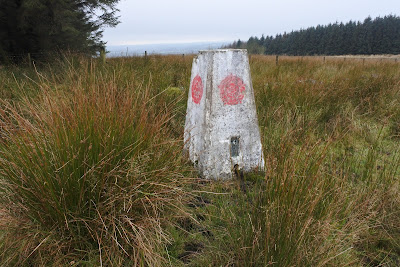 With hindsight we didn't need to retrace or steps really because there was no path, just more bog and mud. Entering a small coppice and following a stream to the road the ground was just like a black sponge, reminiscent of kinder scout. It was awful and on numerous occasions we went right down in the goo. Luckily we kept our footwear on.

At the road we met a couple of walkers heading onto the moor towards Crag Stones. They enquired about the path conditions we had been on, they said its always been bad and the path past Crimpton was no better. At that point I was in a laughing mood.

There is a path diversion around Crimpton Farm which also does B and B although it isn't advertised for some reason. The path was ok and the views were good on an improving day.
Beyond the farm a stile gives entry to woodland and it was here that the path deteriorated again to great swaths of downed trees and deep muddy holes. I was glad to get out of the woods and over another stile into an open field but just as squelchy. 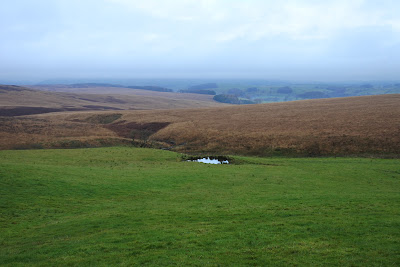 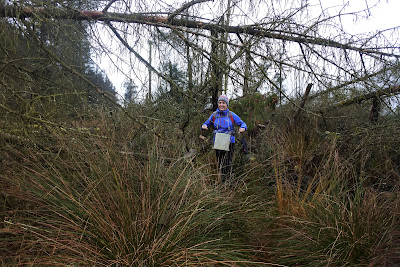 The footpath beyond Crimpton.

A large rambling group was encountered at the stile near Raven Scar plantation. We waited until they all cleared then made our own way through. The route crossed the road and headed down to the Inn at Whitewell, a fantastic old inn with wonderful food but not cheap, you get what you pay for though. We headed upward past an old quarry and what looked like a lime kiln. The views had improved so much and all the tops were now clear as was the whole of the Hodder Valley. 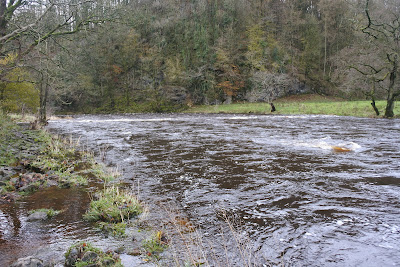 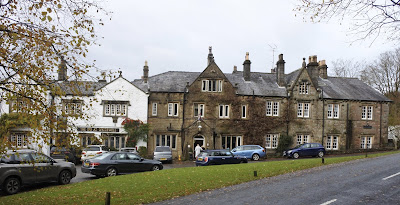 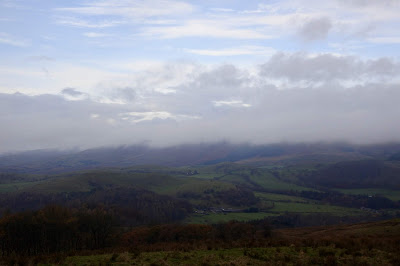 Looking back down to Whitewell
Another muddy route brought us to Higher Top Barn with its expensive ornate gates and stiles. There were many pheasants here as there are all over this area. We found a place on the wall to sit down and have a coffee and took in the scenery for 10 minutes. This place must have been owned by a rich landowner years ago. Probably the barn belongs to the farm Radholme Laund which is steeped in history, hunting, forestry etc. 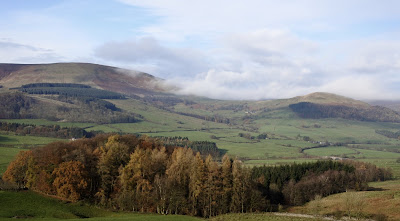 Looking over to Totteridge. 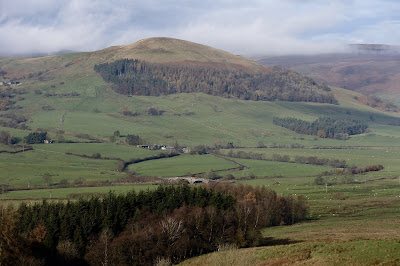 Burholme Bridge with Mellor Knoll beyond. 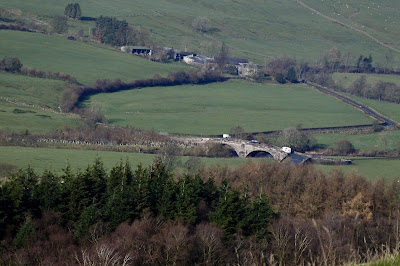 Zoom shot of the bridge 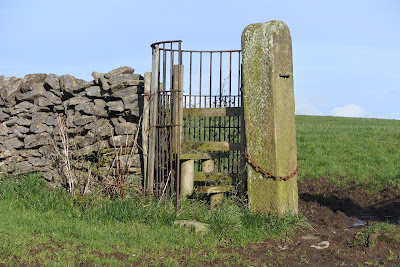 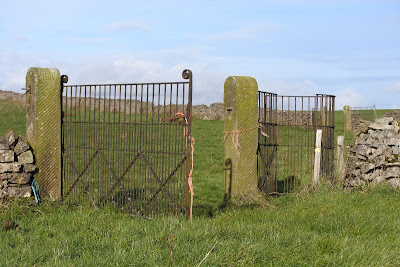 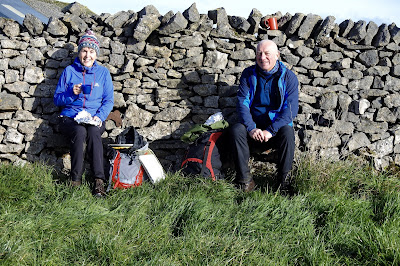 As we dropped down hill towards the farm I decided I had done enough and cut short our route. I checked the map and although the farm access road is not a public footpath we decided it was the quickest way back and so set off.
Just as we reached the end of the track the farmer stopped in his land rover, wound down his window and asked if we were lost as his road was not a public right of way. I apologised and said that we were not lost but knackered and took the quickest and easiest way back to Browsholme. He had a good laugh and chatted to us for about 5 minutes about the clamping pods and about access and camping in the area. (There's no camping around here).

Once back at the pod I think I slept most of the late afternoon. The walk was only about 10km but it was tiring walking in knee deep mud and heavy wet grass.
It was good to be out all the same. Onwards and upwards.

Awful paths marked A to B and C to D on the map. 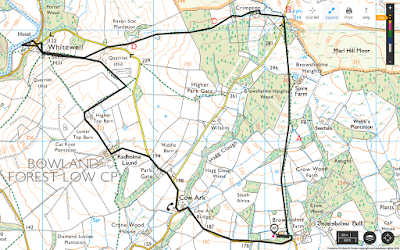 Hi Alan
Glad to hear you've been out and about....those boggy paths sound like "character building stuff"!
The Inn at Whitewell has certainly an excellent reputation...if a little spendy as you say.
Tek care
Alistair

Thanks Alistair. The Inn is pricey but what you get is worth the extra. Considering all the rain we had lately I’m not surprised the mud was bad, but the fallen trees had not been cleared for ages. We will be doing another short adventure this week.

Good to see you out and about. That is familiar territory - BC and I passed by The Inn at Whitewell on our Wainwright's Way walk recently. Pods sound like a good idea - I don't think camping at this time of year would be much fun unless you. were prepared to carry a wood-burning stove in your rucksack.

Hi Conrad. Thanks. It is a lovely area but it’s fault is there are very few places to camp in the valleys. Most of the limited camping sites are on the periphery of the Trough. There are numerous caravan sites but they won’t allow tents, not even 1 single overnighter. I rang round trying to book pitches for the Red Rose trail but failed miserably. I don’t understand why bother making a long distance trail where the accommodation/camping is either nil or prohibitively expensive.
I do enjoy winter camping and my record is minus 25C, we didn’t carry a stove but had the gear to cope.

Hi Alan. It's really good to see you on a trip again and blogging about it as well. 'Camping' sites up here are, with notable exceptions, increasingly refusing to take tents though I think it's rare anyone on foot is refused a pitch.

Hi Gibson, Thanks.
We are trying to get things more back to normal. Little and often is the way forward. Stamina is still an issue, my muscles ache all the time and that is due to the signals the muscles receive from the brain when they go out of the comfort zone. its all about retraining. I know it will take a while but we will beat it.
The good thing about Scotland is you can pretty much camp anywhere within reason but I wonder why tent campsites are becoming rarer. OS maps are now misleading when they show a tent symbol, it doesn't mean the site will allow tents. Every caravan parks are misleading because many still class themselves as campsites. Its a bit of a worry when planning long walking trips in UK.

Good to see you out and about again and enjoying a good splodge! (Commented on the wrong posting- duh.)

Its ok by me Martin.

Yes Alan, the brain is everything. Look after it!