I didn't have a particular good night, so I wasn't in a great frame of mind. I more or less skipped breakfast, having just a few cornflakes and a small fruit salad. Although there was a full English Breakfast on offer I gave it a miss. Not like me at all.

Yesterday I bought a pair of Topo Hydroventure 2 trail shoes from Castleberg Outdoors in Settle Village, a specialist outdoor retailer of some 32 years. They have a terrific range of shoes and boots as well as much more and leaves the "bigger" shops of Manchester standing and I was pleased with the service and expertise given by Catherine.

Armed with my new shoes on, we set off on a walk which would give me a good first impression of their performance. It was a cold windy day but dry if a little dull and overcast.

The first 500 metres or so was on public highway, hard underfoot. Sometimes with deep lugs on trail shoes you can feel every step but these were fine with good grip as well.

We passed underneath the railway bridge and turned towards the river when we reached Runley Mill. The mill is now converted into houses but you can still see signs of its previous life which goes back centuries. It was mentioned in the Doomsday Book. There was a lovely Border Collie sat astride a quad bike looking like it was riding it. Her name was Jess and very friendly. 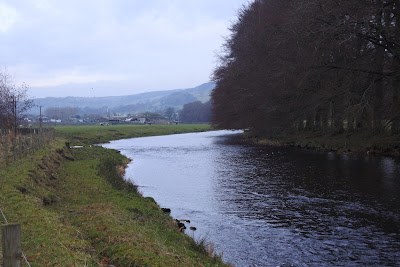 Reaching the river a gate leads up to the main road, the A65, and crosses the river to a path along the opposite bank. It's a decent path which follows the river bank to just beyond Brigholme Barn where the path cuts diagonally across the field to a style at the B road. Across the road the route is along a narrow walkway leading through a small housing complex and exits again at the river bank.

For a little while a domed structure could be seen on the hillside and then just beyond the houses we had a really good view of this fine structure. We didn't know what it was so we spoke to a local dog walker who told us it was Giggleswick School. It was established in the town in 1499 but moved to its present location on the hill in 1867 when the dome was part of the building plans. It used to be a bright copper colour but today its colour is a dull grey. 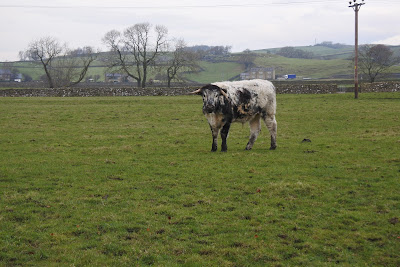 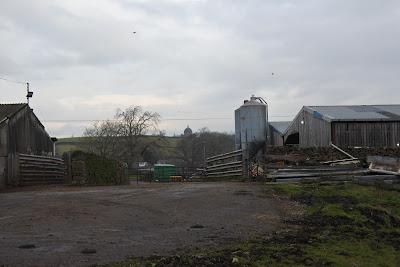 The Domed School on the horizon 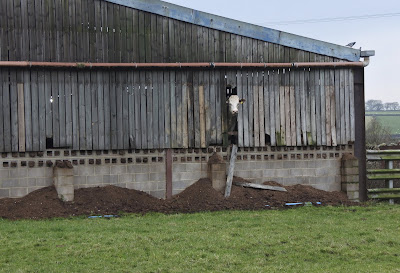 Let me out.
Many signs of old Settle mills adorn the river bank and most have been turned into smart apartments, they look good. The sounds of Mallard followed us but we didn't see many more water birds except a Heron.

Just beyond a modern footbridge across the river and into the village was a natural weir ,which gave us a photo opportunity. The next bridge which has the B6480 running over it was where we left the river bank. We took a few photos from varying angles and whist doing this we spotted a large waterwheel at the rear of Bridge Mill. This was very interesting as was the weir and water race. A few guys were working to clean up the area and we were allowed to have a look inside the hydro electricity generating station. Its only small but it was immaculate and generated 240 kilowatts. It provided power to the apartments at Bridge Mill and the remainder is sold into the national grid. 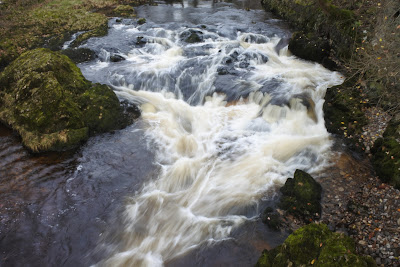 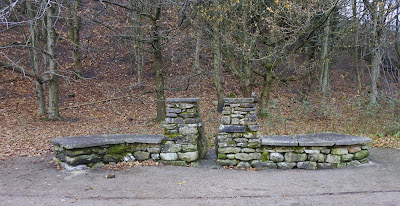 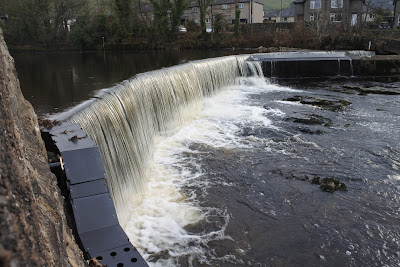 The weir at Bridge Mill 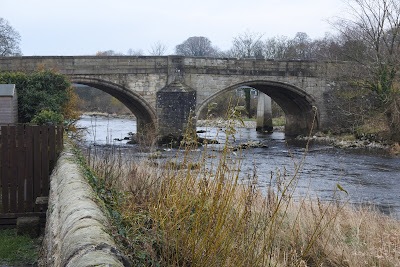 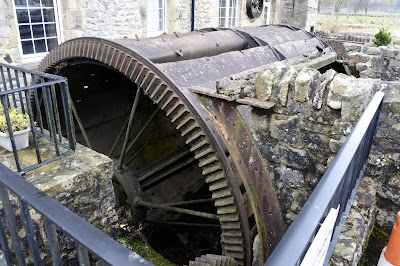 The wheel at Bridge Mill, it must have generated lots of power. 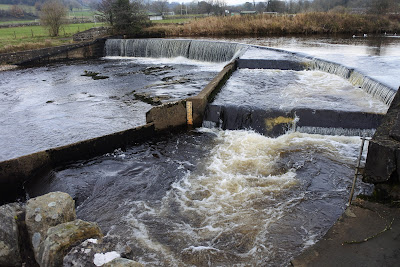 After a short walk through the village we visited the local church with its large cemetery and then returned to the route past the Folley Museum of North Craven Life. We called in and had a very interesting hour. A bit pricey to go in we thought at £8, but if it goes towards the maintenance of the building then it was worth every penny. 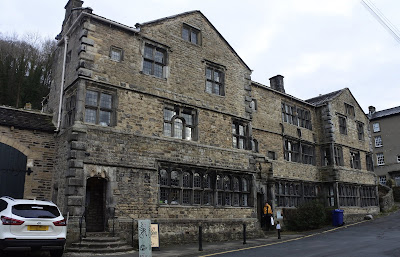 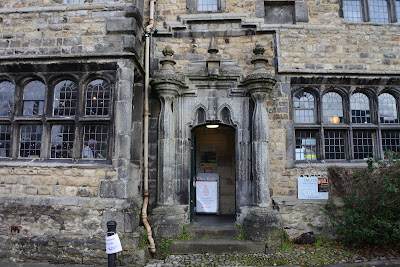 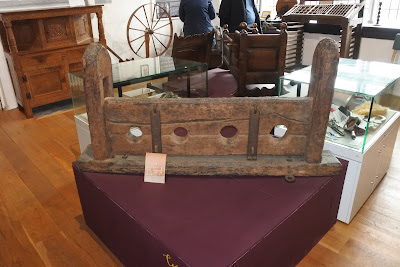 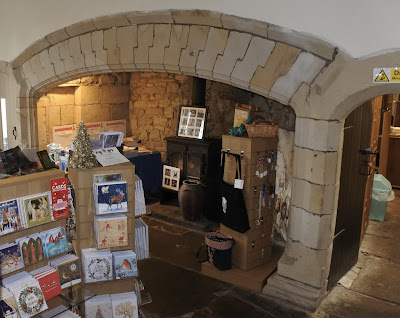 I took many photos inside the museum but i like the two below best. 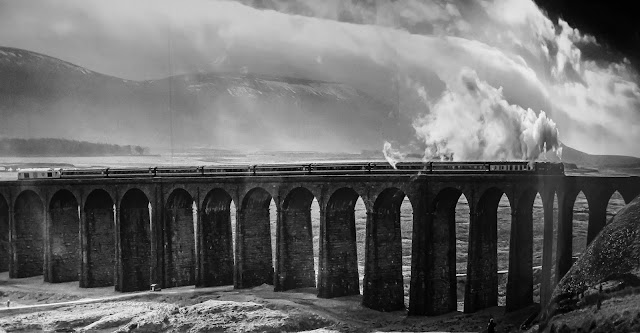 Onwards, down the road past some wonderful old cottages towards the Library. We took a left along Brockhole Lane. An old green lane which in parts is also a river bed. Some great views of Kirkby Fell, Rye Loaf hill and the rest of the ridge to the north and Hunter Bark to the east. 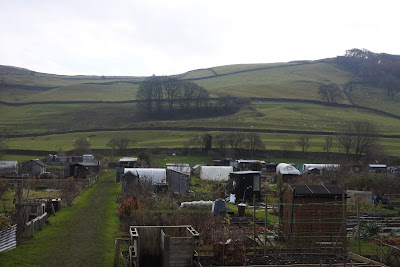 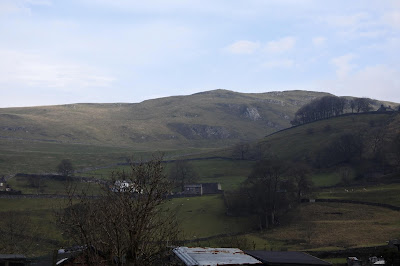 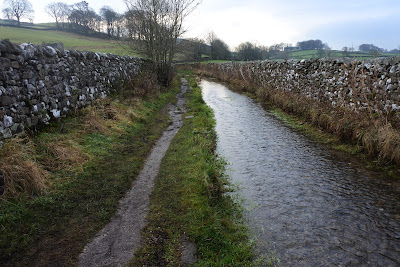 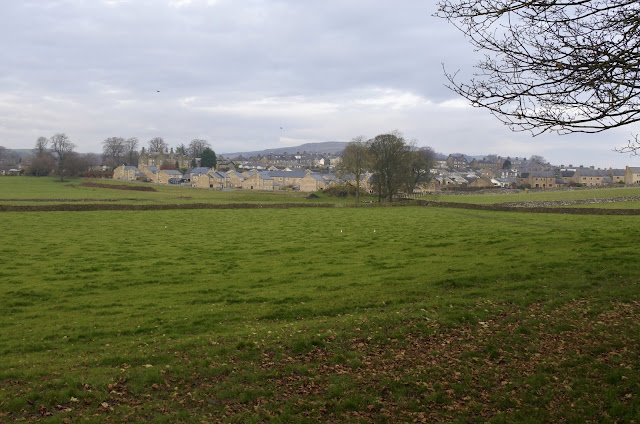 Looking back to Settle 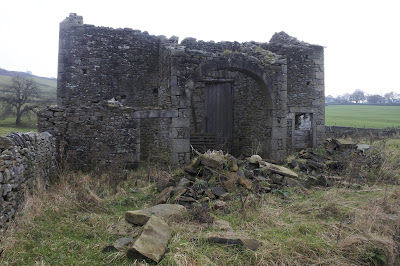 How Much! Yar in Yokshur Lad. 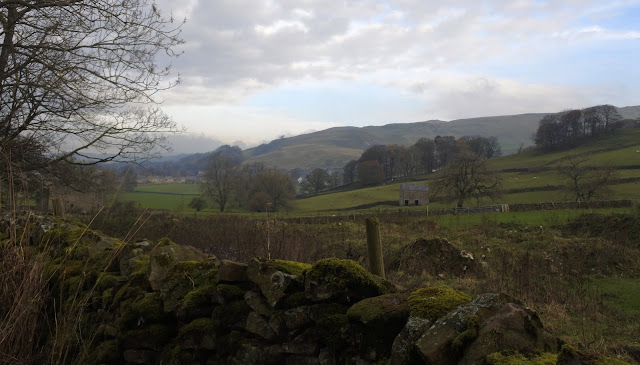 Yorkshire Autumn
It was turning into a nice day with plenty of blue sky but still a biting cold wind. On reaching the lodge road at Hoyman Laithe, we turn right and head back to the main road which brought us easily back to the car. (Laithe means either granary or barn) 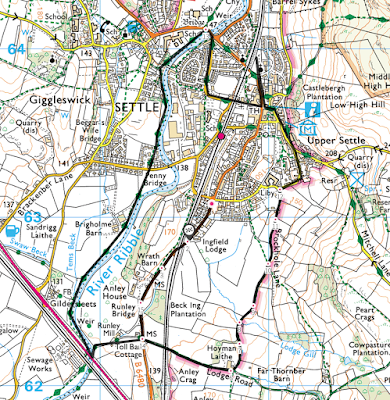 Much of interest to see when you stop somewhere to look round - I always seem to be walking through such places on a schedule. On 27th April 2014 I bought a new hat at that shop in Settle after leaving my cherished hat in a pub at Bentham the night before (it was eventually serendipitously returned to me) I overnighted there in the King William the Fourth Guest House - excellent.

Hi Conrad, small world, although you have covered quite a lot of the country.
We walked passed your b an b when we had a look at the Talbot pub which we were told does good food.

Hi Alan
That's a favourite walk for P and I...nice and flat for her poorly knee. Always lots to see.
An easy traffic jam drive for us which is a priority these days for us!
Thanks for sharing
Cheers
Alistair

We had never done it before and was pleasantly surprised. It is nice and flat but can be extended to include some up's too if necessary.