Sheila’s mum lives quite close to St Mary’s Church in Gosforth, West Cumbria and we have been going to the village for quite some time. We pass the church on numerous occasions but have never been in, even though we know there is plenty of interest within.
So this weekend we decided to go and have a look. 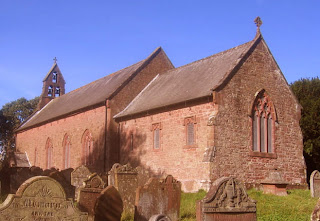 St Mary’s Gosforth Cumbria
There has been some form of religious building at Gosforth since the 8th century. The current church of St Mary is a Victorian building incorporating pieces from a 12th century Norman church.
The “potting” Shed is now a listed building as it was built with the original old bricks. 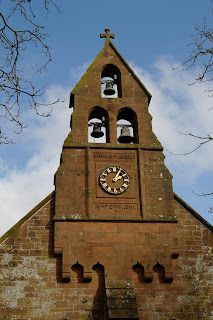 The Bell and Clock tower. 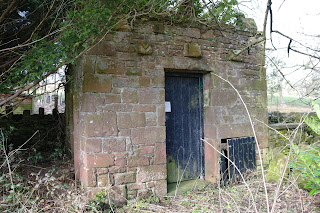 The old potting shed
Just inside the entrance porch are some old grave coverings, probably viking. 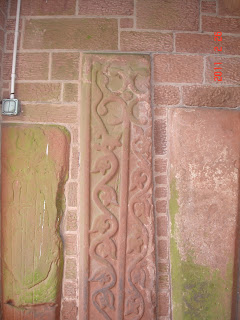 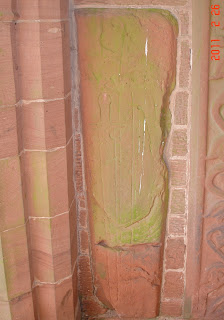 The church consists of a nave with north aisle, chancel, and a pasir of north vestries. Norman stonework can be found in the south wall of the nave. There is no tower, but a very nice bell turret at the west gable houses a ring of three bells. 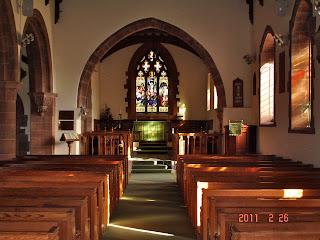 The real treasure of Gosforth, however, stands in the churchyard. This is the so-called Gosforth Cross, a beautifully carved Viking cross dating from the late 10th or early 11th century. The cross is made of red sandstone, and stands 14 feet high. It is round at the base, rising to a square top with a cross head. 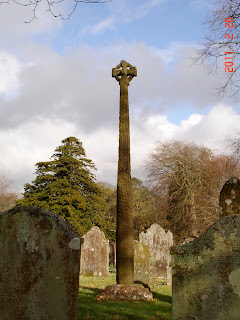 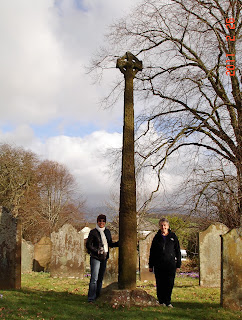 The lower, rounded section is carved with a representation of the Ash, known to the Vikings as the Tree of Life, with interlaced branches creating a wonderfully Scandanavian pattern. The square upper section has a wealth of carving detail, including images of a horseman, dragons, serpents, human figures, and geometric design. Only the east face has anything vaguely Christian; here you will find a carving of Christ standing above figures thought to be Mary Magdalene and Longinus. The cross has traditionally been interpreted as representing the triumph of Christianity over the old Norse pagan religion, but when you look at the carving you have to wonder just how complete that victory was at the time it was carved!

The carving is truly amazing, and the Gosforth Cross must be reckoned one of the finest pre-Conquest treasures in England, right up there with the Bewcastle Cross near Carlisle. Its actually a bit of a shame that it is still standing out in the British weather, mind you, where it will undoubtedly continue to suffer the effects of advancing years.

But, there's more to see within the church. At the east end of the north aisle are a pair of beautifully carved hogback tombstones, discovered during repairs to the church foundations in 1896. These were meant to act as houses of the dead, and mark the graves of local Norse chiefs. They are carved with lovely geometric patterns and battle scenes. 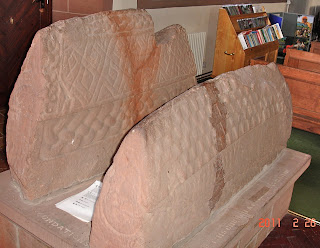 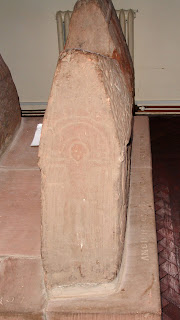 The capitals of the chancel arch are Norman work. The south capital is carved with three faces, and the north capital shows a Green Man symbol on one side, and two detached arms. There are further ancient fragments of stonework including a section of a carved cross. 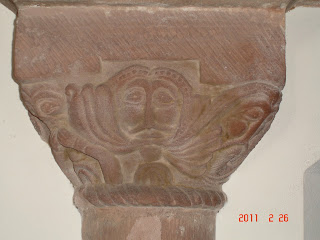 There is a Chinese iron bell on the western window sill along with a pair of cannon balls. 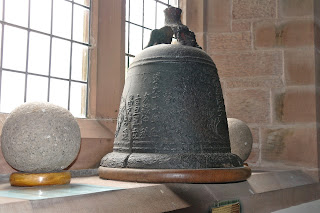 The bell was cast in 1839 and captured in 1841 by Sir Humphrey Le Fleming Senhouse from the Anninghoy Fort at the mouth of the Pearl River, Maccao.
When the bell came to Gosforth a local blacksmith made a clapper for it and it was then hung in the bell tower. However Chinese bells are meant to be struck from the outside so at the first ringing with the clapper, the bell cracked and was taken down a little later during some restoration work.
The cannon balls came from the Dardanelles during the Crimean war. 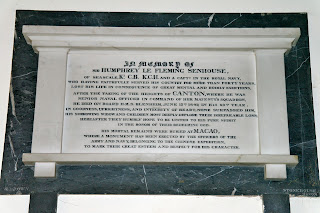 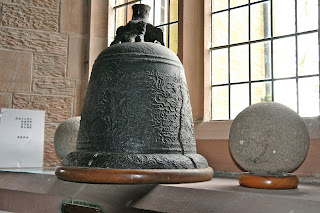 Below, the Norse fishing stone. 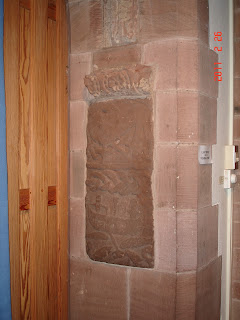 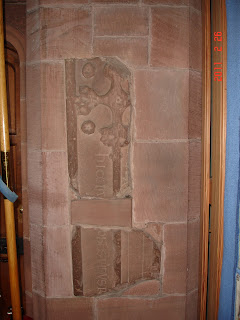 There is the beautiful Victorian organ and some stunning stained glass. 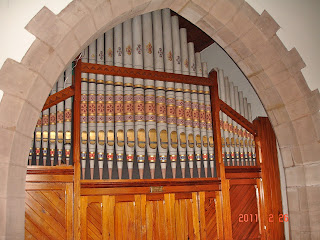 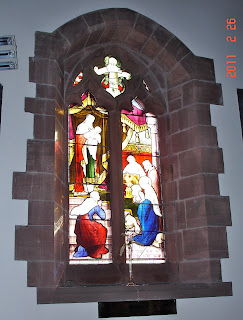 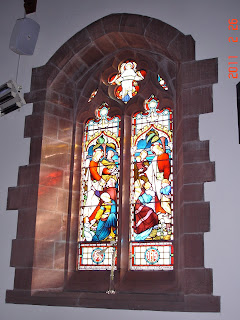 And on the wall of the bell tower is a Coat of Arms showing the Lion and Unicorn with the Motto Dieu et Mon Droit. God and my Right.
This is the Motto on the coat of arms of England and the British Monarchy. I am not 100% sure why it is here or the age of it, unless it’s depicting allegiance to the Monarch. (I will find out in due course and make an amendment to the post) 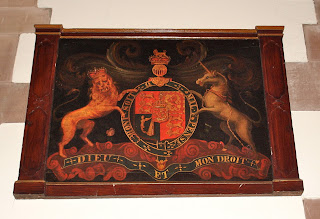 In the Church yard stands an old Cork Tree which was planted in 1833. This is said to be the most northerly living Cork Tree. 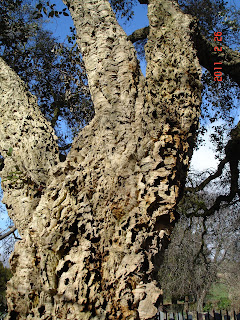 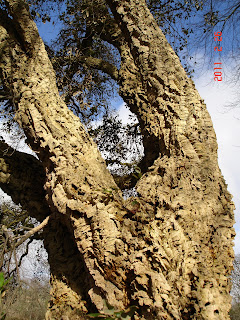 Many of the headstones are huge and ornately carved. This one below shows the Grand United Order of Oddfellows. The date shows 1874. 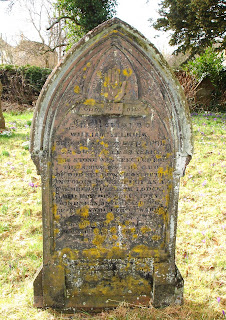 The crocus sunbathing in the church yard 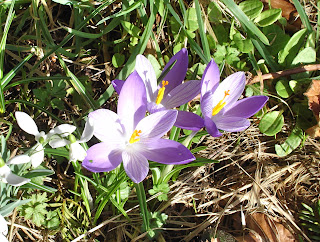 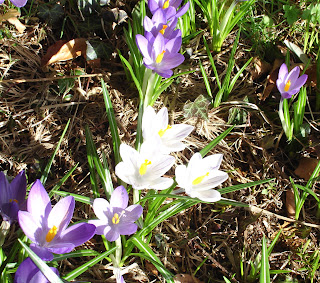 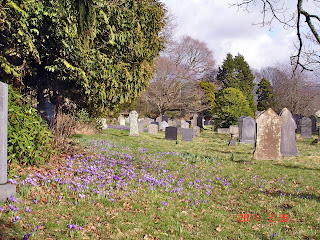 Although St Mary's may be a Victorian church, the history and artefacts that date back from the 10th century are certainly worth a visit if you are ever in the area.

(some information was gathered from Express Britian)

Super post full of information and interest. What a beautiful church St Mary's looks from your photographs, and as you say it's a pity the Gosforth Cross isn't brought inside to protect it from the ravages of the weather.

Lynne's mum will be particularly interested in the Victorian organ since she used to play the organ many years ago.

Old churches are often worth a visit! The stained glass in this one is particularly beautiful.

It amazing to think how old the Cork Tree is. It must have seen a lot.

We still need to wait for the crocus up here! Very spring-like it looks.

Hi Maria,
I'm surprised the cork tree has survived some of the winters but it has.
Churches have great historical potential that they don't always show until you start investigating.
I enjoy them.

BTW, good video on Helsinki on your blog. Must cost a lot of money to maintain but it has to be done.
Soon be spring again. It's been lovely here today.

Some great interior / detail shots there - always difficult to do in a church. A lovely-coloured stone as well; goes well with the sunset photo at the top of your blog.

Thanks for the "Tour" we've a favourite camping spot at Newbiggin near Waberthwaite, so I'll add this to the "to visit" folder, I'd like to see the Cork tree. cheers Danny

Hi Danny,
You will not be disappointed.
Newbiggin and camping? I thought it was just a caravan site. Well you learn something everyday. Is it a caravan club only site?

Thanks Gibson,
There is probably more to find in this church. Ours was just a relatively quick visit. But it's on the doorstep, so to speak, so going again is not a problem.
There is so much Norse in this area it's an interesting place. Gosforth Hall just next to the church has many Norse finds too.

Hi Alan, Newbiggin :-
http://www.waberthwaite.com/details.html
I mean this as a compliment but it's like going back to the 1950's, facilities consist of a cold water tap and a toilet bowl set flush (no pun intended) in the field, to empty buckets, it's out onto the road and round to the farm yard for a cobbled together sink and shower and toilet in the old buildings, a mouse ran over Brendas foot in here ! several times we've been the only ones camping on site I think he's only allowed 5 caravans but we've never seen any. On a night 100's of Oyster catchers come whistling in to roost on the estuary a magic place --- cheers Danny

Thanks for that. You know i might just try it one night.
Turner Hall campsite at Seathwaite used to be like that too.
I like mice, they crawl into rucksacks and find dehydrated food.

interesting post, thanks. History really is all around - the stuff those vikings leave hanging about in churches, eh?!

yr comment about mice made me laugh out loud, Alan!

Hi David,
It’s good to laugh, especially out loud!
It’s amazing really how much history surrounds us if we are prepared to look a little closer.