It was unusually warm as we packed our day sacks for the 3rd part of the Salford Trail being led by the East Lancashire Long Distance Walking Assoc.
Pt. 2 finished at Worsley Old Hall and as you will gather that’s where Pt.3 started from.
It was to be a 19k walk ending at Irlam Railway Station.

It was to be quite a nostalgic walk for me as this was the area that i had grown up in as a lad and obviously knew it very well.
It was a good turn out at 20 folks who set off full of chatter and at a good pace.

Through the very smart golf course we were almost struck by a ball which had been sliced by it’s master and whom was greeted with the shout “You should have gone to specsavers mate”. Very witty.
The ball was kindly retrieved and returned to him.

Through the links we crossed the very busy Leigh Road and headed down the lane to the Garden Centre and Middlewood Scout Camp. I had had many a happy time here, sometimes legal sometimes not. Well kids like to sneak about in the outdoors don’t they.
The track leads to the Bridgewater Canal which we followed into Worsley Village and stopped for a quick brew on the Green before heading off to have a look at the entrance to the Underground Canal System. 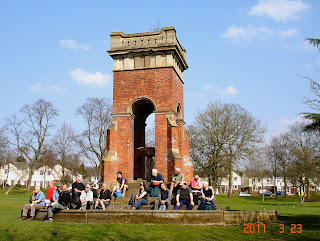 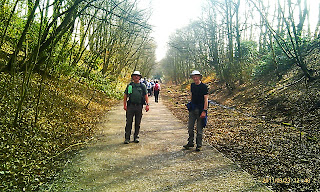 Martin and I.    Sent from HTC.
Back onto the canal we stopped at the Folly light house on the Bridgewater Canal. 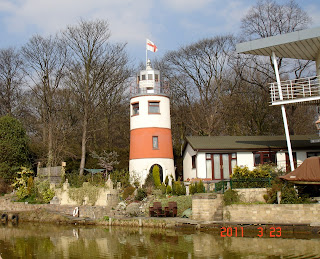 The Folly at Monton 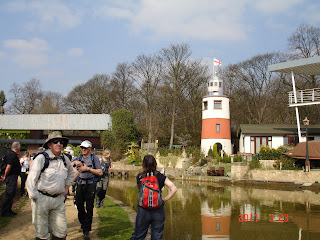 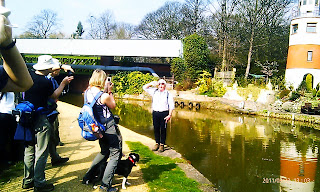 The canal was quite clear here and we could see small Perch swimming along with all the other discarded dross that ends up in canals.
The water being so clear is not a good sign is it?

Where the Bridgewater canal meets the Manchester to Liverpool Railway line, the first commercial passenger line, we turned west and followed the track adjacent to the line for a mile until just prior to the M60 we turned south through a now wooded area where once i had played football and cricket and camped out as a lad.
I was surprised to see the amount of rubbish that people had dumped. Dreadful.

I will quickly get us through Brookehouse Estate and onto the footpath alongside Peel Green cemetery which leads us to Barton Airport and Barton Moss.
We stopped here for lunch as the small Piper aircraft were doing taking off and landing exercises.
Martin kindly handed out small stuffed peppers and they were very nice.

The Old farms i once worked at in my spring, summer and autumn holidays were now looking quite sad although those that had got through obvious hard times were doing well. The land is good land here and the views extensive. I loved working on the farms wizzeling, (local term i think, for removing the dead growth above the potato furrows), spud picking, cabbage and sprout picking. 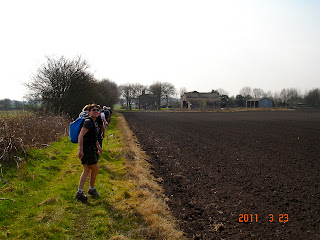 Tunnel Farm in the background.
The area of Barton, Chat and Irlam Mosses are extremely flat areas and a great deal of peat bog is being drained and extracted. The sounds of Bird scaring from Botany Bay woods were still going on as i remember they were 40 years ago.

The land is very much the same here flat and featureless and eventually we turned off back into civilisation joining the A57 at Irlam Station and the end of this leg of the trail.

The day had been a delight, good walk, weather, company and a good laugh.
Thanks to the EL,LDWA for the organisation. Looking forward to Pt. 4 already.


A much more informative post on this walk was done by Martin, (Phreerunner) and can be found HERE
Posted by AlanR at 12:34 PM

Thanks for the link, Alan - I enjoyed slaving over that report. Enjoyed reading yours as well, especially your memories of the Mosses.

I didn’t take many pics on the walk Martin so linking yours was just the ticket. Thanks.
The Moss! I spent lots of time out there, it was such an adventurous place to be as a child. Old farms, barns, woods, the old army barracks, the railways, lots of birds, rabbits, fox’s and so much more. Happy days.

Happy days indeed - mine were in Shropshire and on the North Yorks Moors.

The little light house is lovely!

A nice walk, and full of memories, it seems!

Maria, the memories were all good ones.

The light house is there to guide drunks home so that they don’t fall in the canal. (Well thats my opinion any way).