A tale of two bridges.

I have spent a little bit of time away from the blog this last week or so.
At some point within the year you have to give priority to jobs around the house and i needed to decorate the kitchen, landing and stairs.
The call to be doing anything but this was always there but i knew it had to be done. It had been put off far too long.
We absolutely blitzed the job and so today having arranged with a friend to go out and do a bimble from Sowerby Bridge to Hebden Bridge, i managed to fulfil the arrangement.

Sowerby Bridge and Hebden Bridge like so many so villages gained prosperity with the Mill’s and with the development of the canals and railways to transport goods.
The walk today follows the Rochdale canal. It is quite an unusual area with 4 modes of transport running parallel the whole way. Apart from the Rochdale canal, there is the River Calder, the Railway line from Manchester to Leeds and the main A road.

We caught the train from Castleton to Sowerby bridge which took about half an hour or so and as the conductors ticket machine had run out of battery we got off scot free.
Where did that saying come from Scot Free?

Amendment added 14/7/2011.
Phrase, Scot free:-
'Scot' is a Scandinavian word for tax or payment. It came to the UK as a form of redistributive taxation which was levied as early the 13th century as a form of municipal poor relief. The term is a contraction of 'scot and lot'. Scot was the tax and lot, or allotment, was the share given to the poor.

Scot as a term for tax has been used since then to mean many different types of tax. Whatever the tax, the phrase 'scot free' just refers to not paying one's taxes.
No one likes paying tax and people have been getting off scot free since at least the 11th century.
(My thanks to Phrases.org.uk)
Our walk plan was not distinct but quite fluid. Fluid being the intention. If we could get a beer along the canal every half hour or so that would be great.
As it turned out this was never achieved.
We alighted from the train at around 11.00am and after a spell of window shopping in the lovely Sowerby Bridge we headed off east past the wharf with the 253ft Wainhouse tower taking the background view. 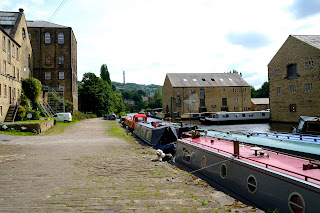 We got to the Navigation Inn to find lots of hoovering going on but alas too early for anything liquid so we retraced our steps and carried on along the Rochdale canal West towards Luddenden Foot. 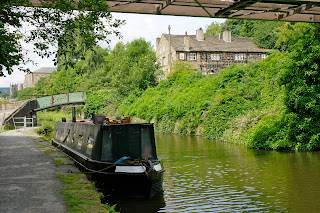 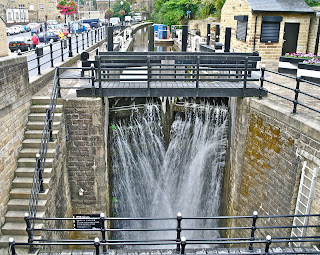 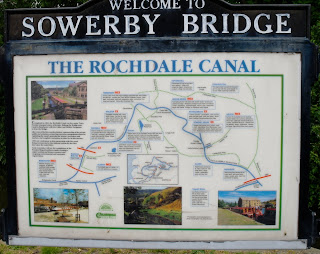 The day was quite warm with the sun to our backs and the walking obviously very easy with being alongside the canal. 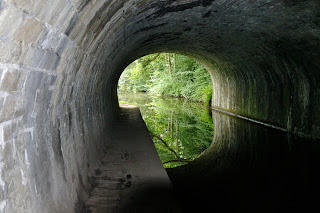 One of the many tunnels on route. 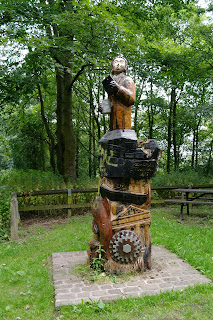 We came across this statue of Patrick Branwell Bronte along the towpath.
The scenery was most enjoyable, the industrial archeology there for all to see with the now derelict mills, some that had been renovated into new homes and the old canal cottages and small business’s. 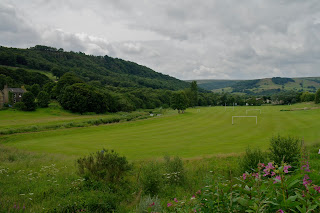 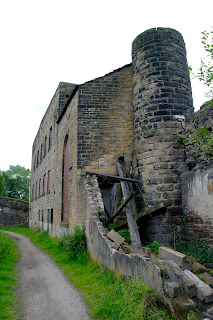 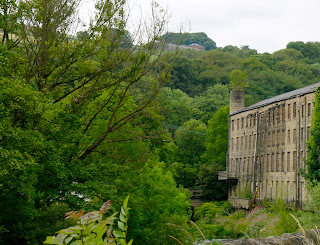 It is a sign of the times that from Sowerby Bridge to Mytholmroyd we didn’t find a single pub open along the canal.
The ones we knew were boarded up or for sale. Yes, we could have strayed away from the canal to find some refreshment but desperation had not taken over.
We decided to carry on ahead towards Hebden Bridge where we came upon this cheeky heron who didn’t want to move. 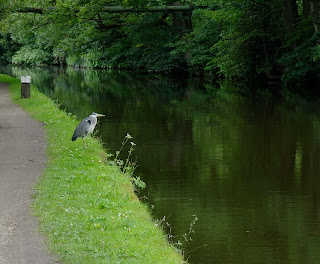 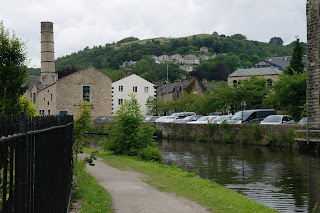 All too soon we were on the outskirts of Hebden Bridge, having passed 2 herons, a field with Highland Cattle, numerous ducks, geese, chickens, goats and 2 stoats that i never had time to get a photo of. 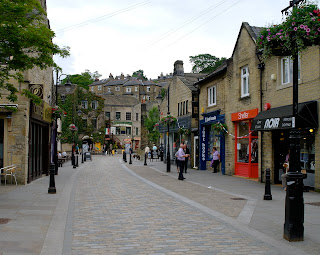 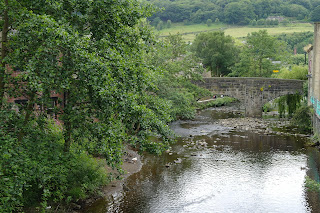 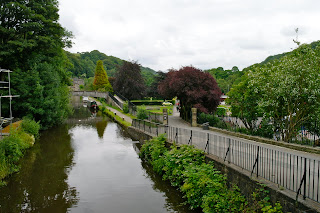 The Rochdale Canal at Hebden Bridge.
There was a need for some lunch and a beer now that we had reached our destination. The Railway pub was first in sight and we made haste there. Unfortunately no food so we moved on until we found the White Swan Pub on Bridge Gate.
Our luck was in, food was ordered and Black Sheep Cask bitter served and demolished.
We were on a timetable for transport so we had to keep an eye on that. 10 past the hour for the train back to Castleton or 20 past the hour for the bus back to Rochdale where we could then get a change of bus home.
The train was the most convenient and the shortest travel time so we chose that.
Having then walked for 20 minutes finding the railway station we said we could have been half way to Todmorden in the time.
Maybe another day.
Posted by AlanR at 8:30 PM

Alan, a great little trip, which just goes to prove that fine walks can be had away from the hills. My favorite walks combine the hills, great architecture and villages buried away in valleys. Cannot be beaten !

Hi Mark,
Thanks for the comment. The guy i walked with is not a walker hence the lack of hills. It was his birthday and he took a day off work to have a few beers as you do. The fact that we actually got to Hebden Bridge was a bit of a surprise for me. It is a lovely walk and one i will fit in with something a little more arduous in the future.