Top of Leach in a Gale.

Having parked up at SD 871-158 and just managed to hang onto the door as we got out, we headed off on a windswept day heading for Top of Leach  at SD859 - 178.
There was plenty of blue sky around and thankfully the views excellent.
It was quite a biting wind and it was straight in our faces as we made our way up Rooley Moor Road.
Height is quickly gained and turning around out of the wind we managed to keep the camera steady for some photo’s. 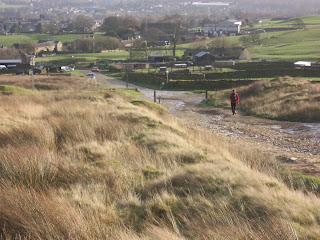 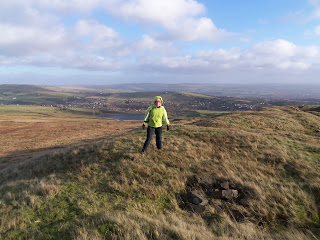 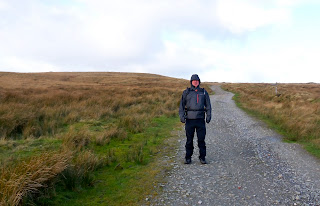 The track we are on has lots of history attached to it and the more that you search the more interesting the story becomes.
The route was built for the cotton industry and the old original cart tracks can still be found in a number of places. An example of which is below. This dates to pre 1860 and is known as “The Cotton Famine Road". 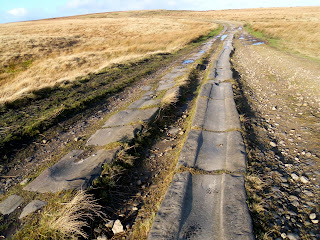 During the times of the American Civil war when the Union blocked the Confederate ports, cutting off cotton shipments to this area, it obviously caused great hardship and was called a famine. This may have had something to do with the many Irish folk that had come over to find work during there own “Potato Famine" a generation earlier.
Some work had to be found for these poor souls and an enhanced road was built using quarried sets and again is still clear today and in good condition. 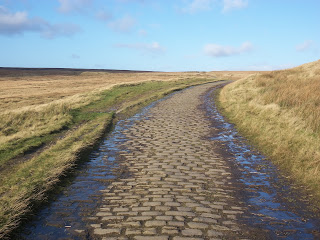 Even through the hard times the people here backed the Union and the abolishion of slavery and when that event happened a letter was sent to President Abraham Lincoln and which was given such significance that he replied within 2 weeks.

A much better account of events can be found here.
During a period of quarrying and also for the land owners, a pub was established called the MoorCock Inn. Unfortunately only the basic footings of the building and the gate posts remain today. 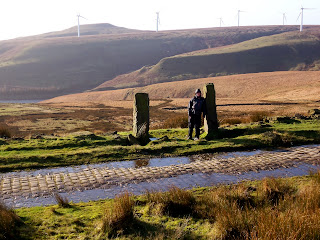 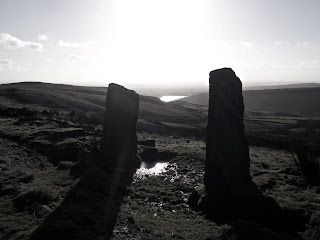 The MoorCock Inn gate posts.
Keeping on track we came to the Trig point which is Top Of Leach where today we could make out Whernside, Penyghent and Pendle Hill. 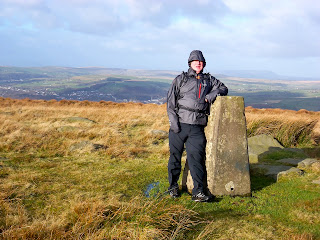 It was bitterly cold now and fortunately for us there was a wind break in just the right place.
Lunch was taken fairly sharpish if a bit late and off we went back. 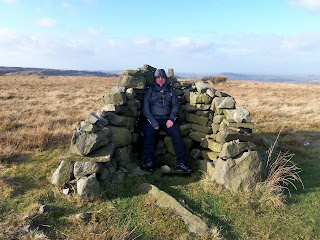 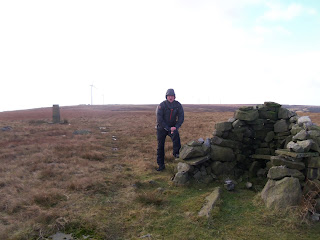 We headed south towards a (BS) boundary stone marked on the map. (Sorry no map as the printer has decided to take a short break).  We were not watching where our feet were going because next thing Sheila slipped, but she held onto my hand firmly and with the momentum of the slide threw me bodily over her shoulder just like a professional wrestler. We lay in a puddle for what seemed like 1 minute but was probably no more than 20 seconds. Bruised but not broken thankfully.

The sun had moved further round towards the west and gave us less hazy views south where we could make out Manchester City Centre and the Beetham Tower. Unfortunately the photo was not good enough to print. So here are some sheep and cows instead. Much better we think. 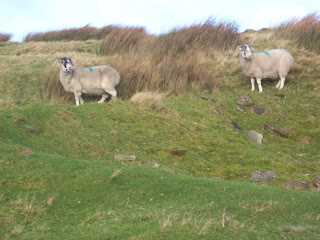 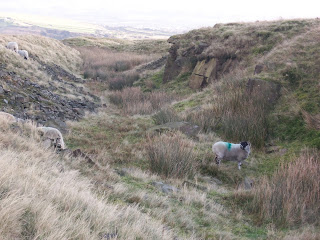 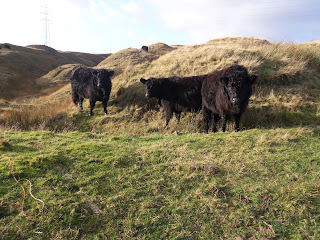 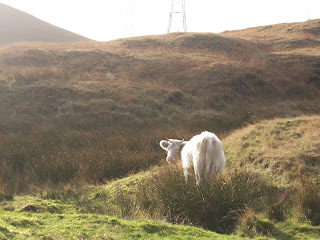 It seems that you're on the road to recovery from you're herpes zoster episode... It was refreshing at the weekend, wasn't it?

Fully recovered Mike Thanks. Refreshing to say the least. It was a time to be well wrapped up.

You can just feel the cold in those photographs Alan. Interesting bit of history there. Thanks.

Seems we were all within a stones-throw of each other on Sunday. When I can get round to it I shall write about my Sunday walk to the pub and back via Moughton scar and Long Scar.
Bracing, it was!

Hi Gibson,
Yes the history is worth seeking out. I shall find more next spring.
Cold, it was.

Hi Alan,
Yes as the crow was blown, we were not too far away from each other. This is a nice spot to walk and worthy of a trip of greater magnitude after my New Zealand trip.

A nice post, Alan. An interesting piece of information this cotton road. Good to hear you've fully recovered - just in time before your trip to New Zealand!

Hi Maria,
Thanks for your comment. Yes not long now before NZ.
Glad you found the history interesting.
Sorry about the link not working. I have now deleted it and will find another way of posting the info.

Alan, walked this area before, didn't know about the history, so thanks for link - you learn something new everyday :)

Mark it’s a smashing area with some good overnight spots too. It would be really atmospheric to get a book about life up here on the moor 150 years ago and read it whilst looking out of the tent door.

Very interesting Alan, I have an overnight route planned in that area - Bury to Rochdale, camping around SD 833 188 if that's feasible. Just need to find time for it!

That area you suggest for camping is dreadfully boggy. Like what Black Hill used to be like, like.
It's not far off your grid reference, i think it may be better to find somewhere near the reservoir just to the west.

Alan - in response to a comment you made on my blog: conradwalks.blogspot.com, I found that after updating to Lion on the Mac my Parallels Desktop 5 would not open, and I had to update to Parallels 7. All is working reasonably well, except that I occasionally have a problem connecting to the Internet through Safari which is solved by doing a restart. I'm not sure if that problem is related to these recent upgrades or not.