Whoosh - Coming to a hill near you!

I was keen to get out today so, i checked the weather forecast last night and it was good.
Today I drove up the A680 Edenfield Road and parked up in the lay-by close to Ashworth reservoir.
I had no grand route planned, i just wanted to be out  and wherever the legs took me well that’s where i went. Well it would be difficult not to wouldn’t it.

The last time i was up in this neck of the woods it was cold, misty, some ice and not much of a view. Although today the visibility was good it wasn’t as clear as a bell and the low watery sun was not an ideal partner for photographs.

When i left home there was still a redness to the edges of the cloud and i was hoping for something better from higher up. I had taken the tripod so that i could take longer exposure shots. if i got the chance.

Unfortunately the sun had climbed a little too high and it was right in my face as i made my way up to Knowl Hill. 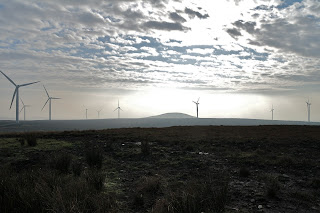 Knowl Hill and Scout Moor Turbines in the shadow. 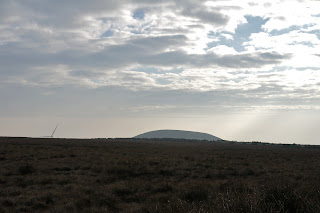 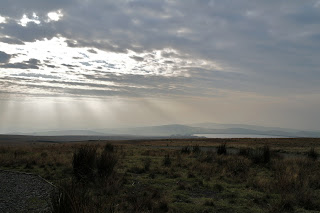 Looking back to Ashworth Reservoir from the Approach to Knowl Hill.
The turbine site has gouged this landscape and cut 10 metre wide gravel tracks through it’s heart.  Today there was little wind and the continuous noise of the extractor fans amplified by the 60 metre wind pipes, could be heard even louder than the intermittent whoosh of the triple 40 metre blades.
There are 26 turbines in all but it looked like 3 of them were not working.
The path had quite a few boggy sections and i had to make a couple of detours to avoid wet feet.  At one point i thought i had come across a builders tarpaulin but it turned out to be quite a large tent that some poor souls had taken a battering in. They had obviously had enough and made a quick escape and left the bedraggled gear to fend for itself. There wasn’t much left.
Once at the top of the hill i was bathed in sun. Bright but not that warm enough for sun bathing. After all it is mid November. It was still delightful and i decided it was a good place to have a cup of tea.
I donned my outer jacket which up to this point had remained in the rucksack. 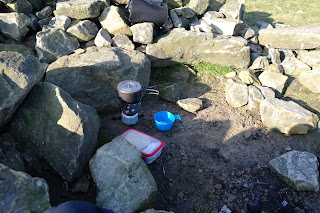 Tea time. (Jasmine Green tea)
I set the camera for a timed shot and only just got into the frame as the shutter operated. 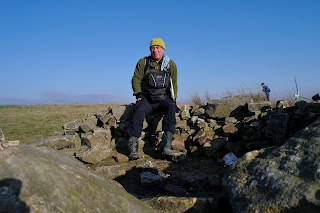 If i had only waited a minute or two maybe the chap in the background would have taken a photo for me.
I sat in the windbreak for about 10 minutes just appreciating my surroundings. Also within the windbreak was empty bottles, crisp packets, tea bags, remains of somebodies lunch. Why do people leave litter. It beats me what kind of a brain they have.
I touched the trig point as i always do to prove to myself that i have actually been to the top and surveyed the panorama. 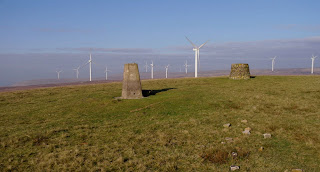 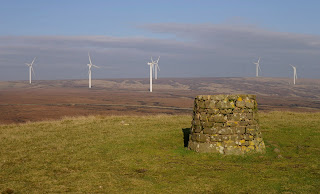 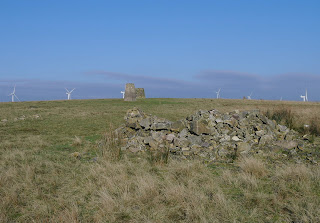 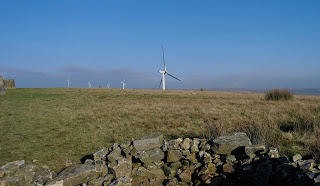 Views to the North and North West from Knowl Hill.
Brew over, 3 running types came up from the east side and went to the trig point for a 10 second stop and pointing session before carrying on in a South West direction with a “Good Morning” as they past me yawning.
I also headed east and headed for Dixons Brow. It was quite a drop off here which i didn’t particularly want to do, so i decided to contour round to pick up the gravel track near the mast. Looking at the map there is also a mast at Higher Hill off in a North Westerly direction which looked ideal for what i wanted to do. So off i went with the sun behind me. It was so bright at times the blades stood out like stars. 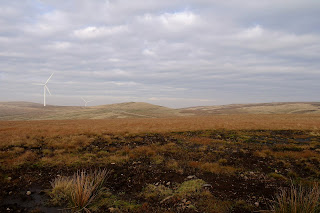 Not far along the track i got fed up of it and wanted to get off road. I could just make out the mast on Higher Hill in the distance and just went for it. A straight line job.
Well this proved not such a good idea as it was 1 step forward and 2 steps back. Bogey being an understatement. The map shows a ditch running NNE and i thought i could follow it as it went in my direction. Retracing my steps i again ended up on the gravel track more or less where i had started.
Oh well at least it wasn’t raining.
One thing for sure is that you can certainly pick up speed on these tracks and in no time at all the mast was in sight ahead. 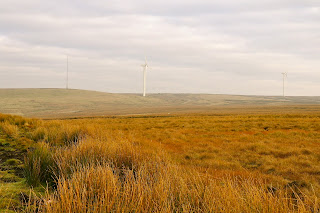 Higher Hill Mast.
Another 15 minutes and i was there. I sat down on a raised bank and had my lunch of Cheese and Onion on Brown Bread and another brew. A group of 3 others passed me looking as though they were heading for Whittle hill. They didn’t see me at all and i was no further than 30ft away.
Checking the map i wondered about going over to Cowpe Low but decided it had been a good test for the calf muscle and not to push my luck. I decided to call it an afternoon. 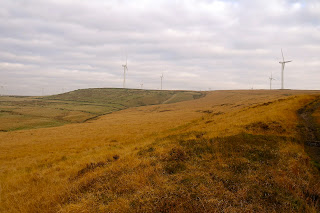 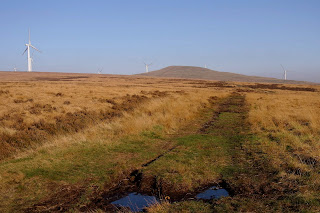 View back to Knowl Hill from near Cheesden Edge.
It had been a pleasant walk even though the turbines blight the view.
I got back to the car and heard this screeching, bird screeching. Then i saw this chap with a hawk at the back of his car. Approaching with caution i eventually got within a few feet and had a chat with the owner of what turned out to be a Harris Hawk. It’s name was Skye and was 4 years old.
By all accounts it doesn’t like cars or people and the owner brings it out here to hunt. 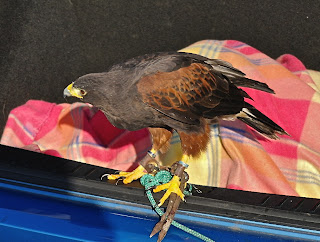 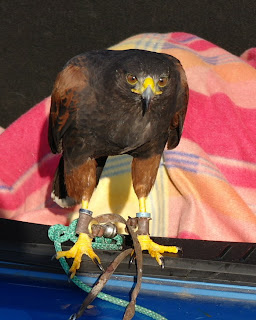 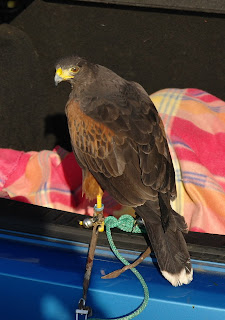 It kept looking at me all beadily like so i took a few pictures and then retreated to a safer distance. 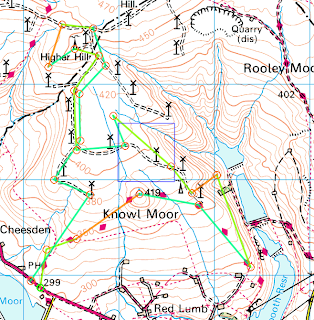 Careful with that leg, Alan. It looks like you had a grand day for it.
Take it steady,
:-)

Thanks Alan. So far so good. No post walk aches as yet. It was a cracking day, i was so pleased to get out. Roll on weekend and another walk hopefully.

Your pictures aptly demostrate the vandalism of wind "farms".

Best wishes for your recovery.

Hi Robin, You are right. Weapons of mass destruction of wilderness areas.

I hope my recovery is now complete. Thanks for the kind wishes.

Recently in the Ochils we passed close to the Burnfoot turbines (as close as we ever want to get). Needless to say there are plans afoot to more than double the number, which will be disastrous for this small range of hills and those who find peace and quite among them.

Love the Harris Hawk photos Alan. Lucky you to get so close.

Hi Gibson,
Humanity is supposed to be the smartest animal on the planet. That may be correct although i doubt it. We must also be the most stupid, short sighted and greedy.

I got as close to the hawk as i wanted to get. It was tethered at this point.

Getting that up-close-and-personal with a bird of prey must have been quite an experience!

Hi Hendrik,
It was fantastic and a surprise to see one.

Alan,when I come across trig points and cairns, it normally means that I will looking at a great view of the surrounding countryside. Your photos show how these views are so easily spoilt by ruddy wind turbines - such a shame. I increasingly feel that it is important to take photos of unspoilt vistas, because we may find that we are all taking historically important shots of what was once an unspoilt view and now blotted out by turbines :(

Apart from the horror views Mark, i wouldn't have gone up there if the wind had been stronger as the noise is horrendous as well. I wouldn't like to live near one of these monstrosities. It must be dreadful.

Looks like a nice day out. Littering makes me sad.

It was pleasant Maria. Like you i abhor litter. There’s no need to litter anywhere.
It just needs the right chemical in the brain to tell the hands to put it in the rucksack or pocket. Simple i would have thought.