We had a chilly overnight in the tent on our campsite close to Broughton in Furness, and it dawned no better. In fact the wind had picked up and it was down right freezing. Not a place to be standing around.
Sheila had never walked the Woodland fells until now, although Great Burney was done as a short walk last year.
It has also been quite a few years since i walked round here too and although it’s not in the same class as the high fells of lakeland there are still some pretty steep bits and the views are excellent.
Our route was to be a figure of eight taking in Blawith Knott, Tottlebank Height, Beacon fell and Beacon Tarn.
Some of the track is also part of the Cumbria Way before the more serious heights are tackled.
We parked the car near to Giants Grave, thought to be a Bronze Age Barrow about 4000 yrs old. Stupid me didn’t take a photo. Sorry.
There are lots of historical sites in these hills which are well worth seeking out, however, today was not the day, due to the biting wind coming straight across from the Irish Sea. Today was a day to keep moving and infrequent stopping. 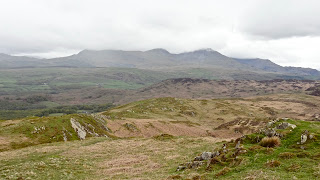 Looking North towards the Coniston Group of Mountains. 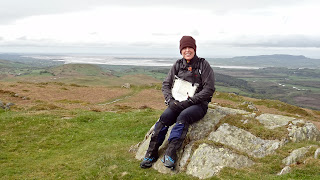 Sheila at the top of Blawith Knott, kitted out in 4 layers of gear.

Just at this point we were greeted to a short burst of sleet and rain and we sheltered behind some outcrops. Fortunately it was only for a few minutes and then it was clear again. 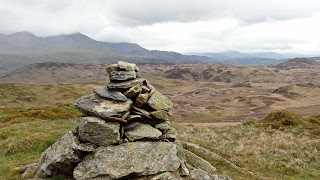 We picked up the pace a bit and without dropping down much set off for the top just marked 204m on the OS map and then followed Mere Sike down to join the good path between Spunham and Cockenskell.
Before i looked closely at the map we were off heading for Cockenskell when if i had been a bit more alert we could have gone north and seen the Coulter Stone. Next time.
This is where we briefly joined the Cumbria Way, now heading North to pass Beacon Tarn on the west side and heading for Coniston. 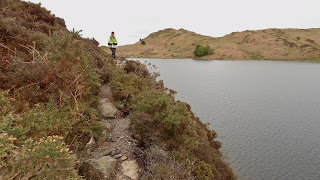 At the southern tip of Beacon Tarn we followed the good path on the East side which led us up onto Beacon Fell. Sheila had now donned her fifth layer. 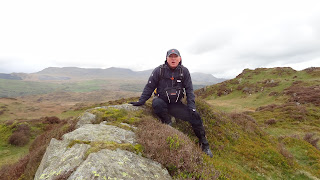 Yours truly on Beacon Fell having a breather before moving rapidly off. 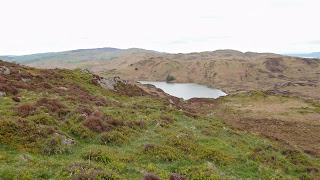 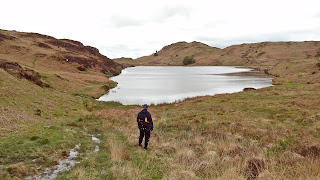 Beacon Fell was our turning point and we followed the boggy path on the west side of the tarn before heading up to Tottlebank Heights, seen here beyond the tarn. 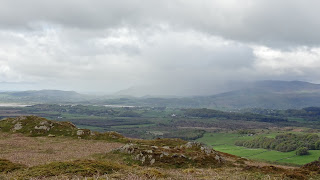 Good views from the tops and more rain on it’s way in. Black Coombe disappearing before us to the west  as the rain swept in, but some relief for the souls walking on the Old Man of Coniston as the black clouds look like they are retreating for a while at least. (Below). 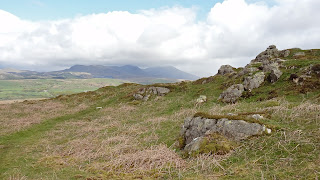 Apart from a chocolate bar on Beacon Fell we never stopped for a drink or some lunch so it was good to get back to the car for a hot drink and something to eat.
On arrival back at camp we had another green tea and got into our sleeping bags to warm us up. Fortunately we brought with us about 30cl of Glen Livet whisky which helped allegedly. 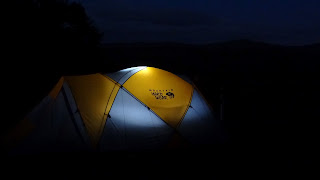 Tomorrow hopefully we get a warmer day as Wetherlam is planned.

For those who want to view some more photo’s of this walk please click on the link here.

Intersting post Alan. In 40 yrs of fell wandering I've never been there.
Must rectify that this year.

Hi Greg,
It’s an area walked infrequently. We only saw 2 fell runners the whole time. It is definitely worth a day out especially if you have an interest in Archeological sites etc.
There is also a place called Heathwaite settlement which is said to be Bronze age as well as much more evidence of Iron Age too.
Just pick a warmer day.

An interesting walk and post Alan. Pity it was a bit on the chilly side (to say the least). When will summer arrive I wonder?

Hi Gibson,
It is an interesting area and we will return in October and take another look at the historical sites. Hopefully summer will arrive by then.

I sympathise with Sheila - I'm always the one putting the 3rd, 4th and 5th layers on!

Maria, You have a valid reason for the extra layers. Its colder in Finland. Although summer has not arrived here yet.
So much for global warming. I think its a myth.