During our weekend at the Walna Scar Shepherds Meet i spoke to local hill farmer Stephen Gorst. He farms at Hoses which is near to the summit of the road over Kiln Bank Cross. He was telling me about his plans for the campsite he is just opening up.
OS Grid ref SD216927.

The camping ground looks good but the facilities are very basic at this time.
Ideal for the backpacker who isn’t too fussy.

Stephen tells me that plans to build shower and toilet block will be carried out over the winter months and hopefully will be ready for spring 2013. The views from the site are very nice with an open southerly aspect. West and East the views are of the fell sides.

It’s a good spot for winter walking as the tops of Stickle Pike 375m, Fox Haw 385m and Caw 529m  are within easy reach as well as many low level footpaths such as the Park Head Road to Seathwaite.
It's also a handy spot for people who travel many hours to get to the Lakes, as its only 30 minutes from a motorway exit.

If you would like to stay there over the weeks/months ahead then it wouldn’t be a problem just to turn up. But if you want to let Stephen or Wendy know of your intention to arrive then the phone number is 01229 716213 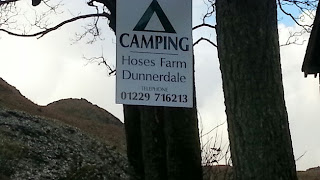 Site fee will probably be in the region of £5 per head. TBA.

£5 per head? I guess I better make sure I got some with me when I find myself in the area. Hope the sights are worth it.

Very cheap. Views are well worth it.

Now marked on my map.
Thanks,
JJ

Hi JJ. It's still an unknown site and is basic in the extreme. More like a wild camp but with the permission of the landowner. Its in a great spot. As long as backpackers bear this in mind then they won't be disappointed. The views are great too.