Friday night, driving from Seathwaite to Gosforth for a meal at Nicks place The Wild Olive it was chucking it down. We were staying with friends in Seathwaite and Alan (Not me), said he would drive and as he has a new 4x4 it made light work of the flooded sections we encountered en route over Birker fell.
It’s always a good meal here. In my opinion any way. The menu had changed since our last visit earlier in the year and i was a little disappointed that the Sangiovese beef was not available. I had roast Salmon which was very nice.
Post meal we had a couple of drinks in Gosforth Hall just to say hi to old friends. Then we headed back to Seathwaite and an early-ish night preparing for the Shepherds Meet tomorrow.
Saturday morning. Looking from our bedroom window we can usually see Grey Friar above the trees. Today it was completely clagged over and although it was just spitting with rain it did look promising.
This opinion changed as we went over Kiln Bank Cross on the way to Broughton Mills where this years Meet was being held. It started to snow. 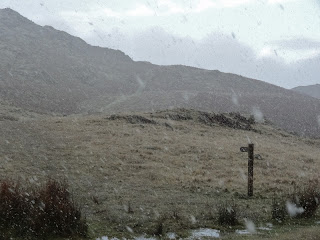 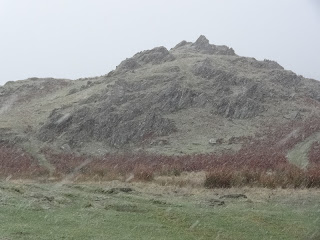 Our job at the event was to help out on the gate relieving folks of £3 a head for adults and children were free. It was compulsary to have one at least.
The field where the stock pens had been set up was very wet with the torrential rain that the area had seen during the past few days and weeks. But it’s a very beautiful valley and pleasantly the sun came out. Well in spells anyway. 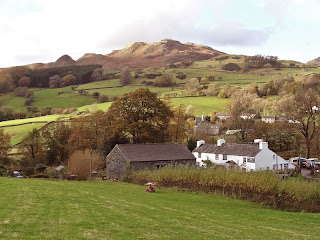 The Blacksmiths Arms Broughton Mills. Adjacent to the show field.

The pub provided a lovely lunch of Tattie Pot and red cabbage followed by Sticky Toffee Pud for everybody.
As with all farming communities there are many characters and it’s great to listen to the tales and old Cumbrian dialect that most still use. It can be quite hard to get the jist of the conversation if your not used to hearing it spoken.
In between gate duties we did manage to get some photographs of the showing and judging of the two main sheep breeds, which in these parts are Swaledales pronounced Swardul and Herdwicks pronounced Herdwick. Well it would be wouldn’t it.
During the day the weather was changeable, sunny, drizzle, rain, sleet and snow. So normal really.
A snowy rainbow was seen across the fields but unfortunately it wasn’t a snowbow. 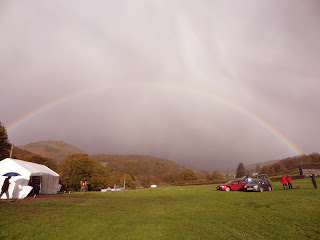 The sheep which had been washed and brushed prior to the show were now getting a bit muddy but i managed to capture a few shots of the cleaner ones. 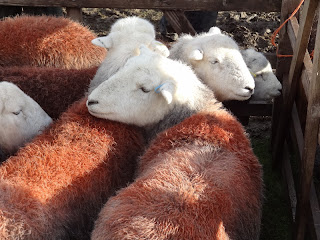 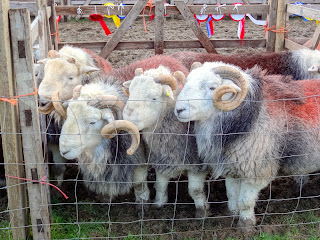 Many rosettes are awarded for individual classes such as 3 aged ewes, Shearlings, pair of gimmer lambs, 3 sheep in natural colour, Tup and gimmer lamb and many more. 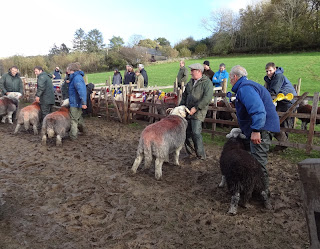 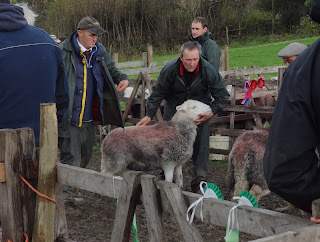 As well as the sheep showing, folks can also enjoy the highly contested hound trailing, the pets competition and shepherds crook making.
Photographs of previous meetings can be viewed in the refreshment tent where tea, coffee and cakes can be had.
The decision of the champions champion, that is the best Herdwick against the best Swaledale went to Glen Wilkinson of Tilberthwaite with his fine Herdwick. 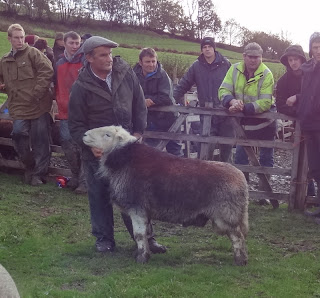 Glen Wilkinson with his Champion Herdwick

In the evening the Blacksmith’s hosts the singing competition and also some poetry is read. Excellent cask conditioned ales are purveyed and a good night it was too.
Thanks to Tina and Alan for putting up with us over the weekend and thanks to all who made the show such a pleasure to be part of.

More photo’s of the days events can be seen here.

I wonder whether those sheep enjoy being manicured, and are they given a food supply whilst undergoing their 'make-up'?

Hi Dawn,
Knowing what you did in the past i can understand why you would like this post. Thanks.

These are "Royalty". They could quite well go on a Curry walk.

I would have liked to have able to listen in to the singing competition. I went to Buttermere Fair a few years ago and the singing was tremendous.

It’s always good JJ. Completely different than City life. No pretentious twaddle. I was going to use another word but twaddle will do.
You would have been made very welcome.
Put it on your agenda for next year. It will be at the Newfield Inn in Seathwaite, Duddon Valley.

Great show! What does the winner get?

Prestige and the probability that the winners stock will fetch a good price at market.