Later this year well known shoe maker Inov-8 will be bringing out a thermal jacket for use during and after running, belaying or for the lightweight hiker who wants warmth at the end of the day for little space and weight in the pack.
My own current insulated jackets of which i have 2 that i use regularly are the North Face Zephyrus and the PHD Minimus.
The Zephyrus is a great lightweight jacket at 260 grams and goes with me everywhere. The Minimus is more for when the temperatures drop below zero.
The new Inov-8 race elite jacket is similar to the Zephyrus rather than the Minimus but offers a bit more. 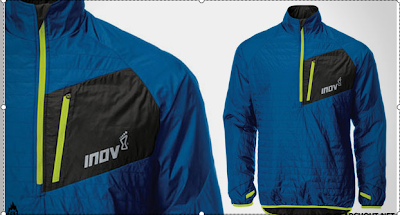 The Inov-8 race elite insulated jacket
The Elites insulation is PrimaLoft same as the Zephyrus but the outer is Pertex Quantum for optimum wind resistance, it also has a DWR applied for greater water resistance rather than a ripstop nylon on the Zephyrus
What's neat is that the jacket is reversible and offers two temperature capabilities. It does this by one side being stitched through and the other side being stitchless, increasing wind resistance and increasing thermal values by around 10% when required.
The hem and cuffs are lycra bound and have thumb loops.
The jacket has a deep chest pocket and central zip.
Weights.
An increadable 200 grams for the Men's and the Ladies weighs 180 grams. Retail is planned for Autumn 2013. Pity it isn't Spring.
Posted by AlanR at 4:45 PM