Today was a strange sort of day. I said yesterday, that we had a plan. We were going to walk to the Roman Aqueduct and then chill out.

According to the map the aqueduct was located just on the edge of town, within an hours walk. That seemed just the ticket. I had only brought my Inov-8 sandals, no waterproofs, etc etc. This was a holiday with a bit of walking, not a walking holiday.

So why am i sat here now, having done 25km and have a blistered foot and an aching body.
Well. After breakfast and before Nerja had realised that a new day had begun we were striding out along the narrow shadowed streets trying to find a sandwich shop and to buy a bottle of water. Just before the church of El Salvador we eventually found both.

The only people about were the homeless and they were still stiff and lethargic after a cold night, even the ubiquitous pooch was still asleep.
We found the road we were looking for, which headed north, towards the old east/west coast road before the new motorway had been built. It was all up hill as it would be, with our hotel being at sea level. Soon we joined the N340 and turned right.

According to the map we had, we follow the N340 for 4 roundabouts and then the aqueduct is on the left a little way up the gorge. There were no “trails” to it unfortunately but to be fair the footpath along the N340 is pleasant and the road is not that busy.

After 4 roundabouts there was still no sign of this aqueduct but the signage for the Caves was still with us. I said to Sheila that if we pass the caves we have gone to far. So that became the marker.
At the 6th roundabout we actually saw a sign for the aqueduct. We can only assume that extra roundabouts have been installed since the new motorway came into existence.

Just before reaching our goal and on the right, we passed a small but well built aqueduct. We guess it was the same period as the one we were hoping to find. 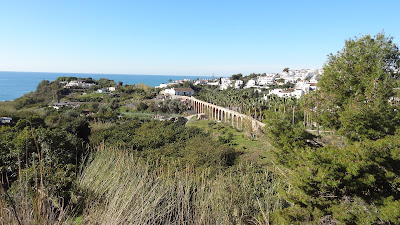 Eventually the N340 crossed a dried up river and behold stood the Roman Aqueduct. It was disappointing that we couldn't get to it. To touch it or see where the water ran.  All we could do was photograph it. 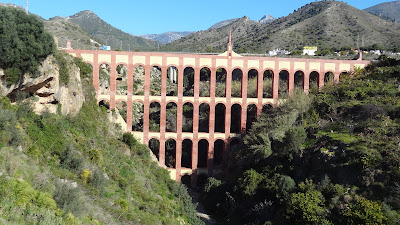 We was going to have lunch here and admire the location but it wasn't to be. The caves were just a short distance further and so the plan changed to get to them instead.
Another roundabout and then a short uphill walk brought us to the very grand entrance to the caves.
At this point we noticed off to our left a notice board with walking routes. It seems we were at the start point for the GR242. It seems that this is a 4 day walk over 64km of high country. I will find out more on getting back home. 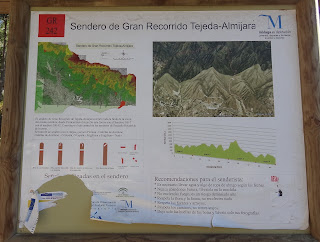 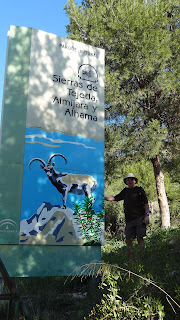 So we gave the caves a miss. The day was lovely. No wind and temperatures around 16 degrees C.
Shall we do 5km up the track, knowing we had to return the same route? Like i mentioned earlier, we were not prepared for walking trails. We had 500ml of water, half a sandwich and a tangerine. We set off to get as far as El Pinarillo and hoped that it didn't rain.
El Pinarillo is a picnic spot and was just about the right distance for us considering that by the time we got back it would be 25km in total.
The track is driveable and seems like it is very popular with the locals. For the walker in sandals it was quite painful.
The views made up for the pain and the pungent aroma of the Lavender was wonderful. 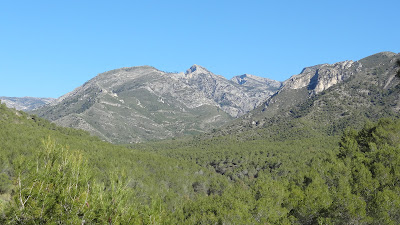 Our onward path is just above the tree line left of centre. 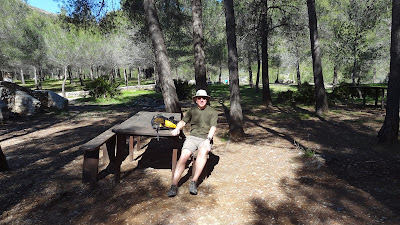 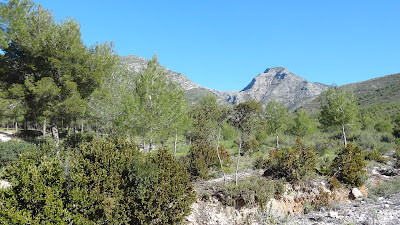 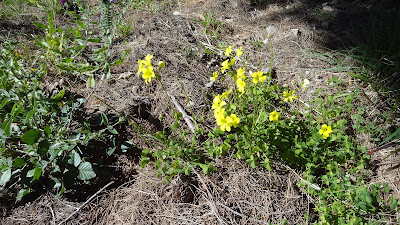 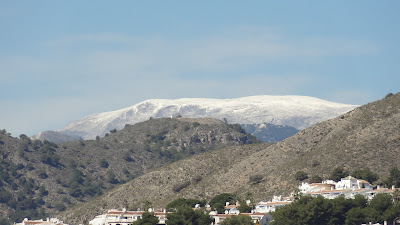 Snow on the tops 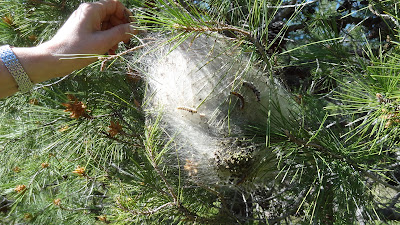 A massive cobweb with captured prey 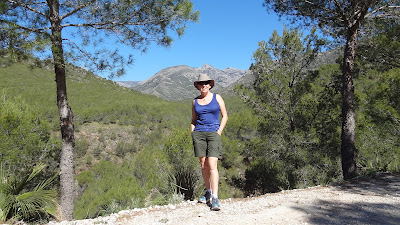 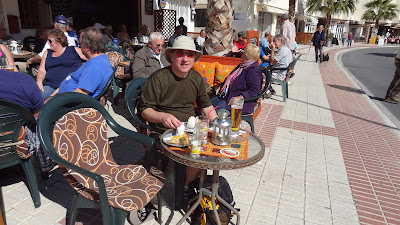 A good finish, Apple Strudel and a nice cold beer and G and T.
I developed a blister on the way down but it wasn't surprising considering my footwear.
Another beer and i won't feel it until morning.
A wonderful day out.

It demands many admirable qualities to turn a short walk into an epic. Well done.

Hi Conrad.
An Epic is correct. The admirable qualities i'm not sure about.

Don't know much about Spain, but blisters, I've had a few...

Hi Louise,
Aye, I had a few last night! What blisters.Ha
Today am aching.

Well done, both of you. I can picture you now under an azure sky sloshing beer down your necks. Enjoy it while you can and look out for those vertiginous aqueducts.

Have you got a crystal ball. Although we don't slosh much.