A message from fellow blogger JJ came through inviting me on a walk with Rick. I didn’t know that it was an LDWA walk, so i said i would go. You may remember the last outing with the LDWA which i posted about here and i was not very happy. However because Rick was leading this walk i decided to chance it. At least if JJ or Rick lead then you know its not going to be a stupid pace with no time for photographs and there would be regular breaks.

The walk was recorded on the recee as 14 miles and it was a circular walk starting from Higher Walton  near Warrington. I suppose i better mention that it’s in Cheshire or else i might get points deducted.

Up at 5.45am to get the bus into Manchester, then a quick breakfast and then on the tram to Timperley where JJ picked me up at the station prior to picking up others and making our way to Higher Walton.

It was quite a shock to find the turnout was 19 souls. I think 8 - 10 was expected. We even had one chap from Devon with us.

The day started a bit chilly as we waited for the 10.00am kickoff and just as we were assembling for the group piccy another soul turned up. Good job we were a minute or two late setting off. 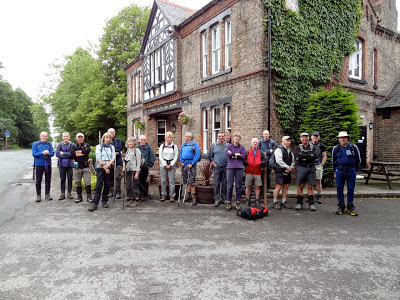 The motley crew raring to be off.

So off we went and quickly came to the towpath on the Bridgewater Canal, part of the Cheshire ring circuit. We followed this with nice views across open country with only the Fiddlers Ferry power station water cooling towers blighting the view. Further along through Moore we passed the Daresbury Science Park with its plush facilities for dinning on view.

Leaving the towpath and waiting for the back marker, Rick told us that we were going uphill. There was a sigh,”a hill?” on a Wednesday walk. It wasn’t a big hill, just a pimple really. But a hill in Cheshire. It was Daresbury Fir a massive 70 odd metres high. 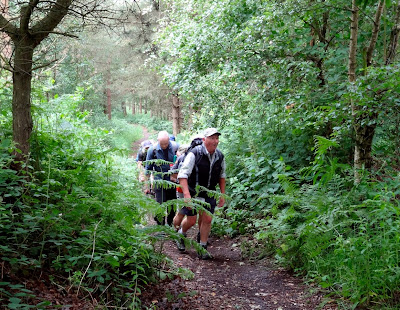 Top of the Hill
Over the other side there we met the minor road in Daresbury. It’s lovely church was a good place to stop as did Charles Dodgson better known perhaps as Lewis Carroll’s father. He was vicar here for 11 years. There is a Lewis Carroll centre and the church has some beautiful stained glass and a very important loo. The old court house is interesting which is just across the road as is the pub of course. 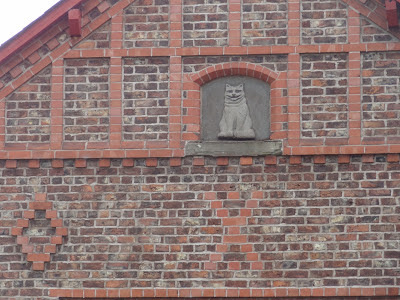 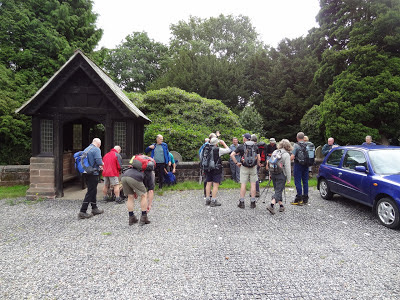 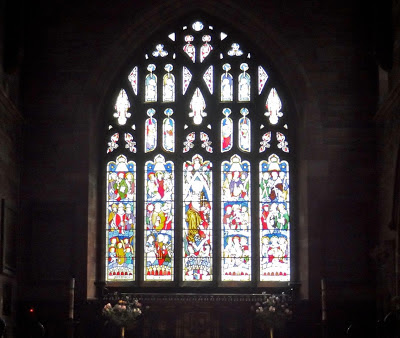 The main Stained glass window in the church

We didn’t waver and missed out the pub.

Through Daresbury we joined the Mersey valley way, walking past some very posh property and eventually reached Appleton reservoir via Row’s Wood. Just as we crossed Warrington road i checked the GPS only to inadvertently switch it off. So i had to wait then for the satellites to be located again. I wish there was a warning on the Satmap 10 that asks "Are you sure you want to switch off.” I do this regularly and its a real pain in the bum.
Anyway onward. Through Bellfield Farm and Hill Cliffe passing one of the most well kept cemetery’s i have seen. If you can call a cemetery stunning well this was it.

Good views across to Winter Hill and a nice grassy bank alongside the older cemetery was where we stopped for lunch. A very pleasant 20 mins was had and JJ handed out Tea loaf. He made it all himself too. Thanks JJ it was very nice. 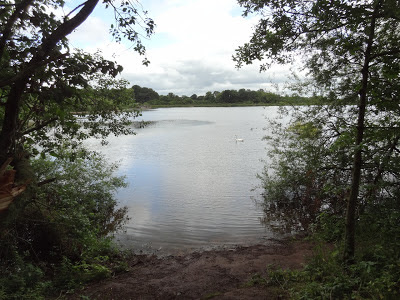 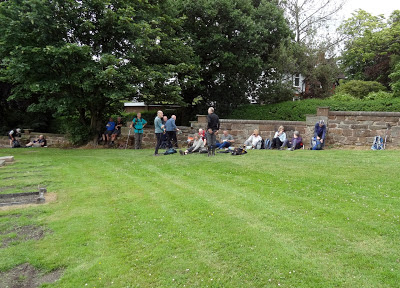 Lunch
Nobody was in any rush to get going again but slowly we packed up. The day was almost summery now. A short section of road walking amongst more very posh houses took us to a dell and some shade.
For a second time i switched the GPS off by mistake and cursed the software designers as well as myself.

We followed the Dingle for a while passing Witherwin Farm and onto the Mersey Valley trail again.
We stopped again in Grappenhall for a brew. Overlooking the church with its Cheshire cat perched high on the west side of the tower. The pub next door was being renevated as it seemed was most of the village. Its a very nice place to live thats for sure. 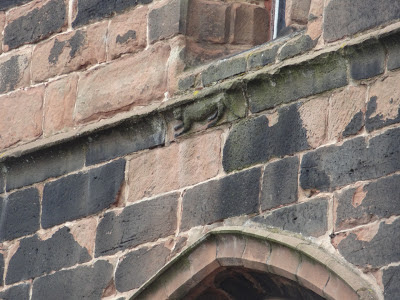 The Cat on the tower
Another short section of road brought us alongside the canal again and followed it through Stockton Heath until we passed Walton Hall. One of the party, name slips my mind but it seems he used to play here as a lad and he wanted to have a look at how it had progressed in all these years. And so we did.

Its a very nice place with a heritage centre and a cafe. The flower beds were blooming and colourful. The gardens well manicured. There was an old Crystal Palace style greenhouse that looked like it was being renovated or knocked down. Not sure which.
Its well worth a visit and i’m glad we did. 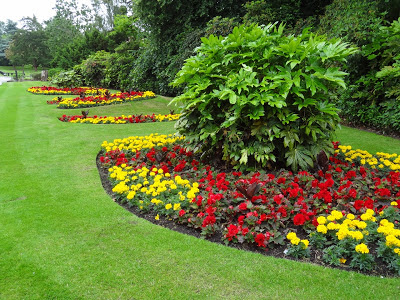 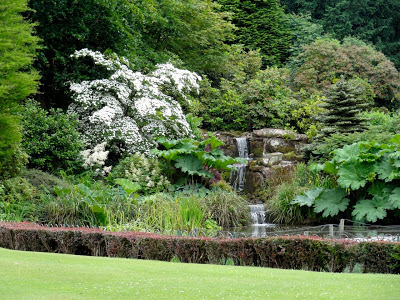 More Gardens
A short walk again along the towpath and we were back at the start. A quick pint in the pub and then home.


The route was 14.5 miles long and extremely pleasant, in good company. The weather stayed kind to us all day. Thanks Rick for one of the best LDWA walks i have been on.

Oh i nearly forgot. JJ has some new shoes La Sportiva Raptor’s. A bit bright but most of us had sun glasses. Good job he stayed at the back. 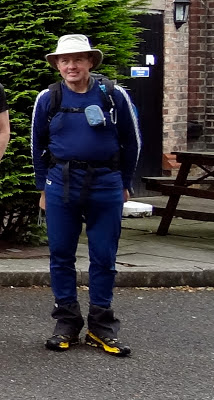 Some photo’s of the days walk can be found by clicking here.

Another cracking day out c/o the Timperley Crew...finished off with a perfect pint of Golden Hen!
Not sure about those shoes though....and I really need to lose some weight.
JJ

No probs John. Buy another pair whilst they are cheap. I've bought a pair off welding goggles.

Lovely day out, Alan. Much better than the previous LDWA walk.

Hi Maria.
It was a great day out. Really enjoyed it.

Crumbs! Those shoes are Bright! Are they really fitting for such a portly chap? Time will tell. ..

I tell you Martin if they are still available at such a discount price when you get back then get some. You will not regret it.

I know what you mean about the LDWA, they are pretty hardcore, but they are a really good bunch. We did the Alwinton Round earlier this year (http://www.aboveandbeyond.co.uk/blog/alwinton-round-2013-report/), not an LDWA event but a lot of members of the Northumbria LDWA involved as well as the North of Tyne Mountain Rescue of course. They really put me to shame with their fitness and hardiness.

Glad that you enjoyed a more pleasurable experience this time around.

Hi Martin,thanks for reading and commenting. I agree they are a good bunch. Maybe its my own fault.
I was not alone with my thoughts though. There was about 6 others with the same opinion and they are LDWA regulars. It was all down to the back marker not doing his job.