Readers will have noticed over the last couple of years that i became a member of the Timperley Curry walks that always terminate at This N That eatery in Manchester.
It's open to anyone really who wants to walk and chat to JJ, Martin, Rick as well as others who come along as commitments allow. And of course you need to enjoy a curry and a beer after.

What is surprising, no, amazing in fact, is just how much greenery can be found within the spokes we have walked from outlying areas into the centre of Manchester. For someone born and bred in Manchester i have had my eyes opened to the natural beauty and also the industrial and social archeology that prevails.

Today's walk was to follow the River Irk as much as possible and started from Heaton Park Metrolink station. The Irk starts it's life in Royton, Just north of Oldham and meanders it's way through to Victoria in the centre of Manchester where it joins the River Irwell.
For me our start point meant 2 busses had to be caught and then a walk from the south side of the park to the north side to meet up with the crew from Timperley who would be alighting the tram at 10.15am.

Heaton Park.
It was quite a nice morning, a little chilly but calm and with good prospects for improvement. I could just make out the mist rising from the overflow lake or the boating lake as it's better known.There were a few runners and dog walkers about as i made my way into the park via the Middleton Rd entrance, down the tree lined drive and past the old tram stop. Once at the boating lake it was good to see that the cafe was still open and with quite a few customers considering it was relatively early. (9.30am). The smell of breakfast cooking was a temptation but i resisted, took a couple of photographs and moved on. I still had a 15 minute walk to the tram station to do.

Heaton Park is quite well known for it's pop concerts and running races, it's charity events and it's a pleasure to walk round, it's also one of the largest municipal parks in Europe at around 640 acres. There is lots to see and do here and it's run by Manchester City Council. The website is here.

The park also contains the colonnade from the old Manchester Town Hall but we didn't pass where it has been re- located on this walk. 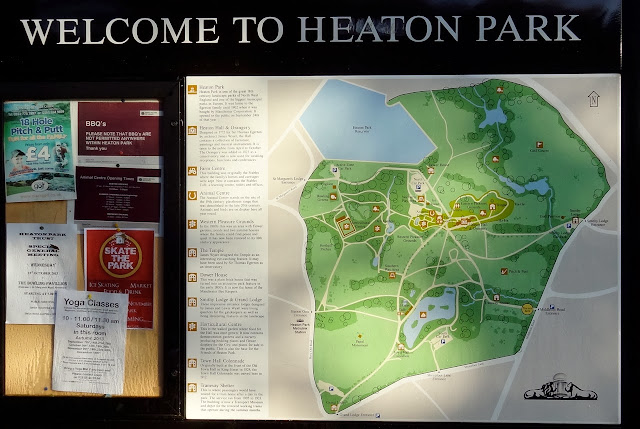 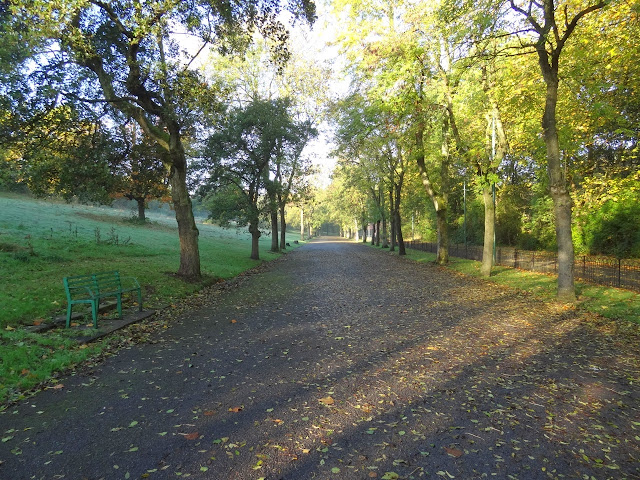 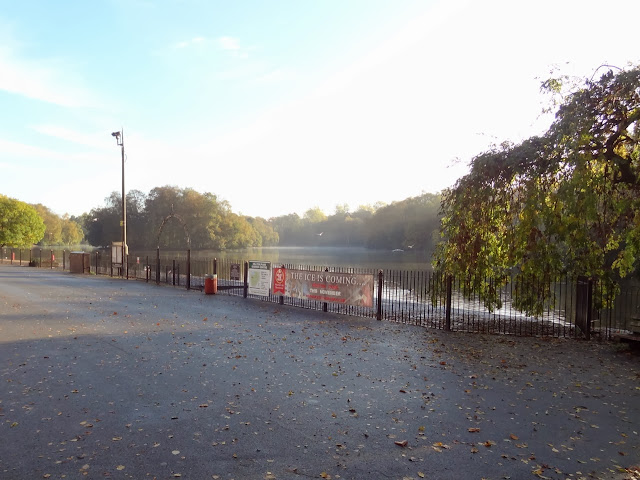 (The boating lake)
Once at the Metrolink tram stop i had a 15 minute wait. I thought there would be a sandwich shop nearby and i was correct. One bacon muffin was had whilst passing the time until the others arrived.
It was good to see JJ, Rick and Martin. Martin was still suffering which a muscle problem which i must say looked quite painful at times.
We set off back through the park with Rick in charge of proceedings. The sun was now up, strong and bright and the sky as blue as it could be and considering we are in rainy city, we had no heavy clouds. 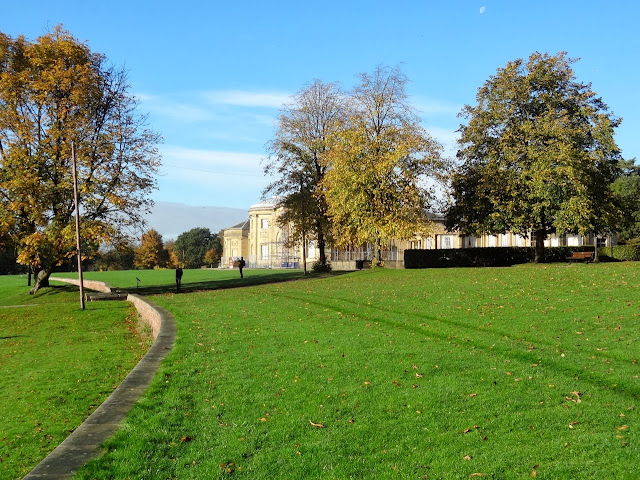 (Heaton Hall)
The walk back through the park was enjoyable with JJ and Martin taking numerous photo's which i am sure will be available to view on their own posts of this walk. 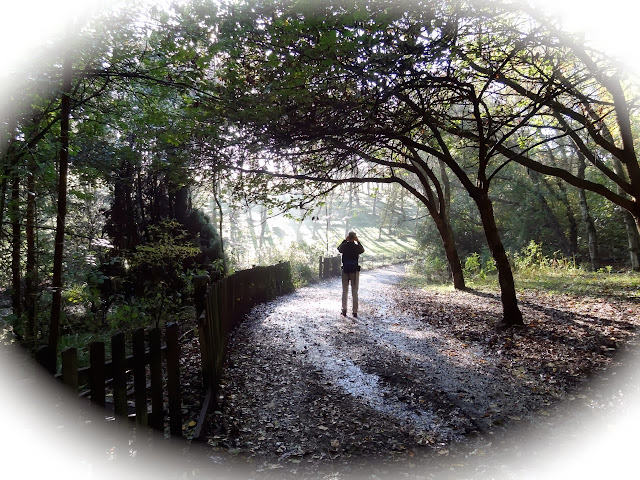 (Martin stayed still just long enough for me to get a photo.)
Just prior to exiting the park via the Smithy Lodge, by chance the golfers cafe was open and so we had to indulge in a swift coffee. The bar was open and JJ spotted a ghastly ale pump. Joseph Holts "Smoothflow" bitter. Those words, "Joseph Holts and Smoothflow should never be said or seen within the same sentence.

Anyway, we managed to get going properly and crossed the very busy Manchester to Middleton main road where after a bit of searching we found the path along the North bank of the River Irk. It was flowing quite strong and a walk through the deciduous forestry a pleasure. This area is known as Blackley Forest Nature Reserve. Until today i had never heard of it and just how nice it was came as a bit of a shock. 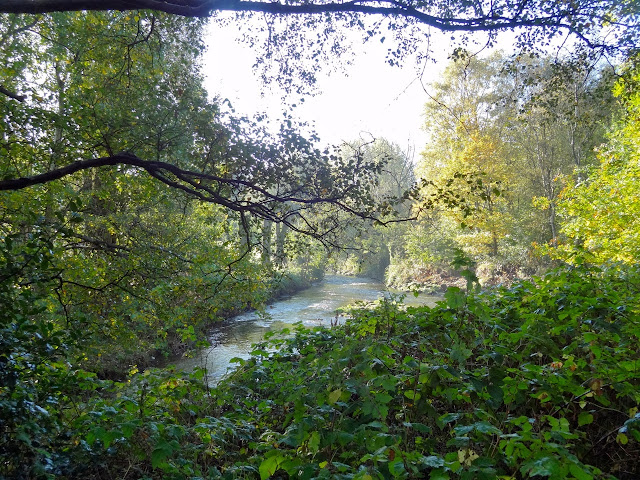 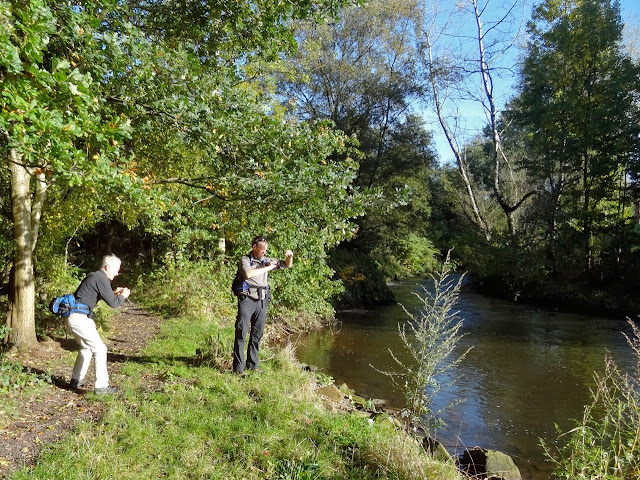 (2 images above. Following the River Irk through Blackley Forest Nature Reserve.)
We came through the forest at Blackley road which we followed for a few hundred yards to pick up a footpath through Blackley Vale. The path led to a bridge over the Irk which would have taken us into Crumpsall but we were trying to follow the river as near as possible. The route led us back up to Blackley Rd and Delauneys Rd from where we could get back to the river side. 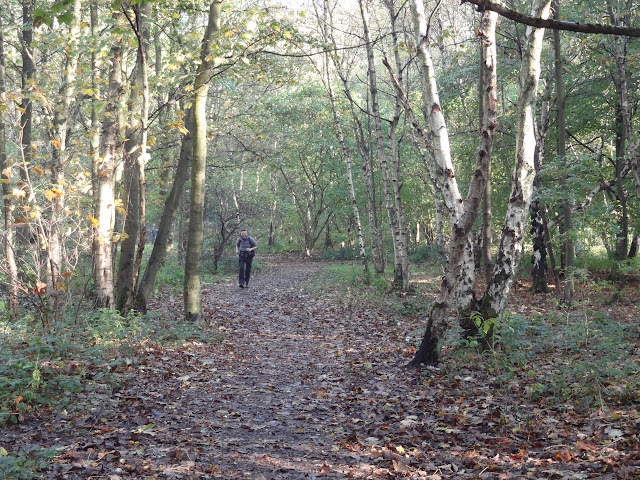 (JJ showing that his running days are not over or are they?.) 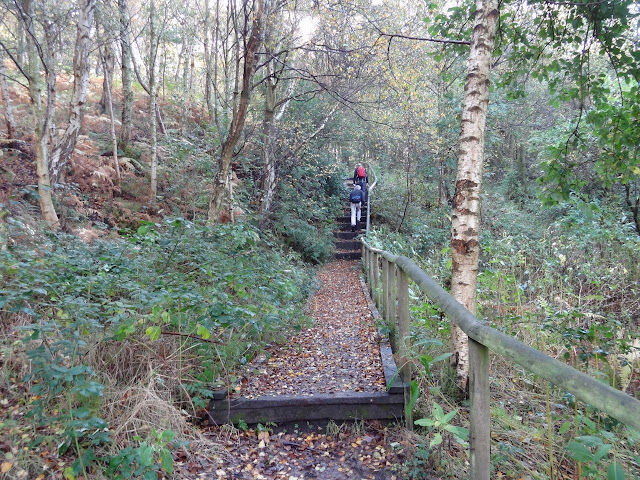 We had to leave the delights of the woods due to a new housing estate near to Blackley Village. The massive building Hexagon Tower dominates the skyline. The home of Scientific Innovation. 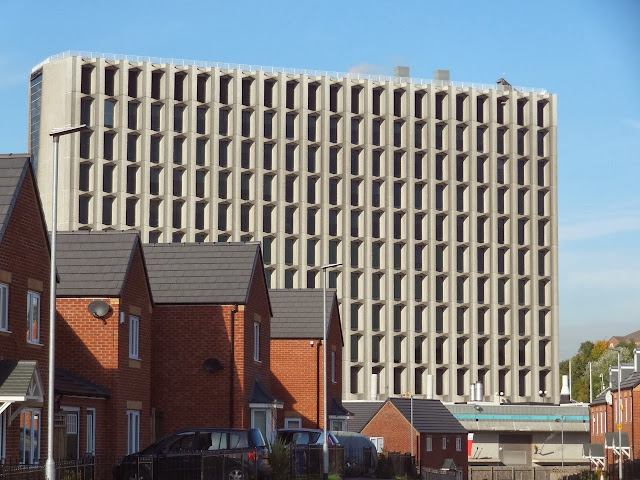 (Considering how long this building has been here it is in very good condition. It was formerly owned by the giant ICI corp.)
As we came out through the estate, which was actually quite nice and quiet the path was a little difficult to pick up. Martin and JJ found one route while Rick and Myself found the "Gates" as was on the route map. It led through a number of ponds at Harpurhey which were all quite "filthy" with dumped waste materials. A shame really as this could be made to be a very nice nature reserve.
We passed the Smedley Hotel which was looking quite smart before entering Hendham Vale and Queens park. 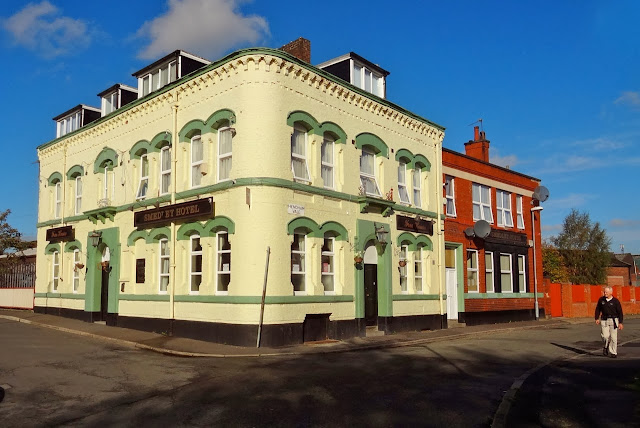 (Smedley Hotel)
Queens Park was one of the first Municipal Parks created in 1846 designed and laid out by Joshua Major. There used to be an old hall here but it has now been demolished. Someone decided it was a good spot to have a brew. Martin handed out the chocolate brownies and I had 4 pieces of Sheila's fruit cake. A lucky guess at the numbers. 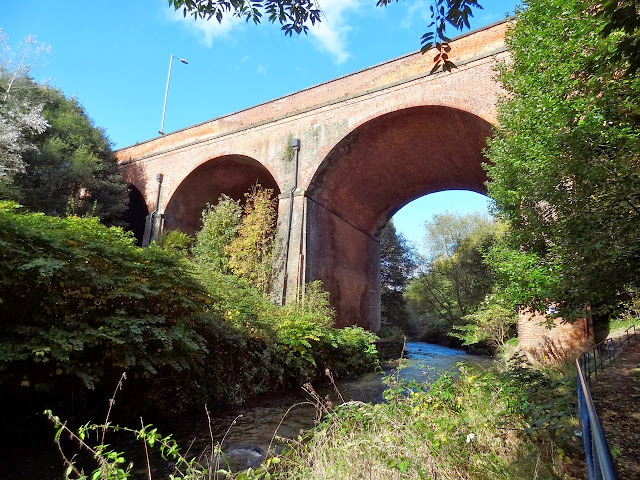 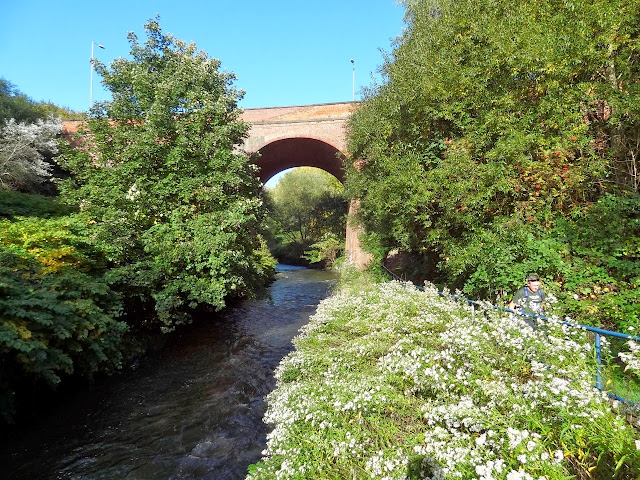 (The railway arches over the Irk at Queens Park)
At this point we thought our route into Manchester had been thwarted. The path had a "Footpath Closed" sign but no explanation or detour. So i stood ceremonially and declared the footpath open. We had no problems getting onward. 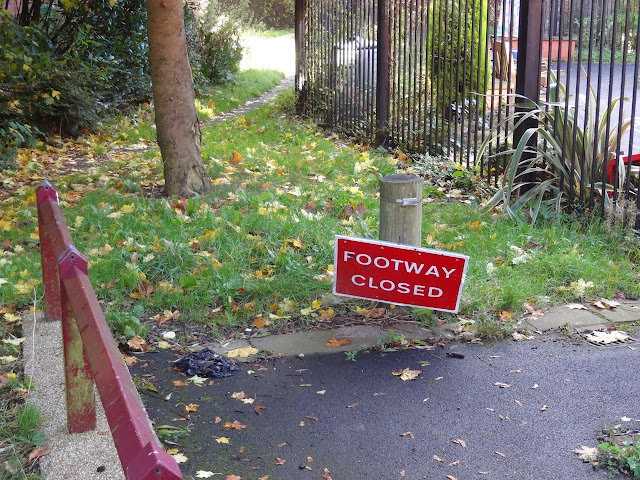 We were closing in on our destination. Rick had a couple of points of interest he wanted to see which were Sandhills and Angel Meadows. I admit i had never heard of them.
Heading along Danzig St. we came across the unusual sight of 1/2 a submarine on end. It is described as an absurd piece of Jules Verne style imagery symbolising "emergence". It has nothing to do with war and it's named "Dreadnowt".  It's painted by HMG paints and is used to commemorate events like the Olympics, England etc etc. 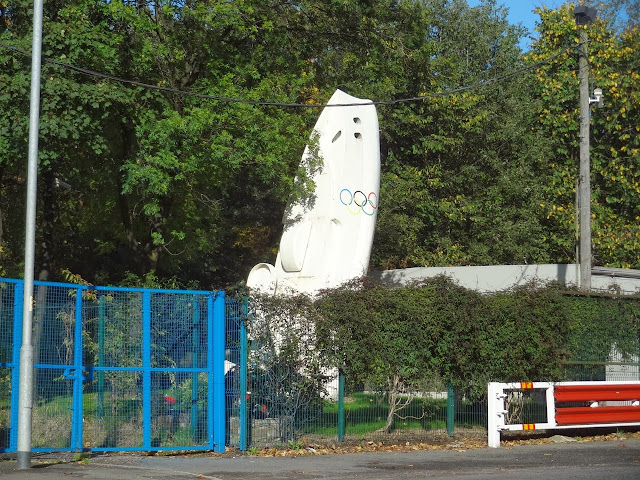 (The "Dreadnowt")
We now made our way upwards along sandhills. Rick explaining that this area was where the stone was quarried for Manchester's St Ann's church and also the Roman Fort at Castlefields. All very interesting.
We emerged at Irk Street with its fine arched brick railway viaduct. 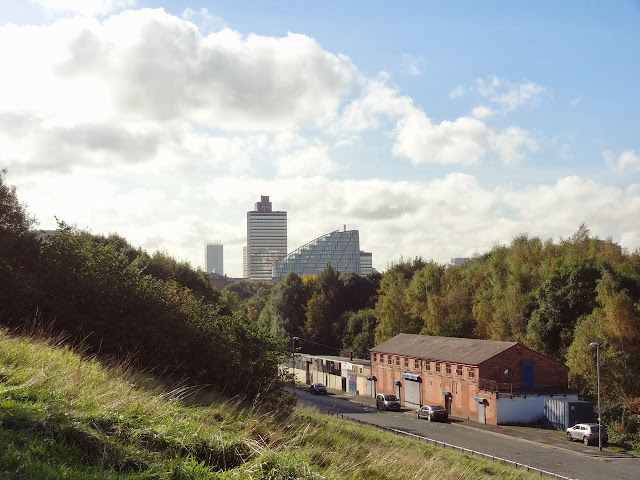 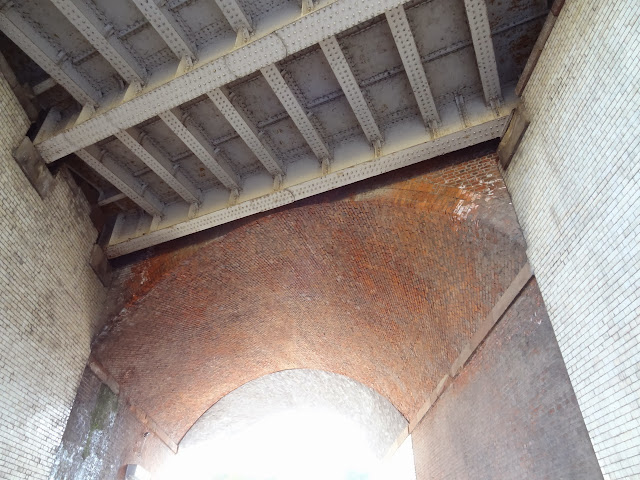 (The arch at Irk St.)
Under the viaduct we turned right past a number of car repair garages, down some very old stone steps, across a corbled yard and up more old stone steps to reveal what is now a small public park known as Angel Meadow and St Michaels Flags. Again i did not know this park was here. And so close to the city centre. The area itself in years gone by was a very affluent area. That was until the Industrial revolution which then introduced poverty and squalor. 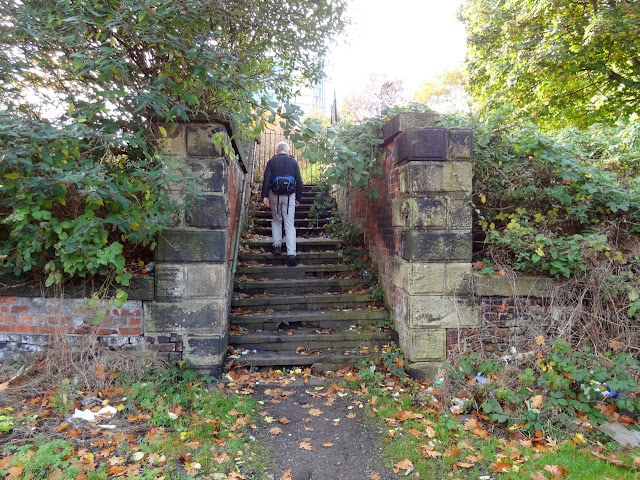 (One of the entrance ways into Angel Meadows and St Michaels flags)
The church of St Michaels and All Angel's was built in 1790 and was said to be one of the most ugliest churches built in Manchester, in a notorious and overcrowded part of the city.
The land adjacent to the church was to become the largest cemetery in Manchester. Used to bury those with no family place or the poorest of the poor.
There were also institutes for abandoned, neglected and destitute children and one of them still flurishes as a teaching facility today. The Ragged School for working girls. 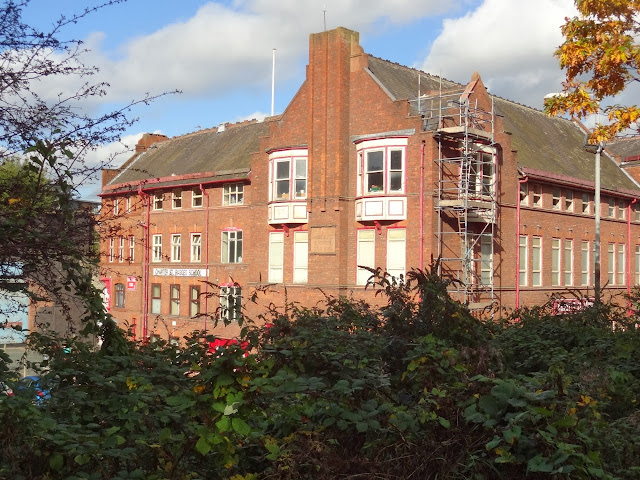 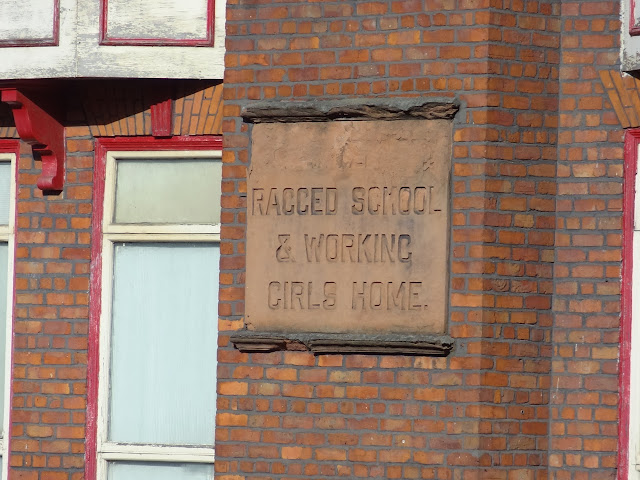 (Zoom shot of the wall plaque) 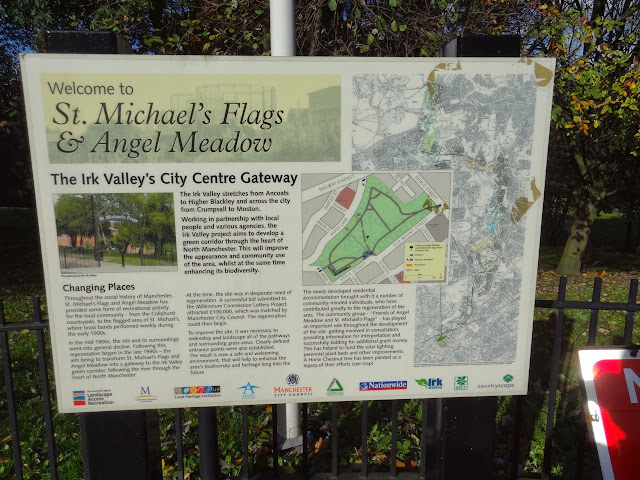 (The rejuvenation information board) 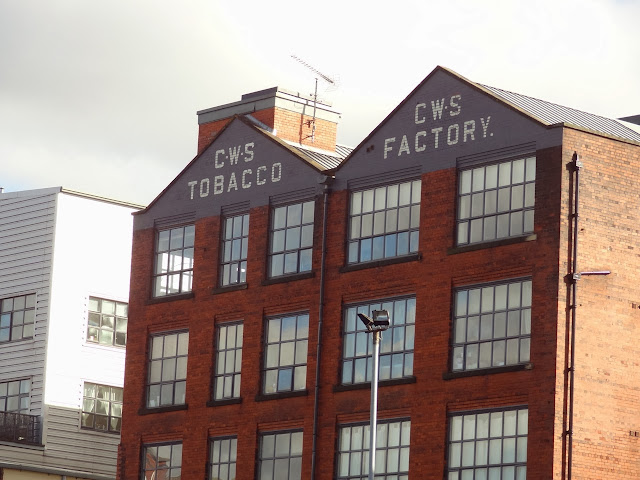 (Nice to see the old factory has been modernised and is now apartments).
This is a very interesting area of old Manchester but sadly we had to move on. Our route now took us past the fantastic new CIS building. Only recently finished and looking in my opinion one of the finest modern buildings in Manchester. How CIS managed to acquire the funding when they were 700 million in the red is a bit of a mystery. I'm sure you and me wouldn't get funding if we had no money. 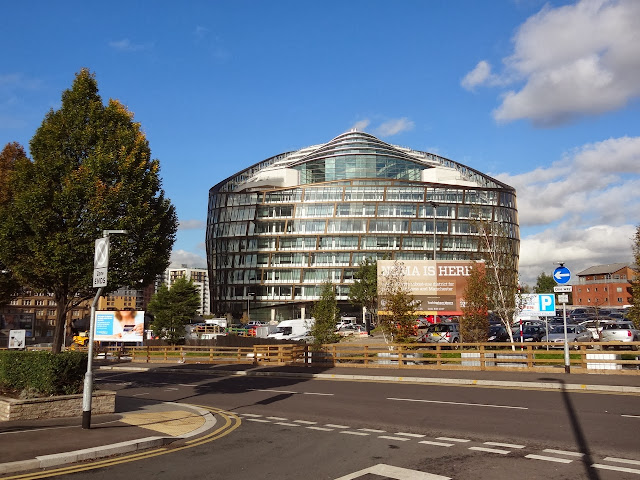 (The magnificent new CIS building)
I should have taken a shot more from an angle as this photo doesn't show that the upper terracing and smoke stacks very well. From some viewpoints it takes on the look of a large liner.
When i look at the ugliness of Beetham Tower and No.1 Piccadilly, this building is so architecturally pleasing.
Upon arrival at This N That i thought we might not get a seat. It was as usual, very busy. But the good thing about the place is that it's mainly full of office staff that have to get back to work. By the time we were served we had a table.
I had 3 curry's, chicken, lamb and spinach and a mixture of boiled and pilau rice. Cost £5.
Once again we all slipped up and forgot to get a photo. Next time we will.

Our onward and last port of call was my favourite pub in Manchester. The Ape and Apple. (But keep that a secret). We didn't make an afternoon of it, just a taster before we went in our separate ways.

A most enjoyable route on a lovely day in great company. Thanks Rick for putting the route together.

Note.
I will put a map here.  I am currently having problems with Satmap and Apple's OSX Mountain Lion software. Hopefully it will be resolved asap.
Posted by AlanR at 7:47 AM

Sounds like a rewarding walk.
The last time I had a pint of “smoothflow” it had a head that looked like a creamy coloured marshmallow which had been separately plonked on the top, and it remained as an entity in its own right, ending up in the bottom of the glass when empty. Proper beer should have a head that dissipates down the side of the glass as you drink leaving a pattern like very fine lace.

Looking at last week's weather I think we chose the best day to do that walk - the bright sunshine and freshness of the morning were just perfect for it. Like you, I never fail to be amazed at what we have on our doorsteps.....it makes you want to go for a curry. And a beer.
JJ

Hi Conrad,
A very nice walk.
I couldn't agree more. Holts beer is so good i don't understand why they want to produce rubbish like this.IMO.

A fascinating walk and with loads of social history thrown in, nice one.

We had a good walk Dawn. Lots of interest along the way.

Your right JJ. It was a lovely day. If only we had more like that. And just think, if we didn't do these Curry walks we would miss all this history and interest. The things we have to do to make others aware. Lets get the next installment planned.

Curry and beer, mmm... And nothing wrong with the walk, either!

Yes a lovely walk and the aroma of the curry kept us moving. In more ways than one.