With only a couple of hours to spare on Sunday we did what we don't usually do and that is just to bag a trig point. We parked up at Trough Gate, Britannia, not far from Bacup on the small car park opposite the old Travellers Rest pub which like so many other pubs, has gone to the wall.

The Travellers rest is famous for being the start point of the Coco-nut dancers route to Bacup at Easter. They are a troop of clog dancers and you can read all about them here. (Only if you want to of course).

Crossing over the main road we followed the old cart track behind the pub and goes in the general direction of Hogshead Law Hill. It was a warm sunny day with fantastic clear views in all directions. The route doesn't go all the way up the hill but turns SE. The track is the access way for a few remote farms. It must be quite bleak out here in the winter. 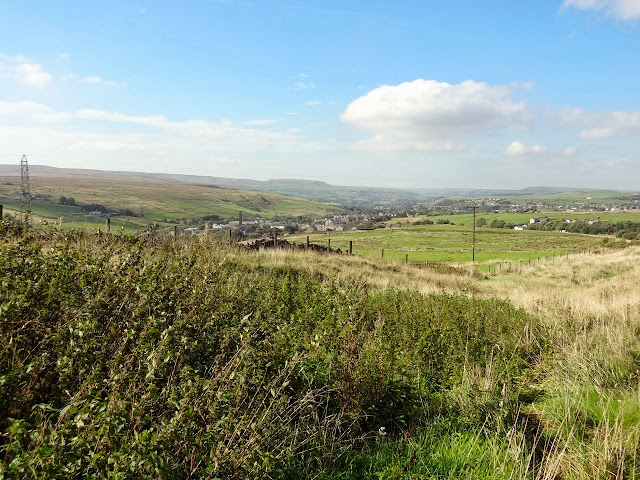 {Bacup in the centre}
Passing through the yard of the first farm we exchanged pleasantries with the owner and noticed quite a few signs around letting people know that the land was private and that it didn't have right to roam access. So we made sure we stuck to the paths. There were quite a few rare breed sheep about too. 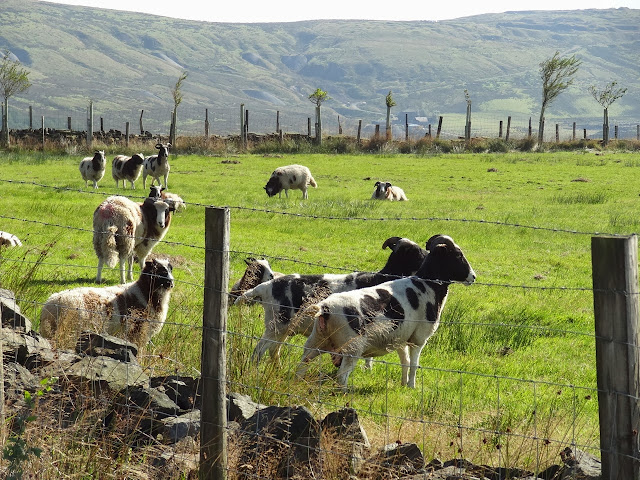 It was good to get off the track and into open country where again we skirted behind a second farm which was under renovations. On such a pleasant day we would have expected the builders to be on the job but there was nobody around.

As we gained height the breeze picked up. We had been walking in the lee of the wind but now that we were close to the ridge line it was really strong and quite bitter. Crossing 2 more fields we reached a large stile over the wall which marks the Boro boundary. On the other side there was a radio tied to the fence. What it was doing there is anyones guess. 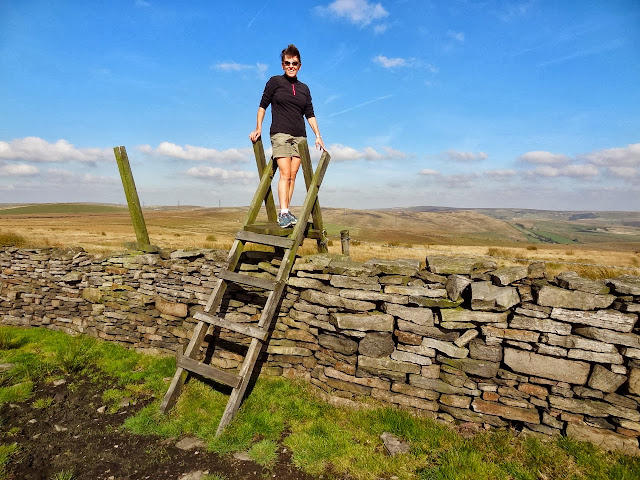 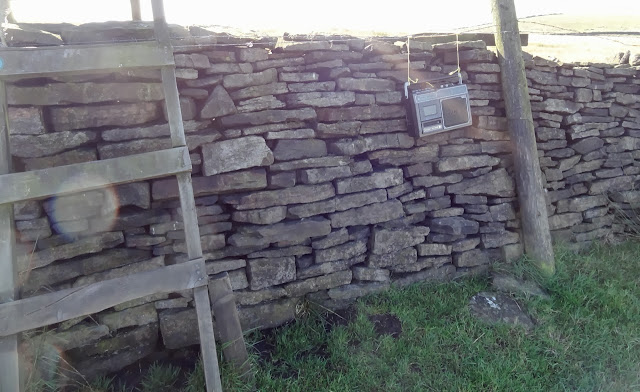 It wasn't long before our target was spotted. The trig point at Freeholds Top (Marilyn) 454m (1490ft). It was just a case of following the boundary. 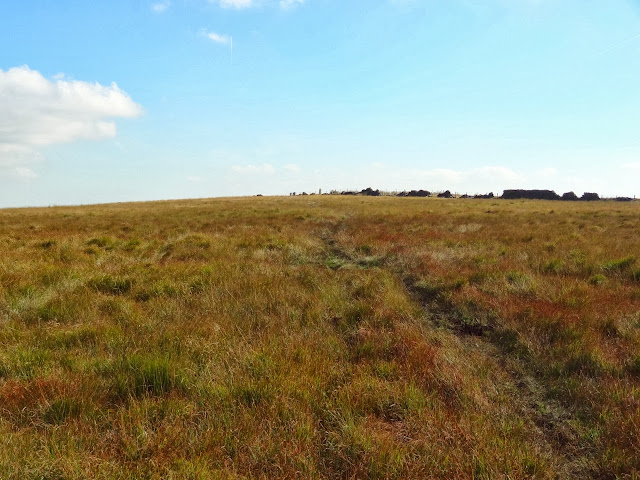 I took a few photo's at the top then quickly got ourselves behind a wall out of the wind. 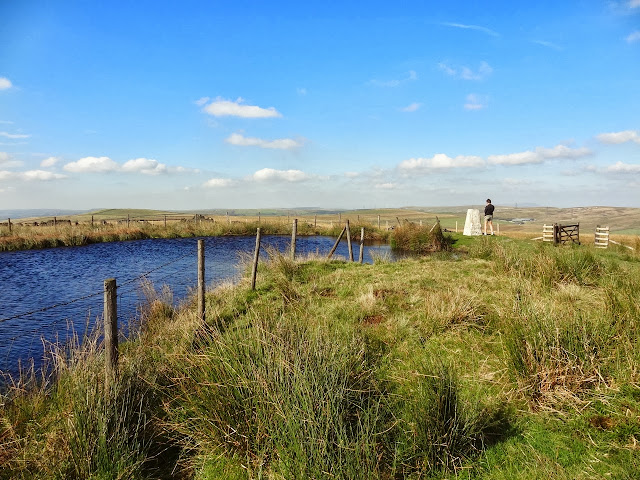 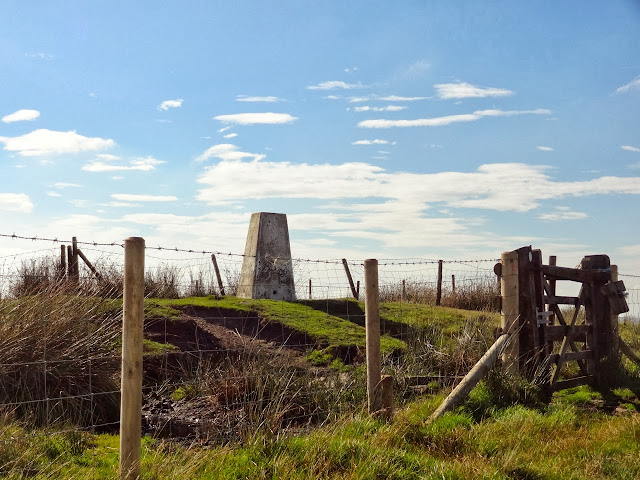 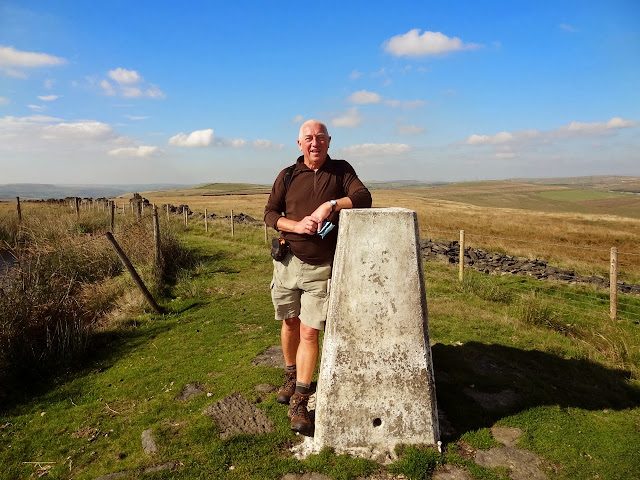 After a few minutes we were startled by a dog, we never heard it coming and it was a bit of a shock being close to a growling dog. Fortunately its owner was not far behind.
She called it away and she said she was glad to be at the top. I guess she had come up the steep route from Walsden area. She didn't stop and headed off on the track north of Gorpley reservoir. 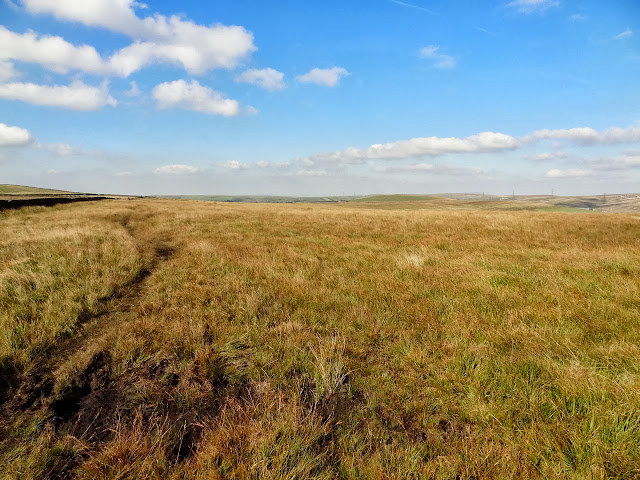 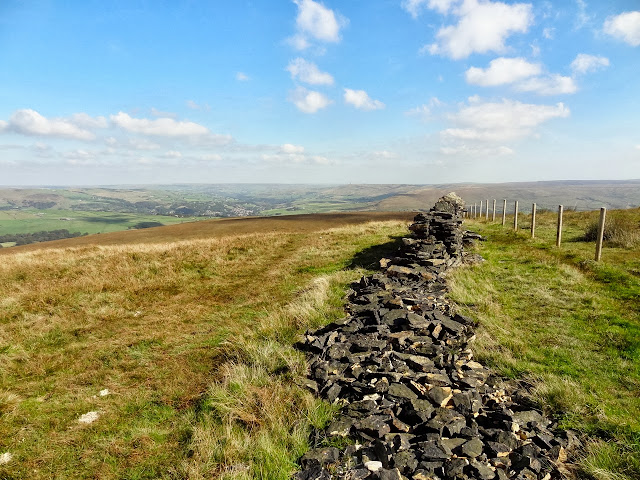 {The view East with Stoodley Pike just visible on the far ridge. (Centre)} 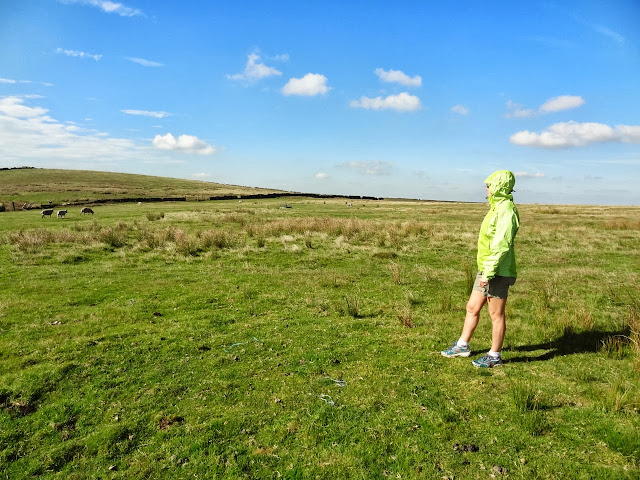 So we had done what we intended and headed off back. We had to put our outer shell jackets on. The wind was numbing. It was good to drop down again into the lee where the sun was hot and the jackets came off.

A very pleasant couple of hours.
Posted by AlanR at 1:29 PM

Some lovely views there Alan. It fair gives me itchy feet!

Hi Dawn,
Yes its quite picturesque if you like open moorland. Pity that it was just a quick visit on such a clear day.