(Wednesday 30th October) was quite an autumnal morning, a bit nippy when standing around but nice when moving. It was clear and blue skies with the odd cloud. Rain was forecast for later in the afternoon.

Todays walk came about after an email from Martin. I was a bit busy trying to sort out Satmap and also my new printers Continuous Ink supply system which was leaking badly. I decided it might be a benefit to leave it all behind and go for a walk.

So once all 12 of us and 2 dogs had assembled in Adlington off we went at 10.00am. The route of the walk had kindly been put together by Reg from the LDWA plodders.

Leaving a housing estate behind we soon hit tractor territory with this fine condition David Brown. 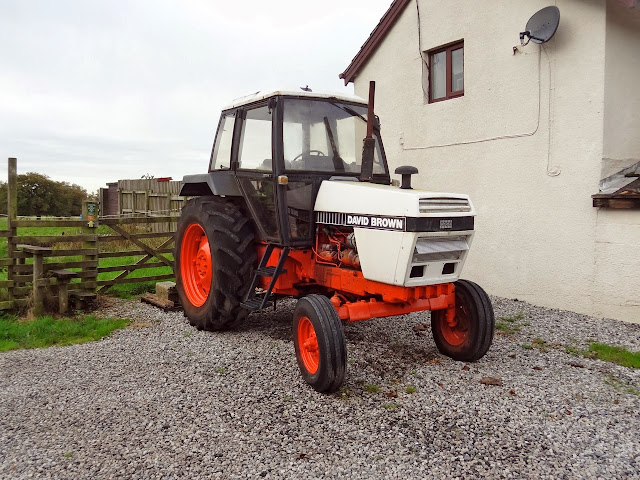 David Brown 1390 2wd tractor in good condition.
Progress was made along pleasant green lanes and manicured fields where we turned left (N) along Long Lane for a short distance before crossing the M6 motorway. We had good views across to Winter Hill and Rivington pike. 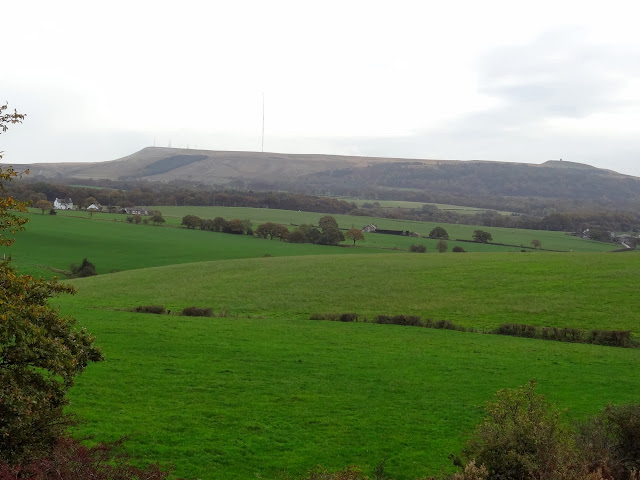 The well known landmarks of Winter Hill and Rivington Pike.
We passed some rather splendid houses which Reg informed us had been built on what used to be Heath Charnock Isolation hospital for patients who had illness's like TB. The air being clean in these parts. Now passed by the M6 and the hospital is no more. Opened in 1901, It closed in 1982.
A little further on we crossed the infant River Yarrow by a splendid footbridge. 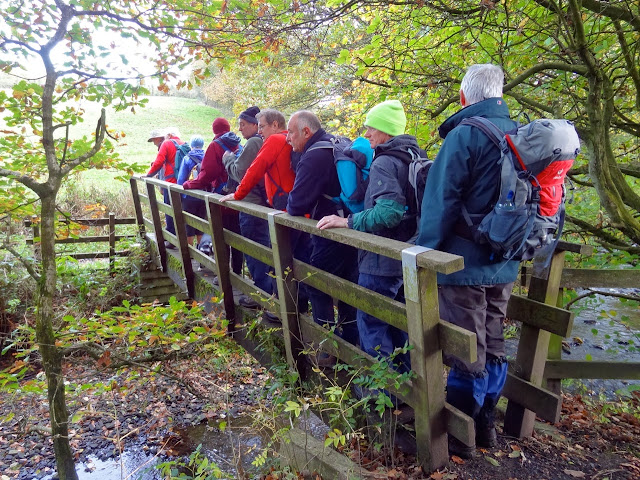 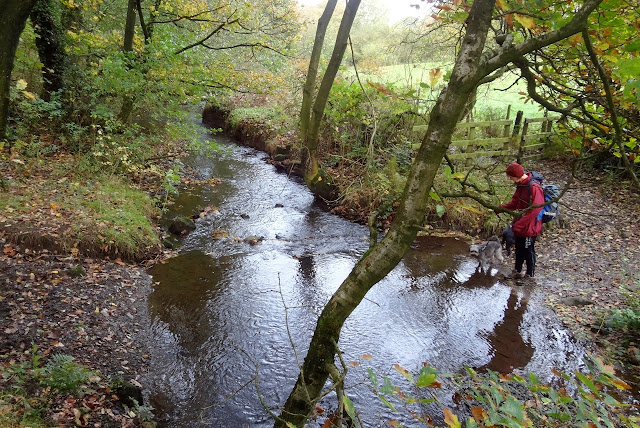 Splendid views were had passing Anglezarke reservoir and across to Anglezark moor and Lead mines clough. 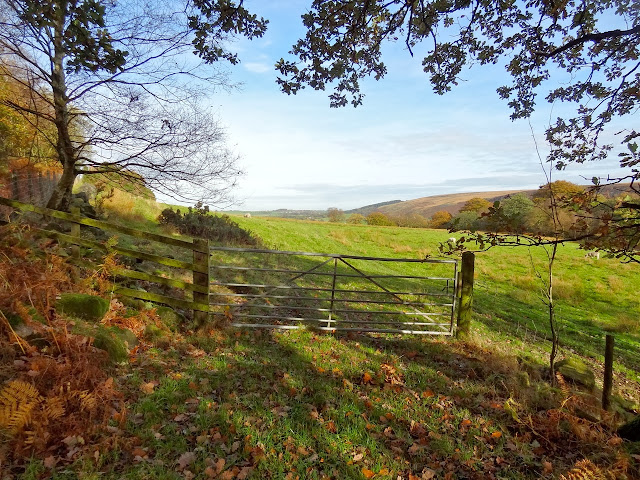 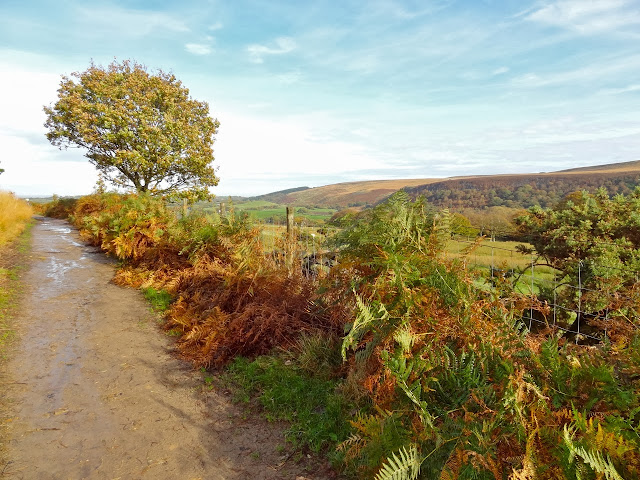 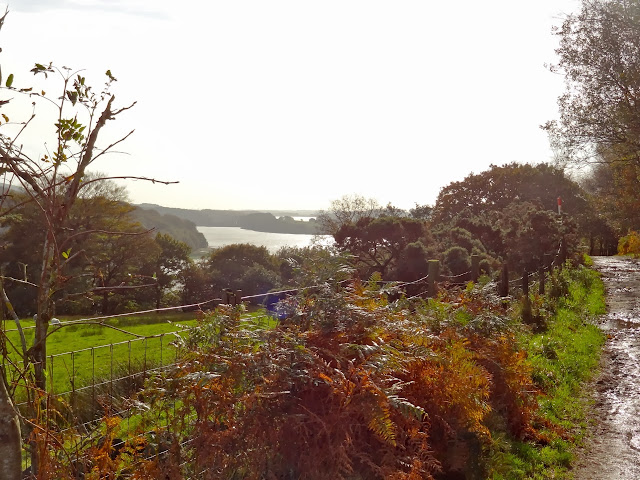 All too soon this pleasant green lane became a minor road leading towards Heapey and the disused railway line. Once again Reg had a story to tell of secret storage depots for retired steam engines.
It was all quite fascinating and if you have time to watch the video its here.

There was lots of passing old railway lines and sidings and railway buildings, platforms, bridges, memorabilia etc but Brinscall was our next port of call and this was the pinnacle of the day. A fish and chip shop that Reg had previously arranged with the owners to be ready for mass onslaught. Well i think it was eleven of us for lunch anyway, (with two possibly sharing). And very nice it was. Fish and chips £3.80.
However we had some muddy fields to get through first. 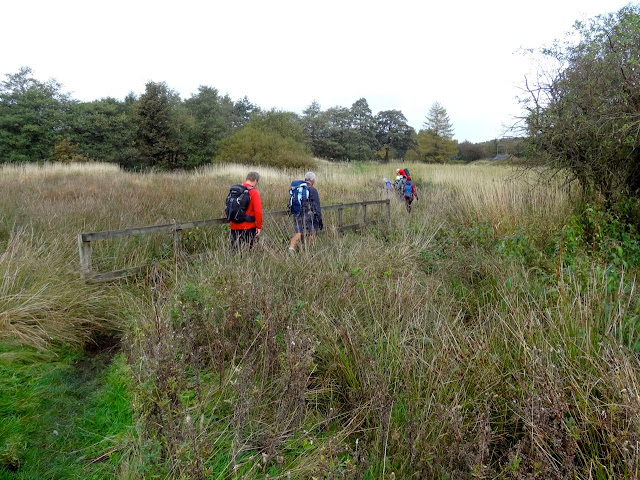 We sat in the park and devoured said luncheon. Brinscall is a nice place with its reservoir, bird life and nature walks and this unusual snake gate. 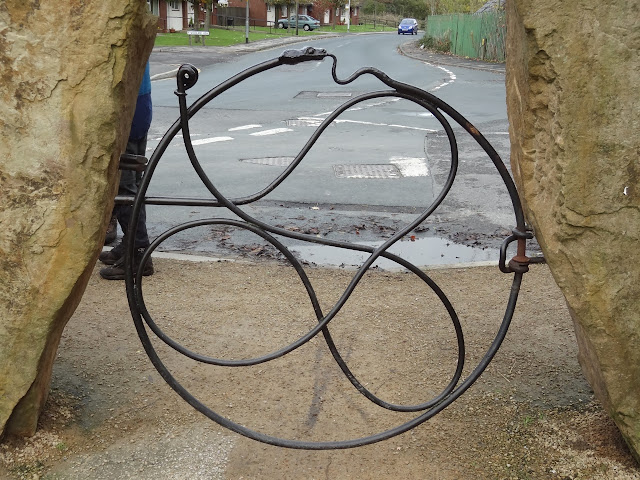 After a good 20 minute stop we had the last leg of our day trip to do which was to Abbey village. Again this was mainly walked on the old railway line which was opened by the Lancashire and Yorkshire railway co. but it was closed down in 1960. There’s not much left to see at Brinscall of the old station except a stone wall but there is more to see at Withnell which we passed through next. 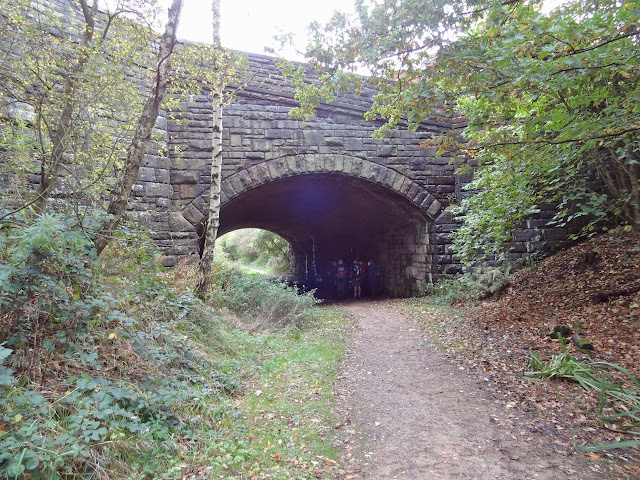 The railway bridge at Withnell 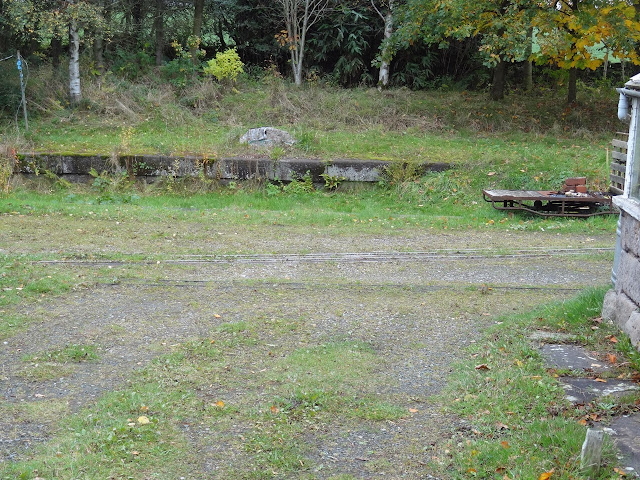 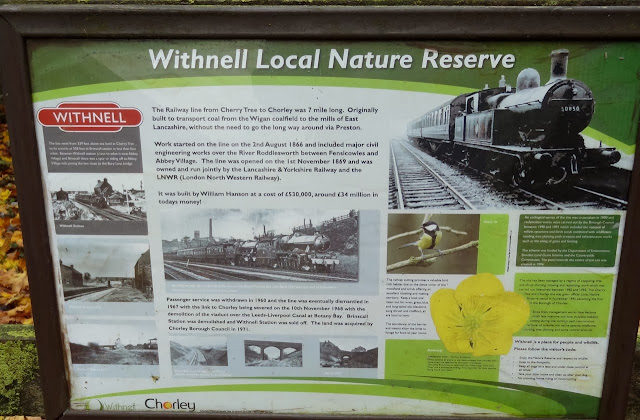 Info board at Withnell
This became the last bit of railway before we joined the mud fest. Our route into Abbey village and our bus back into Chorley was a bit of a trying affair. We tried to avoid the mud but it was useless.
Even the tractor was caked. 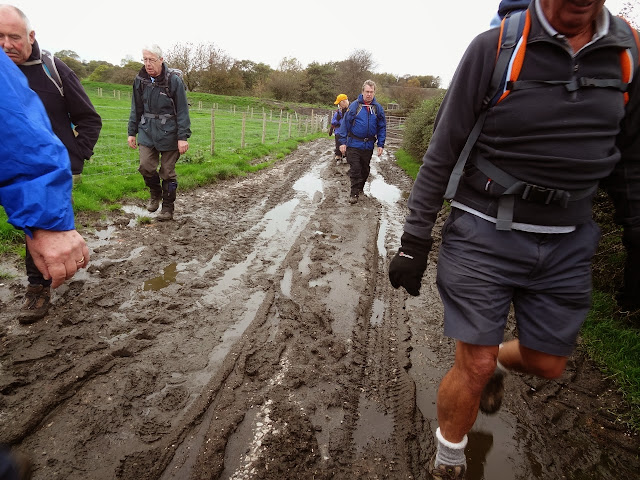 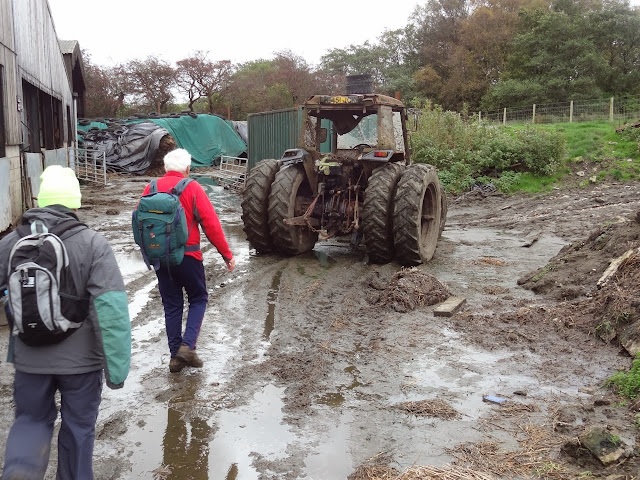 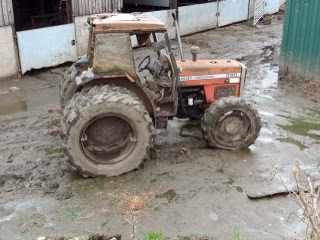 Somewhere in the morass we missed the path which led through the farm. We ended up doing almost a full circle of a nearby field before some of us climbed a fence into a back alleyway whilst others walked further to more or less end up where they started. We soon joined forces and made our way along the main road to the bus stop where within 10 minutes we where heading into Chorley. 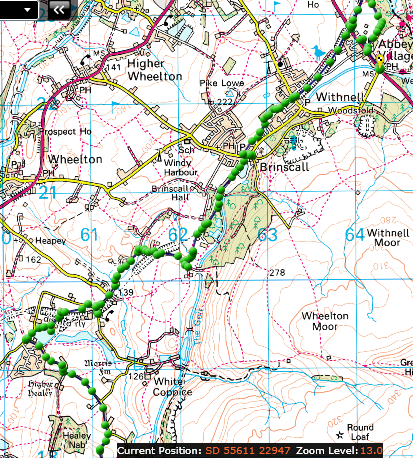 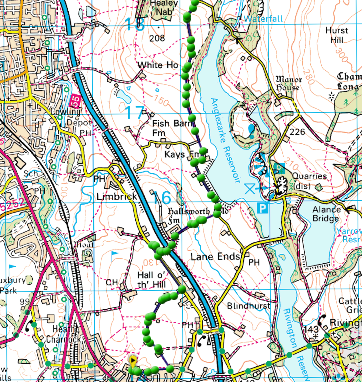 Still not got Satmap sorted out. I think it was 11 miles. Thanks for the invite.

Lovely autumnal colours Alan.It may seem odd but I have driven a David Brown, also a Fordson Major, a Dexta (?),a Massey Ferguson and an original grey Ferguson.

Thanks Dawn. Its a lovely time of year. Yes I remember you telling me the tale of the old fergy brakes. The Dexta is also a Fordson and very similar to the fergy 35. I have not seen too many of them around lately.

Thanks VM Gibson.
Since I updated my Apple osx to Mountain Lion, Satmap won't upload .gpx files to satmap xplorer. They/we have tried everything to resolve it but without success. They say they are having to go back to the software developers but it may take months to resolve. Guinea pig comes to mind.

That's not much good. When they resolve this will it work with Mavericks I wonder. I've got a vested interest in this because my next laptop is likely to be an Apple.

Hi Gibson,
Don’t hold your breath. I did a post on the problem here.
http://alanrayneroutdoors.blogspot.co.uk/2013/10/satmap-active-10-and-osx-mountain-lion.html
Good on you getting a proper laptop.