Being in post operation state and having caught an infection which was far more worrying than the actual operation, has given me lots of time to do nothing.
The Penicillin started to work on the infection in about 36 hours and improvement has been gradually improving. The biggest problem i have had is boredom.

I've read lots of your blogs old and new and come up with a number of ideas to try out in the future.
As readers will have gathered, i am not averse to making my own gear so when i read Gordon Green's post on his favourite Evernew DX stove it raised my spirits to find out more.

I knew i had enough materials in the shed to have a go at making a copy of the stove but i didn't know measurements and it would be made from aluminum and not titanium. Gordon kindly provided me with burn height and from a number of web sources including Evernew's own page i managed to put together a decent copy which i christened the ADX stove.

Having made it, which is pretty easy, i can see exactly why Gordon likes it. It's a neat design, the upper body fits inside the lower body and the stove fits inside too. Then all together it fits inside your pot and there's not much can go wrong with it.

So i came to try it out and was full of hope that it would prove to be better than my 12 - 10 stove with a cone windshield. Its always nice to make something yourself which proves to be at least as good as the shop bought.

Sadly it wasn't to be, i tried it with my trangi burner, my cat can and my 12-10 , all with and without a trivet. I used Evernew 600ml pan. The problem as far as i can tell is the loss of heat through the top slots of the upper windshield.
I found that it took approximately 30% more fuel and about the same 30% more time to boil 400ml of water than my 12-10 and cone windshield. 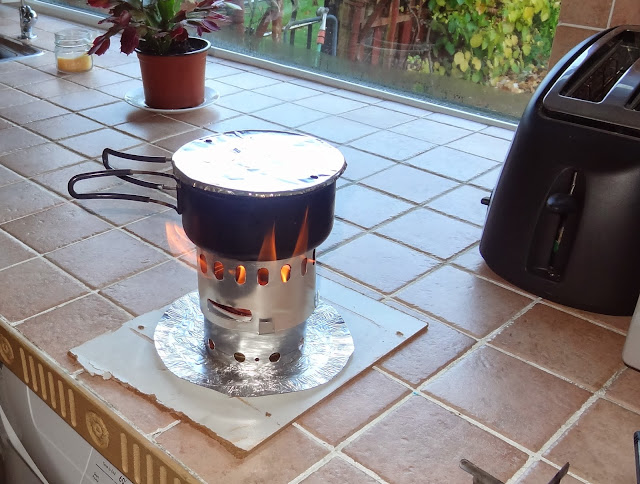 My attempt at a DX stove, so much heat loss through the top slots, with or without a trivet.

I tried putting a secondary shield around the pan but it didn't have a positive effect, it just burned less efficient and generated more soot.
I was quite sad really after my effort to make the stove. I was hoping for better things. I suppose that if my backpacking trip was short or fuel readily available then i would use my version of the stove but i wouldn't take it on longer trips where you need to be as frugal as possible with fuel.

In the same vein as Gordon's post got my attention then so did Robin's post about Bio Gel alternative fuel.
I became aware of Bio Gel fuels a little over a year ago when my local garden centre put on a demonstration of alternative house fires. They used bio gel and the brochure was highlighting things like, less soot, less smell, eco friendly etc.
I thought then about getting some and trying it in the trangia. However at the time i couldn't buy it in small quantities. I think it was something like 12L was the minimum purchase.
I checked the internet and this seemed to confirm the volume was not available in 500ml purchases or pouches as in Robin's post. I didn't pursue it any further but just kept the idea in the back of my mind. Then Robin rekindled that train of thought.

Lo and behold bio ethanol was now available in small quantities and i went for the liquid rather than the gel. I got it from Gardeco via Amazon. Price was reasonable at £2.49 for 500ml. 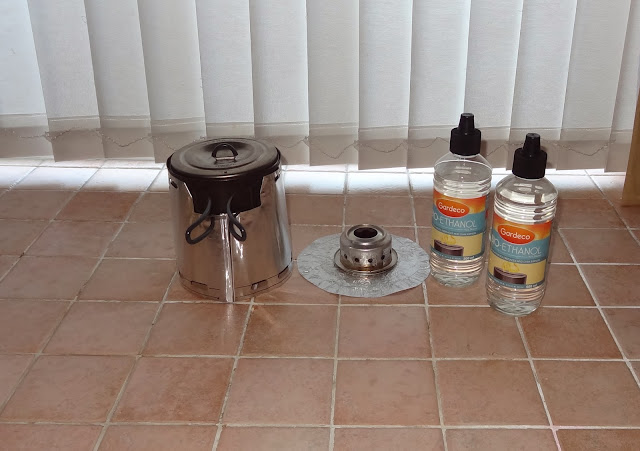 I have done just a quick test comparison with methylated spirits and the first impressions are good. They both boiled 400ml of tap water in about 5.5 minutes. But this was done in my kitchen and so i need to try it in the field to get more realistic results but for now i would say it has potential.

One thing i did notice though, was it still had a smell when burning and it wasn't too dissimilar to meths. I have a thought that it might require a little more oxygen, so i will make a second cone with more slots in. I don't want to corrupt my current cone as it works well with meths and the 12-10.

All good fun and reduces my boredom at having to stay indoors.
Posted by AlanR at 10:53 AM

Hope the recovery speeds up and you can get out in the field to do some proper testing. Great effort making the stove. Look forward to read how you get on with the bio ethanol

Thanks. I am fed up of looking at these 4 walls. The bio ethanol certainly seems to be a valued alternative to Methylated spirits. More testing to come.

Hope you are on the road to recovery Alan. A wonderful bit of tinkering, Love the idea of bio ethanol.

A wider pot should catch more of the heat when using the ADX and improve efficiency. Of course, if you don't use a wider pot in the field...
Glad you are using your recovery time wisely !

Hi Dawn,
I'm getting there, thanks. Just a bit uncomfortable now. Yes the bio ethanol surprised me how cheap it was.

You may be right about the wider pot but the heat is still escaping to atmosphere so I don't think it will be as good as a cone set up.

Hi Alan. Sorry to hear about the infection and hope that you're back on your feet again soon.

Hello, this is not related to your post about stoves but i've read on your blog and on other's comments pages that you say you cannot wear out salomon XA pro shoes. I wonder how many miles you've walked in them? I do like the shoes but a mixture of mountain paths, grass and very little tarmac (approach to/from mountain paths and hills only) the soles are worn out in less than 500 miles. I also note that the mesh wears through where the lace crosses it.

Thanks Gibson, I hope you are doing well too.

Anonymous, My Salomons are the 1st release (i think). My running has been on roads and land rover type terrains. Both Sheila and i have a pair. We have had them around 7 years. We have only run on fells a few times but have used them regularly in the gym. Just a conservative guess we would say we have done 3 times more miles than yours. I will do a post on them to show you a photograph.

Sorry to hear about the infection - but luckily the penicillin usually does the trick.

Stoves are just fascinating! Do they sell pure methanol in the UK to burn in stoves, or is it always ethanol based stuff? In Finland they sell ethanol based products, of course denaturated so to make them non-drinkable... And as far as I've understood it correctly it is the denaturating stuff that is to blame for the most of the soot (pure ethanol would burn more cleanly - as would pure methanol as well, but it is not as easy to find).

Hi Maria. I have finished my course of anti-biotics and fingers crossed i seem ok. Still painful from the operation though. Denatured alcohol is widely available but ethanol and pure methanol is not easy to come by. You can buy it on the internet but its quite expensive and available volumes are a bit on the high side for just camping. It's more for laboratory use.
The cone works great considering its home made. I made it from tooling aluminum which is easy to get hold of. I am going to make another one from slightly thicker aluminum sheet to improve the longevity.
I also have a good shield for the F1 lite gas stove too.

That will be interesting. I have a pair of Adidas kanadia trail shoes which still have a few mm's of tread on the sole after over 800 miles of general everyday walking on mostly hard surfaces. The salomon are too expensive for me to last only 500 miles.

I agree. That's the problem with Inov-8 too. IMO.