Wednesday 16th July.
We knew that the start of the day would be a slow one bit we didn't realise just how slow. True, it was only 9 miles and no contours so a short day was in prospect.
We had been informed the previous evening that Mike, JJ and Dawn would be visiting Rosie’s  cafe for a full breakfast at 8.30am. So as 11.00am approached and still no sign of them, I decided to "phone a friend". "We are just on our way" was the reply and so with that news we 3 on the south side of the estuary got the kettle out for a brew.
Another cafe worth a mention is a well know spot and its real name is the Carousal cafe but the C keeps getting stolen and now it doesn't get replaced. So it’s the arousal cafe.

Eventually the team was together and we got on our way along the trail.
The trail follows the route of the old railway line on the south side of the stunning Mawddach estuary.
The line was closed in 1964 due to flooding but was scheduled to close in ‘65 although it was very popular with visitors. Opened in 1869 by Great Western Railways. 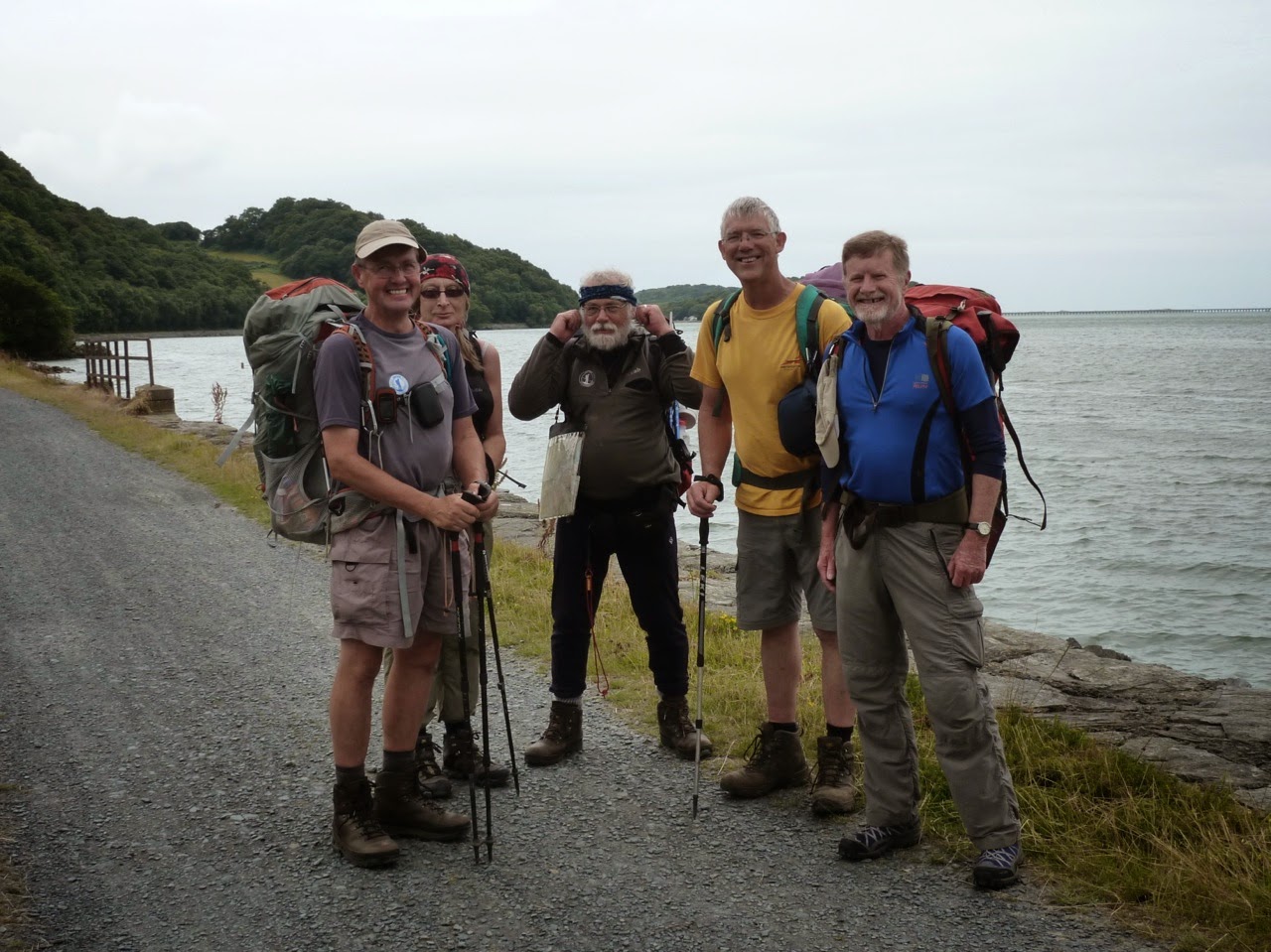 JJ, Dawn, Mike, Rich and Teg.
Now walkers enjoy the superb mountain vistas and much bird life along the way.
Unfortunately for us the weather today was the opposite of yesterday. We now had low cloud and plenty of rain showers. The tops not visible.
During a dry spell we took advantage of a well positioned picnic bench for lunch. Great views both up and down the estuary, that was until Mike spotted that the western end of the estuary was disappearing rapidly into a grey murk. Heavy rain approaching. 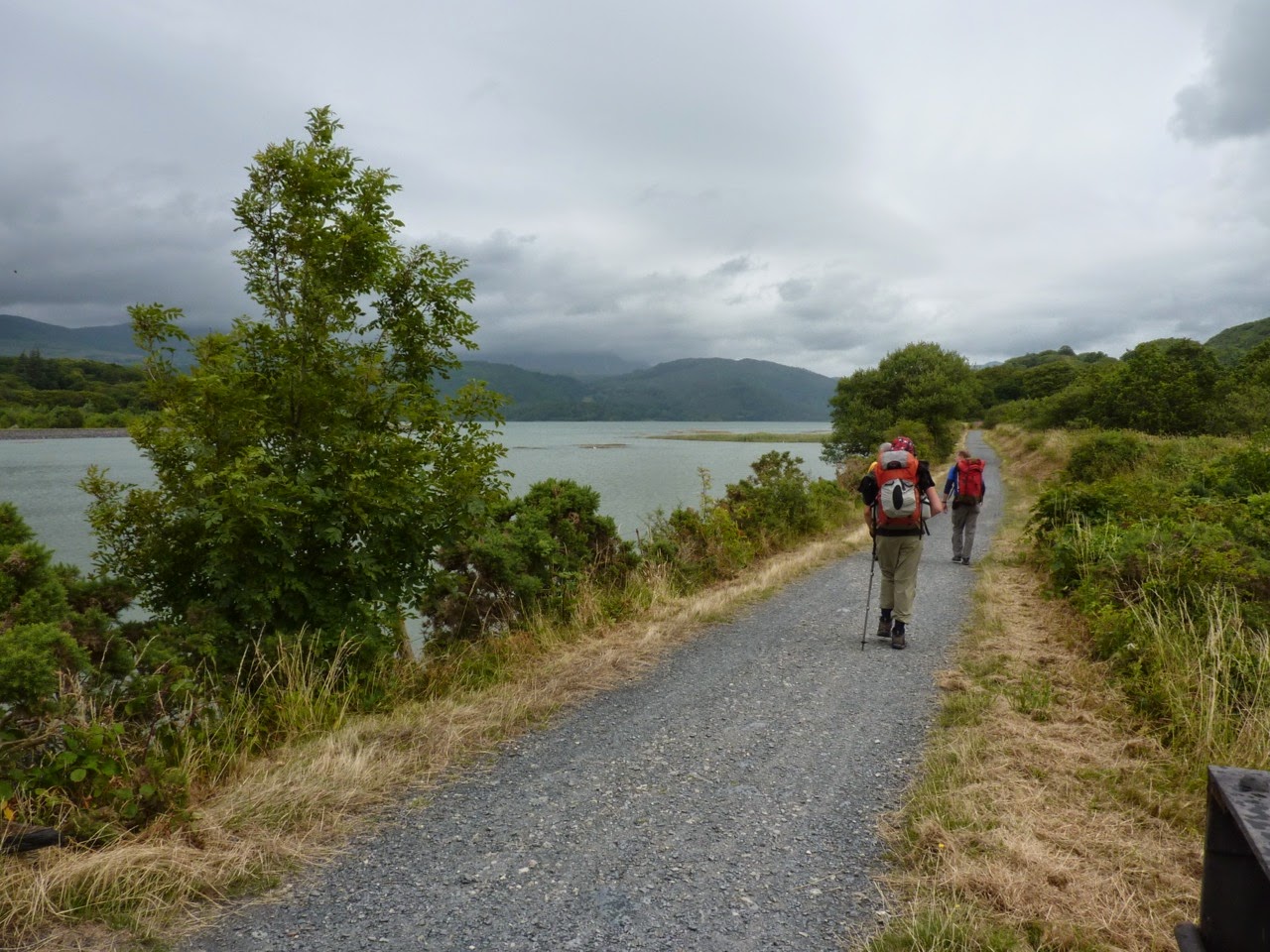 The Mawddach trail
It was good to see Dawn again and chat about new gear and recent walks. It was also good to hear Mike is getting a new dog. Plenty of chatting about this, that and the other made for quick progress along the easy walkway.
As we passed the George III pub it was raining quite heavily and so had to go in and sample the beer.  Just the one you understand. Its quite a nice place to sit out and watch life go past but a downstairs bar would be handy.
Lots of railway items surround the pub with signals, the old station buildings and the signal box. 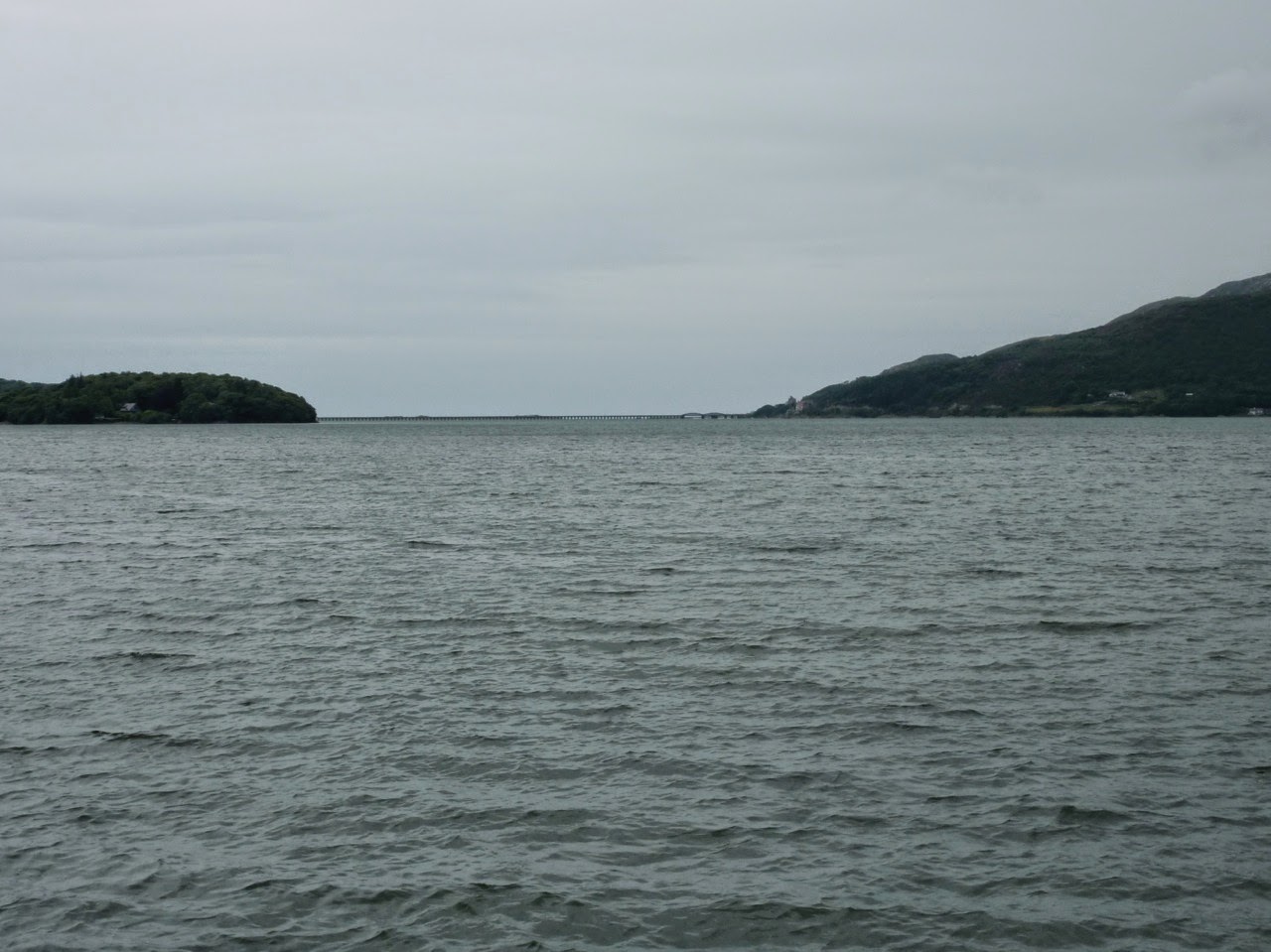 Looking west to Barmouth and the bridge. 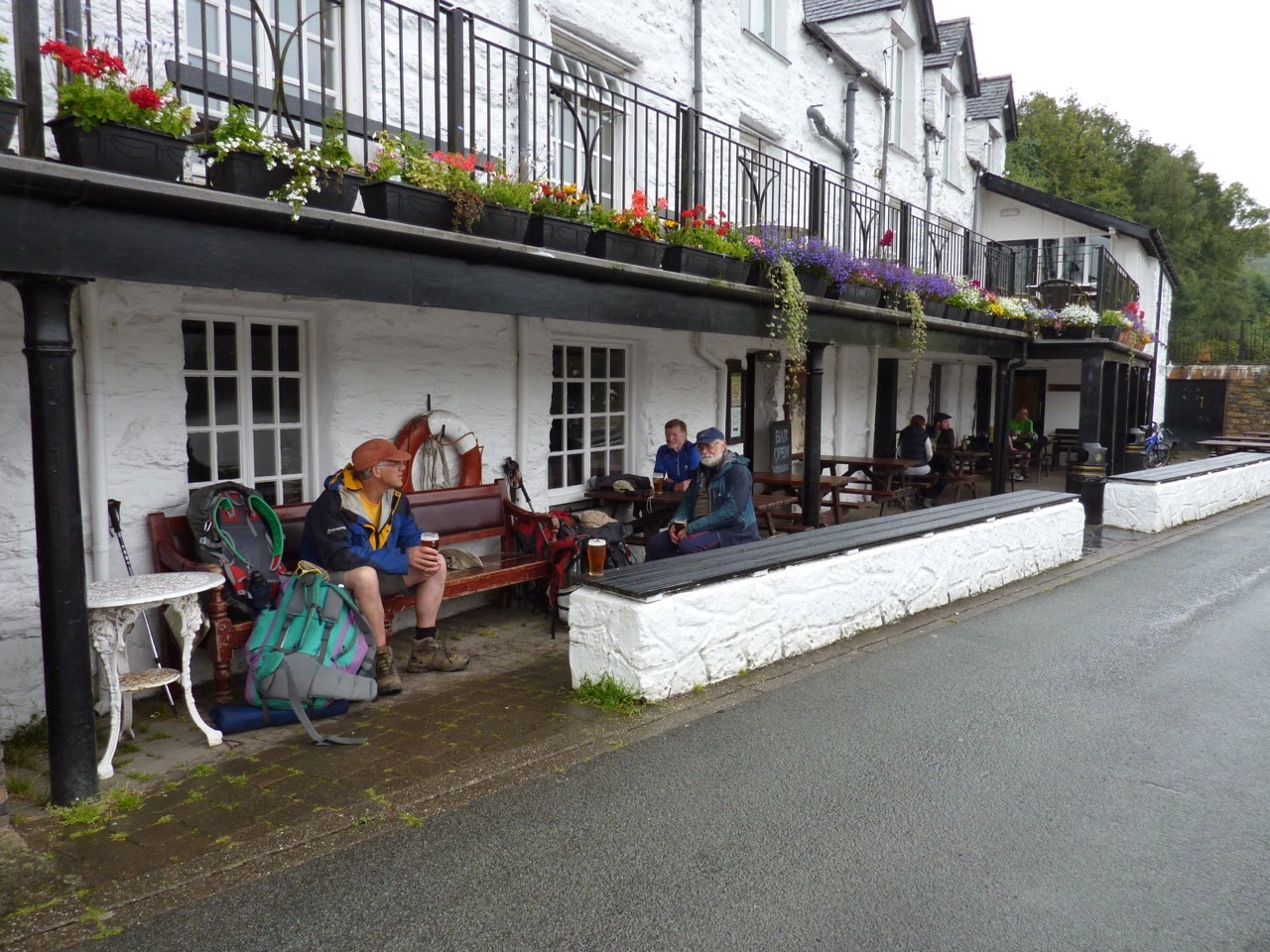 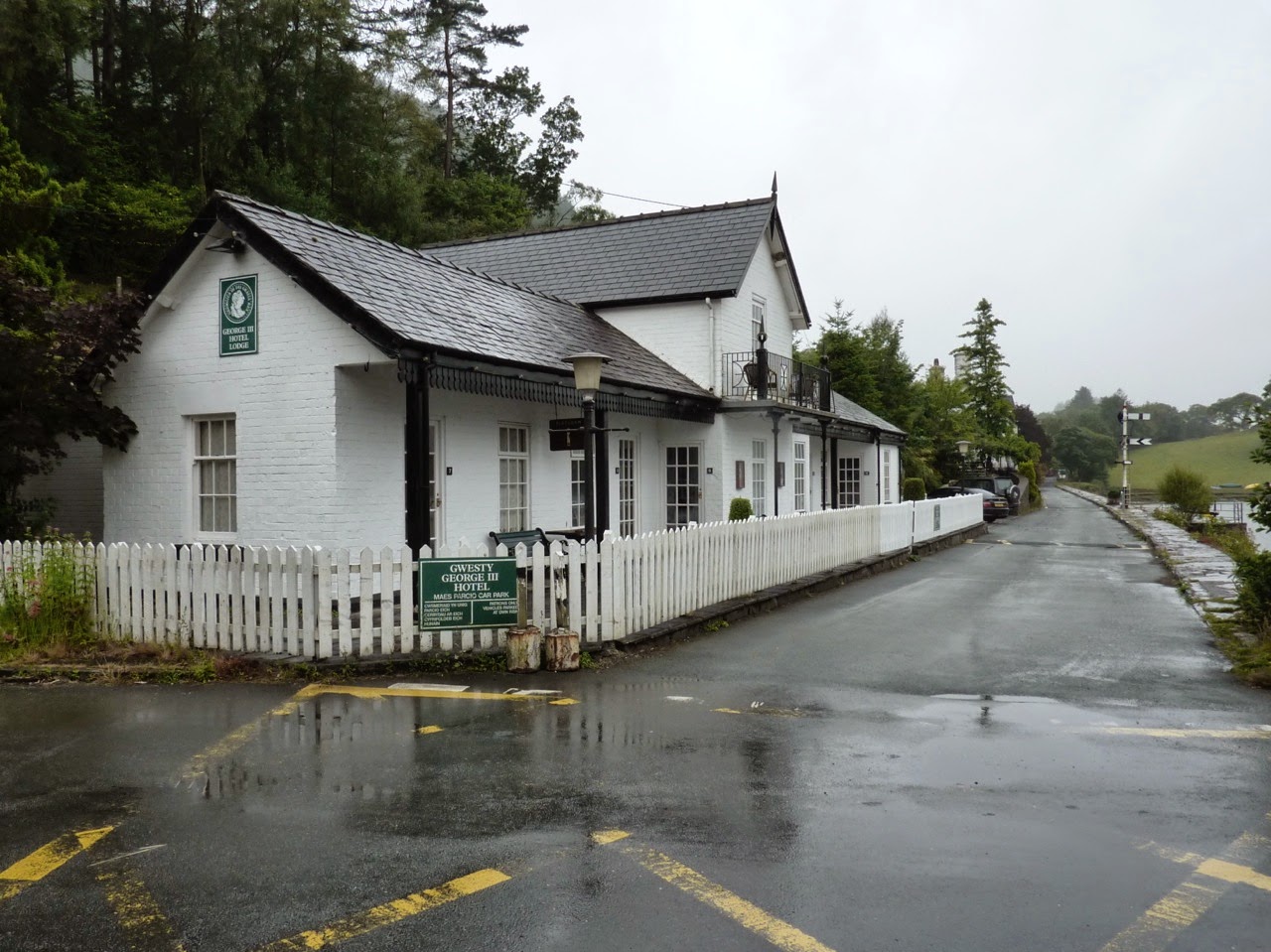 Old Station Building and signal
The rain eased as we approached Dolgellau which we found to be quite busy. Its a nice place, quaint in some ways with narrow streets and old buildings.
Our destination was Tan-y-fron campsite, easily found just on the outskirts whereas the Co-oP was a bit harder to find. Its a very nice camp site and much good work has been done to give campers a flat pitch with good views. There was a Case excavator parked up and upon inspection i found it had been made in Manchester and i wouldn’t be surprised to find my finger prints on it somewhere. 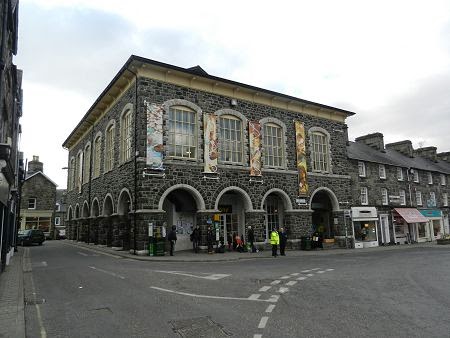 Dolgellau
Two other bloggers were expected to arrive here in the evening. Judith and Laura. Upon arrival Judith was asked if she was with "The Rabble"! Rabble indeed.
The Torrent Walk Hotel was our watering hole for the evening. More of a pub than a hotel, its a grade 2 listed building. Its a bit old fashioned but I quite like that, with a friendly bar and a couple of cask beers.
A Dutch couple who pitched behind the Rabble were being entertained by Mike. What they understood of Mikes tale of walking across Ireland in a Durham Irish accent remains to be seen. I'm sure they didn't understand much because we didn't either.
Still we all had a good day and some sharing whisky.

it was good to catch up and have a wee chat Alan.

It was Dawn. Looking forward to your review on the new tent.