Once a year Sheila and I meet up with friends for a weekend of hiking and socialising. Recently our accommodation has been a nice house in Caethro just outside Caernarfon. It’s in a quiet spot with good views and also only a 10 minute walk to the pub.

I picked Sheila up from work on Friday lunchtime and i felt a bit unwell. Just shaky, warm and a bit nauseous. I thought it would pass having taken some tablets for upset stomach but it didn’t pass. To make matters worse it rained and was misty on the journey.
Arriving at Caethro i just about hung on to go to the Loo without embarrassment. But i felt no better.

Everyone arrived and we all settled in with a meal, few beers and glasses of wine and then it was decided that tomorrow we would drive over to Ogwen Cottage and do the Glyders starting with the ascent of Y Garn.
It’s a route i have done before but it is a worthy and picturesque route. The weather forecast was checked and it all seemed very promising.
Time quickly disappeared and bed time called.

In the morning i was still feeling no better but decided that i could do the walk. I had an upset stomach not a broken leg was my way of appeasing Sheila, she was a bit concerned.

Ogwen Cottage was a bit of a shock. This was our first visit since the new facilities had been built and what a grand job they have made. I remember the old green shed.

A beautiful day, and as you would gather there were lots of people and cars everywhere. 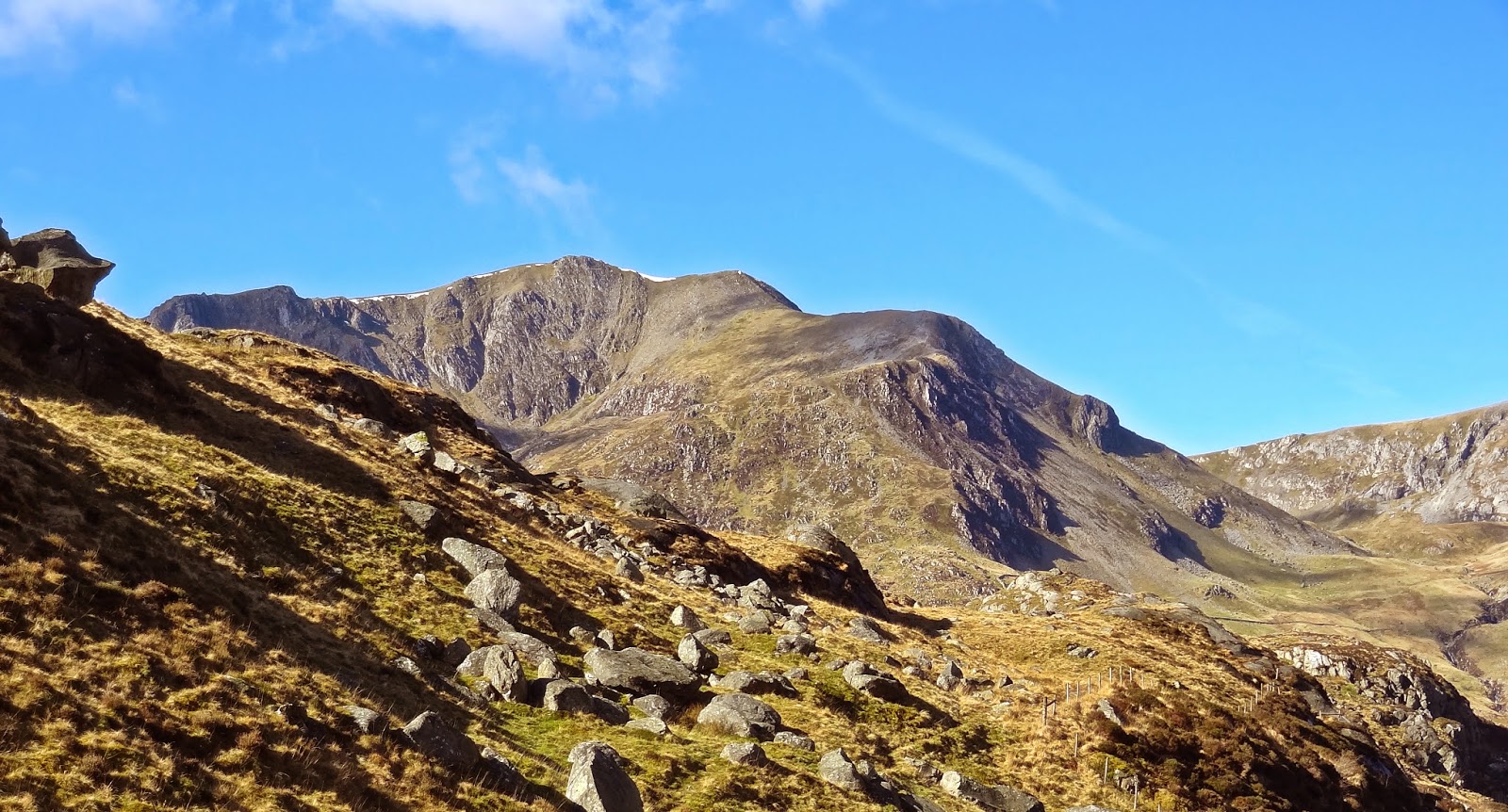 Y Garn
Unfortunately there isn’t much to tell from my point of view. We set off up the steep face of Y Garn and as soon as i put in any effort the shaking became worse and i was burning up. Sheila kept telling me to stop and go back but i soldiered on until we made the first ridge of the Pinnacles and then when i sat down i knew that was it. Complete loss of energy.

Once i had had a chat with the others it was decided that i would go back. What a pain in the bum it was such a fantastic walking day.
Sheila and i got down and sat by the Llyn for about 1/2 hr and then drove back to Caethro where i spent the afternoon laid up in bed.

I have no idea what caused it and still don’t. To make matters even worse, the village pub has closed down The Bryn Gwna Inn.

So here are the pictures i took of the brief walk and a couple of Llyn Padarn later.

Commiserations Alan, hope you are on the mend soon.

What bad luck - fingers crossed that you've shaken it off now.

Cheers John,Dawn. Better but not 100%. Done 23k this week but on the flat. Must have picked up a virus. A few Holt’s will sort it.

You can pick up a bug standing next to the wrong person in a supermarket queue; or pretty much anywhere for that matter. It's all pretty random and I doubt there's much you could have done to predict or avoid it. That said, this winter just ending does seem to have seen a particularly high number of people laid low with one set of symptoms or another.

Oh, nearly forgot the most important bit - get well soon!

Misery Eck!
Well done for trying, Al - but what a bummer!
Gorgeous photos though.
Get well mate.
:-)

Thanks Al. I am pretty much over it although the next incline might tell me different. It was one of those perfect walking days and a photographers dream.
There was a photographic club enjoying the day at the llyn, their gear bags bigger than my challenge rucksack.

What a shame. All the best for a speedy recovery Alan.

It happens. Annoying, but you did 23k the other day so you're on the mend we hope. All the best.

It certainly was. Thank you.

That's a bit of a bummer, Alan. Hope you are running like a retired greyhound again soon...
M

Being able to run like a retired greyhound would be a bonus.

Retired greyhounds don't run very fast, if at all, I suspect - at least - that was my thought process when I made the comment. Anyway, have a good week in the rain and the wind... !

Sounds like me then. Which sunny climbs are you off to now.