If only i had a kite. 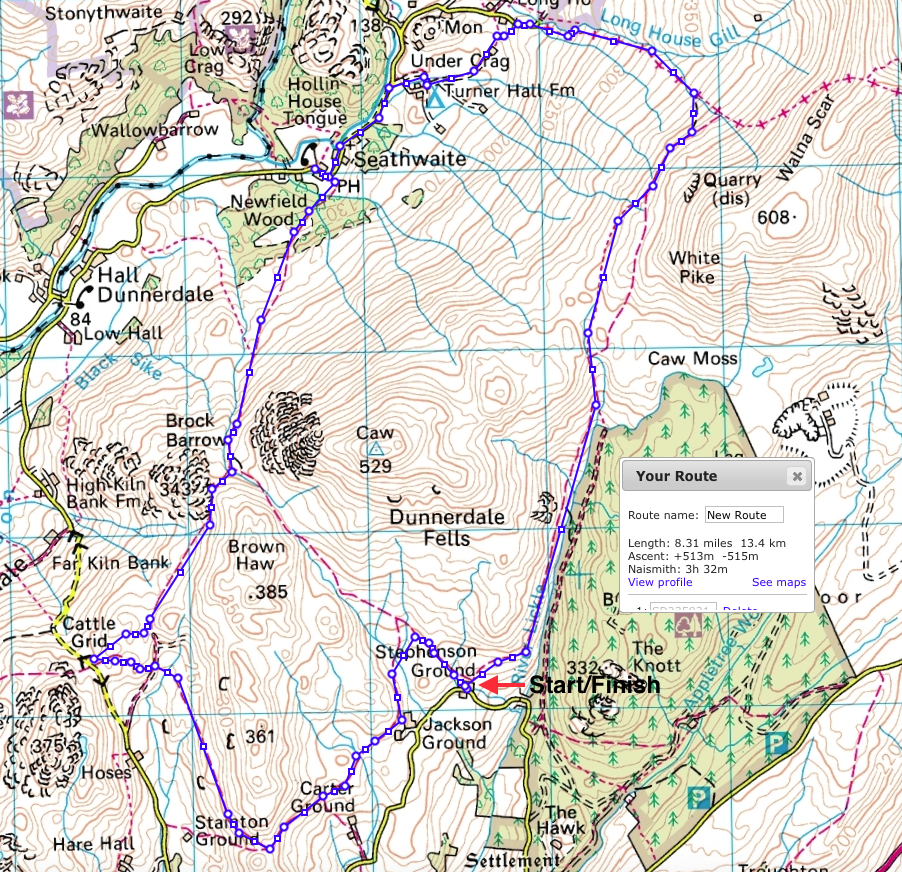 We had been looking forward to the good weather that had been forecast over the last few days however not everyone lives in London and our weather was not good. It was low cloud and very high wind 40 - 60 mph on the tops. Temperature was ok at around 8 degrees C, but the wind chill made it feel much lower, it wasn’t raining which i suppose could be called good weather for the Lake District.

Due to the wind speed the route was being changed minute by minute. Decisions being made on the fly about what we thought would be a reasonable outing.

The start point was easy, it was going to be Stephenson’s Ground. Adjacent to the farm buildings. The initial plan was to do Caw and White Pike but like i said, this was quickly changed when we got our first taste of the wind and saw how low the cloud base was. The cloud base wasn’t the problem it was the wind. 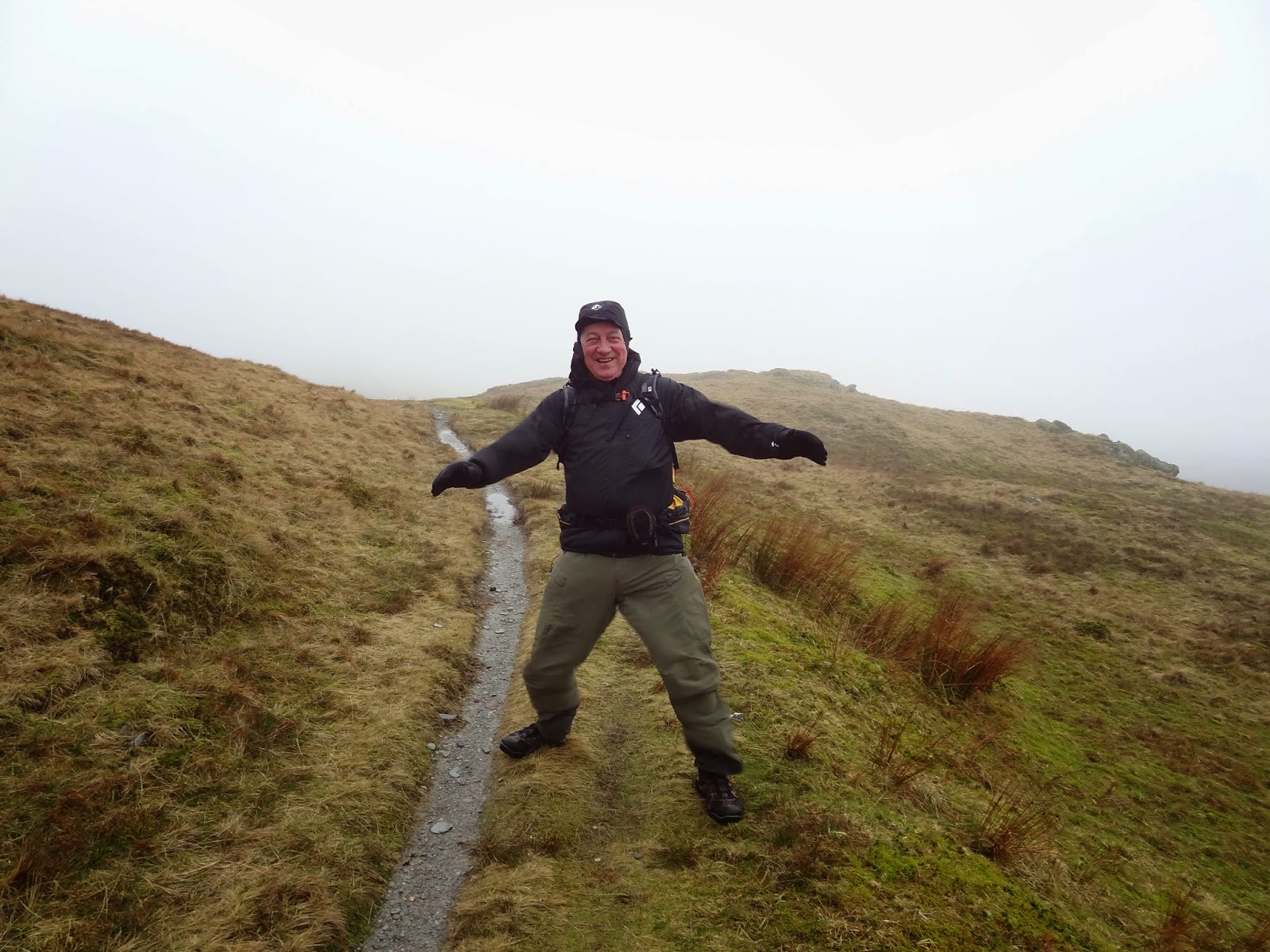 It is a fine area to walk in and lots of exploring can be done to find the ancient ring cairns and cists that are quite abundant if you know what to look for. A Bronze age axe was found a few years ago at Stephenson’s Ground.

Our route first headed North East following the River Lickle. The track is again an ancient one and one of the routes that workers, carts and slate sledges used to ply from the quarries higher up.
Looking at the ground, worn rock can still be found showing where the carts or sledges passed. It is a nice way to walk to work as long as the weather is good. The River Lickle down below us to the right is a fine spectacle and in many places the wind was whipping the water back up the water course. Luckily we were being pushed up the hill. Good to see Natty bridge still in situ. 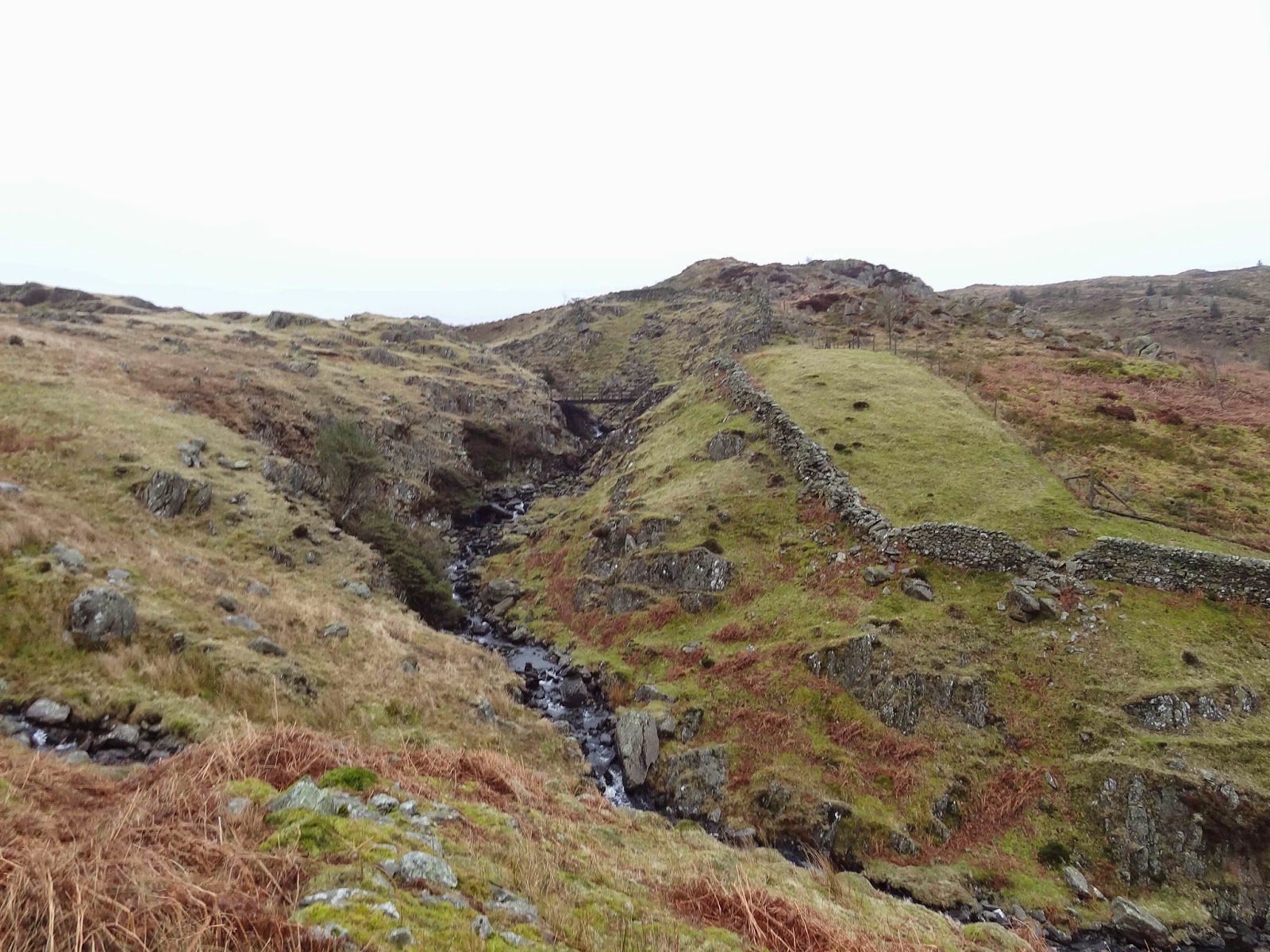 Natty Bridge on the River Lickle
Reaching the col below Dawson Pike we could occasionally glimpse Caw top but generally the cloud level was around 400 metres. At this point and with raised voices to overcome the howl of the wind the question was posed "Does anyone really want to go up Caw or White Pike”. It was a resounding no.

So we stayed on the path and skirted under White Pike and through the old Walna Scar Quarry. With the swirling mist the shadows of the ruined buildings was quite spooky as they suddenly apeared. At a gate in the old boundary wall we found the original path the miners would have used coming and going from the Duddon Valley. Today most hikers feet tread the official Walna Scar path. 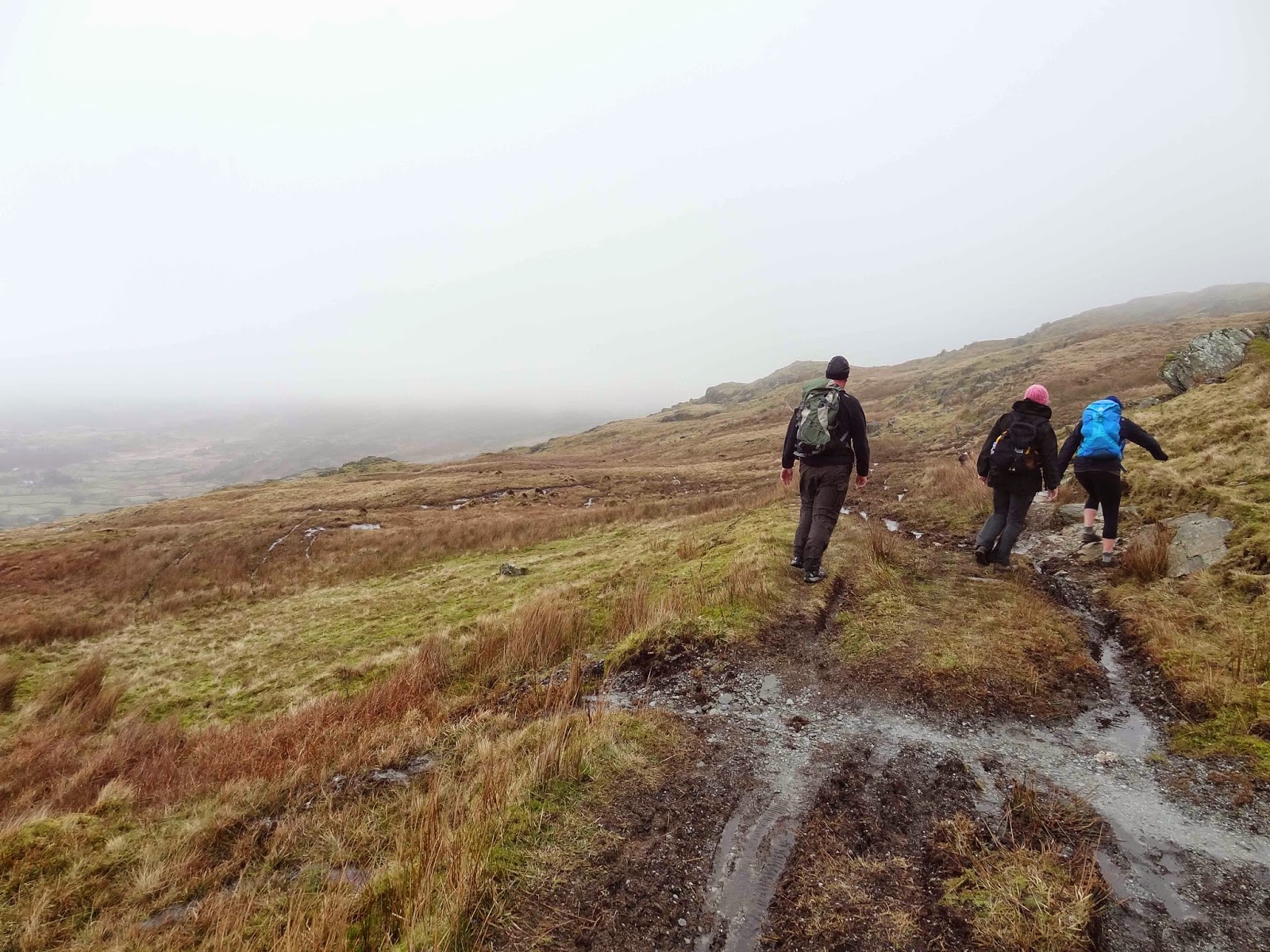 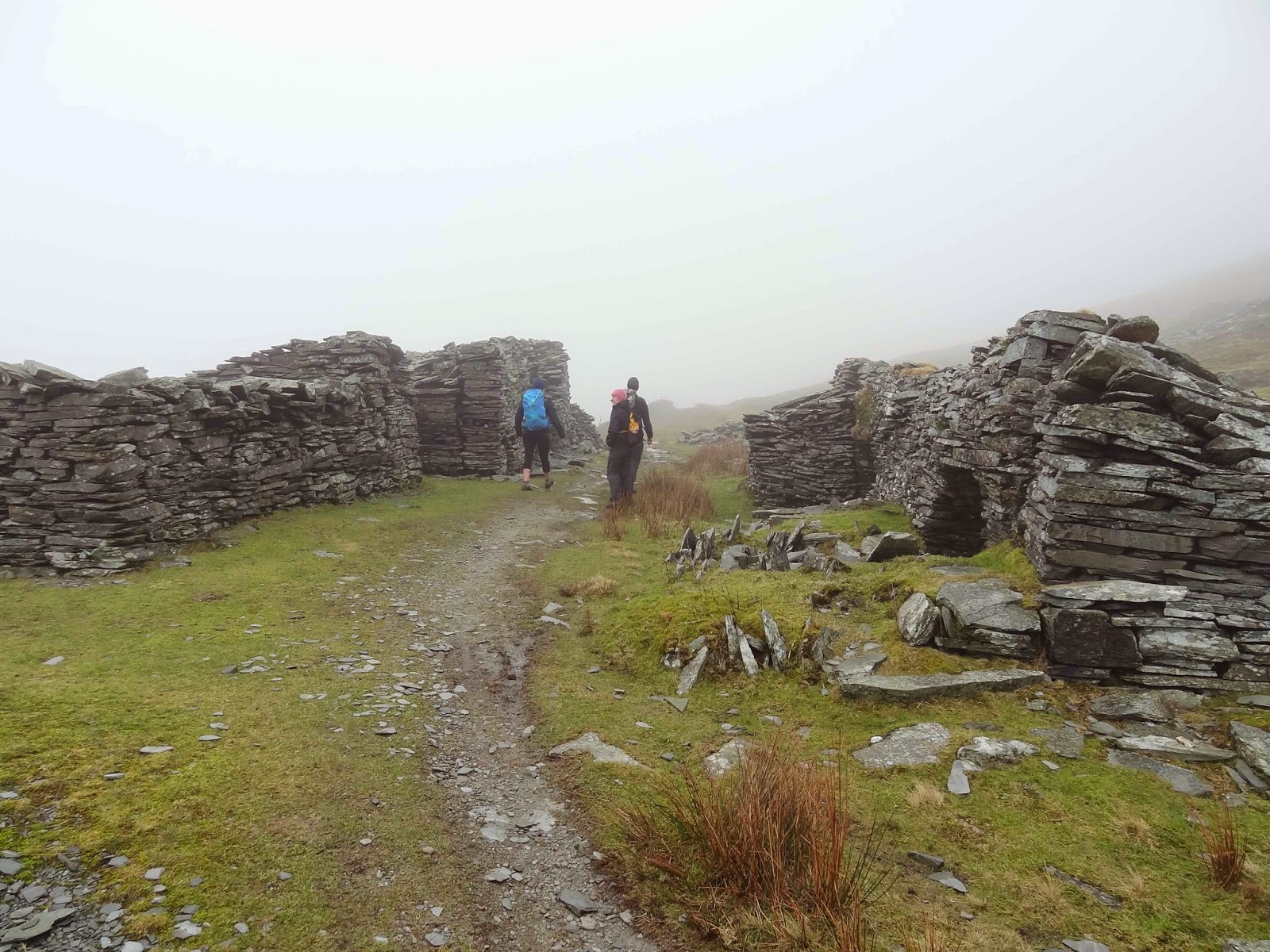 Remnants of Walna Quarry buildings
Many Herdwick sheep sheltered in the hollows as we passed. They didn't even bother to run off as they usually do. Almost down to the valley bottom we passed our first walkers of the day, heading up. Like us they were battling the wind and were all wrapped up.

We chose the path that leads to High Moss which meant that Bru the dog who had jumped over the 5ft high road gate had to jump it back again and then he had a 6ft ladder stile to get over. What an athlete. 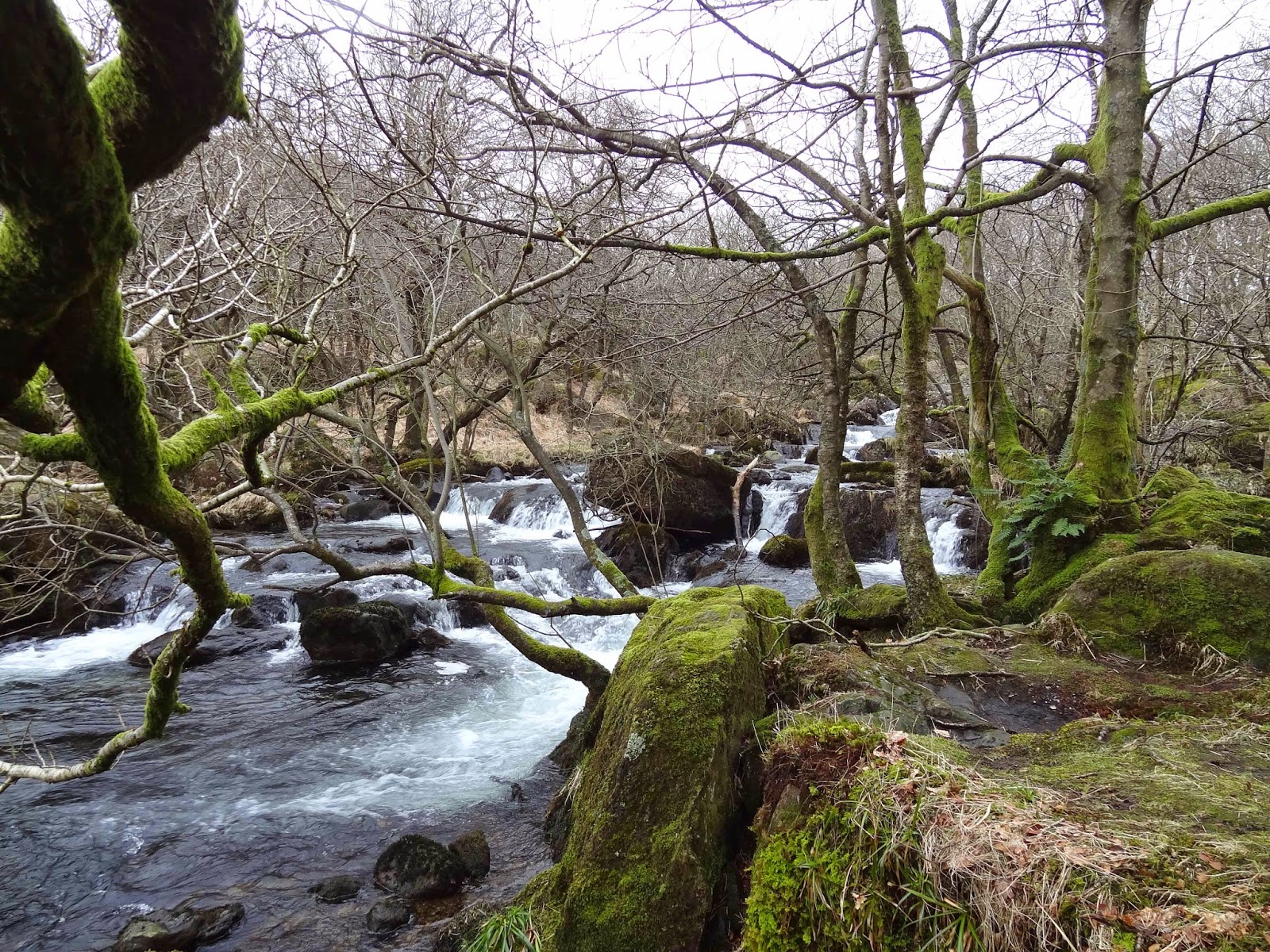 The dogs at Turner Hall Farm awoke as we passed and one dog in particular was keen to check Bru out. Bru wasn't interested and we had to see the farm dog off. The Newfield Inn at Seathwaite was visited for quality control purposes and we found to beer to be acceptable. With the warmth of the real fire on our bodies getting back outdoors came as a bit of a shock. It was freezing. 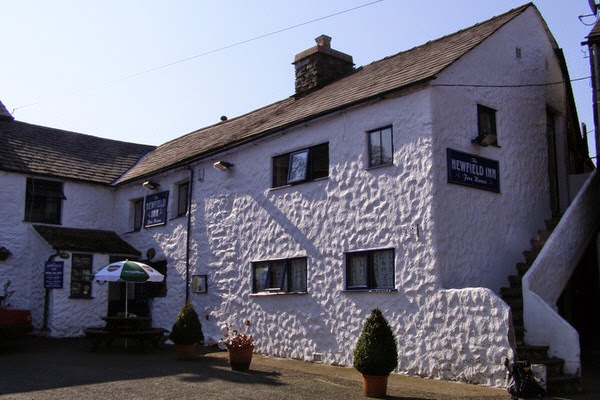 The Newfield Inn, Seathwaite Duddon Valley.
The wind, now in our faces was a battle. The Park Head track is a good wide rocky path and usually an easy way. Today with the wind it was hard work and I was getting a bit peckish. Reaching the top of the track we looked for a sheltered spot for lunch. We found one close to the road. It was a good spot but we still needed to put on insulation. 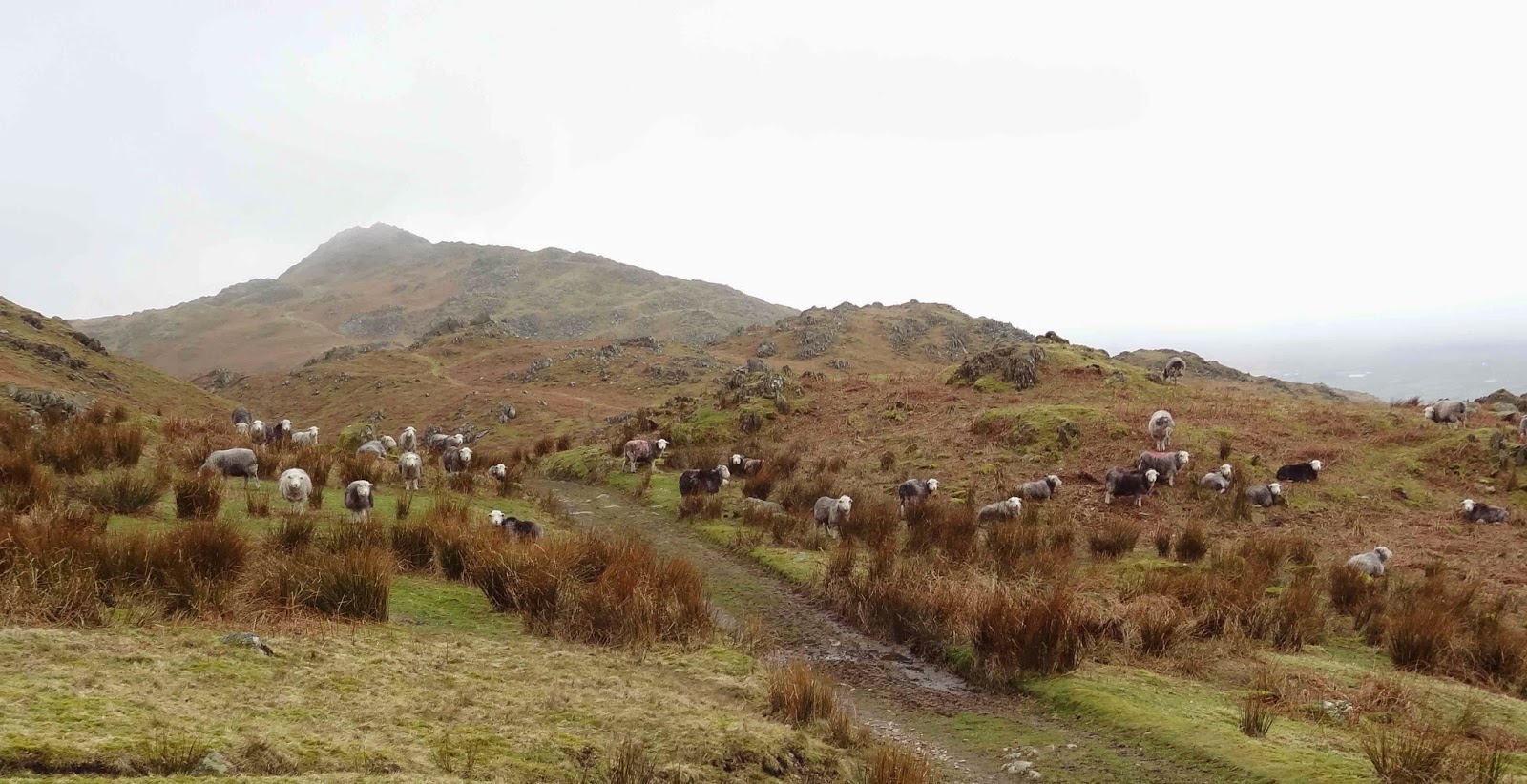 Lunch over, the track on the east side of Kiln Bank Cross was taken passing a large adit and many old slate heaps. The views down the valley towards Broughton Mills were superb and a real shame that Hoses Farm never got the camping ground up and running because its a great spot to pitch a tent.
The wind was fierce and more sheep huddled together as we skirted Stainton Ground heading now North East below Raven Crag. 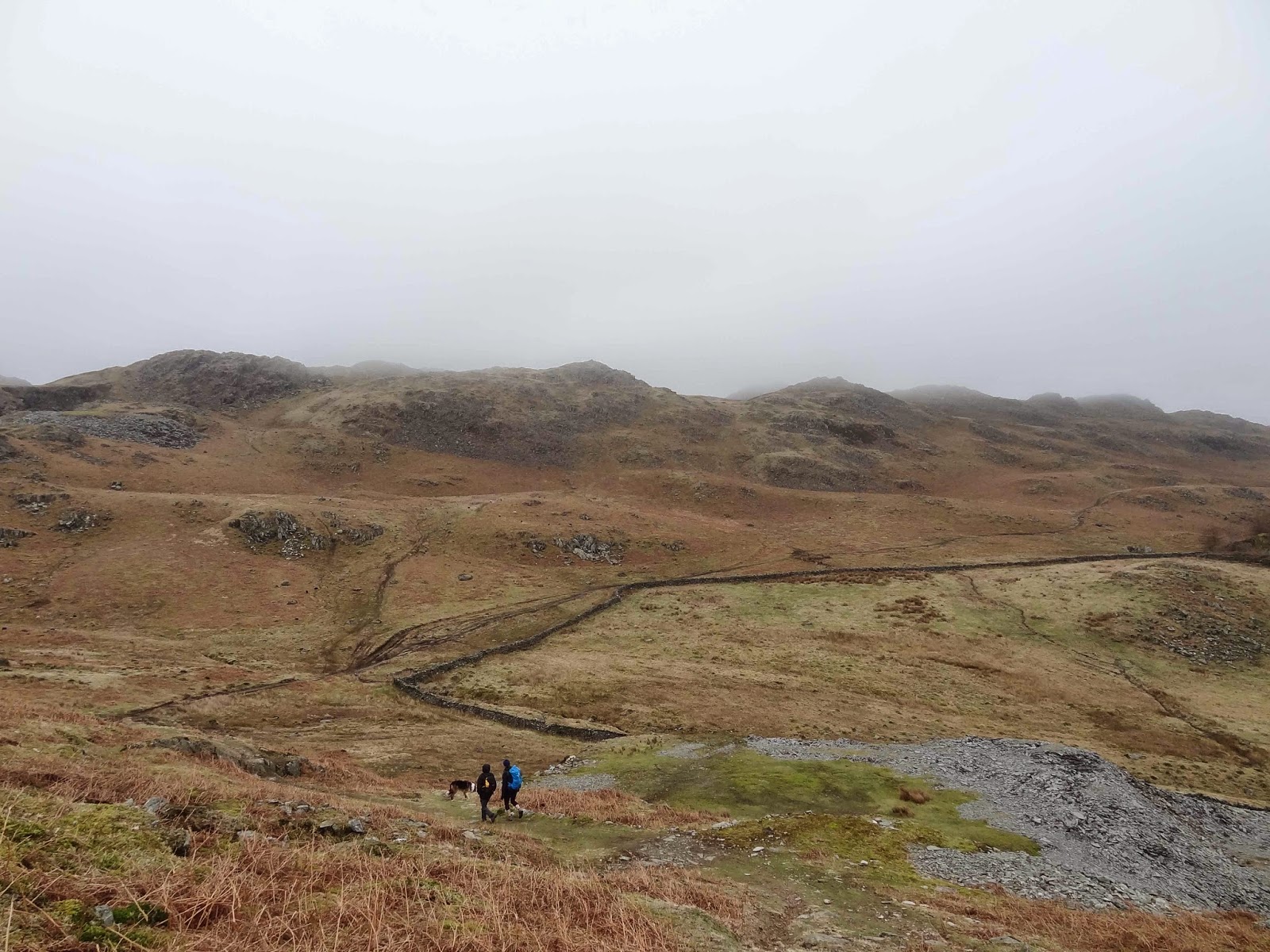 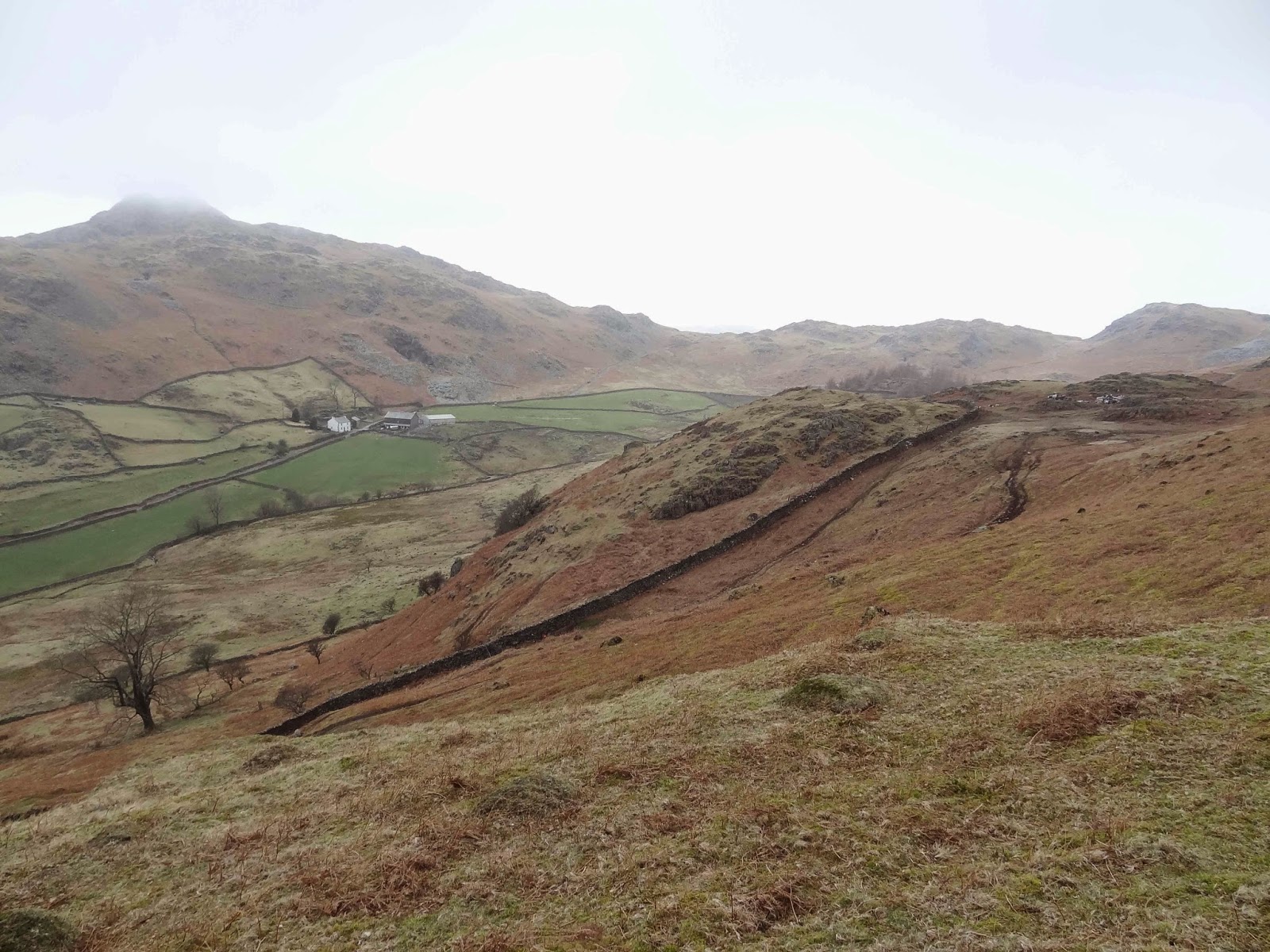 Stickle Pike with Hoses Farm below.
We crossed Carter Ground and then found a dead sheep right on Black Moss Beck. It couldn’t have been dead long. Just shows that filtering water is always the right way. 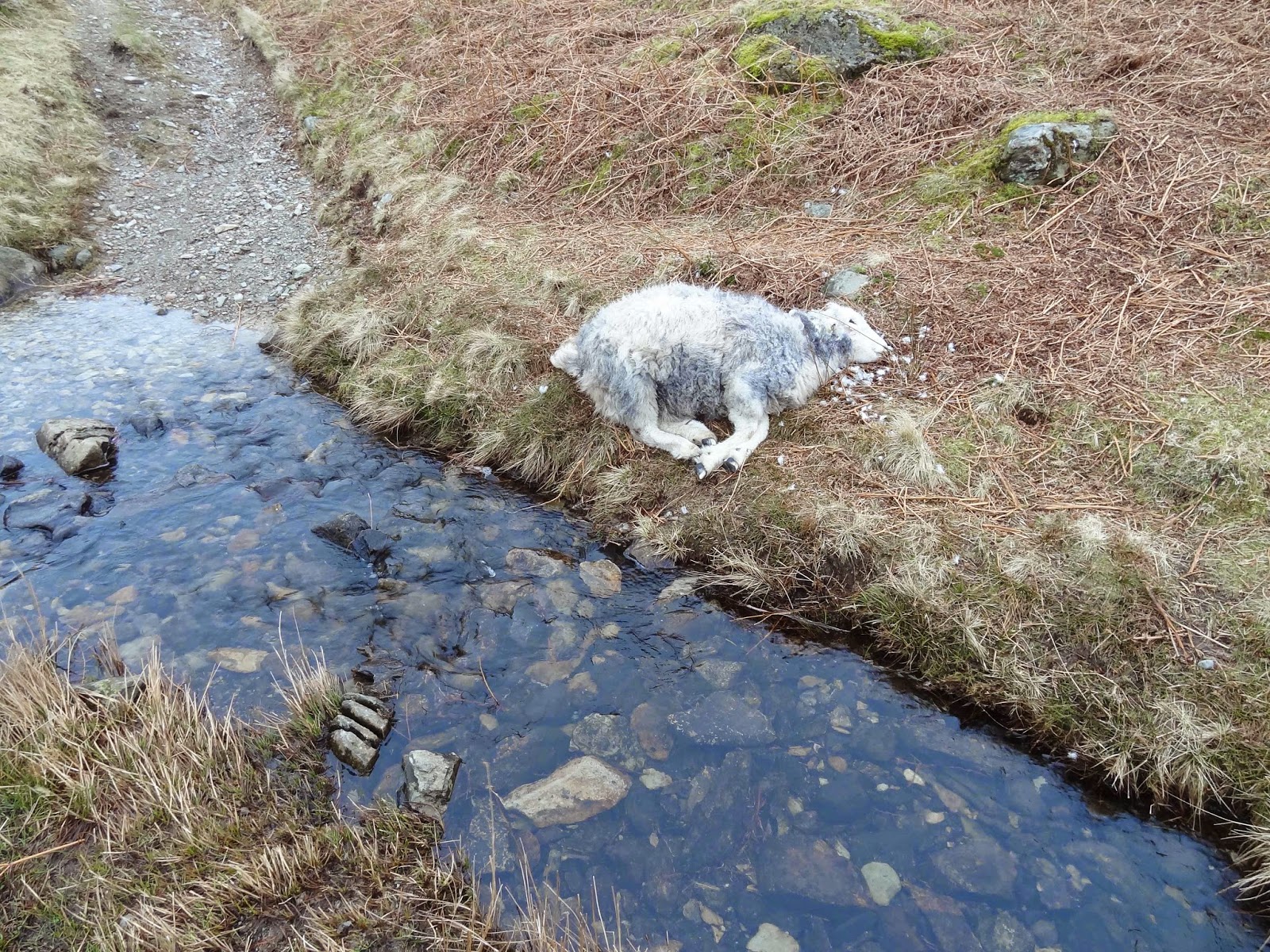 The wide expanse of Long Mire greeted us, another ancient thoroughfare. The mist was getting lower over the tops and Caw was nowhere to be seen, we knew it was there but well under cloud. Our track turned South East once we had crossed the marsh and bog that is Long Mire Beck where we followed a wall and an old green lane that brought us back to Stephensons Ground. 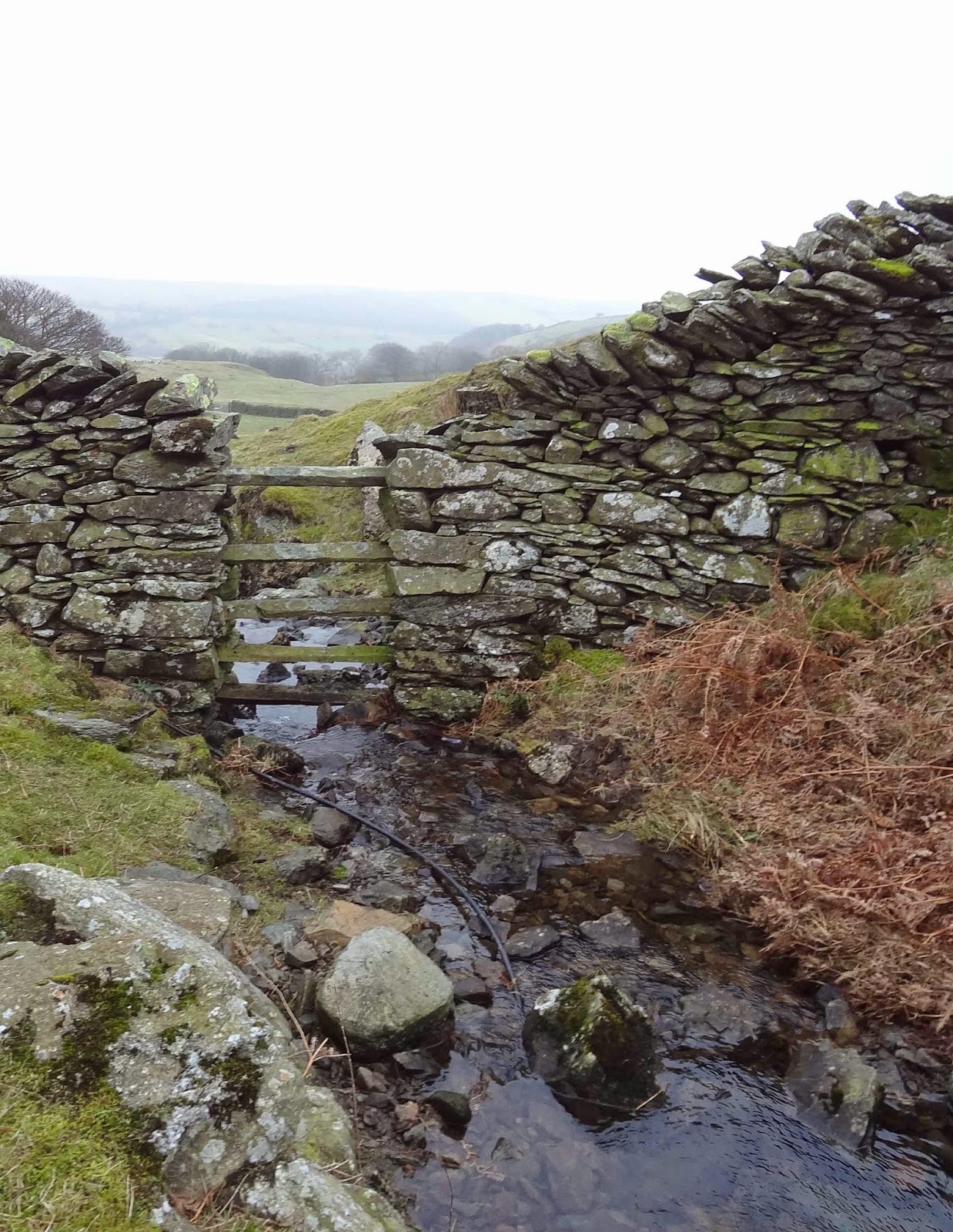 5 bar water yeat.
Considering that our walk was only 13.4km is was pretty hard work at times and we were glad to get back to the car. For our efforts we took another unanimous decision to visit the Blacksmiths Pub because we had to go passed it on the way back to Broughton In Furness and the Manor Inn.
The beer in the Blacksmiths was first class and although the Manor is Camera Pub for 2015 in Cumbria my 1st prize went to the Blacksmiths. 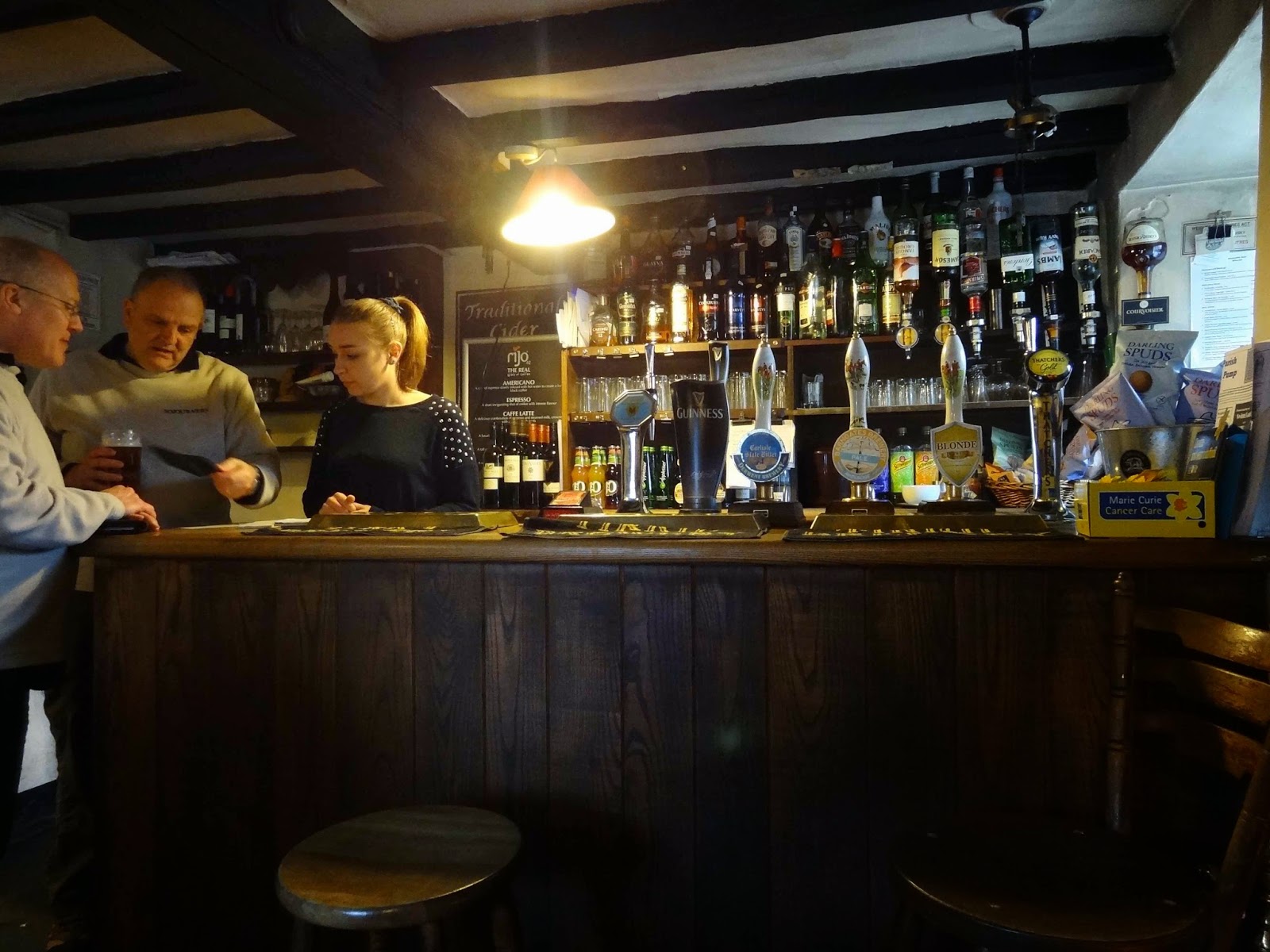 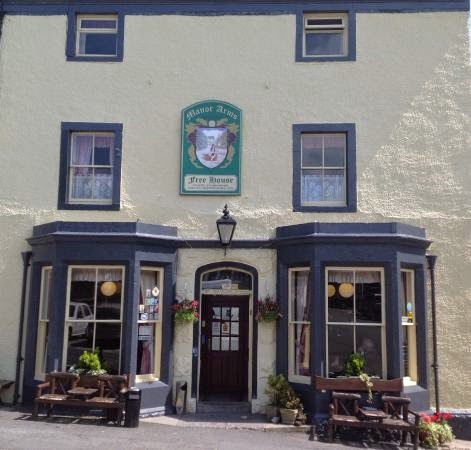 A good circuit. My favourite part of the Lakes. I used to run from Broughton Mills over great Stickle, Stickle Pike and back down the other side over Stanton Ground.

Mine too. Its the real Lakes (Except that there is no lake of course). You must have been fit to do that run.

Looks fantastic Alan, a cracking walk and fine photos too.

That brought back memories of one of our PreWalkDaunders. It's a fabulous part of the Lakes and two excellent pubs as well!
:-)

Meant to add - was sorry to hear Hoses isn't going ahead with camping - he's a lovely bloke and allowed us to camp and wouldn't accept anything in return.

It’s home to me Al even though i was born in Manchester. I had a word with yon farmer at the Shepherds Meet and he said that although he wasn’t going ahead with the site that if small backpacking groups or individuals wanted to camp then it would be ok. Just call at the house.

I'm worried about these " cyst's" - could be painful even with an apostrophe!

Thanks Laura. Mistake noted and rectified. I got it closer than "kissed" ha. I would blame predictive text but I don't think I would get away with it.

No problem - -looks quite a good walk - been extra - gusty up here too. Now I think it's back to winter.

Its a great area. Its got everything and not too far from home. The wind has died down here today but still chilly. Not great forecast over the next few days.

Hi Alan. I don't know how I missed this interesting post. It's many a long year since we visited that special part of the Lakes, probably because it's just that bit harder to get to for us. Not much of an excuse, I know! Maybe this summer.

I don't seem to have any time to write up the blog at the moment but hopefully all that will change soon. Anyway, it would mostly be about wind and rain with some hail thrown in for good measure.

Thanks Gibson. Yes coming here from the north does involve miles of minor roads and there is always somewhere easier worth visiting. When I first came here I walked in from Langdale.