Another fine day, but with the usual strong wind. And yet again another golf course adjacent to the castle had to be negotiated to avoid being struck by golf balls.. 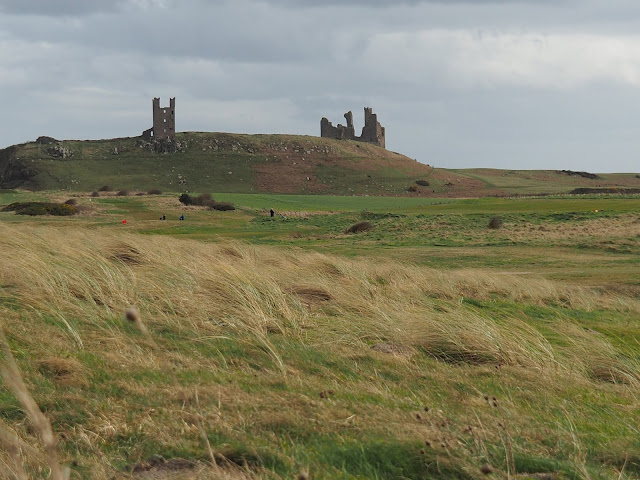 This stretch of coastline seems to have had its fair share of Second World War pillboxes and large gun emplacements. They can be found every few hundred yards along the dune line. Some are probably buried by the dunes now. 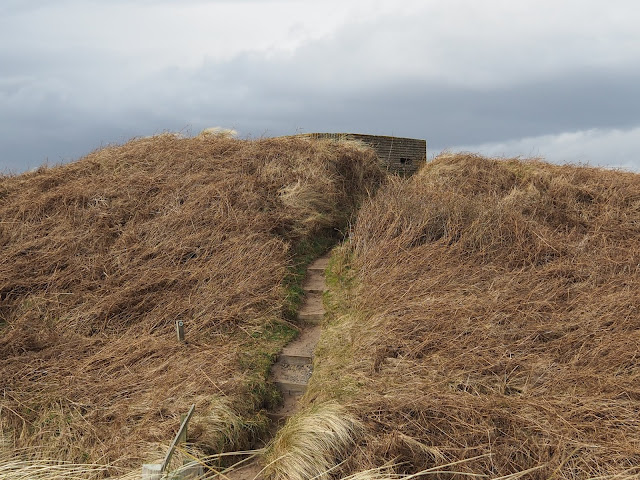 The walk along the beach is again a delight. So many birds to watch. Redshanks, Greenshanks, Plovers, Curlew, Sandpipers, Oyster Catchers, Sanderlings, Terns, Fulmars. Eider Ducks, Widgeon, and more. We saw lots of twitchers with large telescopic lenses.

After a couple of Km up the sweeping Embleton Bay, we came to the Embleton Burn which we had to cross. It wasn't particularly difficult and I would have crossed it but Sheila only had trainers on and didn't fancy the chance that  the bottom might be very soft. There was a small bridge not too far away so it was no big deal. 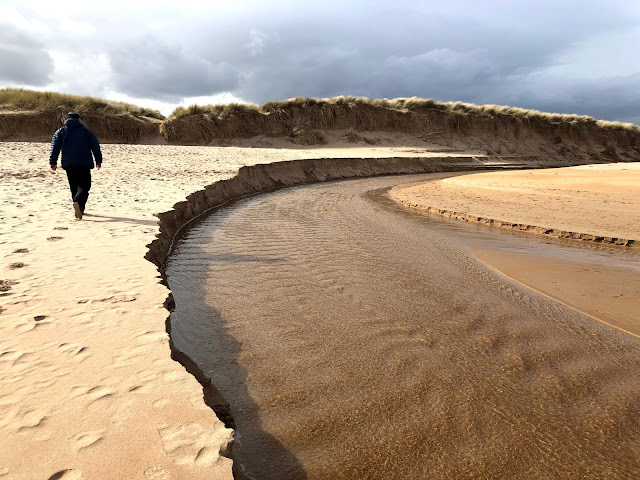 Across the bridge, you have the choice of carrying on along the beach into another vast sweeping bay, Newton Haven. The beach is fantastic with great views back towards Dunstanburgh Castle. It becomes obvious why they built the castle at that promontory. You can see everything for miles around. 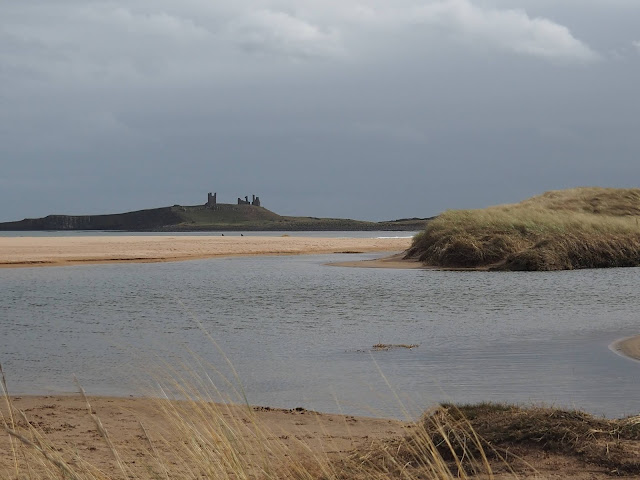 View of the castle from the Burn. 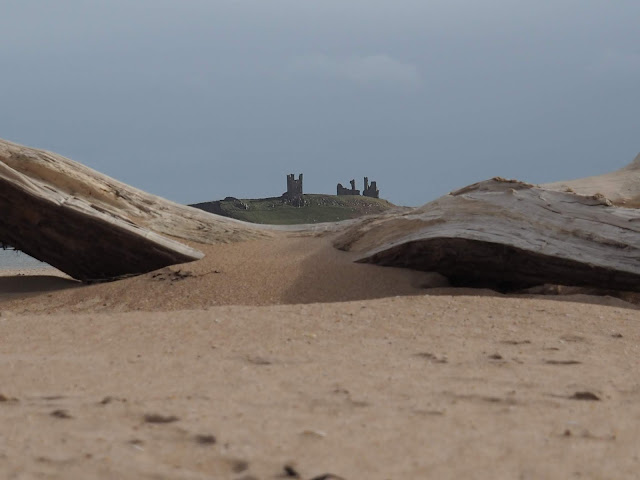 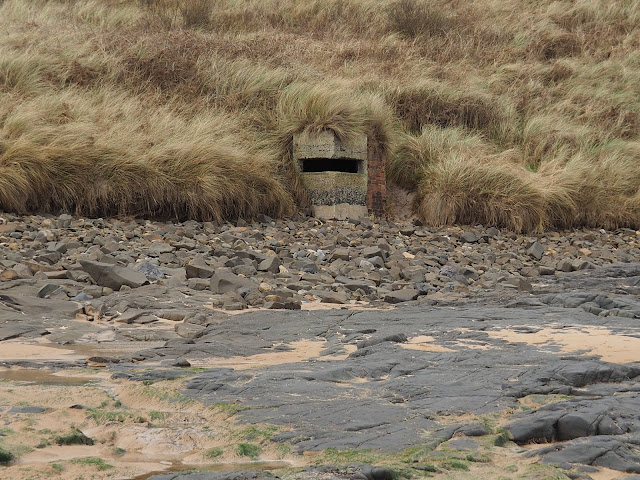 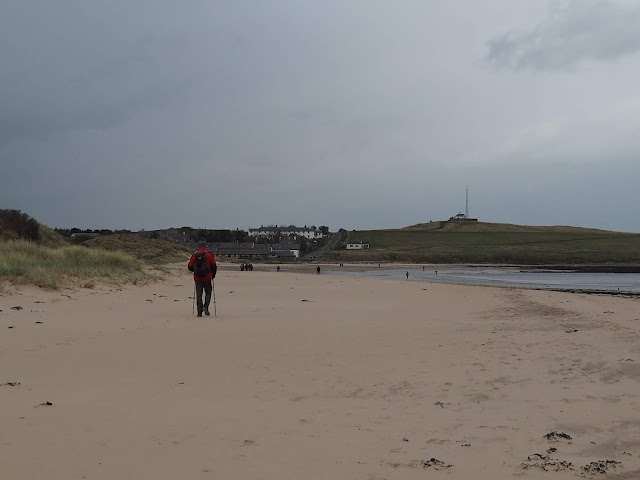 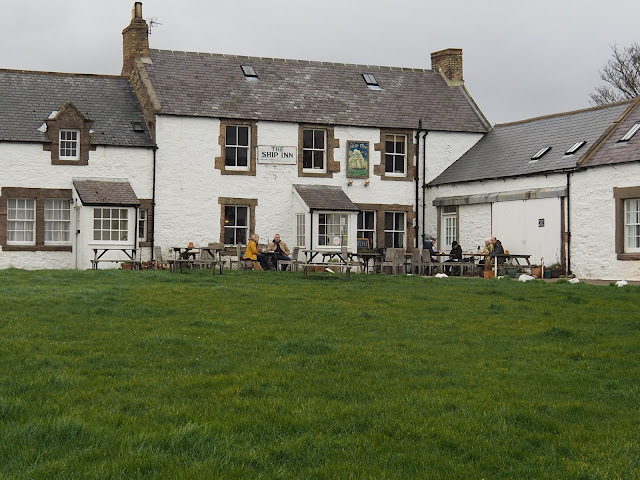 The Ship Inn at Low Newton where I believe it does fantastic food and has a micro brewery.
We didn't go in as it was just starting to rain and we wanted to keep going. Next time maybe.

In front of us was the mast and the map showed the path to skirt to its right. We took the wrong one initially and headed for Newton Point. Soon rectified. In 15 minutes we realised that it wouldn't have made any difference if we had stuck close to the shore as there is a path which is not marked on the OS map. More than likely a regular local dog walkers path.

We passed a few folk coming the other way and once through Newton Links Carpark we again had the choice of dunes or beach. The beaches are too lovely not to walk them so it was an easy choice.
Hardly a soul around but it was so windy. Glad to have extra layers with us.

The waves crashed and at one point I got wet feet by not taking enough notice. The sound of the sea today was wonderful. Great to be alive.
We had another river to cross, but this time we had no choice, it was too wide and too deep. We had to use the bridge. The weather was looking like we were in for a spot of rain and yes we had a downpour. 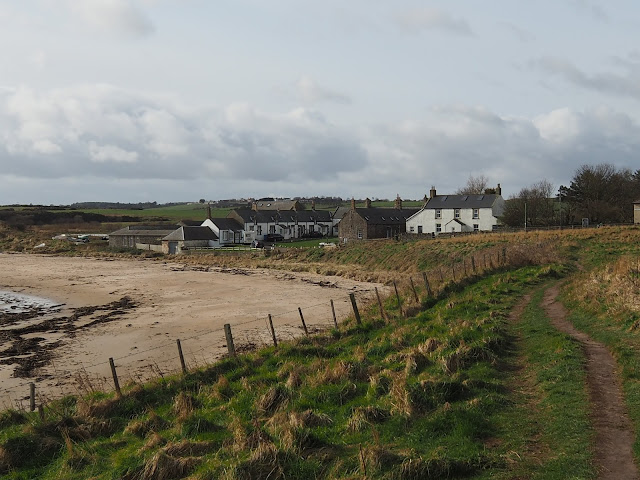 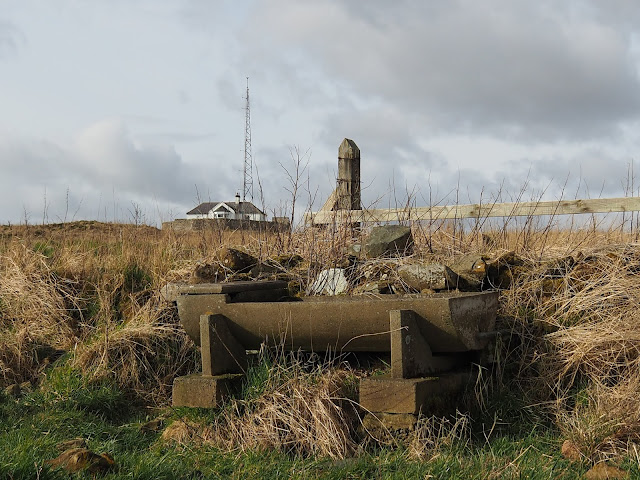 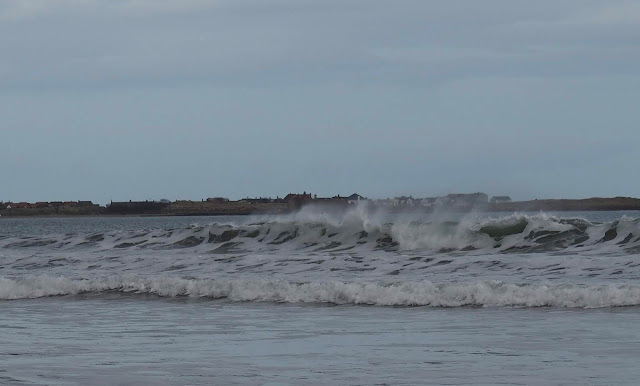 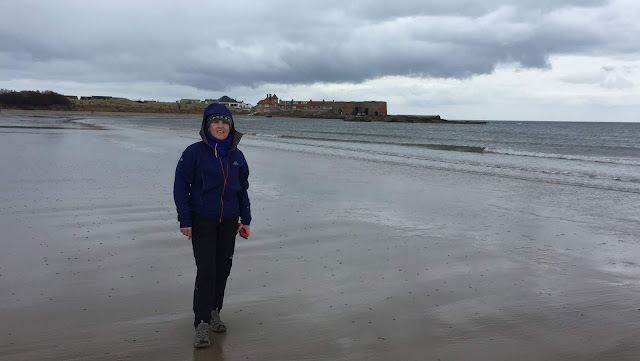 Beadnell in the background during a rainy spell. 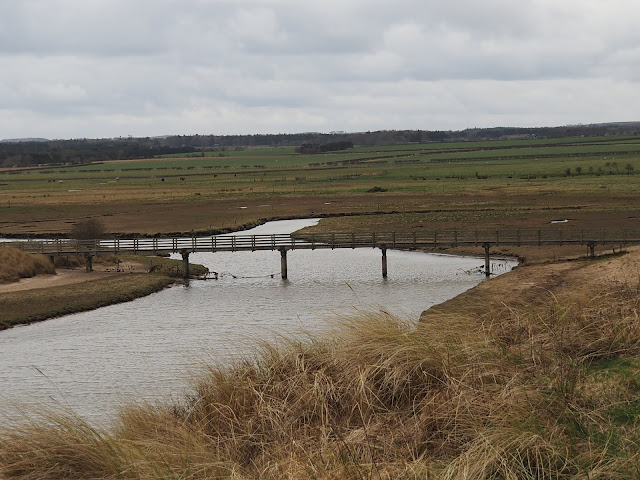 Bridge over the Burn. 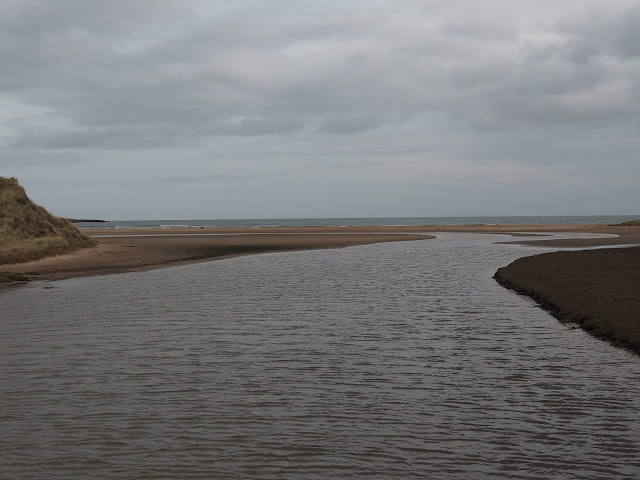 Tughall Burn.
On the other side of the bridge, the route leaves the beach and heads slightly inland. It goes through a depressing looking caravan park. One of those parks where very inch of space has been costed to the penny and the caravans are so close to each other. Many old vans too. We walked the beach into Beadnell but checked out the caravan park as well. 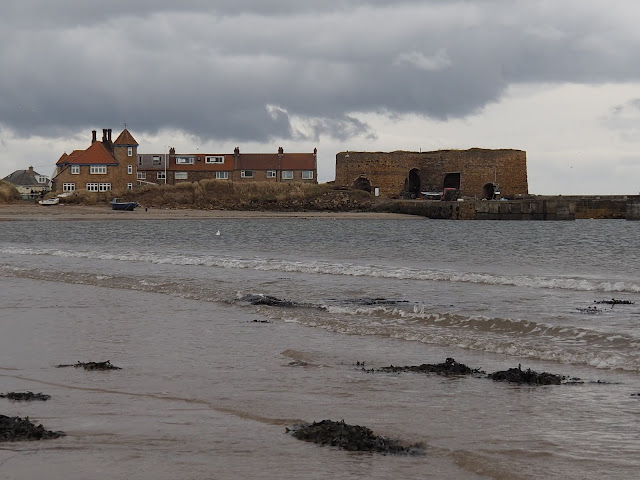 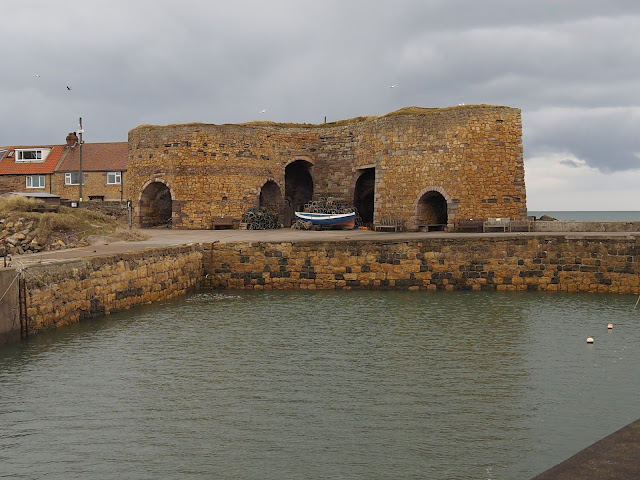 Lime Kilns at Beadnall. Built by Richard Pringle in 1798. According to the information board they did really well supplying lime all over the country until the industry finally collapsed.

An then we came across this tractor below. I have only ever seen one of these before and it was in Greece.
It's a Belarus 510, made in Minsk Russia. Very similar in a lot of ways to the Zeter tractors.
These were considered years ago as the poor mans machine.
Built in the 1950's.
I remember reading a story years ago that a company in Pakistan had starting making these from kits under licence. But they never had a licence so the "what's it" hit the fan. 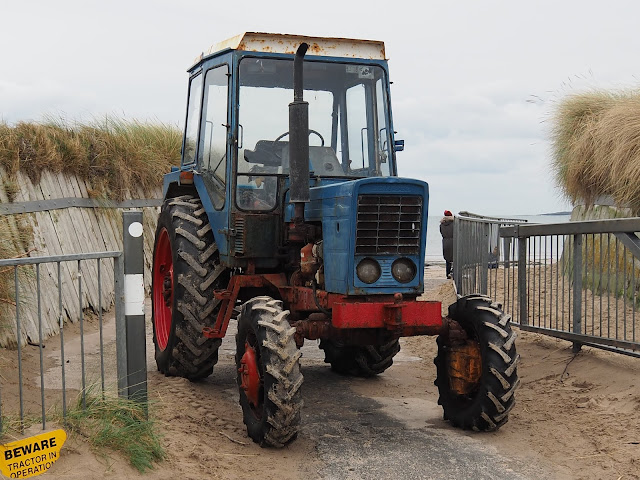 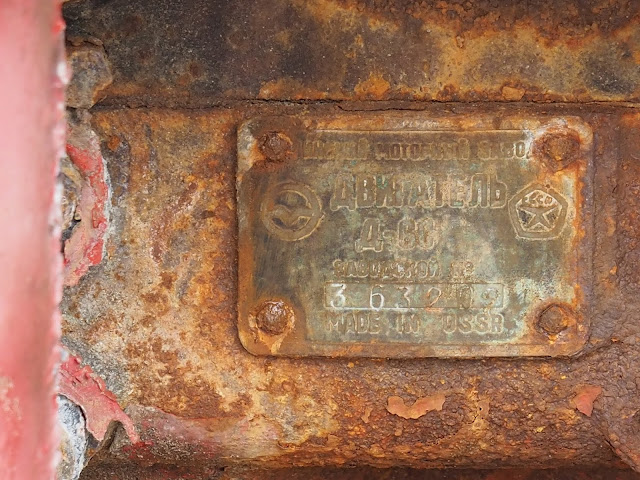 In the 21st Century Belarus tractors are regarded a bit better. Still not huge in the UK but are big in Asia and parts of Europe. Their only distributor in the UK is in Yorkshire, Liversage so google tells me. (I couldn't remember where it was). Today they use a lot of Caterpillar parts and build some huge machines. This image below is off the internet, I have never seen one but I thought some people would be interested to see how far the company has evolved. 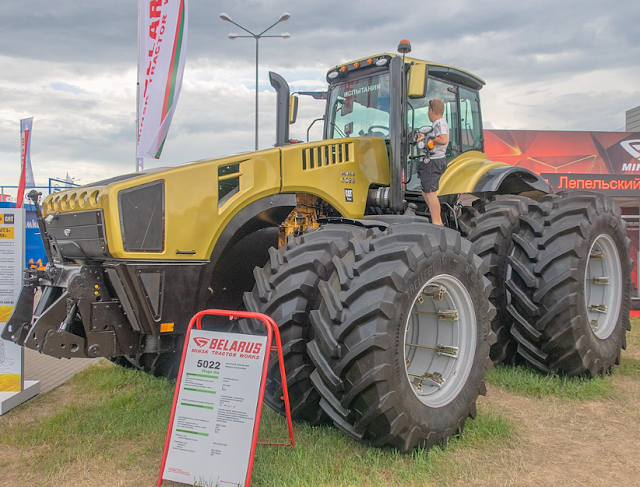 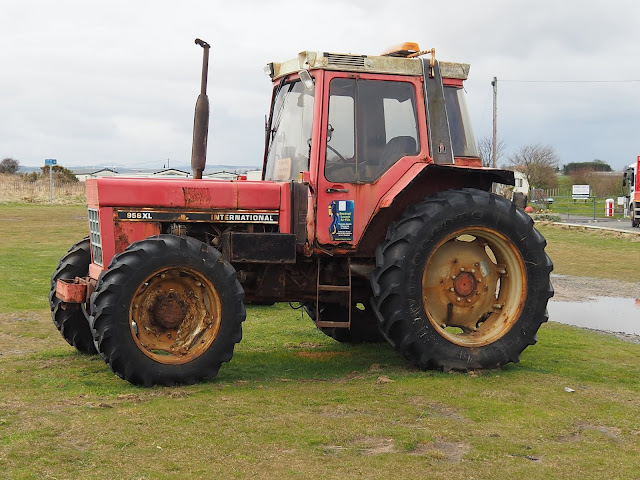 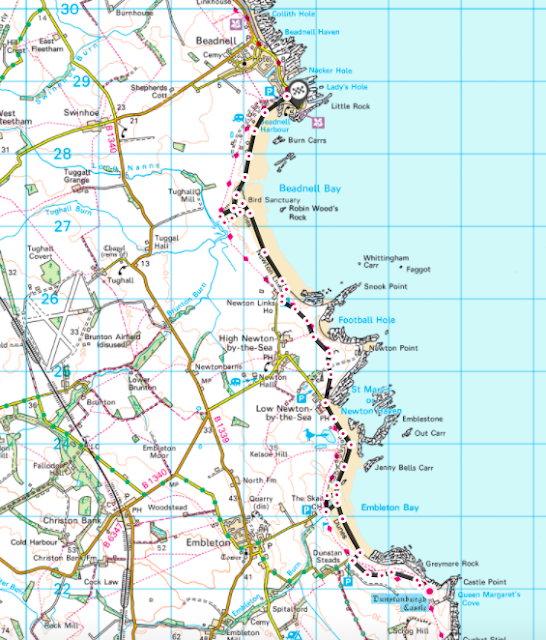 Even my son who was a motor cycle racing mechanic and F1 enthusiast was impressed with your beast, but I reckon you were more so with the older one. Well spotted.

We live in Bury and one of our local strolls takes us through Birtle. There are a few old tractors at SD83091 13231.

Hi Conrad, I’m glad to be pleasing your son. I wouldn’t mind owning one of those but Sheila wouldn’t have it in the front room. Ha.

Hi Stewart, thanks for your comment. Great to have you along. We are not far from Birtle so when we are allowed out I will pop over and have a look.Thanks.