We managed to attend one of Martin B's walks today which made a pleasant change for us. As a bonus it was also in an area that we had never walked in before.

It started from the village of Kingsley, near Frodsham in Cheshire. Finding the start point at the community centre was easy enough and parking was not a problem.

Kingsley, from what we saw is quite a small but nice village with good local amenities. Our small group of 7, which is allowed I may add under current covid restrictions set off past the well stocked Co-op and the Church of St John's to an ancient stepped style onto open fields between Hollows Lane and Pike Lane.

At the first fence we came to an obstacle which was going to play a major roll in this walk, MUD. We didn't know this at the time but we soon found out. It was a blessing that it was raining which meant we had over trousers on already which saved our trousers from the gloop. 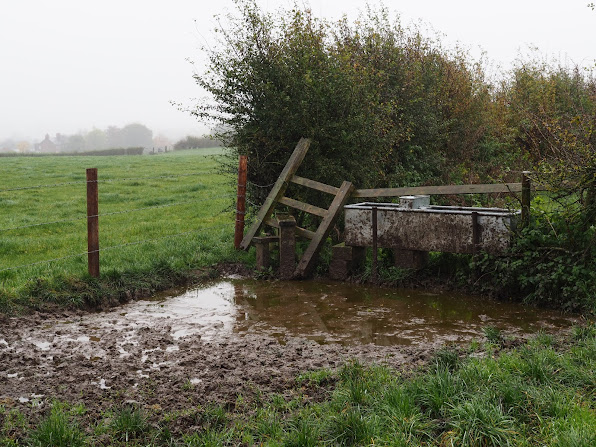 A broken stile and knee deep gloop.
We crossed Pike Lane and dropped down through a wooded glade, crossing a small stream via a foot bridge. The adjoining field path brought us in front of Peel Hall. 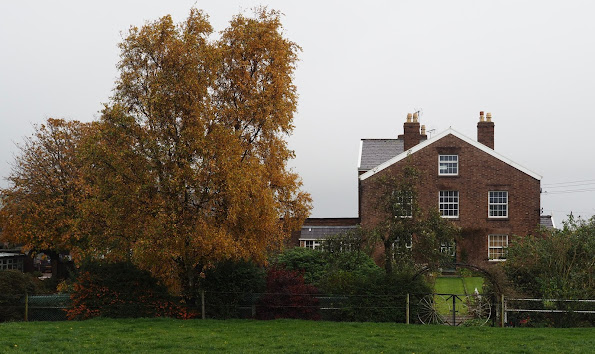 This image doesn't do the Hall justice as this is a moated site. The current residence dates to around 1840 but the moat which is a scheduled monument is pre 1660 when this was the seat of the Ardernes family, probably Henry. The original house burnt down.
The moat is now a source of water for the local cows which seem to be a shy lot. 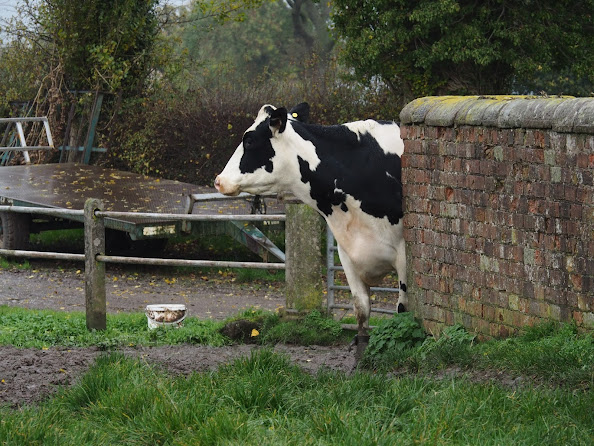 The lane away from Peel Hall was another muddy trod but we past a nice piece of kit. A McConnel centre mounted backhoe tractor attachment. 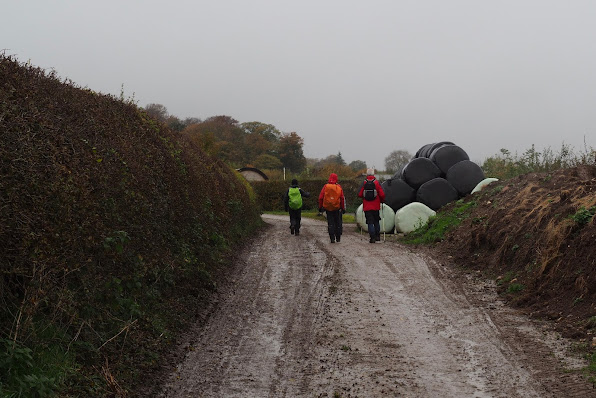 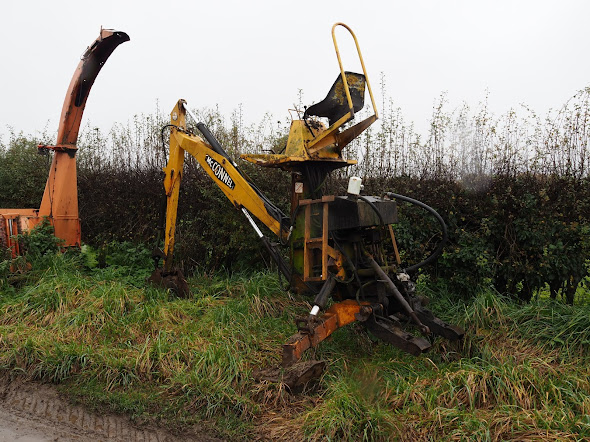 On route across fields towards the River Weaver Navigation we had the first of only two meanders on this walk. Meanders are where we stray away from the set route. We don't mind meanders.
However the mud became deeper and deeper and at one point I thought we might loose Sheila as she struggled to get over a really deep section of mud and slurry. 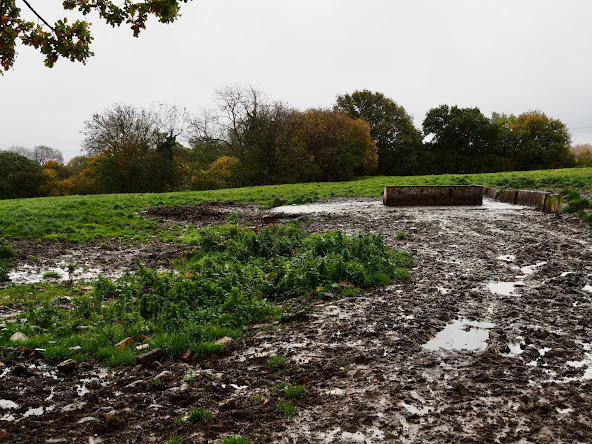 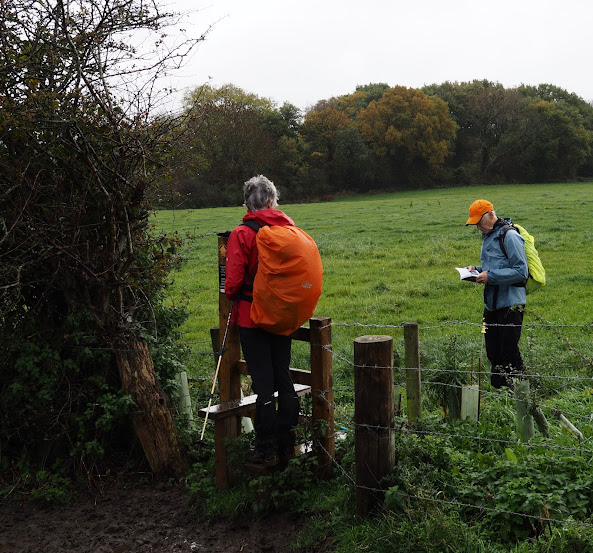 This way or that way? 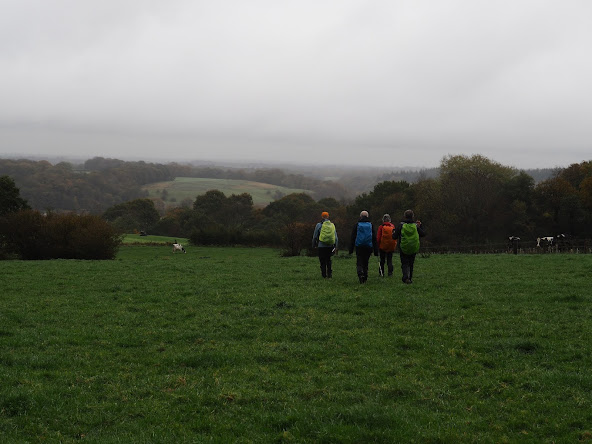 Walking into the gloom and rain. 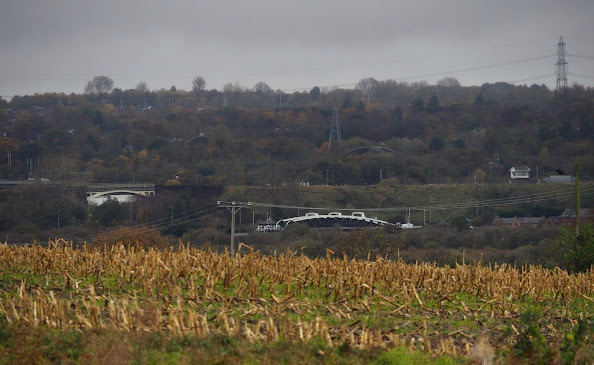 A darkening view over Sutton and Frodsham. 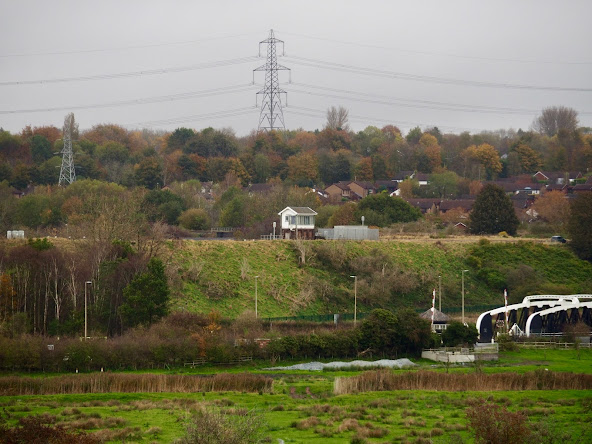 Signal Box on the Frodsham Line. 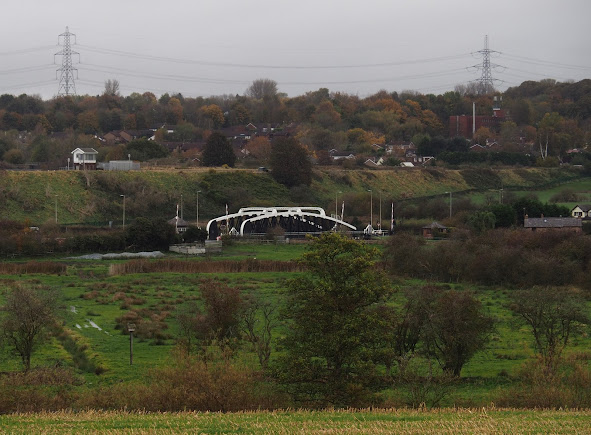 Sutton Weaver Swing Bridge and signal box on the railway built around 1850.
The field in the foreground of the above image was a field of corn. Quite a few husks were still on the ground even though it had been harvested. Sheila gave us a quick lesson in how to remove the grubs that hide in the stem of the corn. Her expertise in the subject was gained from her time in the USA where she used to sell corn on the cob direct from a farm wagon.
The weather closed in again for a short period of time before finally we got to see the sun. After our second meander we found the path and stile which led to the Weaver river side.
The River Weaver navigation was built to ship salt and clay from Cheshire. It was built in the 1750's.
There is a guillotine lock still surviving even though the "cut" stopped being navigated in the 1950's. 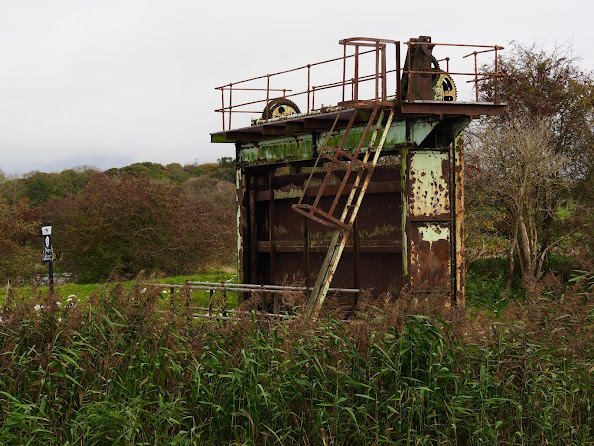 Disused guillotine lock.
Here we found a bench which brought about 11'is or 12' is as it was now. It was actually sunny, well bright anyway. 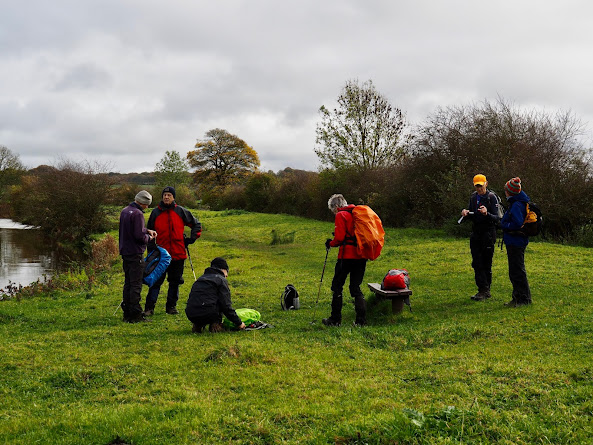 The muddy crew lunch break.
The "path" along the "Cut" was a real mess, made worse by hundreds of cows hoofs. We couldn't walk in the adjacent fields because they were just as bad and habited by Canada geese and Gulls. 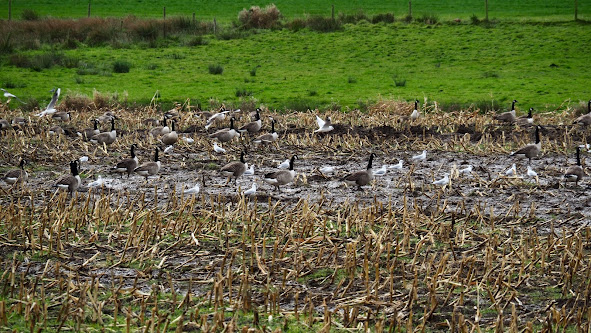 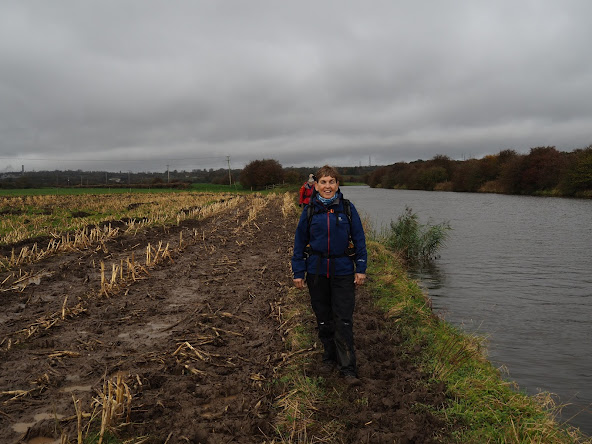 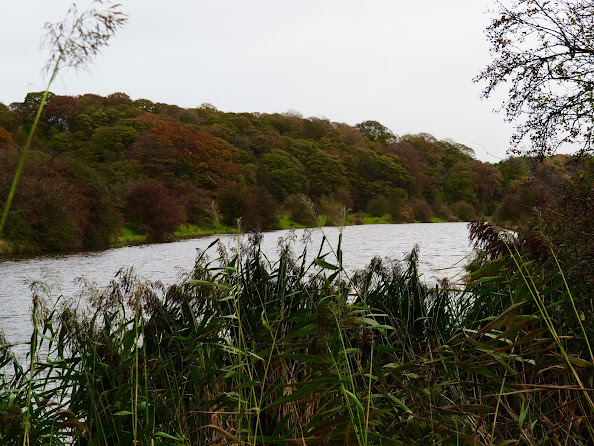 Once away from Frodsham Cut we made way for a group of young quad bikers led by an instructor. It was a guided route across farmland so I guess its a way of diversifying. It looked worth trying out one day.
I should of took a photo..... 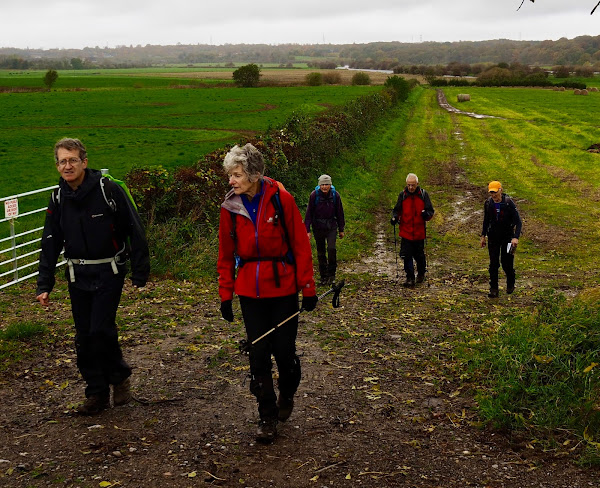 Back into Kingsley, we retraced our steps past the church and the Co-op back to the car park. 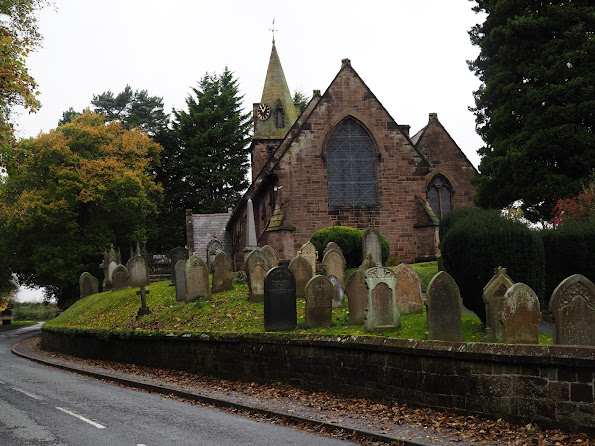 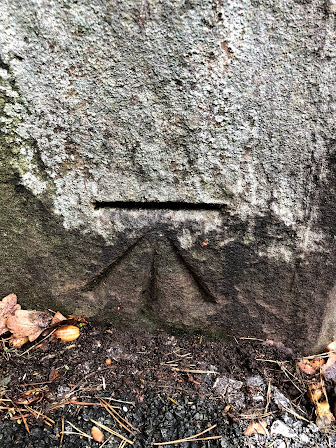 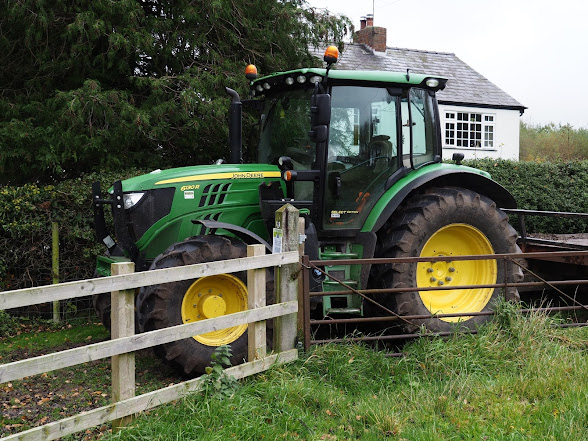 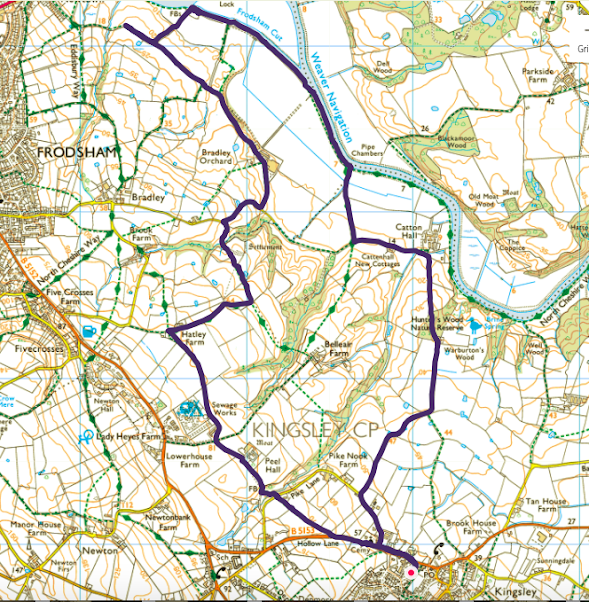 Todays route 10.80km. We walked in a clockwise direction from the red dot.
Thanks to Martin B for organising the walk. It was most enjoyable as was the company.
Posted by AlanR at 8:09 PM

That's an excellent report, Alan. It was good to see you and Sheila.

Cheers Martin, we will look forward to next time. Whenever that might be.