This weekend has been one to remember. The weather for one thing was near perfect for both the fell race and taking photo's with the new camera. 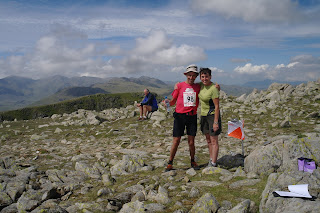 Sheila with Mike Breslin who completed another race. Mike is in his 70's. He'll hate me for saying that.

As one of the previous post states, we went up Grey Friar on Friday and it was a scorcher of a day. Seathwaite tarn was about 6ft lower than normal and there was very little ground water about. The views were good in all directions.

We hoped that Saturday was as predicted, a little cooler, especially for the runners. The day started off very warm and i had the thought that it was going to be another scorcher. However it started to cloud over somewhat and the temperature was down a little.

We headed of up to Swirl How from Three Shires and we got there in around the hour. We like to get there a little earlier than required so that we can take in the views and then have lunch.
We were being spoilt again as the scenery and the cloud formations were stunning.

Eventually the marshals at Three Shires came over the radio to say that the runners were coming through their check point.
We had a great view down Wet Side Edge and it wasn't long before the leaders came into our view. From that point on we had a very busy afternoon.

There was the occasional lull that enabled me to get some pictures. At one point the sky went dark and we thought we might get a drop of rain, but it soon passed us and the blue sky's returned.

There were plenty of walkers around, and showing an interest in what we were doing and the details of what the runners had to achieve.
The race is 20 miles and starts from Seathwaite, Duddon valley. They run up Harter Fell, Hardknot, Little Stand, Three Shires top, Swirl How, Dow Crag, White Pike and finally Caw before decending back down to Seathwaite.

The record for the race is 2  hours and 44 minutes, completed by Billy Bland.

Finally the last runners came past us and we were able to check the numbers tallied with Race Control prior to standing down.
A few more pictures and then we were off back to the Seathwaite for the presentations and the evening entertainment.

The music and dancing was great and went on until, (well i'm not sure what time we finished)!
The midge's were out in force but luckily they didn't cause me any problems.

It had been a super event, well managed and enjoyed by everybody.
I've put some images on Smug mug and you can view them here. If you wish.
Posted by AlanR at 8:38 PM

What a splendid day you had!

Alan.
The weather just makes it.
It's one big thing less to worry about on a day when so much has the potential to go astray.
It's good to share.