I had noticed these towels on the US backpacking or through packing sites. On checking out the suppliers website they sounded perfect for what i was looking for.
The only problem was that they were only available from the US. Considering the small cost and the usual tribulations of ordering from the US i decided to hang fire.
I kept a look out but nobody Europe based seemed to have made any comments or done reviews.
Strange, i thought, as its a light weight piece of kit.

It arrived forthwith from Amazon and i couldn't wait to get the tiny parcel open. 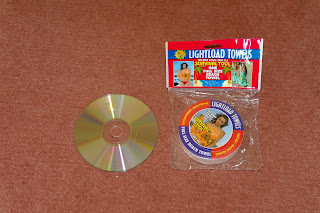 As you can see, against the CD its tiny. How do you get a bath sized towel into such a little space?

Having taken off all the packaging you are left with a very compact stone like disc. 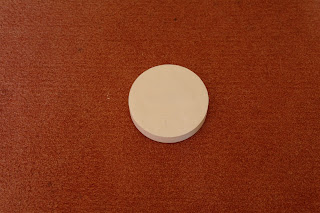 How the dickens do you open this i thought. Its too tight to peel apart. So, back to the wrapper.
It said hold under water or something like that, to release. So i did.
And open it came like a spell from Alladins lamp. Out came this bath sheet. Laugh, well never mind about that. There it was in all it's glory. 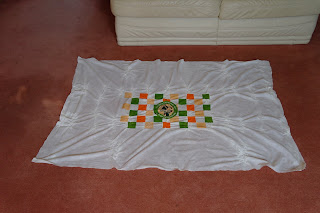 So, what do we have?
Is it Egyptian cotton, nice and fluffy? No.
Is it just a nice cotton towel? No.
Is it a big J cloth? Well it looks very similar, if it isn't.
It feels like a J cloth. It looks like an unbleached J cloth with a pattern on it. But! Does it work?
Lets Try before you Dry.

Sheila and i both showered and used the towel. Believe it or not it dried us both far better than our Lifeventure soft fibre towel. It soaks up the water far better than i thought would happen.
We were impressed.

When the towel was dried out it weighed 100gr. So we are going to split it in half which still gives us a fair sized piece of towel and it will be about 20gr. lighter than our current Lifeventure towel.

On the down side. With it looking and feeling much like a J cloth, it's a wee bit more delicate than a soft fibre towel and it will rip with rough handling.
All in all i would say its worth the £6.95. But it won't last too long.
We will be taking it on our next backpacking trip to Scotland in 10 days so the proof of the pudding will be in the eating as the saying goes.
More to follow later.
Posted by AlanR at 2:30 PM

That sound an interesting towel Alan. Look forward to hearing how it performed on your next trip. Have a good one - hope the midges are tolerable!

Gibson,
If it doesn't work we can batter the midge with them.

But is it any better than the 4-for-£2 microfibre clothes from Wilkinsons? Or 6-for-£3 from Asda...

Dehydrated towels - see I told everybody!!! But can you pack it back up into that little puch shape???

Rob.
I think it is better than the microfibre cloths that i have tried. But there is no chance of ever getting this towel back to its original size.

I don’t think it really matters Rob, it’s not huge even fully open. To be honest I actually cut it in half.