Sheila’s mums in Cumbria was the agenda for this weekend. We were a little concerned about the weather, especially setting off at 7.30pm Thursday night. The roads in the lakes, as many of you are aware are exceptionally dark and black ice can be lurking anywhere.

As it happened the roads were very quiet and we took it very easily, following the west coast road. It took us a little longer than usual but we arrived in one piece.
This journey to Sheila’s mums is a shopping weekend and not a walking one although sometimes we can get the odd days walk in.
Friday was not too bad a day and we managed to get most things done however it turned wintery as night approached.
It had been a little while since we had been for a meal in the Scree’s at Nether Wasdale so we decided to do that.
On the approach to Nether Wasdale from the west, there is a gradual incline and what goes up usually comes down. The descent into Nether Wasdale being quite steep. It was a little icy on the approach to the summit of the hill but once we hit the top that was it! The car decided that it didn’t like my driving and took over the wheel itself. Unfortunately for us, it had not passed it’s driving test.
For 50yds or so it decided it wanted to go sideways on the wrong side of the road and then it had the mind to do some off roading. Thankfully it missed the walls and the ditches and came to rest on the grass outside somebodies house.
Deep breaths, a wipe away of the sweat/fear and it got a good slapping.
Now back under my control i managed to persuade it to get back on the ice slide, sorry road. We still had 50 yds of hill to descend and with some shaking and plenty of handbrake we started off. Gradually we slowly but surely reached the bottom. All was very quiet in the car. A sharp intake of breath.

As it was now snowing extremely heavy it was decided to abandon the idea of stopping for a meal just incase we couldn’t get out of the village in an hour or so. To be honest we wasn’t hungry anymore anyway.
We crawled at about 2mph through Nether Wasdale and onto Santon Bridge and back to Gosforth where a huge cry of relief could be heard all the way to Wasdale Head.

Later that evening whilst still shaking in the Gosforth Hall we learnt that we were not the only ones to come to grief on that hill. Fortunately no injuries though, just a dented pride.

It was quite a surprise then that i did manage to take a few photo’s without camera shake. Hope you like them. 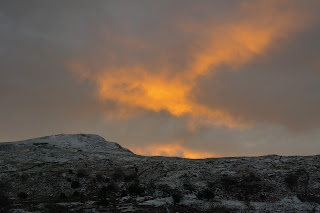 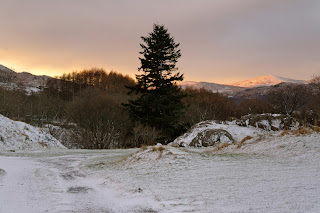 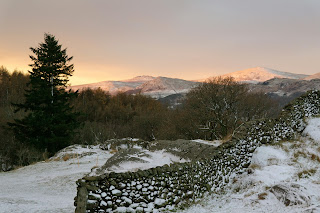 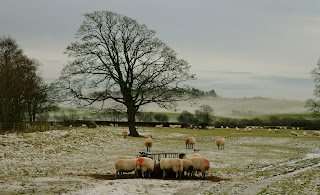 Various knipemobiles have performed similar antics. I'm not sure what gets into them.
I had a mile of the stuff last weekend, the problem being that the van in front kept getting ever slower and, in effect, I had no brakes.
2 mph seems a bit quick.....

roads not happening out there at the mo - be safe!

Mike,
I've had 4x4's for the last 20 yrs and now i'm back to a 2 wd. I forget sometimes what it's limitations are. I've learnt a lesson this weekend.
I'm so glad it was only 2mph.

David,
The main roads in Cumbria are ok with care. It's the side roads and the fell roads that are treacherous. We spent 2 hrs breaking up sheet ice outside the house just to get the car out on Saturday morning. The council hadn't gritted them.
Thanks for kind comments on the pics btw.

A worrying little adventure! Like the pics Alan and glad neither you, Sheila or the car got any dents.Still loads of snow here (and snowing again) but at least the main roads are OK for the moment.

Hi Gibson,
Yes it was a scary moment. One i hope not to have again.
We are all fine, thanks for asking.
It looks like we are in for quite a cold spell.
It’s snowing in Manchester City centre but it’s quite a bright crisp day here in Rochdale.

I *do* like your pictures Alan - First class! As I was reading your slide down the hill it had me breaking out in a sweat too! Helpless, I was1

Alan,
Martin,
Cheers for pics comments, very kind. The “trees/sheep” pics were taken just before dusk and the Scafell pics taken breakfast time, According to people who know about these things, those are good times to take photo’s.
I am pleased with them.
The hill run was definitely a brown corduroy moment and i am not sure if you can get snow chains for low profile tyres but they would have been useful to say the least.
We did discuss this option and i will check it out or at least a different tyre type. Thanks.