It hammered down during the night but it has stopped raining for the moment.
Decided to go back down the glen and stretch the legs with a walk up to Loch Skeen.
3 cars in the car park and Mr Ranger is there.
It is certainly a steep pull up to the level of the Grey Mares Tail waterfall which was flowing spectacularly. (Photo from Google Images as i left my camera data cable at home) 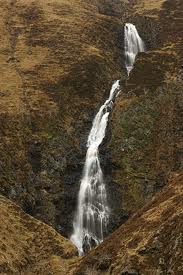 It took an hour and 15 minutes to reach the Loch which almost hits you full in the face as you arrive. It is a beautiful spot and we had blue skies at last with some sun. 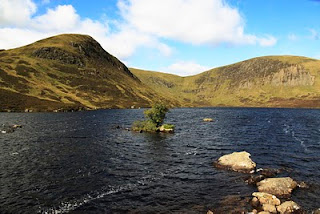 All the tops were clear, first time this week. Absolutely stunning.
We soaked up the tranquility for a little while and took some photo's which i will post when we get back home.
As we turned to depart the first shower came and went. Nothing much thankfully.

Quite a few people were now on the way up the track and we were pleased to have got up there early as we had it more or less to ourselves. ( there was 2 guys fishing).
Reaching the main road we disturbed a hare and it shot off along the tarmac at a fair rate of knots.
A lovely day. Hurrah.
Posted by AlanR at 5:15 PM

Alan glad you and Sheila have seen some sun. Not the best weather at the moment. I remember that walk down from Loch Skeen past the Grey Mail's Tail - absolute agony with my knees back last September. However it is a great place to walk.
See
http://markswalkingblog.wordpress.com/2010/09/21/trip-report-southern-uplands/

Have you done all the posts on the trip using your smart phone? Was it easy?
Mark

It is a place I would like to go to. I tend to ignore the Southern Highlands as I go further North. I keep saying I will go there but don't.

Hi Mark,
The first few posts were sent via HTC Desire which is easy and far better than my Blackberry.
By the way it's raining again now.

Martin,
You should ignore it no more. It's fantastic. Not massive like the Torridons or Coulins but empty and very steep in places.
Don't tell anyone it's empty though.

Mark,
I latched onto the WiFi in Moffat main street to send the rest. Some freebies.