The Invasion of Hartington.

Sheila and I were very pleased to be invited on "A Christmas Walk" by Martin and Sue Banfield. AKA blogger Phreerunner. Postcard from Timperley.
It was to include a walk taking in Wolfscote Dale and part of the Tissington Trail in the White Peak area of Derbyshire.
Lunch was organised at the Charles Cotton Hotel in Hartington, approximately mid way.

It shows how well people appreciate Martin and Sue's walks because all 31 persons, including the two of us,  who said they would attend, actually did.

There was already a small number of cars parked in the layby just North of Alsop en le Dale on the A515 when we arrived at 9.45am and it didn’t take much longer for the whole brigade to assemble.
Greetings over, Christmas cards swapped , car keys lost and found, gear donned we set off across the A515 towards the old railway track which forms part of the Tissington Trail. Anybody looking down from above might have thought Noah’s Ark was close by.

The old track belonged to the London and North-Western railways and ran between Buxton and Ashbourne. It was opened in 1899 and closed in 1966. Fortunately in 1971 it was bought by the Peak National Park and Derbyshire County Council.
Part of the old line, just south of Buxton is still used for quarry freight today. 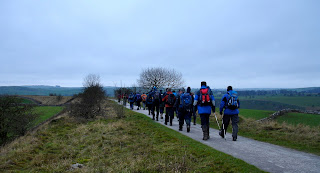 Two by two they marched to Hartington. 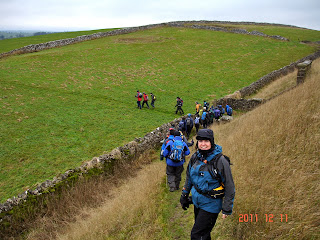 Leaving the Tissington Trail for a while. We ploughed on through intake land which proved to be very muddy, the clay sticking to the boots making them feel ten times heavier than normal. The troops were revolting. 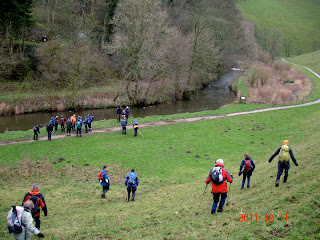 Once we had slithered our way down to the River Dove, which was a kind of a ski slope without snow, it seemed to warm up a bit which resulted in the removal of a layer. 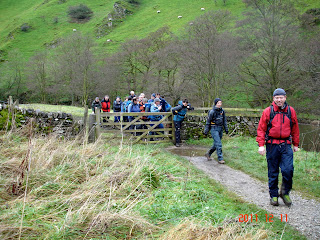 At every gate, stile or wall, we formed file and it seemed to take ages getting everybody through.
Then, just as it started to rain Martin dropped his rucksack and suggested that it was time for coffee.
Well why walk in the rain when you have coffee to drink.
Caramel fudge cake and chocolate brownies being offered out to all by Martin And Sue.
It was a nice spot to picnic, just where Wolfscote Dale joins Biggin Dale. 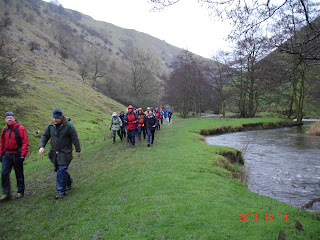 A very pleasant walk onwards to the footbridge at Beresford Dale. Lots of social chit chat about gear and good places to walk and overnight. All extremely Sunday.
It was good to meet up with Mick and Gayle who’s walking trips makes ours pale into insignificance. We had kept up with Gayle’s writing for some time but we had never met.
We also found out later that another set of bloggers were on the trip but unfortunately due to the high turnout we didn’t get chance to talk. Helen and Colin.
You can catch their blog HERE. 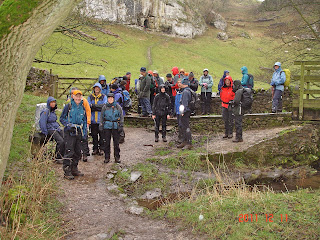 Pausing for a few minutes at yet another stile, it proved a good spot for a group piccy. 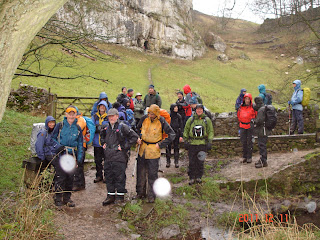 And yet another as rain got heavier.
We marched on until the rooftops of Hartington came into view. It had been raining quite heavily and it was a wet army that needed food and drink as arranged at the Charles Cotton Hotel at 1.15pm
Upon arrival, the 31 rucksacks, jackets, overtrousers and pairs of muddy boots were found houseroom without complaint from the management.
We were shown to a very nice suite for lunch and all was ready as Martin had arranged previously. The food was excellent and the staff very accommodating with nothing too much trouble. Many of us wondered if it would be possible to have a little snooze before setting off again as the portions were substantial but it wasn’t to be. 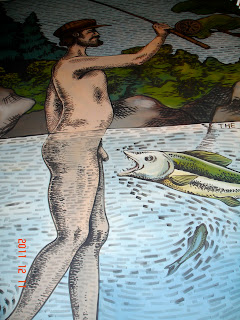 A portrait in the Ladies Powder room on the perils of “Fly” fishing. 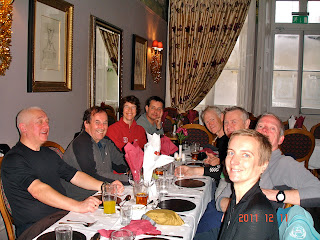 A fine bunch of lunchers.
During the frivolities, it absolutely lashed it down, the rain was bouncing. Again perfect timing to avoid a soaking. But we had to set off. So with the bill settled we were allowed to proceed on our journey. The invasion of Hartington sadly left behind us. 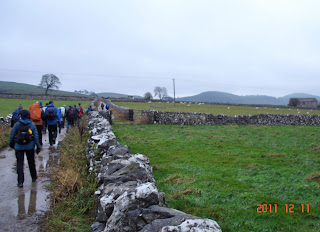 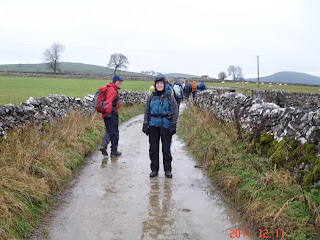 We headed off through the village and passed the beautiful Youth Hostel. Turning onto aptly named Leisure lane. It was raining still but not too heavy. 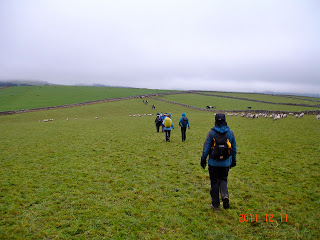 Obviously lunch was taking it’s toll as the legion got a bit spread out on the way to Dale End. 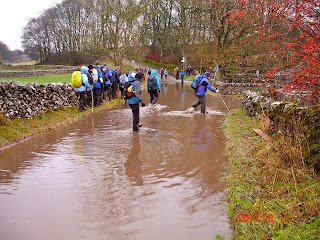 Then as we passed through Dale End the result of the torrential downpour that we had managed to avoid had to be surmounted. It was quite deep in places but it was passable on the left banking.
We watched a couple of cars plough through it without a care for the vehicles engine or the bow wave that it made.
Passing through lovely Biggin village and Greenhead farm we soon met up again with the Tissington Trail which was followed back to our start point.  It was unusual to see twin lambs at this time of year too.
Darkness was falling and due to the ease of walking on the old trackbed progress was somewhat rapid.
We was hoping that it would be dark enough for head torches before we finished the walk because 31 torches would have made a good photograph. However, this wasn’t to be and it wasn’t until we got back to the vehicles that darkness fell. 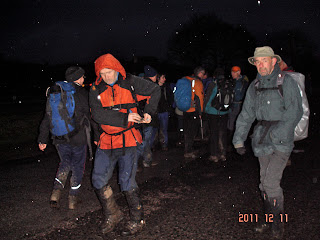 We had really enjoyed todays walk and we must say a big thank you to Martin and Sue for organising it, also to the management and staff at the Charles Cotton Hotel who made lunch a pleasure and to everybody on the walk. Thank you so much.

A little history:-
Charles Cotton ( April 28, 1630 – February 16, 1687), lived at Beresford Hall, now demolished, wrote, with his great friend Izaak Walton, a remarkable book about 17th century rural England called ‘The Compleat Angler’. No other English language book, other than the Bible and Book of Common Prayer, has been reprinted more times. He shared his time between an extravagant life style in London society with the quieter pleasures of his home and the Peak District. That is when his creditors were not chasing him - then it is said he hid in a cave in Beresford Dale. The fishing lodge he built still remains on private land in Beresford Dale, but can be seen from a distance when approaching the dale.


Sheila and I had stayed in Hartington the previous night and when we arrived there on the saturday afternoon it was a completely different view. A few inches of snow which disappeared overnight. 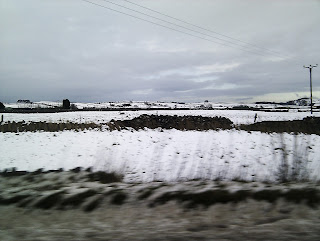 Not a great image as it was taken from a moving vehicle. 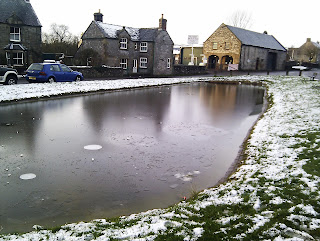 Hartington village pond.
We stayed B & B at the Hayloft and can thoroughly recommend it and also the friendliness and good food at the Devonshire Arms.
Posted by AlanR at 12:13 PM

Thanks Alan, it was great to have you and Sheila along and to see you looking well. Your report, and Gayle's are both excellent. I don't know what I can add to them, but I'll try tomorrow - my feet haven't touched the ground since Sunday.

Hi Martin,
We had a good time. I obviously have been in the White Peak so many times over the years but i hadn't walked Wolfscote Dale. So it made a nice change.
Hope you had a good plod today. I dropped my Scarp 2 off with Mick.

Oooh! An area I know pretty well, being brought up on the edge of the White Peak!

An excellent turnout, it seems, and a nice write up, too!

Last time I was in Hartington I stayed at the YHA and have vague memories of sinking one-too-many pints of Whim Ale's Hartington IPA in the Charles Cotton.

Years ago, one February, I had the terrible "misfortune" to be snowed into the Devonshire Arms for a couple of days. All that ale to drink and nowhere to go. It was awful ....

(There's a theme building here. Anyone spotted it yet?) ;-)

Hi Jules,
It was a good day out. Pity the snow had gone though.
Shame getting snowed in at the Devonshire. Its a smashing pub that. I'll try and arrange similar for next time.

Greetings from an Amish community in Pennsylvania, I'm just checking out different blogs and thought id leave a comment. Happy holidays to everyone as well. Richard from Amish Stories

Hi Richard,
Thanks for popping over and leaving a comment.
Hope you find something of interest.
Merry Christmas.