Order of the boot.

I was in Rohan this morning buying a pair of trousers. I had initially gone in to buy a pair of Rohan Bags but i couldn’t find a pair to fit. My athletic physique is obviously different to the Rohan man of the 1970’s.
I also wanted to have a look at the Striders and the Trailblazers as well, and then make my choice. I actually settled for a pair of Fusion after trying on about 10 different pairs.
But what caught my eye was these Lapka boots. Rohan’s own with Barricade waterproof liner. £125 a pair. 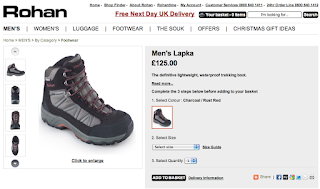 They caught my eye because i had only recently been looking at a pair of Brasher Lithium GTX, also funnily enough £125 as below. 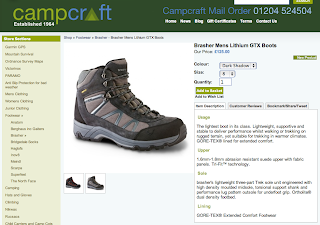 Now it may be a co-incidence or my poor eyesight but don’t those 2 boots above look very similar apart from a bit of colour.
So do i take it from this then that Rohan’s Barricade is actually Gore-Tex GTX? (XCR)
I can’t imagine doing a badging exercise would change the internals of the boot. But i could be wrong obviously. 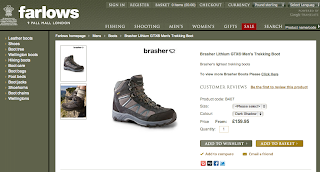 So now that it looks to me that Rohan boots are actually Brasher’s i thought i would see what prices i could find. Well i was staggered to say the least. At Farlows above they are a 5p off  £160. 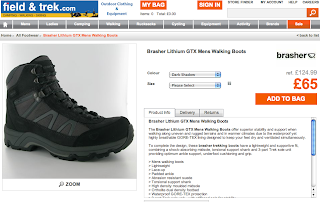 At Field and Trek and also Sports Direct, which are one and the same company now, you can get them for £65 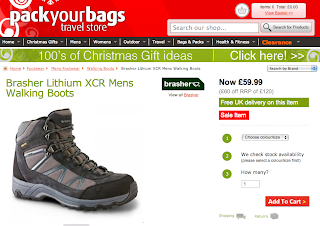 Or £59.99 at Pack your Bags including free delivery! Wow.

I actually found a company selling them for £49 but they had no stock left. Why am i not surprised.

Lesson, Shop around, don’t buy the first ones you see, and the name, well it could be anything, don’t go off the badge.
Posted by AlanR at 4:15 PM

Compliments of the season to you, and I look forward to more interesting posts in the new year.

Sir Hugh.
Compliments to you too, and i will try and make them more interesting in the New Year.
I hadn't been on Awooza. so thanks for that.

Rohan stuff used to be innovative, now it's just rebadged tat like all the rest.

that last bit should read "Rohan stuff used to be innovative, now it's sourced from tat-makers just like all the other low-end and middle-of-the-road brands."

Hi BG,
I had noticed but i wasn't out to bash Rohan in particular, who's clothing i actually like. I was more highlighting the point that not everything is as clear as it may be imagined and to look around before spending the likes of £160 when you can get the same for £50.
Some of the Brasher range i quite like the Kenai's for example.

I hope you didn't think I considered your posts uninteresting - I just meant more in quantity - sorry for the ambiguity.

Not bashing either company really, but some of their claims are quite dubious considering that the products are the same except for the branding...

Sir Hugh,
I guessed as much. I enjoyed the humour.

BG,
Marketing eh! Not worth the paper its written on. I wonder who makes Rohan waterproof jackets. The claims are indeed top end.
Any idea's?

A bunch of downtrodden, malnourished and exploited Chinese kids, I'd imagine. I'd love to be proven wrong.

BG,
Mmm. If that's the case, i will be gobsmacked!
Not that your wrong, possibly Vietnam. I just don't know but i will endevour to find out.

Thanks for that BG. So we were both right on sourcing. What people are paid for producing them or working conditions i cannot determine.
I bought the Fuzion trousers and i can say that the quality is excellent. The design is just what i want. The staff were very very helpful.

We used to be told that the Japanese just copied western cars, made them cheaper, they were unreliable rust boxes and shipped them here. We now know just how untrue that propaganda was and i know it first hand having worked out there.
Maybe the clothing industry still has a way to go yet in the east but to what degree Rohan are involved, who knows without seeing it first hand.

That is all utterly depressing. In fact, I would go as far to say that it is verging on fraud.

Rohan and / or Brasher should hang their heads in shame.

Hi Alan,
Please don’t let it depress you, there are more depressing things out there. Unfortunately badging is not uncommon and it’s not fraud and they don’t have to tell you. I certainly gave Rohan more credit than they now deserve. Brasher, well.

I’m sure that people who work in this industry day in day out could highlight lots of other examples of this type of marketing.

Badging may not be fraud but some of those claims are made with intent to mislead potential customers.

If I was to replace all of the the Skoda badges on my car with "BG!" badges, would that allow me to trade-mark it and to claim that I'd engineered it? I think not.

I had my suspicions that Barricade was Goretex. It is highly unlikely that Rohan would actually have their own technology. I like Rohan stuff, always good to hear from bloggers and their bargains. I looked at the Lithium, but went for a pair of Salomon Quests

BG, There would have to be an agreement between you and Skoda and that’s where it all starts. The Skoda as far as i am aware is a”Platform” vehicle. Uses the same parts and floor as other vehicles.
Marketing peeps make up slogans and claims that are right on the edge if not over when it comes to product advertising. I don’t think truth has much of a part to play.

Hi Mark,
I didn’t actually buy these boots. I just noticed the coincidence and it went from there.

Just as added confirmation... the picture of the "Ground Control (TM) sole unit - heavily lugged and designed to offer maximum traction and braking on uneven ground and steep gradients" has a big brasher symbol.

Barricade is Rohan's own membrane, and from my experience it is actually far superior to Gore Tex

Thanks Anon, Not sure about far superior, but i will go with much better. Barricade is nearer to eVent than Gore-Tex though. Specs are very similar.