With my 60th birthday coming up next weekend Sheila very kindly decided that we should have a long weekend away on our own. She had kept all the arrangements very secret including the destination.
I was told what to pack and the fact that she said that i couldn’t take a rucksack or Aldi bag to carry my stuff in was a bit daunting. I got the car out of the garage but she said we won’t be needing it as we are getting the bus. It’s Manchester i thought.
Wrong. Getting off the bus at Shudehill station we then set off across town with me pulling this wheeled contraption that we had to dust off before filling it. Piccadilly train station was very busy on a Friday morning. I got my orders to wait and don’t look at the timetable board. Then we got on a train at platform 11.
Still no idea where the destination was we sat there for 20 mins before being told “engine failure” everyone off and get on the train at platform 1 for Chester. The bubble had burst. I think Sheila had done a great job of keeping it secret and a very nice surprise.
Believe it or not i have worked all over the world but i had never been to Chester. Only an hour away by car. Alighting at Chester’s lovely station, although it could do with a lick of paint, it was still architecturally pleasant. I had no idea of the destination.
Again i dragged this contraption across the city and within 15 minutes we entered the foyer of The Chester Grosvenor hotel with it’s two top hatted and tail coated concierge.
To say this is a stunning hotel would be an understatement. 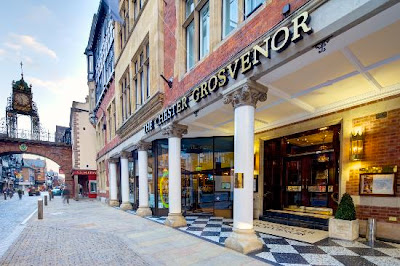 The Chester Grosvenor, owned and named after the family of The Duke of Westmisnster. 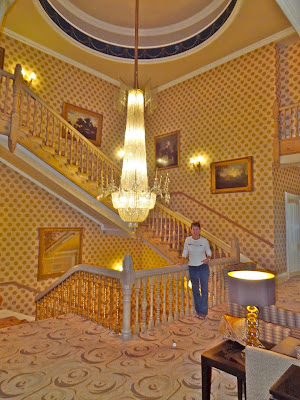 On the way up to our room, number 322, we passed this magnificent chandelier.

Sheila had a spa afternoon planned and i was told that during my time on the very comfy relaxation couches that i fell asleep and was snoring. Well anyone who knows me would tell you that couldn’t have been me! Hmm. It was a pleasant way to spend the afternoon before pre dinner drinks and a lovely meal in the restaurant.
To walk our meal off we had a stroll through town before stopping off at a pub across the way called the Boot Inn. It was indeed a surprise to find a good pint of cask Conditioned Ale at £1.80. We sat next to a table of elderly gents and soon got chatting. It turned out that 2 of the gents were twins of 74 years and both had worked at the Grosvenor as painters and decorators. One had been there man and boy whilst the other had worked there in his later years. They were real characters, Peter and Tony, and were very proud of their association with the hotel. You must go and see the Westminster room we were told, its spectacular. They also told us a story of how during a fire practice the fire officer had told them to vacate the building, but they needed to finish painting one of the rooms before the guests arrived and so wouldn’t leave. That room happened to be room 322! How spooky was that. Our very room.
We had a lovely evening and they asked us to come back in tomorrow. We had a meal booked in the Simon Radley restaurant tomorrow night and thought we might be a bit pushed for time but said we would try. 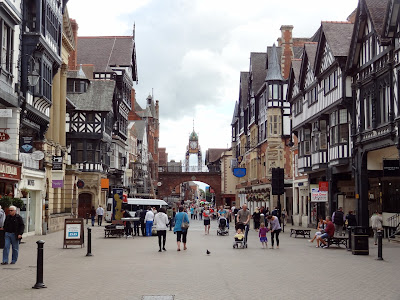 Eastgate and what must be the most photographed clock in the world.
The Grosvenor is on the right with the blue sign.

A great start to the secret weekend.
Posted by AlanR at 11:56 AM

Chester looks very nice, definitely on the list for a visit. Happy Birthday!

Fantastic Alan, what a lovely surprise for you. Wonderful and you deserve it.

Cheers Mark. More to come on Chester in pt2. Well worth a visit BTW.

Or, thanks Dawn. Very kind. It was brilliant and such a change.

Happy Birthday, Alan. You can now afford to be ill...

Thanks Martin. Yes free prescriptions. My doc told me on Monday. Pity i don’t get a bus pass though.