Watergrove is a reservoir and small country park situated just North of Rochdale. And surprisingly this was my first visit.

I parked beneath the great dam wall and checked i had everything in the rucksack. I hadn’t. No compass, but i had a GPS with me. But it had the wrong map in it. I had the Lake District map which was obviously no use. All i had then was an os map, which was the right one and the GPS which would give me my grid reference if i needed it that badly.

So off i started with the intention of walking the surrounding tops and not the circular reservoir walk.

Plenty of people were about, including dog walkers, horse riders, United Utilities folk and of course me with a rucksack.

Like i said, i had not been here before so walking at a brisk 3 miles per hour was out, i wanted to investigate the nooks and crannies of this historical area and generally get to know it a bit better and take in the views.

There is quite a history of people and industry in this area dating back to pre-historic times. A Bronze age barrow has been recorded on Hades Hill. Settlements were recorded as far back as the 12th and 13th centuries in the files of Whalley Abbey but the ruins of buildings that can still be seen today date back from the 16th and 17th centuries up until more recent times.

During the 16th century demand for wool and coal was high in this area and new farms were prevalent on the moors. Unfortunately with the building of the reservoir in the early 20th century most of these farms were abandoned and derelict. Some of the farm date stones and mullion windows have been incorporated into the dam wall for posterity and add some character. 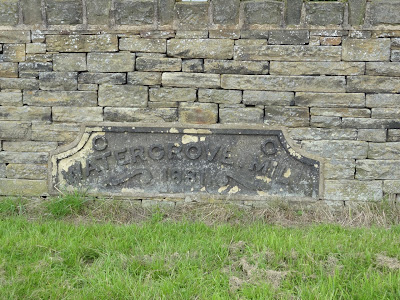 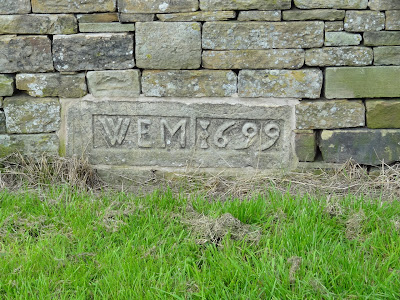 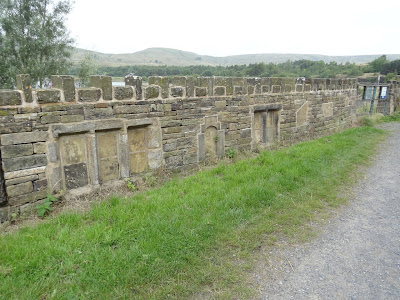 I believe the above 3 images that show date stones and other architecure were from the buildings that were flooded on construction of the reservoir.

The tops of the hills contain lots of Bell Pits. Hand dug holes and chambers where coal of pretty poor quality was excavated.

The late 18th century saw the building of 3 water powered mills. Watergrove, Alderbank and Roads which provided work for the locals until the 1920’s.

The reservoir itself was built during the Cotton Famine years of the 1930’s and employed many of the unemployed workers of the cotton industry.

My first “Top” was called “Rough Hill”at 435 metres and so i set off along the top of the dam and along the east side of the reservoir. Lots of trees had been planted along the route with name plates at their base. This was “A life for a life” memorial forest scheme. 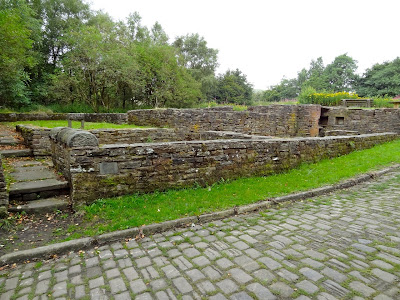 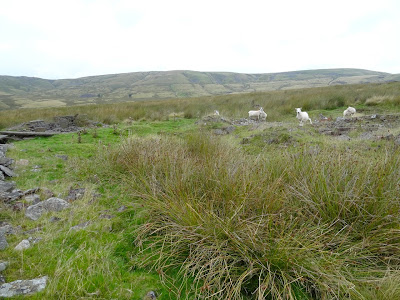 The day was quite overcast although humid. There was no breeze but ominous dark clouds swept by and i wondered if i might get the odd shower soon. I kept checking the map to make sure i was on the right path. Numerous paths interlace and i thought it could be easy to go wrong. I was on Ramsden road, a corbelled route not dissimilar to Rooley Moor rd i have posted about in the past. The route splits where the Long Causeway goes NE and a second route heads off in a NW direction for Higher Slack Brook. My track was a muddy one, heading N and skirts the east fringe of Rough Hill.

A mountain biker was heading towards me but not overly fast. The route was boggy in parts and quite slippery. I looked for the falls shown on the map but there was nothing much in the brook. i reached the next split in the path at a confluence of two streams. Both hardly flowing today. I stopped for five minutes to take in the scenery and could make out a large excavator across the fellside. Turbine i thought, but i don’t know if this is true or not. 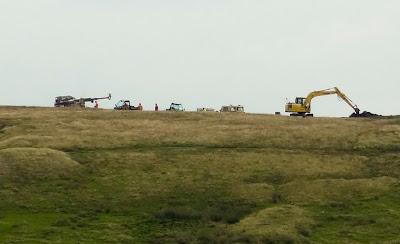 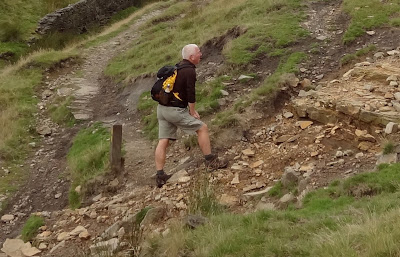 Start of the track around Rough Hill

I stayed on the path for some distance around Rough Hill until i hit a fence line. I was hoping to get a glimpse of Ramsden Clough Reservoir but it didn’t appear from my vantage point unfortunately.

I retraced my steps and headed for the top of Rough Hill. The excavator had chewed up lots of the land on its way across the moor and made deep boggy furrows in numerous places.

I took a few photo’s from Rough Hill and Hedes Hill as the sky was darkening and a stiff breeze was blowing from the west. 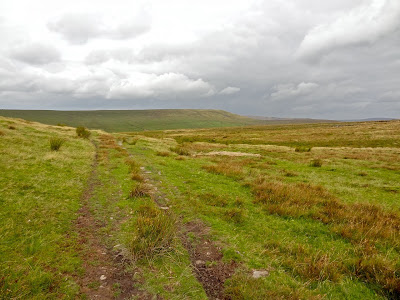 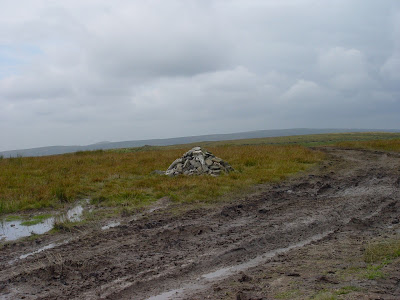 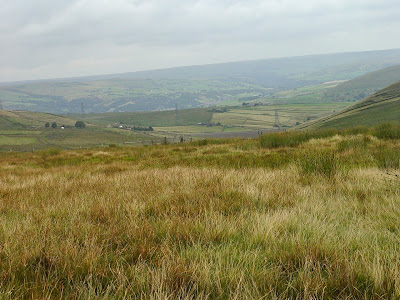 Looking at Ramsden Clough reservoir. I think i have just picked up the edge between the pylon on the right and the central one but the reservoir seems empty. This was taken from Hedes Hill. 433 metres.

From Hedes hill i could see the quarry at Whitworth and the scale of it. We used to test our machinery in the quarry here, in prototype stage of development. 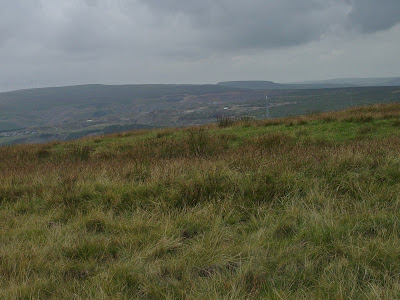 As i packed up the camera a chap approached from the direction i had climbed. It was the first person i had seen since leaving the reservoir circuit. Pleasantries given and away he went towards Middle Hill, my destination too. He seemed in a bit of a hurry, maybe it was the dark sky’s threatening. I stopped to look at the Bell pits and the stone quarrying and thought “What a mess”. I think stone is still being moved from these pits. 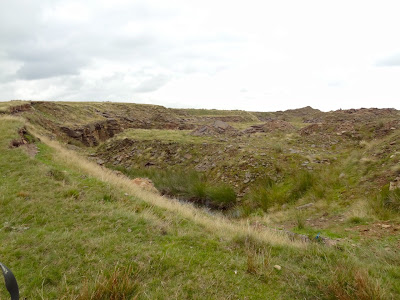 The quarried summit of Middle Hill. An Undulating mess at 400 metres.

Dropping down between Middle Hill and my next top, Brown Wardle Hill i sat down on a good piece of grass and had a bite to eat. I watched the chap i had seen earlier, picking his way across the moorland, then backtracking and starting off again. He seemed a little mislaid.

I looked for and found the boundary stone on Middle Hill with it’s “S” on one side and “H” on the other. 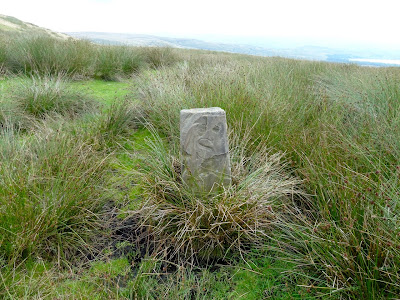 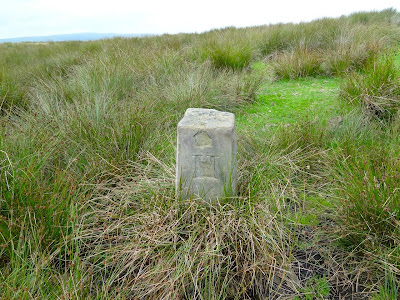 I wondered if it stood for Spotland and Huddersfield but i don’t know for sure. Anyone who may have the answer, by all means put me right.

The terrain between Middle Hill and Brown Wardle Hill is also pretty chewed up with quarry type tracks and it didn’t take long to reach the top. 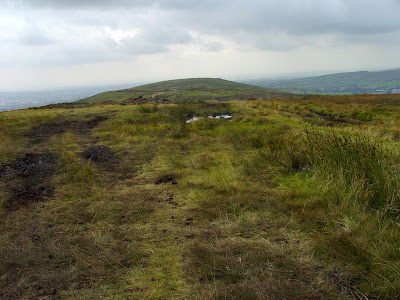 Heading over to Brown Wardle Hill at 400 metres.

I came off BWH to the east and dropped down to the bridleway. I came across the chap from earlier who i thought would have been long gone. He was backtracking again so i asked him if he was ok. He said he was and that the knees were not as young as they used to be. I noticed he had a map with him and the reservoir was in sight and therefore he couldn’t get lost, could he? 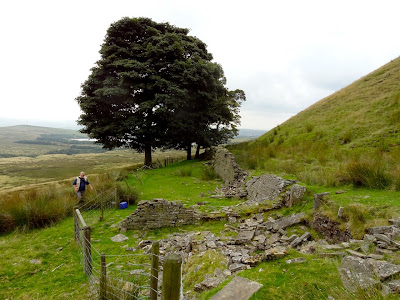 Am i heading South? No. Are you sure? Yes. Oh well.

We both headed off South and along the bridleway to the crossing point with Higher Slack Brook. I’m not sure which way he went but as i skirted the west bank of the reservoir he ended up behind me when he should have been far ahead because i stopped lots of times to take photo’s. 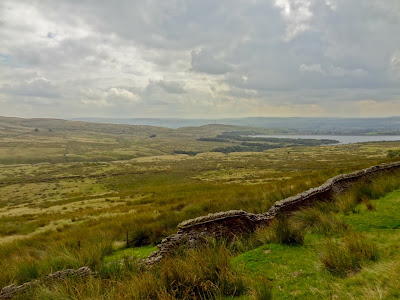 The track back to the car has been provided by United Utilities. The old paths now overgrown and quite difficult to pick out. Although the map shows lots of routes the Utilities one is so prominent that the others will/have disappeared which is a great shame. 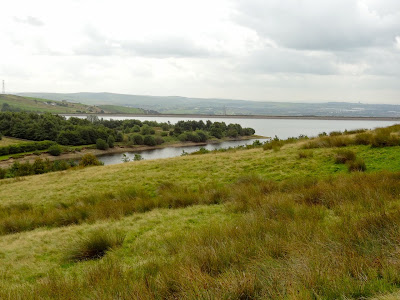 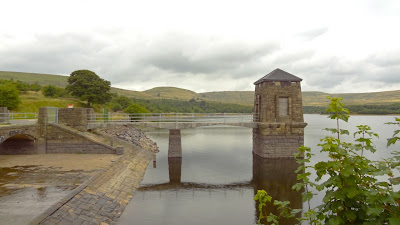 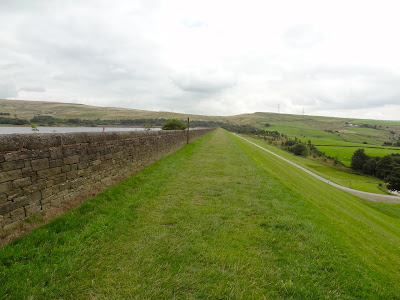 Considering this was my first time here, it opens up the moorland North across to Todmorden and i will be back to do more. A very nice walk. 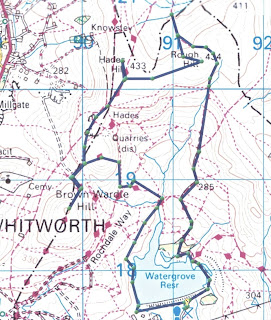 There you go Martin. The map, so that you won’t need a guide.

Looks like a a cracker of a walk - I find these industrial archeology walks fascinating.

We will have to do it sometime and maybe do an overnighter.

Looks good Alan. Sounds like that old geezer changed his mind as often as you change your font. Nice map, btw...- it'll be easy to follow your route. Or should we hire a guide? (Haha!)

Welcome back to the land of normality, whatever that is. I know some people (me included) just like to use streetmap to follow routes. Thats my excuse. I could do a map i suppose.
Re-my fonts, when in blog edit never click on the T with a red X under it. It causes chaos and had me starting all over again to re-align and re-font etc etc. Sorry.

The area is actually much more interesting than i have posted here. As i said in the post, this was my first visit and the surroundings new. Since reading more, it is going to be an area i will visit time and again.
Thanks for the comments re photo’s. Although the day was not good for photography, it was very grey, overcast and with poor light i did manage to pull some decent pictures through with the aid of iphoto.

An interesting walk. I've got a fantasy of that chap still wandering around on the hills. Perhaps next time you go he will appear as a ghost?

Hi Conrad,
He would be in good company. I think there are many ghosts in this area especially in the life for a life forest. I did see him when I got back to the car so he was OK.

Thanks for the map, Alan, do you keep it under a sun lamp? Probably quite easy to get lost, like that poor chap, but difficult to avoid a footpath for very long....

Sunbed removed. Hope it is now approved.
No, i think getting lost would be quite difficult.

I suppose that reservoir is a bit of a giveaway. But in winter, when it's covered with snow, in a white out on a foggy night?
Brrr

Especially if its pitch black and your snow blind.