Last week when i did my post on a walk around Watergrove tops i said i would come back and re-visit some of the places. I never expected it to be so soon though.
Sunday was a gorgeous day and too good to do jobs around the house. Sheila said she wouldn’t mind doing the Watergrove walk that i had done during the week and posted about. I thought, Bank Holiday weekend and its now 10.00am, it’s going to be rather busy, but we will go and see.
So it was a pleasant surprise to find the car park below the dam was only half full. A group of sponsored walkers were just about to set off which left only a few people around.
Seeing that i only did the walk during the week, i decided this time to vary it a little so that i could add a few more paths to my knowledge of the area.

Here’s the route we took, we started at the picnic sign below the reservoir dam and walked in an anticlockwise direction. It took us 3 hours but we were in no hurry and you could do it much quicker. 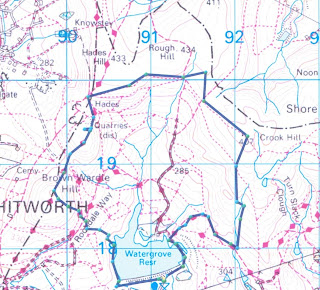 Following the dam wall round we passed the old mill reservoir on the right. A female Goldeneye duck and chick was spotted.
We left the reservoir track and headed off up the Pennine bridleway and through the Life for a Life forest. Sheila spent a few minutes reading the inscriptions on the trees. There are quite a few bench’s dedicated to peoples loved one’s and it’s a nice place to sit and watch the world go bye.
The track we were on was well made and i guess it was the original Watergrove mill workers route to and from the village of Shore. 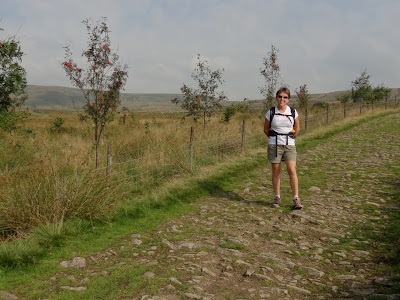 We went through a very well built wall and i expect this is the boundary wall of United Utilities. It encircles the reservoir at around the 300m contour. 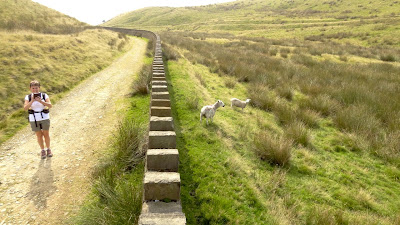 Through another gate the path heads south to Shore, passed a small unnamed reservoir. Here we left the track and followed the stream up Hills Clough. There were quite a few sheep tracks to follow which went in the right direction but no official footpath. At the top overlooking Turn Slack Dam is a well built shelter. It wasn’t marked on my OS map which i thought was a bit strange. 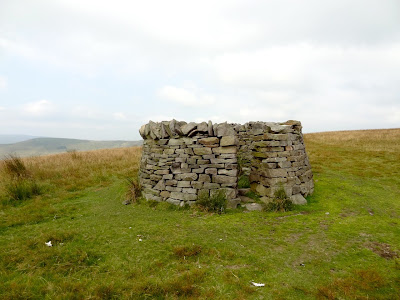 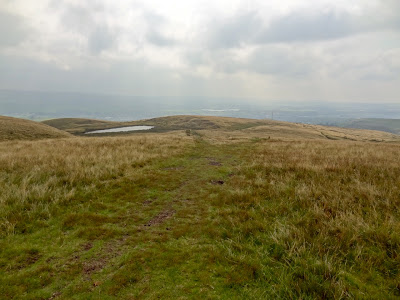 View south from the shelter
In the above photo the weather looks as though it is about to rain but it never did. In fact it got hotter reaching 23 degrees C.
There is a good path on Crook hill which heads NW towards the Long Causway. We took this and on the next hill was a drilling rig which i spotted the last time out and i thought then it might be a wind turbine being erected. Although it was off the path i had to go and get a closer look. It turned out to be a small drilling platform. Is there gold in these hills? 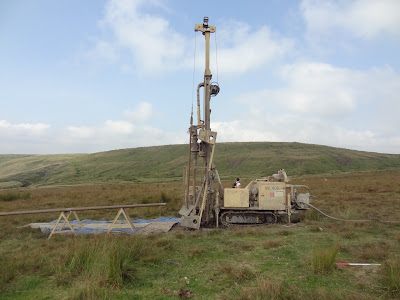 Gold prospecting? Ha
I decided not to go up to Rough Hill this time but to take the path on the south side that leads to the gap between Hades Hill and Middle Hill. Old workings abound here and the shales are extremely fine in thickness and very crumbly. It must have been quite hard to dig in this area. 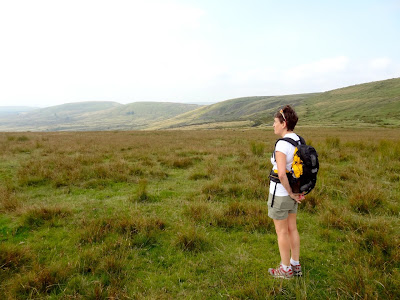 R-L Rough Hill, Middle Hill and Brown Wardle Hill.
A lone walker crossed our route, only the second person we had seen. The first being a fell runner just off Crook Hill. The sun was blazing and i cursed at not fetching my Tilley Hat or sun screen, i could feel my face burning. 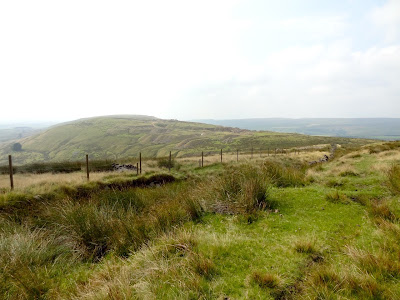 Path below Rough Hill
Once on Middle Hill we stopped for a brew. I had brought my home made stove with me to see how it performed in the real world rather than under ideal conditions in the kitchen.
It boiled 500ml of water in just under 8 minutes.
A welcome breeze had picked up which helped cool us down. It was precisely the right time too as it made the conditions for the stove more normal. 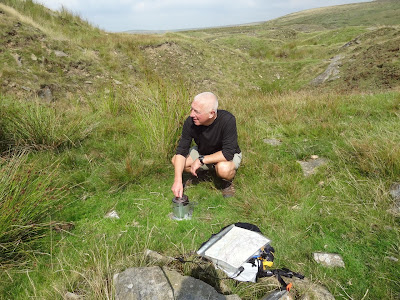 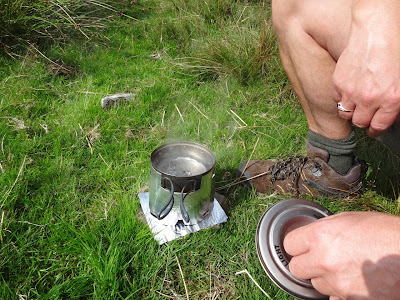 Brew stop on Middle Hill
It was really nice sat in the hollow on Middle Hill, a real sun trap today. We stayed for about 25 minutes before setting off for Brown Wardle Hill. Considering how close to civilisation we were at this point we still had the tops to ourselves and the views too.
As we approached the hill we had to go past a mother cow and calf and as we passed the calf let out a loud “Moo” at which point a Bull that had been lying down in the long grass got up and had a look what was going on. Sheila was away, half way up the hill before i had even got started. Fortunately it never came towards us. I think it was too hot to be bothered. 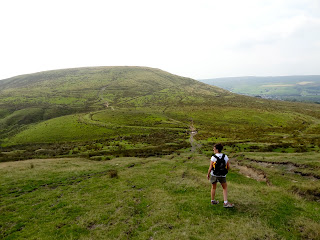 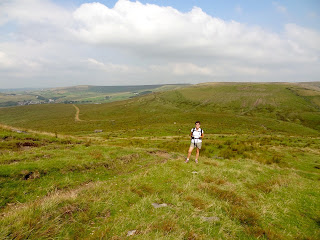 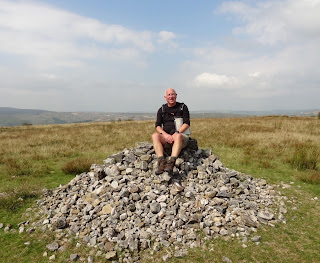 Pile of stones on BWH
From the top of BWH the path heads SW but i wanted to try and find some of the old pathways which were used by people 100 yrs ago and more, before the United Utilities path was made along the side of the reservoir. So we headed SE.
An old farmstead could be seen as we dropped down with the walls of a green lane running away from the ruins. We headed for this, crossing boggy land and came across a number of obvious pathways but many were impassable. Some even had decent kissing gates which proved that even in recent times they had been used frequently but now left to the hand of nature. 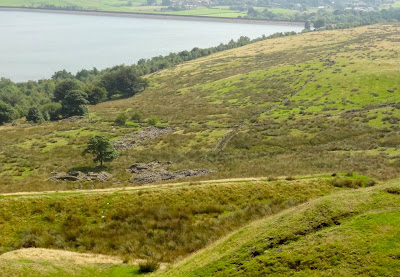 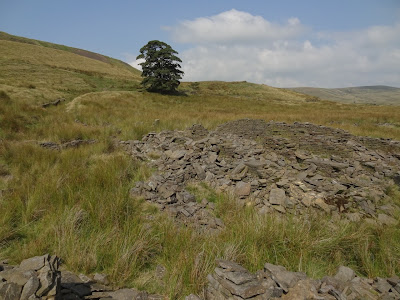 In amongst the old buildings 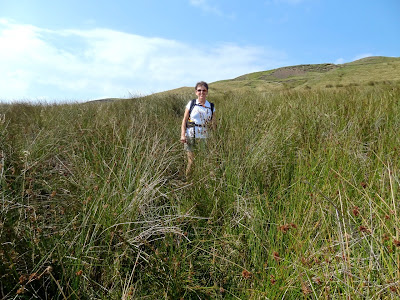 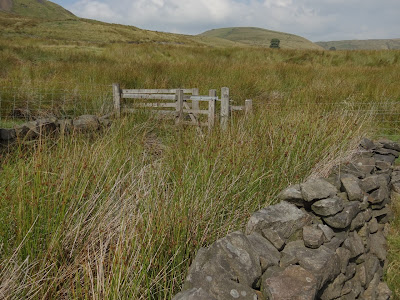 Exit of the green lane to open fell
We found it very interesting trying to work out what walls were from what type of building, House, barn, loo etc. And to walk on the old paths quite nostalgic. Getting out of the overgrown vegetation and back onto the reservoir path was interesting to say the least. Sheila was a bit worried about ticks but we encountered none. Just stinging nettles.
I must try and find out what the farm was called. Amended 28.08.13: I think it was Roads Farm) 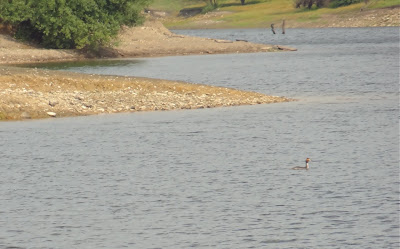 Along the reservoir we spotted a Great Crested Grebe.

Nice one Alan. That drilling rig looks a tad suspicious, not one of those frakking thingymajigs is it??

I wonder if that drilling rig thingy was some sort of ground surveying rig - checking for the suitability of planting wind turbines?
That's a nice route you did there. It always amazes me that there are such good walks on our own doorsteps. Nice one!
JJ

I don’t know Dawn but looking where it was i think JJ could be right in his comment below.

I am with you JJ. If it hadn’t been right on the ridge line i might have thought something different. So i suggest getting up there soon before turbine mayhem starts. The ground churned up by the large excavator will end up as the service road no doubt. What a thought.

Nice one Alan. I have 'plan a Watergrove Walk' on my ToDo list. Shame you had to use your map as a sunhat!

Make it soon Martin and you can borrow my hat.

There is a wind farm being built, http://idontdohills.blogspot.co.uk/2013/09/26-crook-hill-to-brown-wardle.html

The tracks are quite deep, probably from that rig.

A lovely walk... The road on Rough Hill is quite extensive now, very large and wide with diggers working daily. At the moment it looks a mess.

Such a shame, Anonymous. You could put your first name after the comment if you wish. It just works better i believe. Thanks.

Yes, thanks. I have seen it.