Todays walk was another in our Curry walk series which finds routes into the centre of Manchester from anywhere within a radius of around 15Km from said Curry House.
This walk starts in Prestwich (No not the Hospital) and finishes at “This and That” delicious food emporium in Shudehill.

I was outside a supermarket  at 10.15am waiting for the others to arrive from Timperley on the tram.
I had a call from JJ at 10.36 to say they had alighted. I was surprised to see 3 souls marching my way as i had only expected JJ and Rick. The third was John, a motorbike enthusiast and occasional walker of nothing serious.

11.00am we were on our way, in a different direction to what i had envisaged. I thought we would head through Phillips Park to meet the River Irwell, which is quite a direct route but that wasn’t to be. Rick wanted to go past the old church in Prestwich Village.

The church is next to The Church Inn, well it would be wouldn’t it. But it was still closed thankfully or else this walk may not have taken place. The Church of St Mary the Virgin (and the Church Inn) is well known to Sheila and I as she used to live in Prestwich.

The church itself can be seen on numerous episodes of Coronation St as St. Thomas’s Wetherfield and is a lovely spot and well looked after. 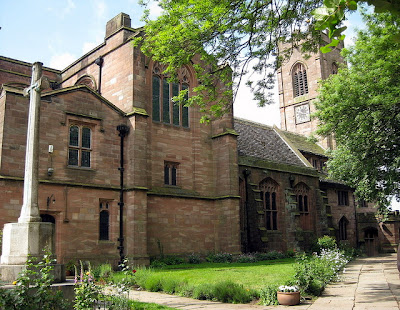 The Church of St. Mary the Virgin at Prestwich.
Records show a church was on this site in 1200 but the current building dates from 1500 − 1600 with numerous additions since.
The cemetery is particularly unusual as it is in a wood rather than a designed plot within the church walls. 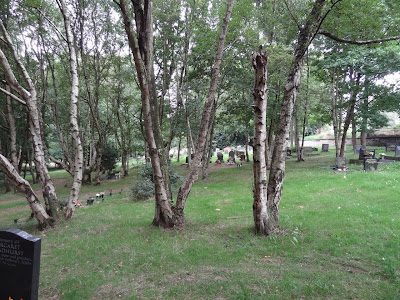 Our path led through the wood and along the clough. Here we came across numerous stone and corbled paths which scream of Victorian days. Although maintenance of these routes has long since finished they still hold a charm to see.
Our route was quite delightful passing under tall trees with the sunlight forcing a path through. 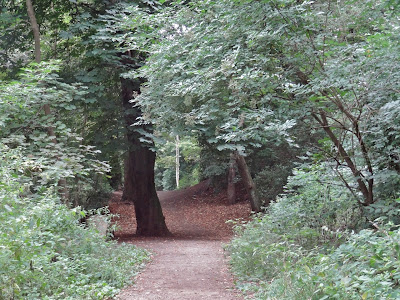 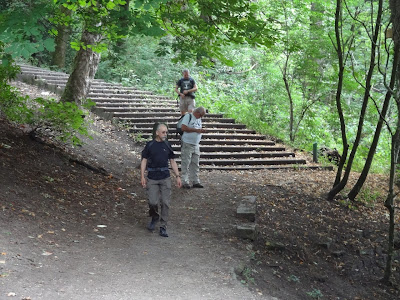 Victoriana along the clough with Rick, John and JJ faffing at the back.

Heading further along, the tracks became very numerous as this is a recreational area for the locals. We got a bit confused as to which path was which and the signposts didn’t always help. The Irwell Sculptured way was the prevalent one and so we tried our best to keep with it. Eventually and probably the hard way we came to a bridge spanning the Irwell.
It was quite a while ago that i last walked bits of the Irwell and i remember it wasn’t a pleasant experience. But today it is completely different. The river is actually quite nice and numerous fish were spotted from the bridge and it was noticeably clean. 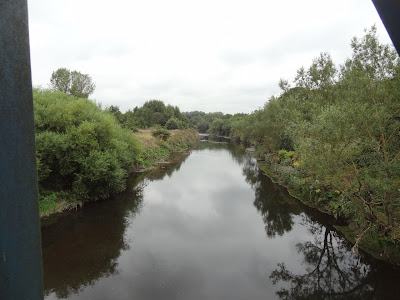 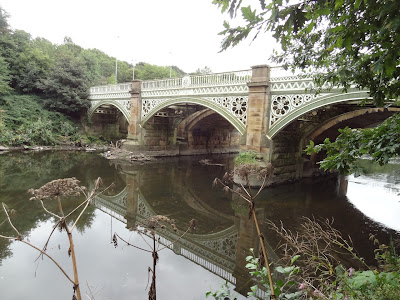 The Aqueduct over the Irwell with the A6044 at Agecroft. It was built by Manchester Corporation Waterworks in 1892 and has 2 large bore pipes running along it. Thirlmere water pipes. The architecture is very pleasing unlike the new road bridge which sits side by side to this one.

Once across the busy road the stretch of footpath passes alongside Agecroft cemetery. A huge place. The views are quite expansive and surprisingly green considering. 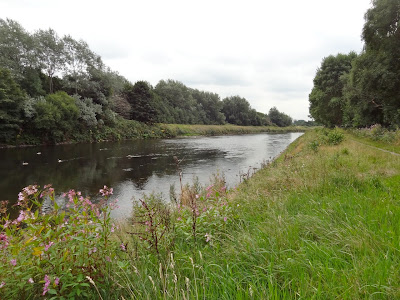 Lots of birdlife was encountered on route. And a heronry also. Once we had left the cemetery behind we checked the map. (Just an excuse really to let JJ and John catch up). it was decided to cross the first bridge which leads past the lush Littleton Rd sports ground which is part of Salford Sports City and into Lower Kersal. Walking around this part of Salford i think every house has a dog which barked at us as we passed.
Once back onto the river we stopped for 5 minutes for a piece of Sheila’s fine baking and then it was over another footbridge leading towards Higher and Lower Broughton. 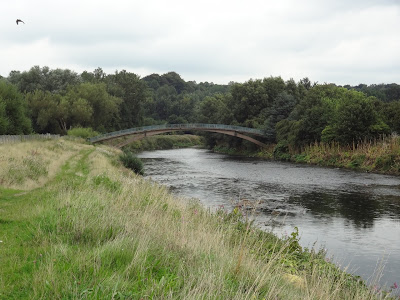 Footbridge at Lower Kersal leading into the woods.
Manchester skyline was now clear and we could pick out the high tops of the CIS, Beetham Tower and Strangeways Prison.
We had been in such a green corridor for so long that it seemed quite strange when we emerged onto Cromwell Rd. A tremendous amount of work is being done here to improve flood defences. 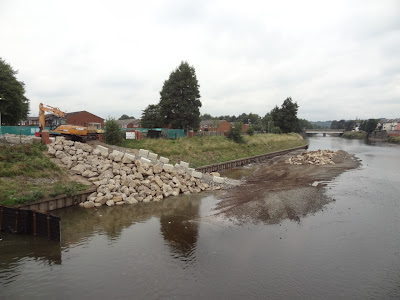 Just one bit of the flood defences being put in all along the river here. Cromwell Rd bridge in the background built in 1882.

Our route on this bank was blocked due to the works so we had to cross over to St Boniface Rd where we picked up the path along the opposite bank passing Fredrick Rd bridge. Here we cut a corner and headed towards Blackfriers and passing the lovely old white building which is part of the Salford University Campus. There used to be a large reservoir here before the current building was erected in 1915 and was used to make a number of products like shampoo’s for example. It’s history can be found HERE.
Our stomachs were rumbling and time was getting on. It was 1.30pm and we had the idea that the Curry house would shut at 2.00pm. John was struggling a bit with walking so we waited for him to catch up.
We stopped to admire the Post Office old Sorting office building which thankfully has been restored into flats and car parking. It would have been a disgrace to knock this gem down. 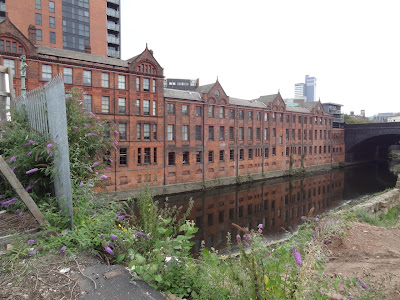 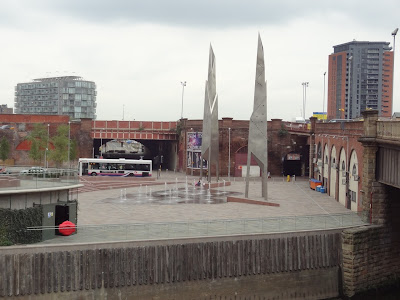 The new sculpture’s in what was Victoria Bus Station. 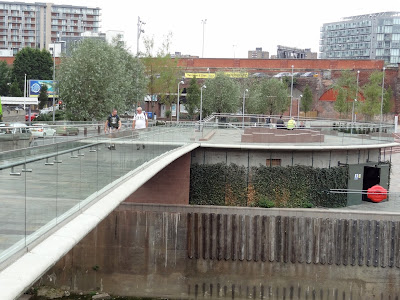 The New Bridge over the Irwell at Victoria.

Rick and I had quite a march on now as we left Victoria and between Manchester Cathedral and The Mitre. We passed Urbis in a flash and into the grotty Printworks we sped. Once out of the gloom we waited for JJ and John to show and then we could smell that curry. A tram just missed us as we took a few short cuts to get to our lunch. We ordered and sat down to eat and still no sign of JJ and John.
How can we lose somebody who knows Manchester and within a hundred yards of our destination is unreal. Anyway they turned up from a completely different direction and 5 minutes later. Where they had been we didn’t ask.

We had a wonderful curry as usual and it wasn’t until we had finished that we realised nobody had taken a photo of our food. I think JJ got one of 4 empty plates. Ha.
Then we marched off to sample some splendid real ale in the Ape and Apple. Now completely refurbished. What a splendid day out.

The walk was 13.3km.
Some more images are available HERE. 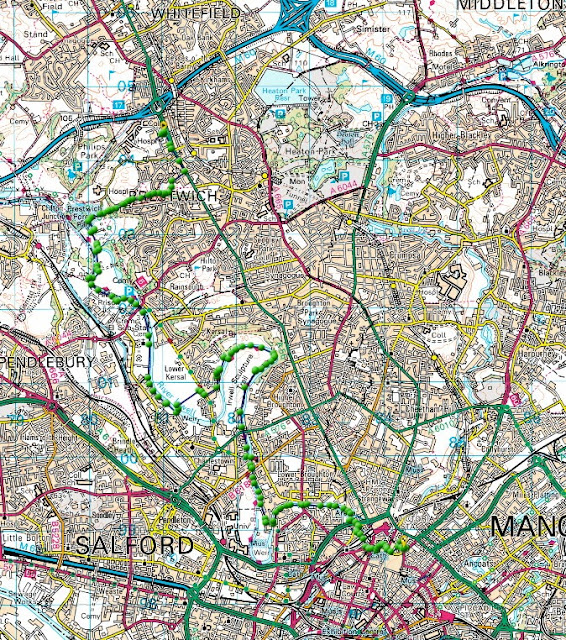 Some nice walking there Alan.That cemetry in the wood is different, I rather like it.

It was a very pleasant bimble Dawn with a nice reward at the end. Hic!
The photo i took in the cemetery doesn't do it justice really.

Difficult to believe that is all so close to the centre of Manchester. The full screen slideshow is great.

Thanks Conrad. I had to pinch myself a few times too. It is difficult to believe as you say. And especially seeing large numbers of fish in the Irwell. Tremendous.