Gleann Beag and the Brochs.

With a 3 course breakfast under or should i say over our belts we chatted with Maggie about what we were doing today (Saturday). We wanted to visit the 3 Brocks which are located down Gleann Beag and then rise to the bealach and hopefully get a view down towards Loch Hourn.

The day was really miserable weather. It had rained heavy all night and hammered on the roof light to the point of distraction for Sheila whereas i didn't hear a thing.
Maggie said we will be back by 7pm or she will send out a rescue party. We made a flask of coffee, donned full wet gear and set off south along the bay.

Only 5 minutes had passed before we realised we had forgotten to make a reservation for evening meal in the pub, so had to retrace our steps and head into the village. The pub was closed obviously, but the chef was busy, cheffing i expect, and took our requirements down for Saturday and Sunday nights meals.
Because of the weather we had decided to stay a couple of more nights in the B and B instead of camping.

So back south we went. Passing motorists gave us that smile, you know the one where the smile means "Look at them daft beggars out in this weather". Or words to that effect.

We spotted an Otter not far off shore and watched it until it dived, Oyster Catchers were noisy and followed us down the bay.

Reaching the bridge over the Abhainn a Glinne Bhig near Eilanreach we paused and watched the river. Fast flowing, white water, high and noisy. Scary even. The sign at the bridge said cafe at Corran open except for Saturdays. Glad we had visited yesterday.

Its a good single track road down Gleann Beag, for a couple of miles anyway. Just the odd one or two cars passed us throwing up plumes of water as they went.
Water falls were everywhere but in the distance we could hear the sound of a big one. It eventually came into view across the glen. It was Eas Mor Chul an Duin in spate. It's a big fall although because of the trees the views are limited. If this was in the Lake District it would be crowded with a car park. 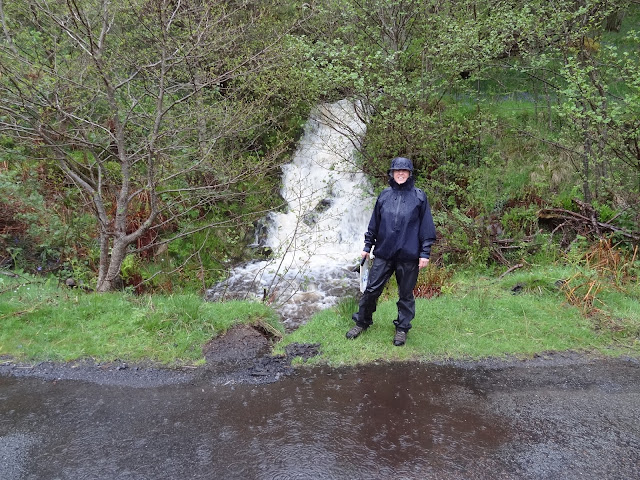 A road side stream. 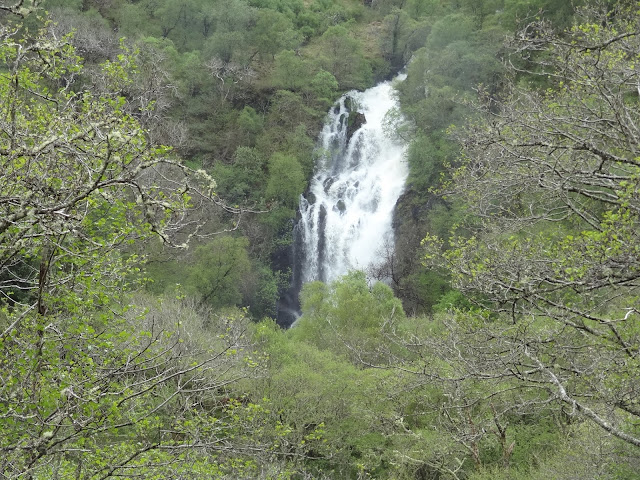 Eas Mor Chul an Duin, taken on zoom across the glen.
The first Broch we came to was Dun Telve which is in decent condition considering the many years of robbing stones for field walls and homes. 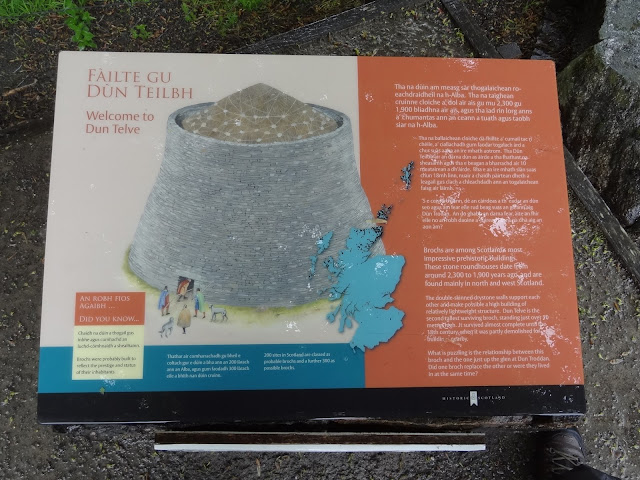 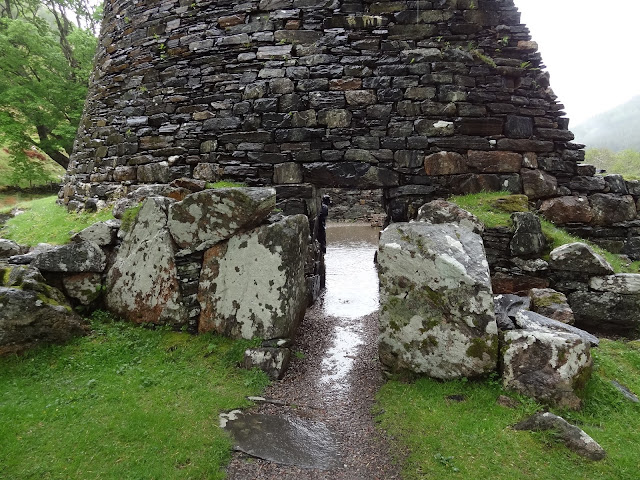 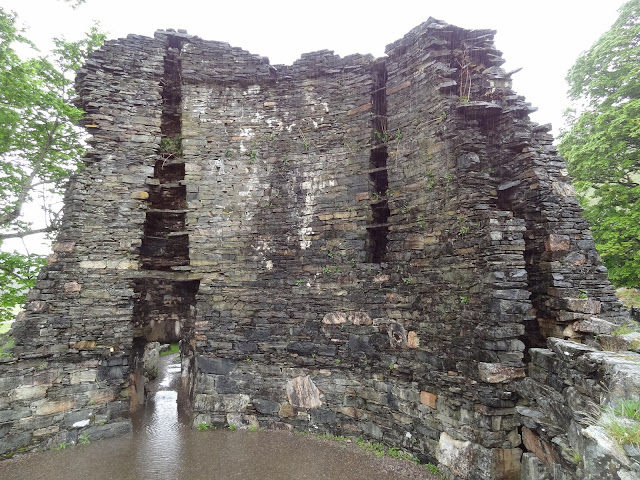 The Brochs here at Corrary are the best Brocks on the Scottish mainland. The Iron Age structures are fortified homesteads built between the 4th century BC and the 1st century AD.This wall still rises 7 metres. The original entrance can be clearly seen and it is still possible to walk between the inner and outer walls, again clearly seen because of the robbing out.
This broch and the next one at Dun Trodden were excavated in 1914 and 1922, the serious plundering of the stone was done in 1722 when the Barracks were built at Bernera. We will visit that later.

Dun Trodden (image below) was built on a slightly higher position. 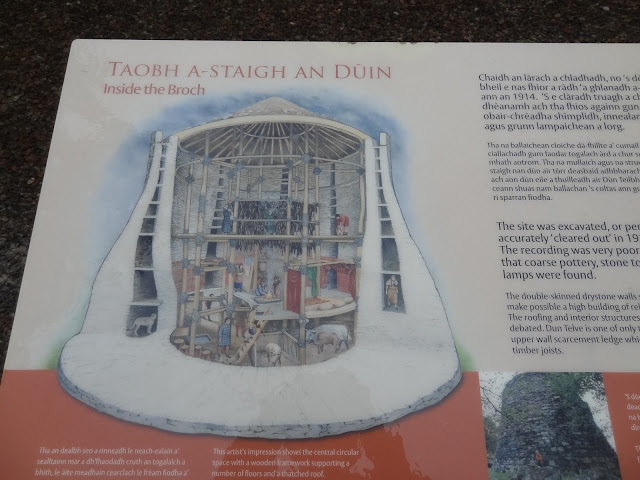 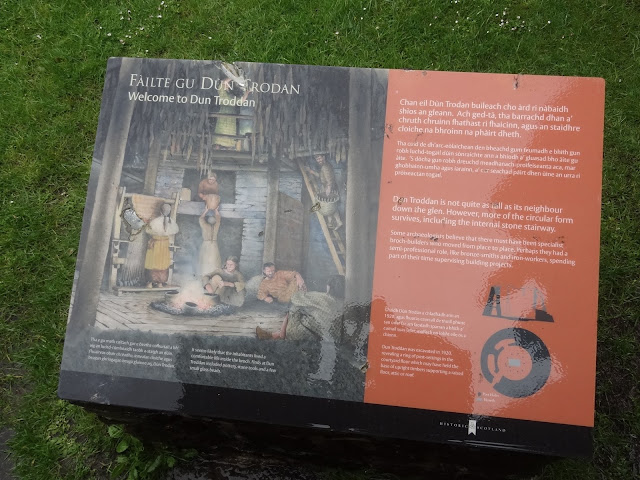 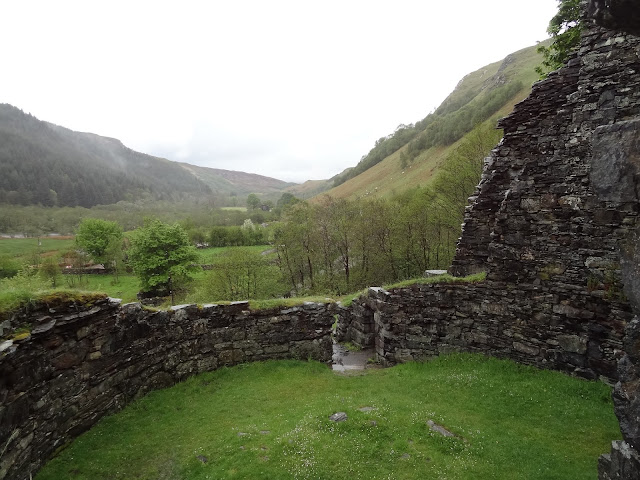 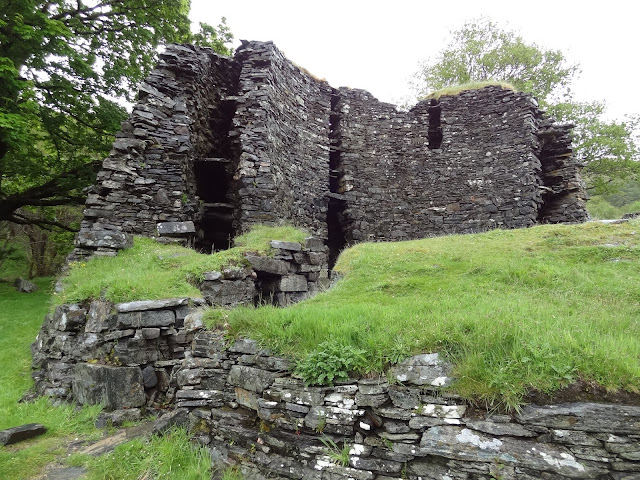 Both of these brochs commanded great views both up and down the glen. The inner passageways are easier to see on the shot above but again lots of the stone has been robbed out.
Just as we were leaving we had a short break from the rain and as luck has it there was a sign for a cafe. We couldn't find it and then a car pulled up so we asked. It was just our bad luck that the people who used to run the cafe here are now the proprietors of the Glenelg Community Hall cafe and so this one has now closed. Shame really as it is in a nice spot for TGO Challengers to take 5 minutes.

Carrying on down the glen we passed the chambered cairn and then suddenly we came to a large bridge across a river with a house to our left. I checked the map and was a bit in a quandary as no large bridge across the river was marked on the map and we were not meant to cross it. As it happened we were at NG843166 and because the side stream was in high spate i had mistaken it for the main river.
Once across the bridge it was an obvious track up to Balvraid and then another Km or so up to the 3rd broch Dun Grugaig.
Dun Grugaig is built on much more rugged landscape and is D shaped rather the circular.Some experts think it may be a prototype broch or semi broch. I just think they built it taking into account the rough ground they were building on.
A survey was carried out in the 1700's but so far it has not been excavated. 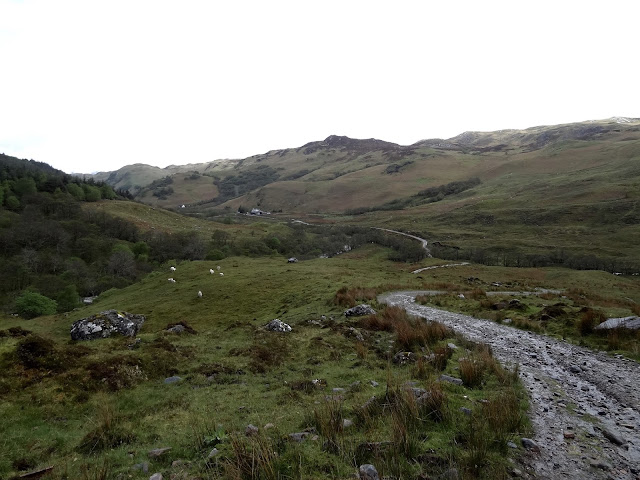 The view back down Gleann Beag from Dun Grugaig. 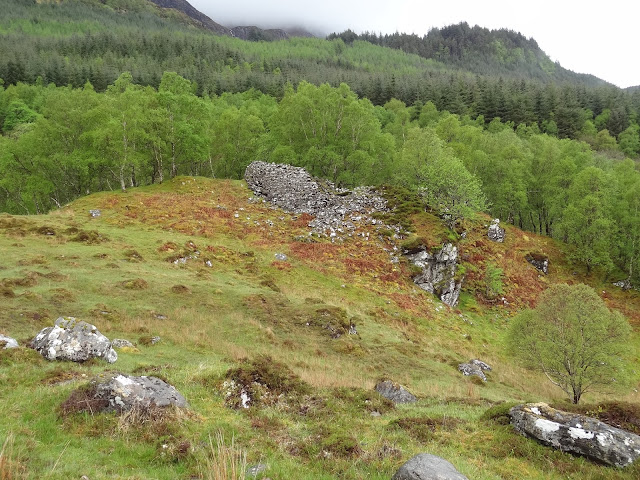 What's left of Dun Grugaig.
We had planned to go up to the Bealach but it was raining and low cloud was covering it so decided it wouldn't be worth the effort as a view down Loch Hourn would not be visible.
We had coffee and lunch as it was now 2.00pm and retraced our route back to the coast. 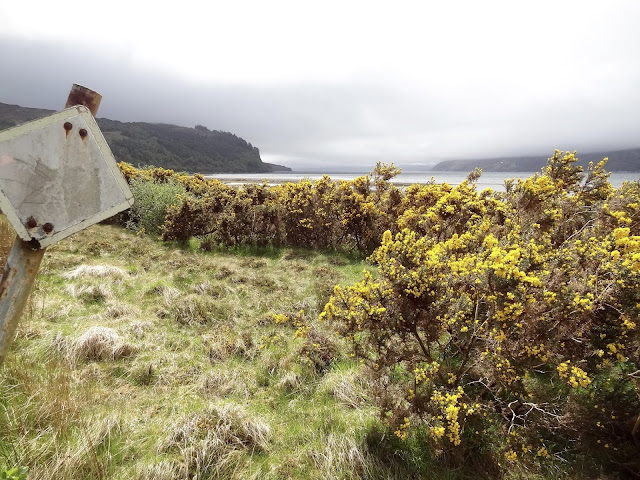 View down the sound from Eilanreach.
14km total.
Posted by AlanR at 11:26 AM

A lovely area despite the rain, brilliant photos too.

Yes. It will be great to go back one day.