From anywhere in Braemar you can see the impressive hill of Creag Choinnich that is located just to the east of the village .
It's not a long walk so we didn't rush get going. We had a wonder around the village where there was an outdoor gear market sale on. We didn't buy anything.
Then the usual tourist bits, the information centre, the art gallery, The Old Bakery and the Co-op for supplies.
Many large motor bikes had descended on Braemar and i mean many. So it took some time to get away with so much engineering around.

Eventually we did get going, passed the chippy and the house with the old railway signs, past the fire station and into the woods. There are numerous paths and not wanting to do the direct short route we picked a path that skirted the perimeter and heading east. It was a good path but eventually became more of an animal track. It was heading up rather than down and so followed it.
More off shoots of the path caused some head scratching but we decided that as long as the paths are going up eventually we will reach the top. That is exactly what happened and to be honest the views we got down to Invercauld bridge and across Glen Callater were wonderful.
Through a bit of a boggy mire brought us to the top and it was well worth the effort.
The day was perfect weather, no breeze, clear tops, the kind of day you wished you had done something higher. However we were where we were so we sat down and enjoyed the scenery for about 1 hr including a late lunch.

The downward path was quite steep in parts and harder than the path we had taken to the top. A number of people were sweating cobs as we passed them going the opposite direction. Is the bar open at the top we were asked. Of course was the reply. 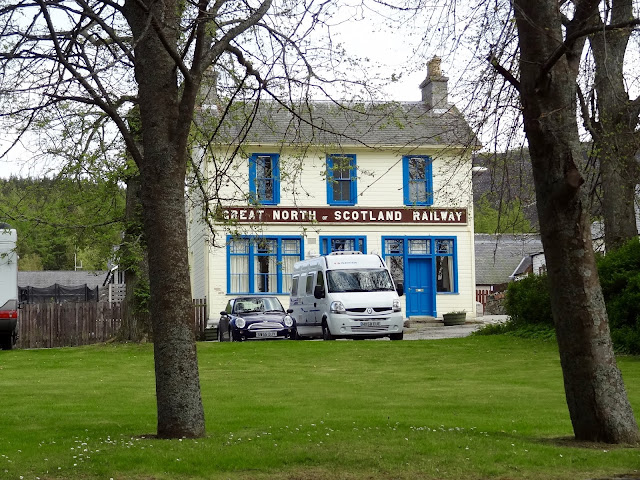 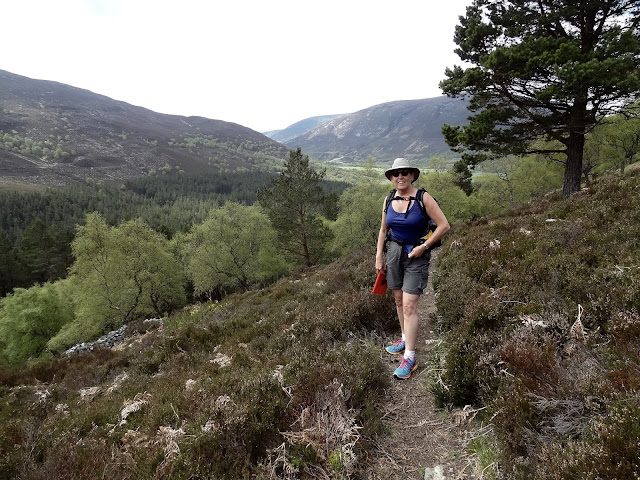 Looking back to Glen Callater 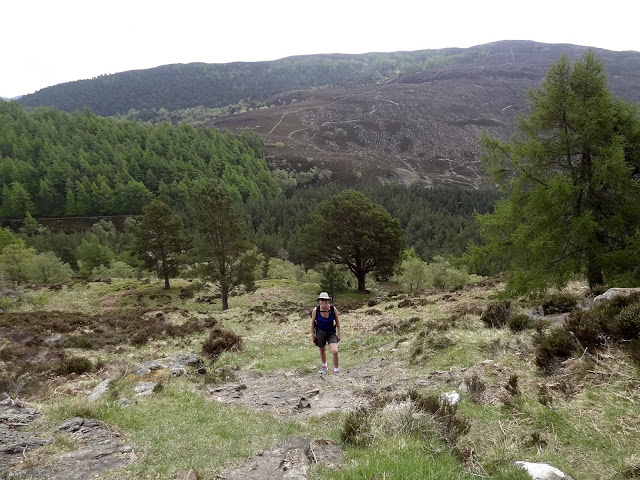 Looking over towards the Lion's Head. 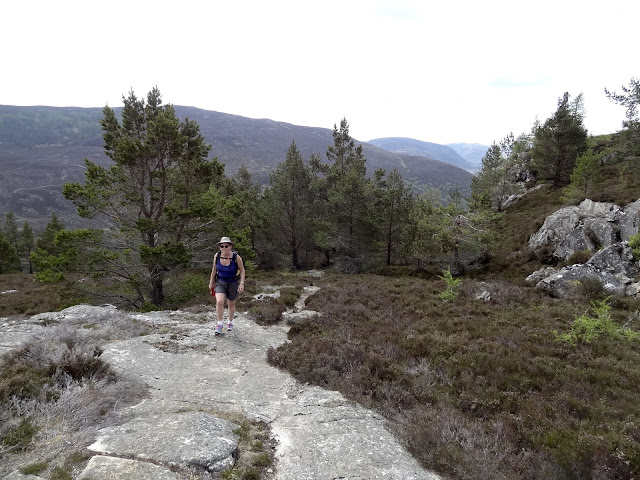 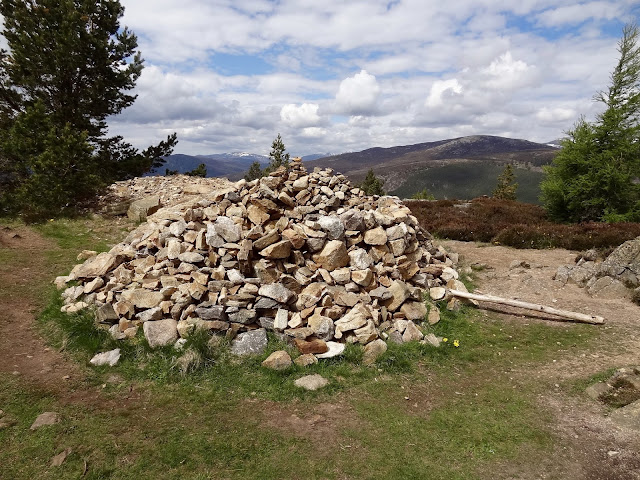 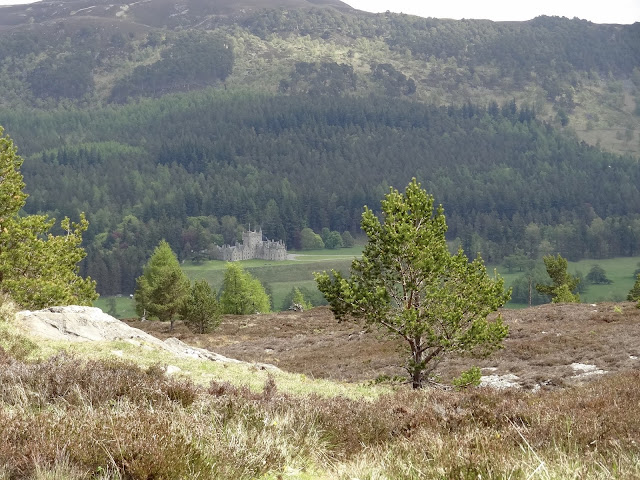 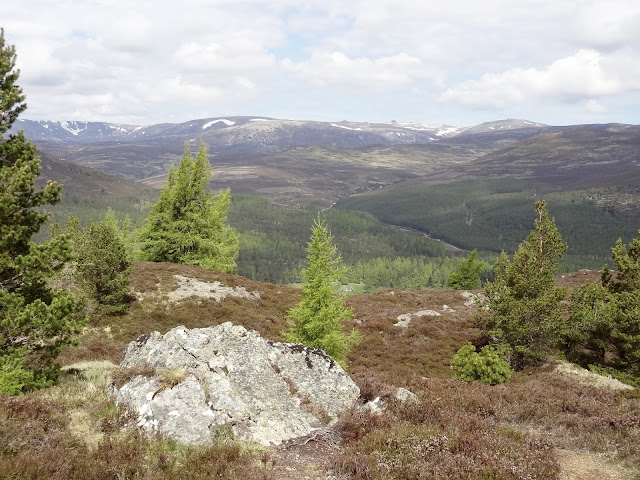 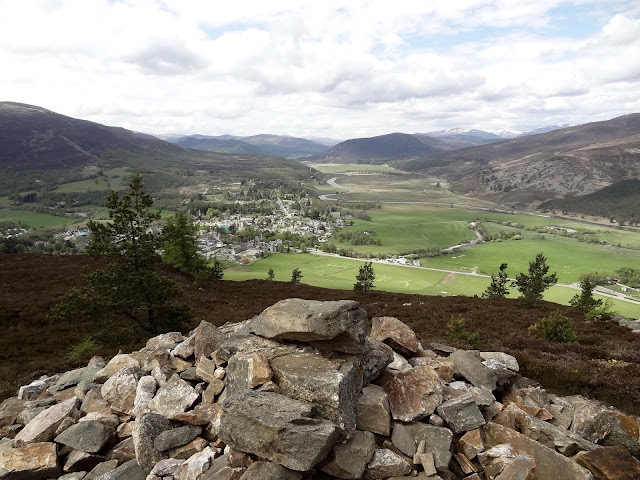 Braemar and the upper Dee 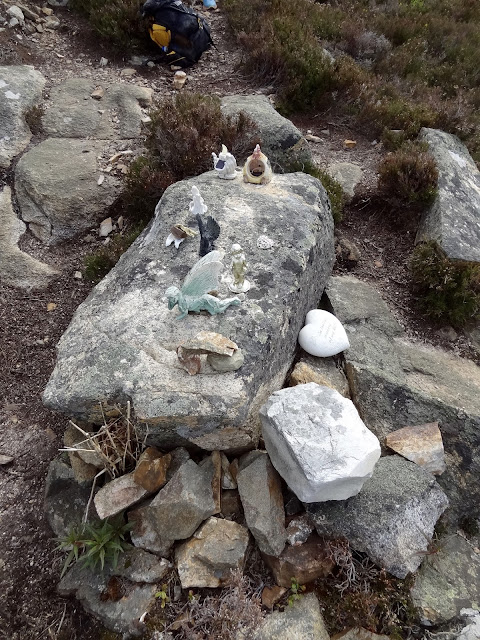 Trinkets at the top. 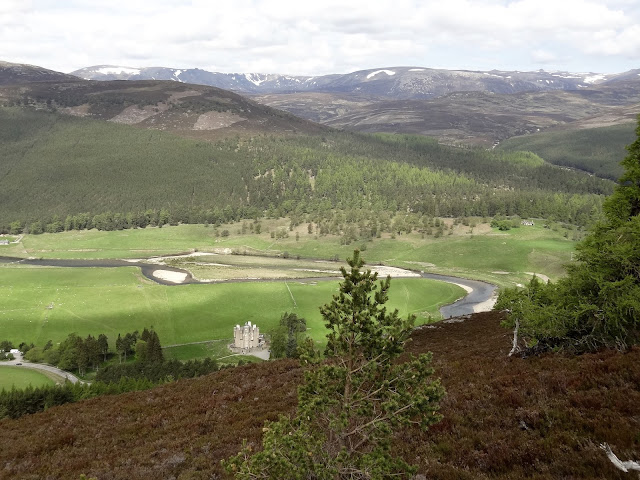 At the campsite you wouldn't believe where a couple had put their tent. The camping area has 2 fields, 4 small tents shared this expanse. They had put a large tent up with the guy lines going straight in front of our tent door. I don't mean 6ft away i mean 1ft away. The Germans were sat around a picnic table about 30ft away and they just shook there heads and raised there arms as though to say "we know". What kind of people do this, why do they think it's ok?What do they have between their ears.
Because our tent is freestanding, the removal of 4 pegs was all that was required to move it 15ft away. It wasn't far enough, when the couple came back from the shops they started on the booze and got louder and louder, in Scottish accents, (not that i mind Scottish Accents) until as dusk arrived i had had enough and moved the tent another 30ft away so we could barely hear there stories of woe. 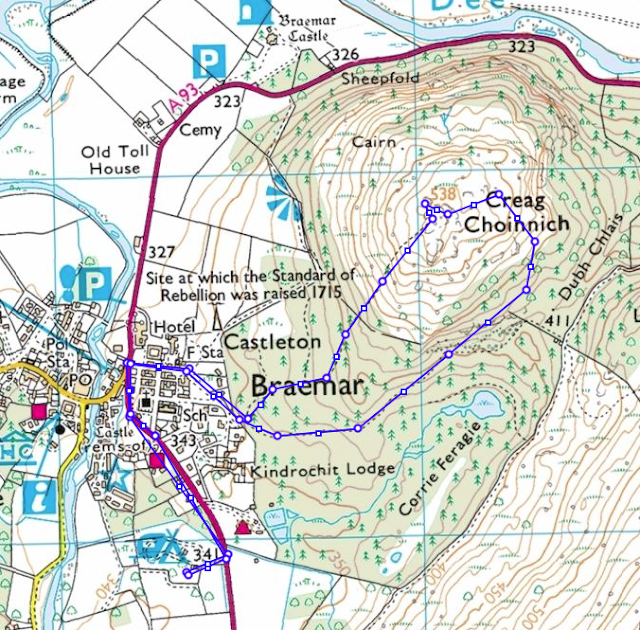 It certainly is a lovely area. Those trinkets on that slab look like some form of Pagan offering?

Oh dear, i must go and take them back. (joking, honest).

Thats a great wee hill, Alan. I must climb it next time I'm in Braemar.

Easy, but if the weather is clear it is a trip up.

We've had so many incidents of someone pitching on top of us in an otherwise empty field (on one occasion fabric-to-fabric). My theory is that in deciding where to pitch the thinking is "Well if there's someone pitched there, it must be a good spot."

I dare not print what I really think Gayle.

Have just caught up! Your trip looks good even though it came to an abrupt end. Did you get into a fight with the noisy couple?
Creag Choinnich is indeed a nice hill - always on my Challenge route towards Balmoral.