Recycle and save money.

I was clearing away rubbish to the recycling bins when i realised the foil bag was still in an empty wine box.
So when i separated the box and discarded it, i found not a foil bag but a polythene type bag similar to dedicated water carriers.
It had me thinking i could use it for backpacking and save a little cash.

The tap came out from the bag quite easily and my first thoughts were, how do i get rid of the smell of the white wine.
I filled a basin with boiling water and soaked the bag and tap until the water was cold. Most of the smell had gone but not enough.
I then soaked them again in sterilising solution for 4 hours and it was good enough.

I filled up the bag with around 2.5 litres of water, replaced the tap and threw it around a bit to see if it would burst. It stayed intact.

I braided a lanyard, making a loop in the centre and glued it around the outside of the seam on 2 sides so that i would be able to hang it when in use and also strengthened the corner with duct tape where the strain would be taken. 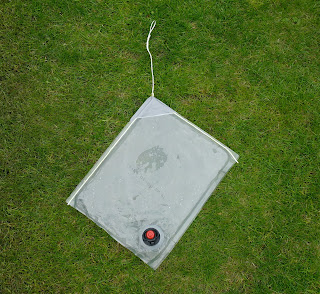 On completion the carrier weighs 40 grams. 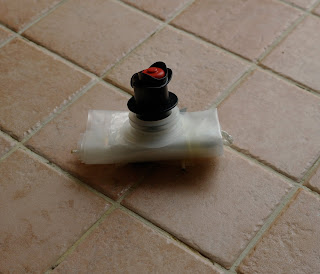 When rolled up the carrier takes up very little space. This is a 3 litre bag and it takes up about the same space as my 1 litre Platypus.
I suggest that when the tap is pushed back into the bag, only go about 3/4 of the way in. It's still secure and watertight, but it makes it easy to remove to fill it up. 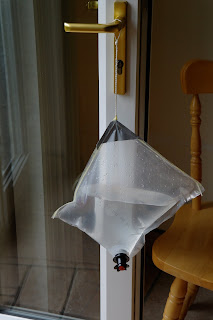 The above photo shows the bag filled with 2 litres of water. I didn't want to put 3 litres in at this time because the lanyard had only been glued for about 1 hour.
I think if i did need to put 3 litres in, i would probably leave it on the ground anyway.

All in all i think it's a good bit of recycling. If anybody wants to me to make them one please send a new box of wine to me at........... only kidding.

And if it bursts at anytime just think of the pleasure you can have in emptying another box.
Posted by AlanR at 5:41 PM

NIce job, it's always good to see something like that and there's always a feeling of satisfaction when you make something.

MacE
Thanks, I am always looking for thing to make from the most mundane of items. Some work, so don't. This one did.

Gibson.
Thanks again,
Simple to do, once it was washed out it was only 30 mins to complete. The thing is, it's so light for the volume and costs nothing.

Excellent! I didn't drink much wine before, but I think I'll start now. Thanks for the idea!

Phil,
I think a 2L basic Platy costs about £10 whereas a 3L wine box costs around £13-15.
You can have a few good nights and still end up with a water carrier for free. It makes sense.
ps I think i sent off a patent pending but i can't remember. Oh well. Lol