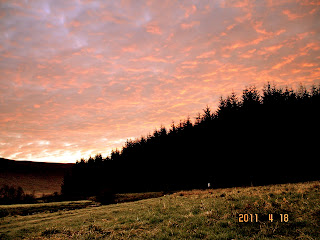 I heard the wake up call as the lady started her car and drove away.
I stuck my head out from under the condensation and looked upon a beautiful red morning.
This is supposed to be bad news for shepherds, i hoped it was good news for us.
It was 6.15am or thereabouts and getting up had to be done.

Others were starting to stir and i could see the steam from Laura’s boiling water rising over her MSR Hubba tent.

Before packing up the tent i gave it a good wipe down to remove as much condensation as possible. It always amazes me how much water a J cloth will soak up.

Away we went at roughly 7.30 am following the SUW. 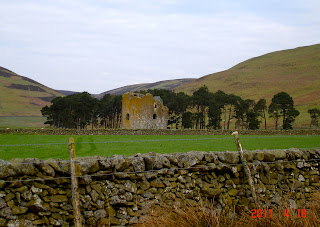 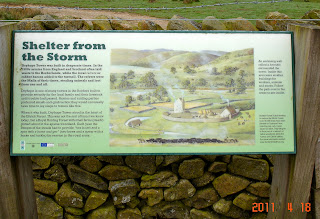 Tower info board.
Another lovely day, calm and what cloud there was, high and scattered.
The rise was so far gentle and easy walking although a field full of inquisitive young bulls had Laura a little ponderous. Fortunately the path skirted round them.
Along the path to the bridge over Hawkshaw Cleuch we heard Curlew, Snipe and Oyster catchers and occasionally caught a glimpse.
Crossing the Douglas burn the advance party was heading up the SUW but Mike with the map put the reins on and we headed past the old Blackhouse Tower and farm buildings towards the forestry. 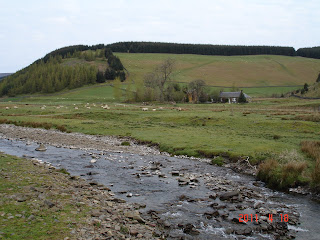 Blackhouse farm with old tower
Once we hit the forestry path Mike announced that this was were it all goes wrong.
Forestry are notorious at moving footpaths and planting new trees across them or chopping down lumber without re-instating the paths.
It did happen. Mike said we take the 2nd path left. We did. Mike said this is wrong. It was!
We backtracked and took the first which was the original second if you get the drift of all this.
Onward and upward through boggy ground and high tussocks until we came out into the open at Whiteknowe head. Hooray.
The fence line was in front of us and the path crossed the fence 1/2 mile ahead. It was the longest, boggiest 1/2 mile i have done for a while and it took an age. Many times i thought i was going to disappear into the morass of peat. 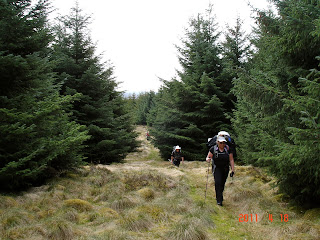 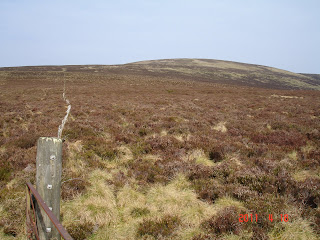 We did a slight detour having achieved the fence line crossing point but quickly picked up the track contouring south of Stake Law. It was good to find running clear streams all along here.
Gaining the ridge, the decision was taken to head down into Glen Sax avoiding the ascent to Birkscairn Hill and into Peebles along the old drove road.
This was taken in light of the pending bus departure. As it turned out the descent was quite arduous and it may have been quicker to use the drove road. 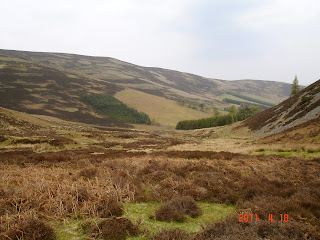 On the way down to Glen Sax
Lunch was had when we crossed over the Glensax burn and the path down through the estate was easy but hard on the feet with the small sharp stones. 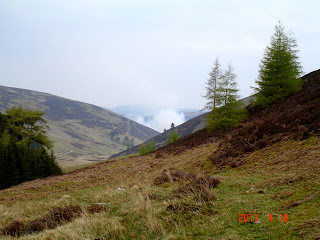 Smoke in the valley. Had Mike left the car running in Peebles?
The smoke turned out to be the burning of mass coppicing. Hope this isn’t bad news. Are things starting to turn we wondered. 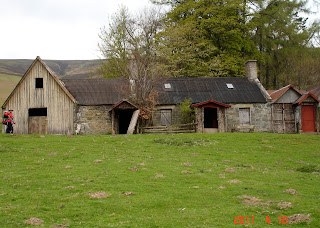 The bothy in Glensax, locked and not part of the MBA. 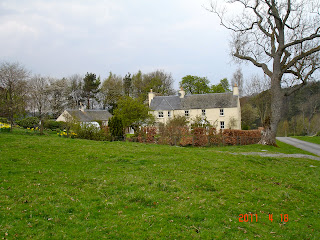 The start of civilisation, on the large Haystoun Estate said you are now in Peebles. A nice walk through the estate grounds brings you to the main road and the car park in centre of the town.
We were 1/2 hour early for the bus connection and time to get a coffee before our goodbye’s to Laura and Louise and our drive back to Moffat. 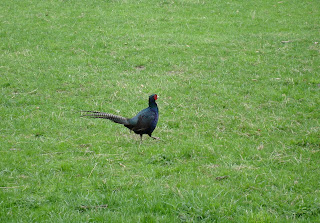 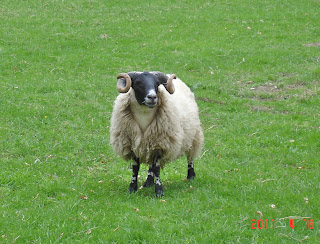 A couple of critters along the estate path. I didn’t get a photo of Laura with the cows!
This leg was 12.5 miles and 1635ft of up’s although the downs were definitely harder than the up’s in this case.
I had been a wonderful trip. Thanks for the laughs, the company and everything else.
The photo’s of the 3 days can be found here.
The maps of the trip are on Mikes blog which is here
Posted by AlanR at 11:16 AM

What a beautiful morning picture! And the horns in the last picture are impressive :)

Nice set of reports, Alan I enjoyed reading these - and worra lorra nice pictures - . And wot fun, too. Whatever next, I wonder....?

Looks like a very successful and enjoyable trip, Alan. Where are you off to after Salford?

Thanks Maria, I was up just in time to get a photo. Another 15 minutes and it was gone.

Thanks Mike, Everything was just fantastic. Some more borders would do for me.

Martin,
The trip was fantastic. I am a borders convert. We was going up to Tyndrum wednesday but have put it off as Sheila needs to meet some friends from New Zealand on Friday.
So no plans. New shoes to report on coming soon.

Our paths crossed on the Stake Law traverse. I did a similar route, but in the opposite direction. The key to crossing areas like Whiteknowe Head is to follow the mountain bike tracks, for two reasons. Firstly, they all use GPS and will be bang on the footpath line and, second, it is comforting to know that someone else is having a far worse time!

I'm surprised those fires were legal. The smoke spread over a huge area. I'm glad to have taken the Drove Road, which is very easy between Peebles and Birkscairn Hill and was out of the smog.

Visibility was poor when I got to the Ettrick Hills. Very hazy, so it's good to see what could have been seen in your excellent photos. I think my next purchase will have to be a polarizer. Can't stand the things, but needs must.

Hi Zed, Thanks for your comment. Great weather for the trip.
regarding Whiteknowe Head, we had a gps ourselves but the path that is shown on the map to the west of the fenceline is almost non existant due to the vast amounts of peat groughs. We noticed the bike tracks on the east side of the fenceline, but this "path" is not shown on the latest OS map. It did look a good one too.
We only noticed this route when looked back across the glen.
We too thought the fires would be illegal. But they are landownres and that makes a difference. Doesn't it?
I didn't use a polarizer by the way.

Hope you enjoyed your walk.

Great set of postings of the walk Alan. Been reading Zeds walk. Great area to walk. Off to read Mikes and the others reports.

Thanks Martin.
I am in internet never never land at the mo so i havn't been able to read any other blogs. It's taken an hour to get this comment done at 10kbps!

Alan, just catching up on some blogs. A good series of posts on the Southern Uplands. I walked there last September- fine walking country, I must go there again !
Mark

Hi Mark,
Thanks for your comment. I really enjoyed the borders. It was my first time in this area and as you quite rightly say, I must go there again.