Wednesday 20th April 2011
I checked the web site to see if all was ok and there were no changes. Irlam 11.oo am, 8 miles linear to Cadishead. So it was a surprise to find that the walk was now circular and 11 or 12 miles and we had a new leader. (Had there been a coup i wondered). 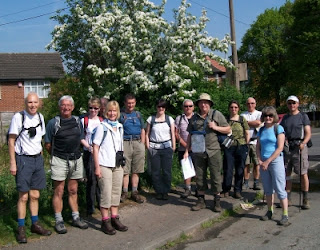 So the brigade assembled away from the rubbish aligning the station approach, for the ubiquitous staring into the lens for the mass cheese speech. (photo borrowed from LDWA EL site).

Off we went, singing merrily and was involved soon with a large Mexican wave performed in synchronisation with a bunch of school young adults. They were too old to be called kids.

It wasn’t long, as we plodded into rural england, that we were halted by Allan, who rightly spotted that we had gone too far down this lane and we should have turned off earlier. Never mind it all adds to the mileage. 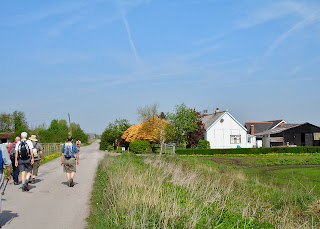 There were quite a number of wood cladded properties in this area which was a surprise and some very nicely manicured gardens. 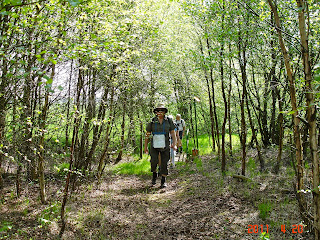 Here Allan was trying out his camouflage rig but it wasn’t going to work. His map was too big. 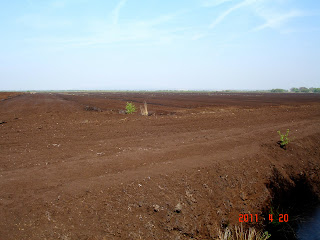 Onto the miles and miles of peat, which had been drained and raked ready for collecting and bagging. 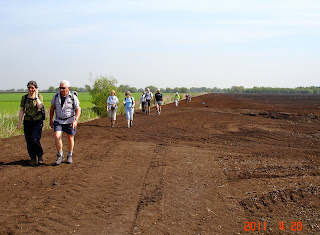 Lots of chatting along the peat resulted in another “track too far” . Somebody spotted the creator of the route and his buddy walking down a different course to the mass. Not to worry JJ decided to lead a mass trespass through a farm yard which would eventually intersect the original route.
We waited and waited but the creator was not to be seen. Oh dear we were worried. We thought we would miss lunch, but no, we sat on a wall and had a short break.
The missing 2 arrived 15 minutes later after the field with the path through had been subsequently ploughed over. 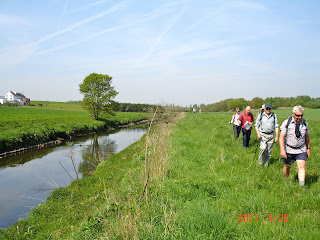 We joined the Timberland way and the route followed the River, or i should say “Glaze Brook”. 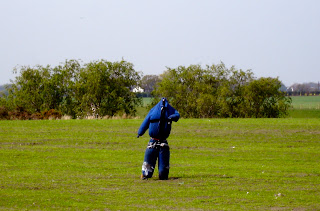 We thought we had found another stray but it was just a headless scarecrow. 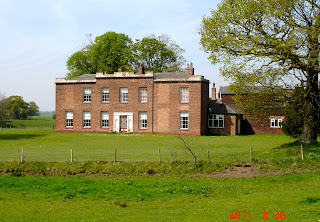 We passed High Woolton Hall in a sad state. looking neglected and in need of a use. 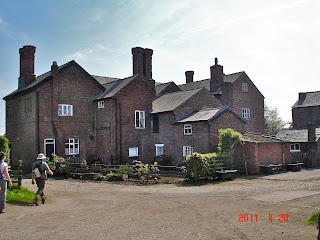 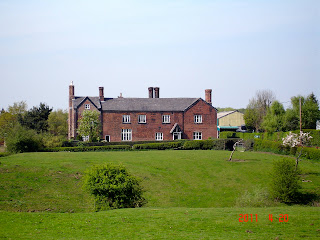 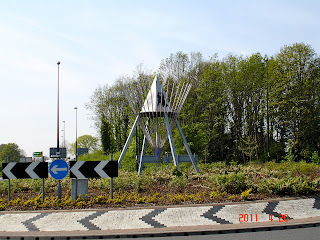 Once through Cadishead we found the A57, it wasn’t lost, we just found it there along with a spiky sculpture to the Steel works and Margarine works that used to employ the majority of folks in this area.
Now gone. 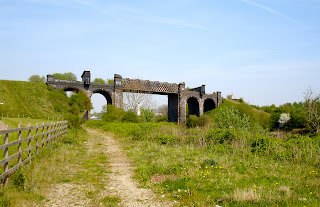 The nice walk alongside the Manchester Ship Canal towards Irlam passes the old railway line across the canal between Glazebrook and Partington and on to Altrincham and beyond.. 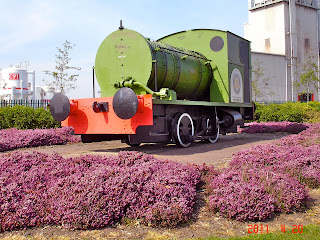 For those catching the train back, they would have to wait until Irlam station. This one was going nowhere.

This was a stunning walk, the peak of the trail i would say.
I will look forward to doing it again relatively soon when Martin B is back from his sojourns.
Thanks to the creator and the EL LDWA for the company.

Distance 11.1 miles. Including a couple of minor detours of course.

Some more photographs can be found here.
Posted by AlanR at 1:17 PM

There's been a lot of walking during the past week, Alan! :) But we need to enjoy it now that the winter is over. I'm currently packing my backpack for my first overnighter of the spring...

Nice one Alan. I look forward to joining you on a re-run in a few weeks time

Martin,r
It was really nice. I will look forward to doing it again. We must arrange it when the girls can make it.

Maria,
Yes quite a lot of walking recently. It's the good weather. We are looking forward to your trip report soon.