My first book review ever on the blog.
Because i have been a bit invalided recently and as i reported in my last post, i have had a bit of spare reading time. I picked up a book that would not normally be on my reading list. Now that i have finished it i am so impressed that i thought it worthy of a mention here.
The book is The Favored Daughter by Fawzia Koofi. 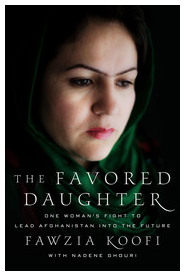 Now when i first picked this up i thought it was a woman's read and almost put it down. Am i glad i didn't.
If like me your stance on politics is quite on the periphery then your views on why our brave soldiers are dying in Afghanistan may be like mine. Bring them home, Afghanistan is not worth all this death. Why are we there!
My oh my, how my opinion has changed after reading this true story of the oppression of people especially females within that country and the struggle to bring a settled life for these beleaguered, tough, proud people. But also what crept into my cranium was just how little our own government are actually telling us, the general public.
I don't understand why we are kept pretty much in the dark.
The favored daughter is a story from birth of a female born to a member of the old parliament. She was the nineteenth child born into a family where the father had seven wives and all together twenty three children. The first thing that doesn't strike home with us in the west is this sort of life but it is normal in Afghanistan.
That's just one of numerous events that happen that we in the west will find appalling but i don't want to spoil the read by giving too much away.

The poor female child was born and left out in the sun, alone to die, but she survived and also lived through much adversity. She has now become speaker of the house in Parliament under the Karzai government. A woman with that status within government is highly disliked by many tribal leaders, men in general and especially the Taliban.
Her life is constantly under threat and has had numerous assassination attempts. Her aspirations are to run for President.
Having read the book we must never give ground to the Taliban and we must never negotiate with them because what we would have to surrender during negotiations is unthinkable when the joint forces are trying to bring peace and some sort of democracy to the people and losing lives in that battle.

It isn't an easy task to achieve, many have tried and failed but to leave these people to the fate of the Taliban would be a crime in itself.
Have a read of the book and see if you agree.

I tend to agree with you Alan - we mustn't forget what's at stake here - although like you I've often found myself shouting at the radio: 'bring the troops home'. Must read this book when I get through all the other books I've said I 'must read' this year, although I could push this one up the list.

sounds like a interesting read. Having worked with people from this area and iraq for the last half dozen years I can only say its complicated and that most of them would agree with you, and also with the argument that we shouldn't be there. I'm not sure any of our previous invasions of AFG were neccessarily to protect the people from themselves either. Its usually about resources and not people. But I'm glad she's in the running. Incidently our forces have been working/negotiating with local Tabil leaders on the ground for some time. Its a bloody mess.

Sometimes you find a book that you just cannot put down. Like The Last Wolf you put me onto last year. They both opened my mind to a reality that i hadn't considered before.

You will certainly be aware of why we shouldn't negotiate with the Taliban better than I.
If we do negotiate with them as a means to pull out then everything that's happened over the years will be meaningless and a waste of life.
Although i gather from the book that the average local doesn't really want the joint forces there, they do realise that it would be worse if they were to pull out leaving the country with Taliban law.