Robin at blogpackinglight put me onto the Exped Downmat as a possible purchase. After quite a lot of investigating I eventually picked the Exped Synmat UL 7 which i consequently bought recently and posted about it.
The mat has inbuilt synthetic insulation and Exped recommend that you don’t inflate it with your own damp breath as this could condensate in the insulation.
Robin purchased a pump bag and a separate schnozzel from Unterweg in Germany and i was going to do the same.
I searched UK suppliers of Exped goods but as far as i could see nobody had stock. I then checked out the Unterweg website and i found that Exped had released a new inflator which consists of a lightweight dry bag with inbuilt schnozzel. It was also much lighter than the previous separate schnozzel and bag by quite a margin. 208gr against 70gr.
Again i searched the UK to no avail apart from Hitch and Hike who said they were getting supply in May.
Cutting the story short i ordered one from Unterweg who had stock and a quick door to door service.
Cost €20 and €13 postage.

Here is the video of how to use the pumpbag.

What was also a surprise was that the pumpbag was supplied in a map case instead of just a throwaway plastic bag.
I do have a very good Ortlieb map case so i don’t need another one but it’s a nice size case and so i think i will use it at some point. 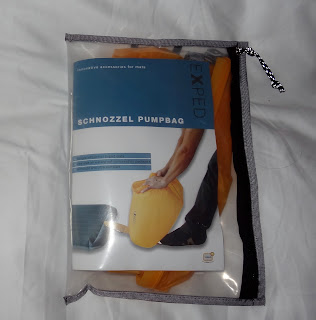 Exped Pumpbag as supplied in a map case.
The bag itself doubles up as either a rucksack liner or as a drybag for something like a sleeping bag but for me i think it’s a bit on the large size so it might become my rucksack liner.
It would make a fine pillow.
Time will tell what it ends up as.
Posted by AlanR at 11:30 AM

Hi Alan,
When Robin posted about his new pumpbag, I was a partially impressed with the idea, and partially skeptical because of the weight. Now 70 gr make it really interesting.
Do you think the material is tough enough to be used as a pack liner? On the video, it seems to be almost transparent. On the other hand, the Synmat UL is also almost transparent... And, of course, it can be used as just a dry bag for sleeping gear...

Well, today a friend of mine in the retail trade gave me a brand new Exped Downmat UL. Included is the new pump sack. Mine weighs 63g. It's easier to use than the shrink bag and so will be a perfect mix and match between the Synmat and Downmat UL. It's a bit of an understatement to say I'm pleased.

Hi Sergiy,
Like lots of lightweight backpacking gear you have to respect that it is lightweight. I would say yes it can be used as a liner or just a drybag for down gear etc.

You lucky lad. I could do with friends like that.
My pumpbag also weighs 63gr. but i published the weight as per Exped literature simply because i thought i might have been fortunate to be under.

i would consider selling the Shrink bag and schnozzle now.
I think the idea of having drybags with a deflate valve is great.

I've been looking for one of those too, and it has proved tricky! In the Synmat literature (not that there was much) it suggests forcing air into the mat using a hairdryer on cool. I've yet to work out how I'm going to do that as I trudge across Scotland next month...

Louise,
If you have a dynamo on a bike you could generate enough power from it to fire up a 12 volt hairdrier. Only thing is ! have you enough room in the rucksack for them both.

Alan, that's the problem with buying last year's model, there is always something better on the horizon. I have the Exped mini pump for my Synmat UL7, but it takes a lot longer to inflate than this. I suppose it does weigh around 20g less - but I think another few grams to save a lot of arm ache at the end of a tiring day is worth it. Dam another thing to buy !

Hi Mark,
I know, it’s difficult to draw the line sometimes.
The video is bob on. I have the large mat 2m long and it is inflated in less than 3 goes.
I have also tried it as a pack liner and a dry bag and i prefer it as a drybag. Segiy mentions did i think it was ok as a pack liner and i said yes. I still think i can be used a pack liner but i now think it is not worth taking a chance and possibly holing it. A drybag it is then.

Alan will it pump up other makes of mat, or does the valve just fit Exped?

I got a similar product (the Big Agnes Pumphouse) a couple of years ago and used it as my sleeping bag stuffsack for a while. It saved me much dizziness when pumping up my NeoAir. Then, in a burst of gram-cutting one day, I ditched it in favour of a lighter stuff-sack and the dizzy method of inflation (breath not being the enemy of the NeoAir). Every now and then, I do wonder about going back to it.

I would guess that it will only fit Exped. I havn't seen this valve on any other. What mat do you have Greg?

I have now decided to use it as my down jacket dry bag so in comparison to a medium exped drybag there isn't much in it weight wise.

Neo Air and Pacific Outdoors Ether Elite. Neo air I find far better. Dont seem to be able to stay on the ether.

It won’t fit either of them Greg.
Funny, i am the exact opposite. Can’t stand the Neo Air but like the POE.

I took delivery of one of these Schnozzle bags last night to use on my Synmat UL. The Synmat is very comfortable I must say, so impressed with that. The only downside I can see with the schozzle bag (I was testing this last night in my lounge inside my erected Hilleberg Soulo, much to the pleasure of the wife!) is that when you are trying to operate it inside a tent in close quarters it's slightly awkward, but it's still possible to fill the mat with air successfully, you just need to be patient (and a bit of a contortionist!) Other than that it's all good. I did think maybe that using a pump pillow when inflating the mat in a small tent may be a better and more manageable option. Just an idea :-)

Hi Lewis,
I have a Tarptent Moment so i know about small spaces. Basically i stand in the porch area whilst filling the bag with air, standing on the loop at the bottom of the bag. (Like in the Exped video).
It only takes 2-3 bag fulls to fill my UL mat. So i find it ok and not really a hassle.