Home to Manchester on the Rochdale Canal

We had been talking of walking this towpath for a while as Dorothy hadn’t done it. Sheila and I had walked it a couple of times and although some of the scenery is a bit run down and you can meet some strange characters on route we decided that the forecast was reasonable to do it today (Saturday 27th July).

Just as we were setting off, in fact i had the key in the door lock, it started to hail stone, we waited. It was quite dark and the only good point was that it seemed to be brighter in the south, our route. Ten minutes later and with just light rain we set off wearing our waterproofs.

As we progressed, we met lots of dog walkers and we seemed to be saying ‘Morning”  every few paces. We were nearly run down by bikers who seemed to get pleasure from sneaking up on walkers with their hoods up, unaware that they were only a few feet away. Get a bell or something, how hard can it be.

It was getting brighter and although rain was still gently falling it looked like our over trousers at least could be removed. As it happened we left them on, which turned out fortunate because very soon rain was pouring. I decided to put my jacket in the rucksack and just walk using my GoLite brolly. I was a good decision. I didn’t get wet and it was pouring for a good half hour.

I thought i had put the camera in the rucksack but then remembered i had left it on the sofa whilst we were waiting for the hail to stop. What a nuisance, that meant we only had a 3mb phone camera with us  and not a full battery so the photo’s are few i’m afraid and a bit grainy.

It was good to see that as we passed Failsworth that the canal cleanliness was reasonable. The last time we passed it was full of shopping trollies, fencing, road cones and other detritus. Pretty horrible stuff.
The rain eased of and blue sky was starting to break through. Still quite humid.

There were quite a few places where the canal bank had subsided due to the heavy recent rains we presumed. Although the water board had fenced the dangerous towpath sections off the local brain dead had decided that the best places for the steel fencing would be in the canal blocking a bridge to narrow boat traffic. A mile or so further down we had a chat with a couple who were negotiating a lock and told them about the problem ahead. 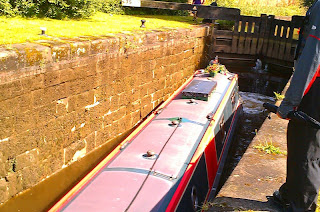 Lots of wildlife was to be seen and included the usual Canada geese, swans with Cygnet, Mallard, Pied Wagtail and for the first time here we came across a city fox that was quite comfortably sunning itself and wasn’t a bit bothered that we were there.
One of the lock gates had a moth resting out, we did well to spot it. 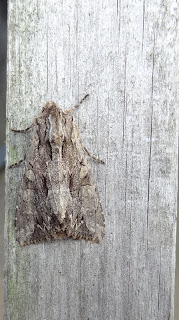 It was an improving weather situation, the sun was out at last and made the walk much more of a pleasure. Mum and Dad were quite proud showing off their cygnet and never made a fuss as we approached for a closer look. 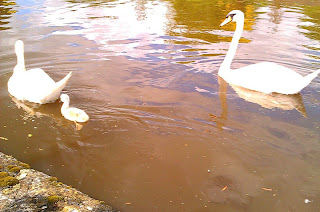 The tall buildings of Manchester were getting closer and Dorothy was finding the mileage a bit of a struggle at this point. We had walked about 7 miles and there was about 2.1/2 miles to go before we got a coffee in town. We passed a chap sat at the side of the towpath with a 2L bottle of Strongbow cider, 1/3 rd empty. He wanted cigarettes which none of us had and he was asking if we did mountaineering.
We didn’t stop to converse. 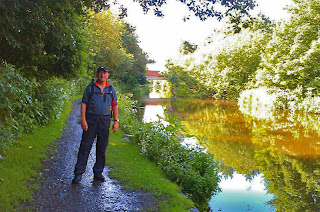 The basin between the Rochdale Canal and the Ashton canal was under rejuvenation the last time we passed here. They have obviously spent a lot of money because it was very run down. It now gives narrow boaters a nice place to moor up overnight. Close to the city centre. 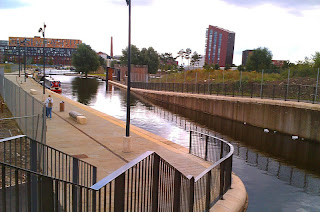 The bridge we were standing on for this shot was also new and very good design. We should have taken a photo of this as well, but didn’t. I looked on the internet for one but couldn’t find anything.

The old mills were looking resplendent now that the refurbishments were completed and the whole area  is on its uppers as new bridges have been installed, new apartments completed, new mainstream retailers installed and if only they would do something with Piccadilly Gardens  to make it look as
good. It is a horrible place at the moment, city planners should be ashamed at how they destroyed what was a lovely area. 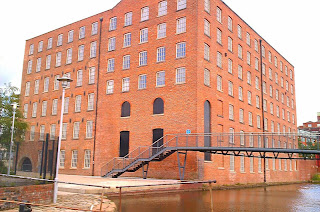 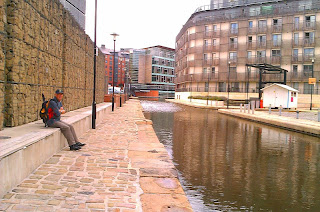 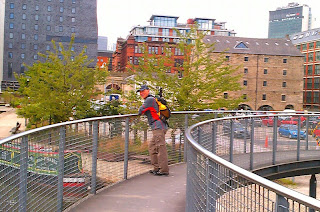 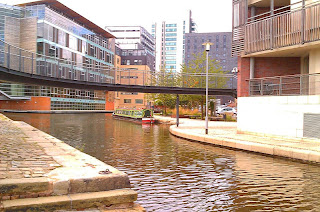 It was now time to find Dorothy a chair, she had done well and deserved a break. So before retiring to a certain Joseph Holts establishment for a well earned beer we called in to the first cafe we came across for a quick snack and a coffee. Yours truly in the Ape and Apple.

Walking back through town to the bus station we passed this renovated old Morris van. It was causing quite a stir from passers by. 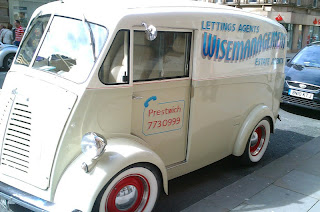 We called in to the Rohan shop on the way back too. They had a bit of a sale on and obviously we couldn’t walk past without seeing what was on offer.
More to come on that one later.

All in all we did about 14 miles and had a smashing day out.

Because They're There said...

Enjoyed that. I steered a narrowboat through there a few years ago in torrential rain, though we did have a good meal out in the main basin. Canal walking makes a welcome change from hillwalking. I must make a note to do more of it.
Cheers, Alen McF

Thanks Alen,
Canals are interesting places to walk and the scenery varied,
but i need to get into the hills next.
Manchester has improved so much over the last few years with a diverse culinary culture. We never get bored of going into the city.

Great read. I cycle to work every day along the Bridgewater into the City Centre so could relate to it. Totally agree with what you say about Piccadilly Gardens, by far the worst part of Manchester yet it should be the focal point. It is amazing what they have done with the central eastern part of Manchester, cycled along part of that area doing the Skyride a few weeks ago. The canals are great hideaways and natural routes for the wildlife around the city. I often cycle past a huge Heron on the bridge at Stretford where the canal crosses the Mersey and it just sits there a metre or two away from me and doesn't move an inch. The Canada Geese are highly under rated residents, they are lovely creatures and there are hundreds of them all over the city along the canals.

Thanks Jamkie,
They (Canals/rivers) make a nice change if the weather is dour and the hills covered. I'm back up in the hills this weekend but have another canal trip in the offing soon.

Your web page is superb by the way.

The canal walks look lovely. Unfortunaly we don't have many possibilities for that over here. The Morris van looks superb!

But your lakes and forests are stunning. Yes the van was quite an eye catcher.