Todays walk (Tuesday July 10th) follows the Rochdale Canal from Todmorden to Smithy Bridge.
Checking out the transport arrangements last night brought about a change of plan. The railway line through Walsden was flooded and no trains were running. No estimate could be given for resuming normal service.
This resulted in 2 buses being needed for us to reach Todmorden. The no. 17 to Rochdale and then the 589 Halifax bus which goes through Todmorden. It was a bit tight for times as the 17 arriving in Rochdale gave us about 3 minutes to locate the 589. We just made it.

Alighting right on the canal side, the heavens opened and straight away i was diving into my bag to don overtrousers. Within just a few minutes we were soaked.

Starting off at the unusual Guillotine gates or Library gates as they are also known. 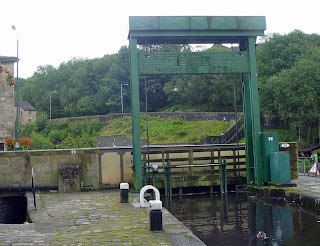 The gates were built by Wilde and partners to allow longer vessels to pass through the lock system which were restricted by the original mitred gates.
The cobbled towpath was very slippery, care was required under these torrential conditions.

Rounding the next bend the Great Wall of Tod fills the view. Above this is the Manchester to Leeds railway. I have heard a couple of stories that either it took 4 or 5 million bricks to build it. I didn’t have time to count them - sorry. 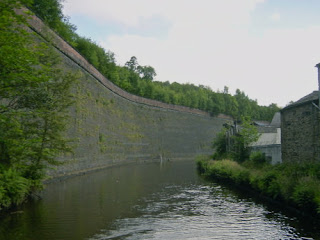 The weather was getting very heavy. My trail shoes were like paddling pools and making odd noises as the water was squeezed out from the mesh as i walked. It was unfit to get the camera out and so initially photo’s were limited until we got beneath a bridge. 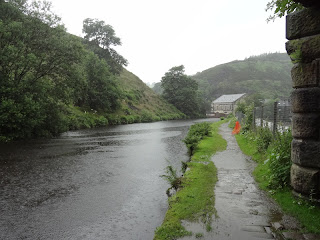 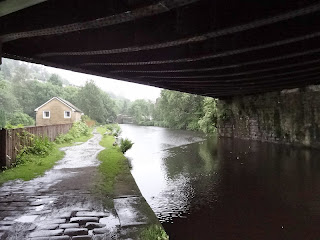 Hebden Bridge and Walsden would be in for more flooding today that was for sure.
The towpaths which had been repaired fairly recently were flowing quite well and deep puddles had formed at regular intervals. I think some drainage is needed to be put in as well as the tons of grit.

The Skew Bridge at Gauxholme is another unusual structure. Being built across the canal at such an acute angle and also castleated with towers. At this point a train passed, so they must have sorted the flooding out. 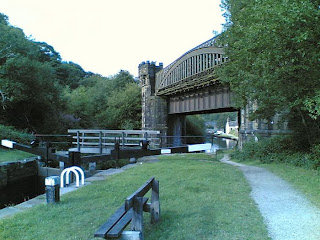 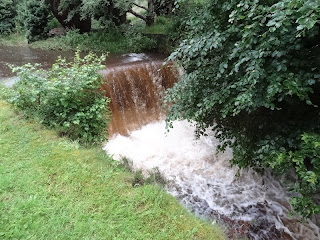 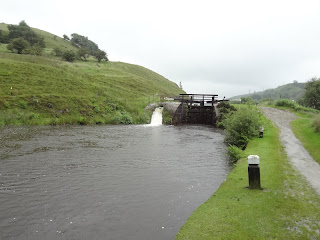 The many overflows were today in spate and carrying peat down from the moorland surrounding the canal had made them even browner than normal. 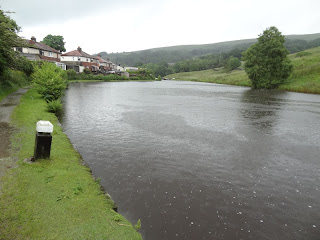 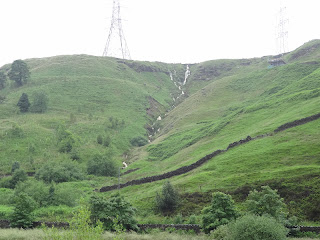 Waterfall from Owler Clough. Showing how much rain has fallen. 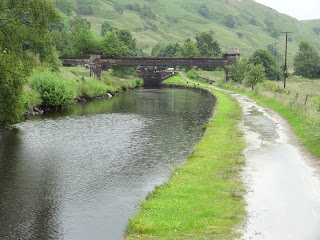 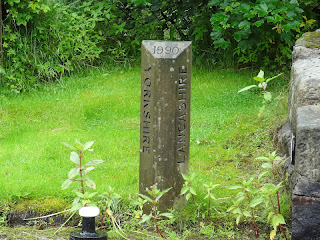 The county boundary stone at Warland. Strangely, as we entered Lancashire the rain eased and then stopped for about 1/2 hr. 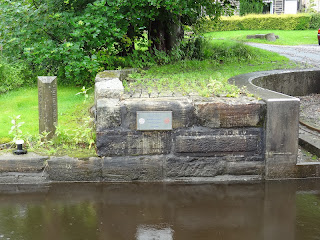 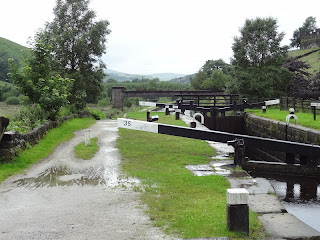 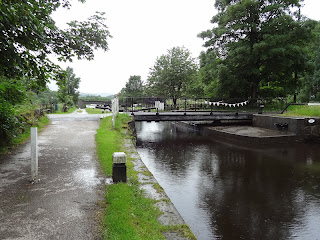 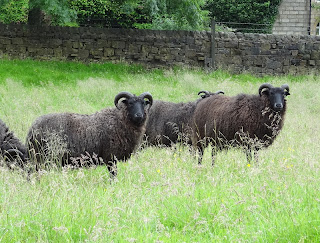 We were being kept an eye on by these Black Welsh Mountain Sheep. (I think that’s the breed anyway). 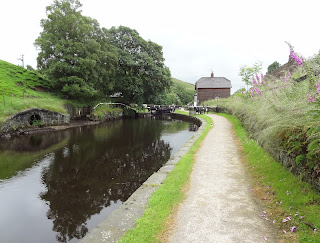 Approaching West Summit lock (37)  and Chelburn Bridge. I was getting a bit peckish at this point and seeing that the Summit Pub is just behind the lock keepers house we thought it would make a fine lunch stop.  The locked doors unfortunately turned us back onto the tow path. 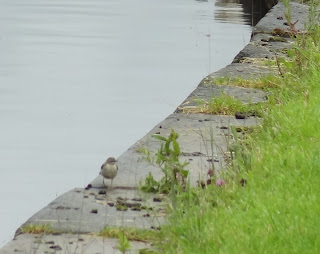 A Yellow Wagtail had followed us for a couple of miles. But every time it was close enough to get a photo it took off. I just managed this one. 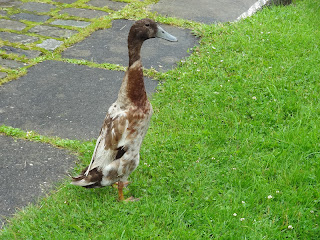 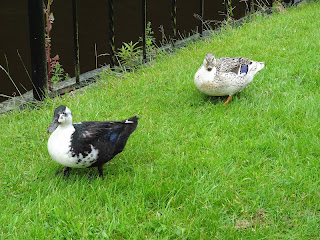 Some feathered friends looking for an easy meal. So were we. 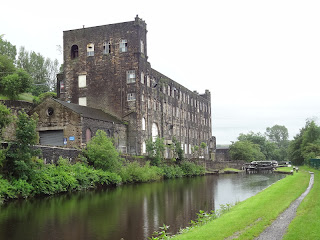 We passed by Sladen Mill weaving sheds on our right as we approached lock 41. It was sad to see Rook Nook Mill on our left, now disused and vandalised. 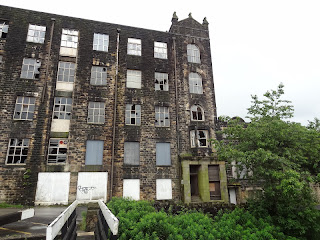 Rook Nook Mill was built in 1886 and was originally the home of Fothergill and Harvey who produced textiles. They made the first khaki drill uniforms for the services. Some further information and photographs of the interior can be found here.

We headed into Littleborough for lunch. The first pub we came to only did food Thursday to Sunday. The second pub The Wheatsheaf was doing food. This pub has been refurbished and has a young and enthusiastic couple running it.
It was our first time in the pub and i must say it was very pleasant and good value for money.
Homemade Chicken curry with rice or chips or both. With a nan bread. 2 meals for £10. Excellent and plenty of it. John Willie Lees bitter was £1.95 a pint. and was also in excellent condition. Well done to the Landlord and Landlady. 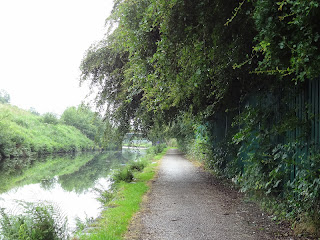 Lunch over and with the rain abated we carried on for another mile or so until we came to Bridge 53, approaching Smithy Bridge. The good reflection gave a photo opportunity. 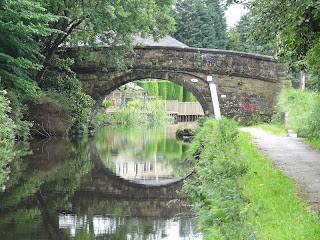 Smithy Bridge Railway station. Unmanned and our journey end for this walk. 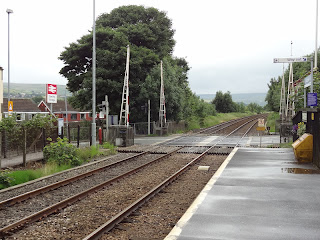 It was a shame that most of the day had been walked in some heavy rain as the landscape is particularly beautiful. It would make a lovely walk on a nice day and without a doubt one that we will do again when/if we get a summer. There are lots of interesting lock systems and equipment from days gone bye, old stone buildings and bridges that i would have photographed if only it had been fit to get the camera out.

Canal walks are some of our favourites; particularly midweek and out of season when the paths are quiet. A couple of things we've noticed this year are that the heron population seems to be doing really well and that even the canal towpaths - usually very well drained - are turning to sludge, meaning the need for a bit of extra care in places.

Byeways.
Yes the canal walks i find very interesting and that makes up for them being flat.
I never get bored because of the history all around.
We have only the small section between Smithy Bridge and Rochdale to do and then that waterway is complete.
Maybe the Ashton or Leeds Liverpool next.
On this walk we only saw one Heron but we do see quite a few usually as you say. The weather may have put them off. Ha

Oooh I likes a nice walk or ride by t' river I does.

Might have to cycle to Ely this weekend.
If it does not rain, and there is no gardening to do and... (list of jobs!)

Probably won't be many hills on either side though.

Hi Andrew,
If it does not rain. Yes, well! If you wait for it to stop you will never go out.
The garden will still be there when you come back.
Go on you know it makes sense.

It's a nice wander along that canal, have done it na few times. There are some good routes on from Toddy to Hebden Bridge as well, high and low level routes....

Went out with dog tonight.
WET...but it isn't cold wet so not really a problem.
The grass in the garden is now too long to cut anyway.
Best to wait for a drought I reckon.

Hi Howellsey.
Yes, like you say, its a nice change especially with the weather, to do a canal walk.
We have done the canal from start to finish now except for the bit from Smithy Bridge to Rochdale which is only a short stroll.

What an enjoyable looking canal walk!

It seems that summer is cancelled - or postponed? - in many areas this year. We still have a cool undertone in our weather despite it's mid July. I have been able to wear shorts on a handful of days, but still prefer long sleeves!

Hi Maria,
It's 10pm and its dark here. It's like late autumn instead of summer. We have sat out in the garden on only a couple of evenings. So depressing. We are going to do the canal walk again tomorrow because Sheila was working and missed it. The forecast is for a better day so fingers crossed.

I don't know the area of course, but it looks very interesting with the history and all - and the photographs helped me get a feel for the place.

Hi Gibson,
Good to have you back.
Yes, its my favorite section of the Rochdale canal. Sheila couldn't get the day off when we did the walk and so we (Sheila, Dorothy and i) did it again on Saturday when the weather was lovely. I have a few more pictures which i will post very soon.